And the first word was "false"!


Actually, I do not like to rewrite articles taken from somewhere. Usually I do it differently. I select material from various articles and monographs, then I work on it. But in this case, the work will be purely journalistic. That is, in your own words to retell someone else's text, close to its content. Cause? The reason is that the text and the ideas expressed in it are very interesting and up-to-date, and are closely related to the topic that caused a lively interest in HE: who are we and where are they from? Unfortunately, this topic arose spontaneously, therefore, it started not from the beginning, but somewhere from the middle of what we call “our history". And now during the discussion of my material "... We are all from the same ship!" The voices of those who asked: what was there before, and what about Finns, Chukchi, Indians and Aborigines of Australia sounded (and rightly so!) 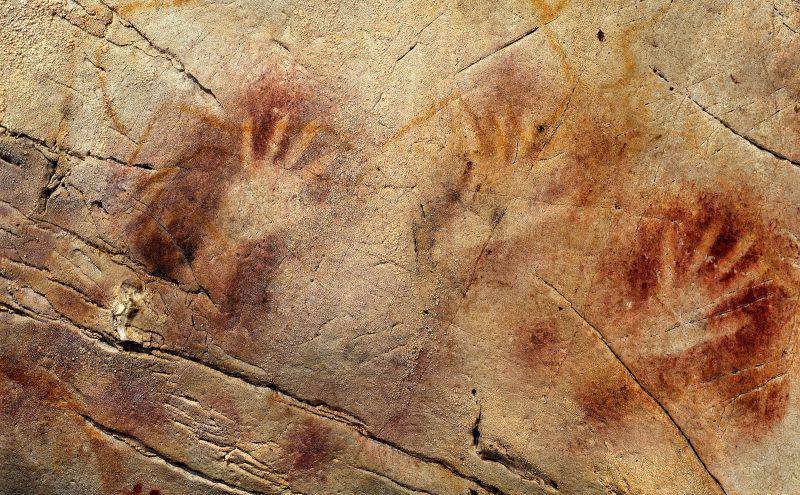 Here was a yg! Stone age autograph. People do not change…

In this regard, many became interested, but where did we come from: from the constellation of the Dragon or from Africa? And the analysis of haplogroups precisely indicates this continent as the homeland of mankind. But how did we "come into the world" - that is the question? How did you become naked, upright and ... talkative? And whether labor created man, if ... if human beings are by nature lazy? It is clear that the theory that explains all this should meet certain requirements, right? First, rely on the achievements of modern science. Secondly, be consistent. Thirdly, to allow verification by genetic methods and take into account the peculiarities of human psychology, by the way, has changed little over thousands of years. As you can see, Darwin's theory does not really fit this set of requirements! And most importantly: its basic statement contradicts it: “labor created man from a monkey!” What kind of work, when we work only out of necessity, and so would have been glad to do nothing at all! Yes, we work, and we work like horses, but then again, in order to later lie on the sand somewhere under palm trees and so that everything is included. There are probably exceptions, but I have never met them in 60 years!

And here I was just lucky. I read an interesting article on this topic in the journal ... Popular Mechanics, where they have long been writing not only about mechanics, as well as in Science and Technology, which is published in Ukraine and where a lot of interesting articles on history are published. And I am very glad that I can present here the presentation of this article with some additions from myself, not only as a historian, but also as a teacher in the public relations specialty - it turns out that there is a direct link between PR and the genesis of humanity.

So, in ancient times, around 3 million years ago, it was in Africa, in Southeast Africa, that a very favorable set of environmental conditions developed. The warm climate, flat terrain and many reservoirs, which were found in delicious clams. And in this area there were great apes, which, like all primates, faced one problem. Protein hunger! Modern portable video cameras in the wild have shown that chimpanzees kill birds, steal eggs from nests, and even use small sticks to kill small antelopes, so that later ... they can eat their meat. They need protein, because they have no problems with carbohydrates. 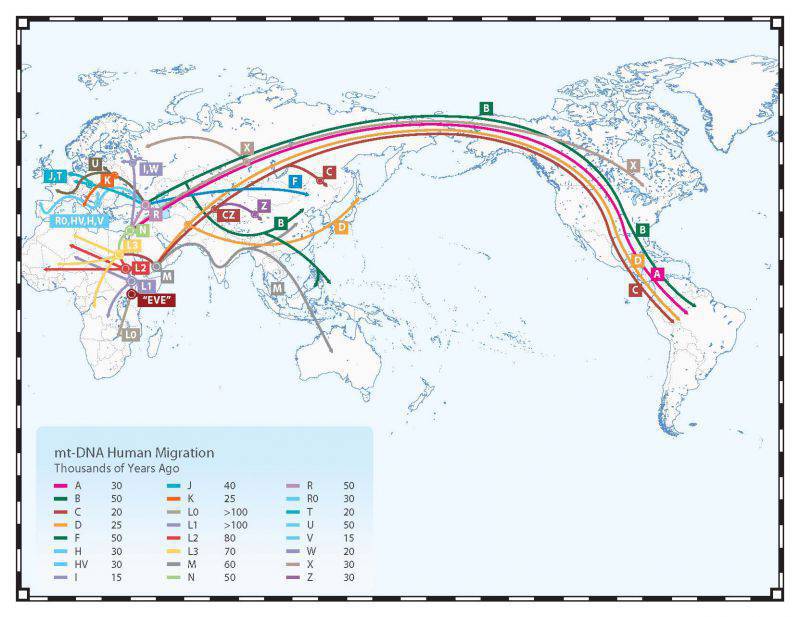 Migrations of ancient haplogroups. The numbers on the right are ages in thousands of years.

In this sense, our ancestors were very lucky. Shellfish! Get in the water, catch and eat! But ... on all fours you will not go far, and you will not catch much with your mouth. That is, the advantage in reproduction - and reproduction is the main goal of human life, like any other biological creature on earth - got those who ... faster than others got up on their hind legs! They went deeper, got more, ate more, and therefore more often multiplied and passed on their genes (and skills!) To their descendants. So over time, people became erect and lost hair in the same way. After all, if all the time soak in search of food, then not catch a cold for long. There were no hospitals then - caught a cold - got sick and ... died! His genes are not passed! But those who had not so thick wool, got wet less, got sick less and more often, and reproduced more effectively!

At the same time, they worked a little. How? Smashed the shells of caught mollusks with stones! Such primitive choppers were found in the named region, as well as the broken shells of mollusks and turtles. That is, yes, people worked, but, as now, they did it out of necessity. And for the most part lay in the shade under the bushes and ... multiplied, combining business with pleasure!

Yes, but how to persuade the female to breed in the conditions of abundance of food? It is clear how in hunger! But when there is a lot of food, you just need to go into the pond and climb a little there. My students (oh, these students!) Sometimes answer this question this way: to show her ... What is clear to show! But ... it did not work on people in this era! Everyone was "naked and happy." Of course, force coercion was not excluded. But ... it was much easier for the female to simply ... "persuade"! That is, to show her with signs and sounds that you are not averse, that she is “the woman of your dreams” and that the most important thing is that she lay in the shade under a bush, and she will lie, and here he is Ыg, Hug, Ug, Ryg, Mug - bring her delicious food! That is, the basis of most of the actions of people was lazy. It was lazy to look for food itself, well, let him bring, and I will give him! And this is how the speech was born - from the sounds with which our great-great-great-ancestors lured each other to “sparring”. At the same time, the most important thing should be noted: the very first word spoken (conditionally, of course, it must be understood!) Was ... FALSE! Because the man, of course, promised the woman more than he could actually do. He promised her many, many tasty foods, shells and snails, but ... always did less than he promised! This is the case today! That is, PR was born with people!
That's how our ancestors just became naked, upright and talkative! That is, people!

And then there was another climate change! It became dry, the ponds with clams dried out, and you had to live in the savannah and somehow survive. People here found a way out and broke into tribes. And they began to share food with each other and it was through this that they retained their kind. However, here they had a problem. In his famous novel “1984”, George Orwell wrote that since the Upper Paleolithic times people have been divided into three groups - smart, medium and stupid. And again this is indeed the way it is, and we all know it very well.

And here is the question: in the difficult conditions in which our ancestors found themselves at that time, which of these groups had the most chances for survival? Of course, the middle ones! Yes, yes, they are average "terpily", they are all ready to endure, overcome, but "to be like everyone else" is their ideal! Stupid at the time was the hardest. Violated the unwritten laws of the tribe, got a club on the head and ... you ate! Therefore, their genes are transmitted to descendants in the least. But there were problems with smart ones, often there was nothing for them, but they didn’t want to “be like everyone else.” And what did those people have to do? Banish your restless kinsmen! There were many tribes. From one expelled, from the second, from the third ... The fugitives met, stole their women, multiplied, formed their own tribe, and they had the same problems. Stupid spruce - smart expelled! This is how natural selection went, not for wool and long legs, but for intelligence! And the people (and they became more and more!) Went farther and farther, and at the same time they became smarter. 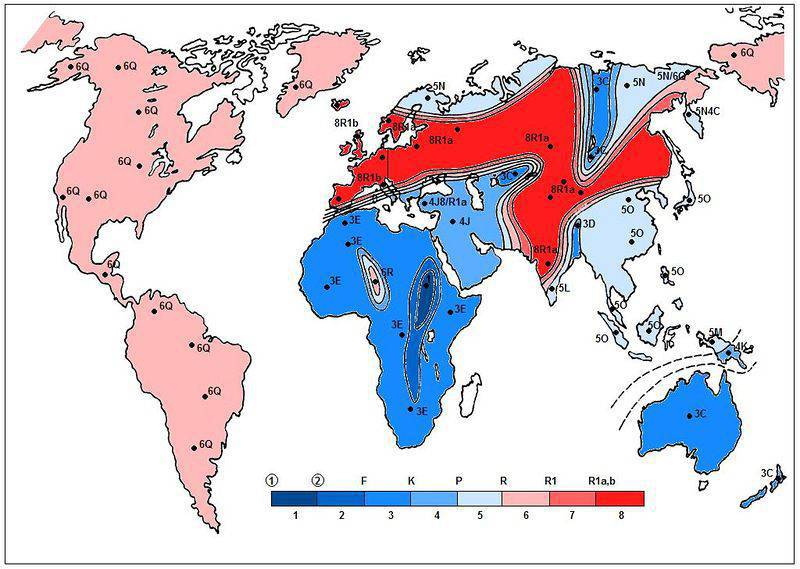 Gradually they mastered the whole earth. They invented an ax, a spear, a harpoon, a net, a raft, a boat, a sling, a bow, and ceramics; they learned to use fire and paint caves. Food has now become a lot! The stupid have stopped killing (the stupid wife has become even a value!), The wise have become leaders and priests and ... the biological progress of humanity, alas, has stopped. The brain stopped growing and, moreover, the mental faculties also began to decline. For example, the memory began to weaken. Why strain it - after all, there is Google. With the logic it became bad - again, why strain your brains when everything is in books and on the Web, and also “you can ask Masha”. So, mentally, humanity today has been degrading and degrading for a long time, since the first cities appeared on the planet, that is, 10-7 thousands of years. But this is nothing on a common historical scale, so do not be particularly scared.

That is, in accordance with the “Pareto law”, the trend, the vector of human development has changed: if earlier there were 80% and 20% with a plus sign, then now the same indicator with a minus sign. But thanks to the development of science, technology and modern media, these same 20% can do much more than the other 80, so the total degradation of humanity is still not threatened!

Ctrl Enter
Noticed oshЫbku Highlight text and press. Ctrl + Enter
We are
Reservation. How US Indians survive and try to fight for their rightsGenocide of the Aborigines of the New World
Military Reviewin Yandex News
Military Reviewin Google News
90 comments
Information
Dear reader, to leave comments on the publication, you must to register.