Ukraine - Poland: friendship on the ground of NATO 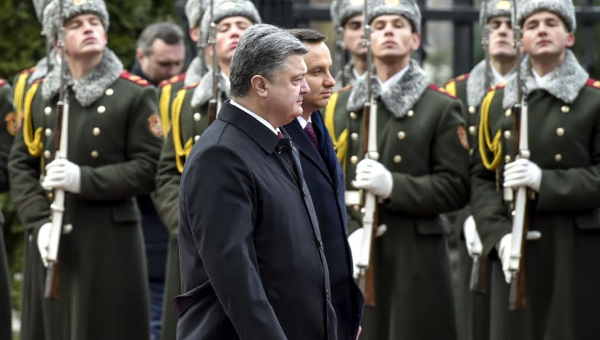 During the visit of the Polish delegation led by President Andrzej Duda to Ukraine, the parties agreed to "restart the consultative advisory body between the countries at the highest level" and signed documents on the formation of a union under the auspices of NATO.

The leaders of the two countries also discussed the issues of "energy security" and agreed to open a credit line for 1 billion euros.

Poland is ready to develop cooperation in the military-industrial sector and joint military exercises, and also favors the presence of Ukraine at the North Atlantic Alliance summit in Warsaw in July 2016.

"Poland will be the host of the NATO summit in 2016, and I would very much like Ukraine to be present at this forum so that its presence is unequivocal. And I think this is a significant issue from the point of view of not only Polish-Ukrainian relations, but also the position of Ukraine in the field of security in our part of the world, "said President of Poland Andrzej Duda on December 15 at a press conference with President of Ukraine Petro Poroshenko in Kiev.

In turn, Poroshenko said that Ukraine will take part in the military exercises "Shield" in Poland.

The Minister of National Defense of the Republic of Poland Antoni Macerevich and the head of the Ministry of Defense of Ukraine Stepan Poltorak signed the Declaration on the further development of bilateral cooperation following the talks in Kiev on December 14.

“I want to state our readiness for joint exercises, which are already taking place in the framework of Polish-Canadian-American cooperation in Yavorov. We are striving to develop it further, as well as cooperation in the military-industrial sector,” said Matserevich.

Poltorak noted that "we received both political and logistical support."

In addition to Poland, Ukraine signed defense cooperation documents with the Baltic countries, which would also legitimize the receipt of military assistance from these NATO countries in the context of NATO’s reluctance to intervene in the Ukrainian crisis, and through Ukraine’s bilateral contacts with NATO countries.

Recall that in September 2014 of the year, an agreement was signed on the establishment of the multinational Polish-Lithuanian-Ukrainian brigade LitPolUkrbrig, which was signed by the heads of military departments of the 24 countries of July and is currently being formed.

It is assumed that LitPolUkrbrig will be used to participate in operations under the auspices of NATO, the EU and the UN. The main tasks of the brigade will be participation in international efforts to deepen regional military cooperation and create the basis for creating a special NATO combat group on the basis of the brigade. From Ukraine in the brigade will serve 545 military personnel, from Lithuania - 350, from Poland - to 3,5 thousand people.

Poland is becoming one of the important locations for NATO command and control centers, including the existing base of the NATO Corps in Szczecin. The decision to form the NATO Superfast Response Force in Eastern Europe was taken at the Cardiff Summit in September 2014.

It is significant that, in parallel with the visit of the Polish delegation, NATO began to introduce in Ukraine the practical stage of trust funds for logistics and medical rehabilitation in December of 2015.

During the talks in Kiev, the Central Banks of Ukraine and Poland agreed to open a credit line for 1 a billion euros, President Poroshenko said at a joint briefing with President Duda.

In addition, Poroshenko said that the Polish government will provide Ukraine with 100 million euros to create joint checkpoints at the border. The relevant agreement was signed in September, but so far the issue has not been resolved in practical terms.

According to DW, economic disputes in bilateral relations have not yet been resolved. At a meeting with Prime Minister Yatsenyuk, the President of Poland called on him to step up the fight against corruption, “against which Polish businessmen often complain,” and called for solving the problem of returning VAT to Polish businessmen.


Along with this, less than a week after Vice President John Biden asked the President and Prime Minister of Ukraine to reconcile, "the hidden war between the teams of Prime Minister Arseniy Yatsenyuk and President Petro Poroshenko suddenly entered a public and comically acute stage," Bloomberg writes. "If this crisis continues to develop, another revolution could begin."

In the future, Ukraine is ready to buy from Poland up to 8 billion cubic meters. meters of gas after an interconnector is built between the gas transmission systems of the two countries, said Prime Minister of Ukraine Arseniy Yatsenyuk at a meeting with President Duda in Kiev on December 15.

This pipeline, which is part of the North-South Gas Corridor, is planned by the parties to be fully implemented in 2020.

Along with this, according to energy expert Yuri Korolchuk, Ukraine’s decision on the development of this project “will not bring benefit to Ukraine”. Ukraine will have to "pay for the construction of a gas pipeline worth 250 million dollars" and "overpay for gas, which it will then receive from Poland."

The main purpose of combining the Polish and Ukrainian gas transmission systems is to provide opportunities for increasing gas imports to Ukraine from Europe through Poland, as well as ensuring the storage capacity of European gas in Ukraine’s underground gas storage facilities, which is currently hampered by the non-modernized gas transportation systems and their insufficient capacity.

During a meeting in Kiev with President Duda, Yatsenyuk also said that Ukraine is ready to supply electricity to Poland from the Khmelnytsky Nuclear Power Plant (NPP).

Duda also spoke at a press conference after the talks, for the implementation of the Minsk agreements in full and for the restoration of Ukraine’s control over territories and borders in the Donbas and Crimea. The Polish president said that the European Union and other countries should not lift the sanctions against Russia until it fully implements the provisions of the Minsk agreements.

At the same time, unlike his previous statements, Polish President Duda stated that Warsaw does not intend to interfere in the work of the Norman quartet.

Along with this, it is significant that President Duda began his visit not from meetings with Ukrainian officials, but from a visit to the Polish military cemetery and memorial in Bykovnya, near Kiev, where the remains of thousands of repressed Polish soldiers are buried.

The political dissonance of relations between the two countries is the fact that in May President Poroshenko publicly promised the ex-President of Poland Komorowski to change the laws of Ukraine "On the legal status and honoring the memory of fighters for the independence of Ukraine in the twentieth century", which, however, remains unchanged.