Vladimir Putin as a “progressor”

December 17 2015
127
“Calmly, we can do anything,” said President Putin in the Security Council in spring 2014, after the American Bandera coup in Kiev, and the Crimean and Donbas response of Russia, when relations between Moscow and Washington began to resemble preparations for war. 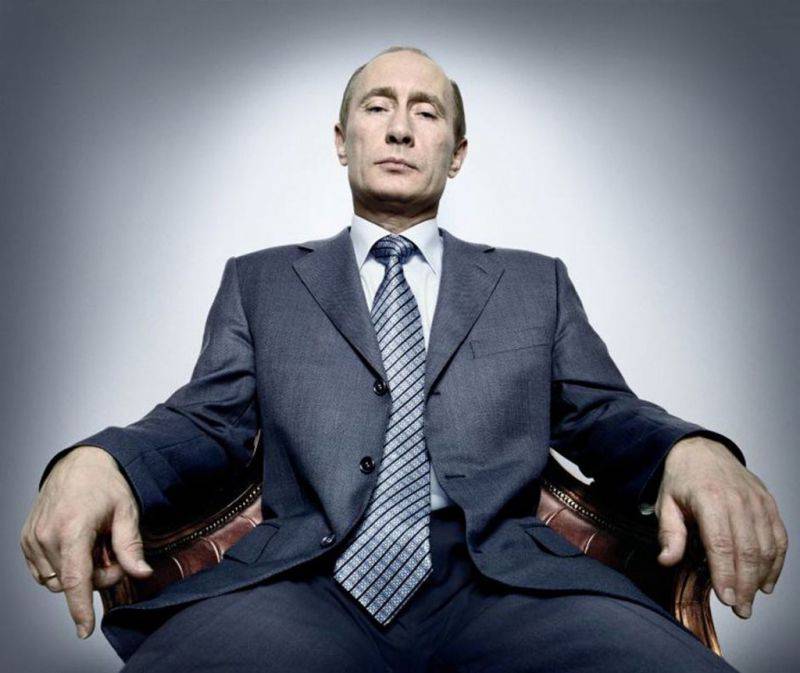 Eternity seems to have passed since then, although in reality less than two years have passed. The world has changed a lot, and it turned out that America can far from everything, and the Bandera Ukraine, cut off from Russia, is today on an economic and political bottom. And Russia not only defended the Crimea, Donetsk and Lugansk, but also conducted a brilliant operation in Syria, and strengthened the position of the allied government of Bashar Assad.

“Who is Putin?” - for many years, “democratic” Western politicians and publicists have been asking themselves, and they are repeating it today, and giving new answers, that is, they still cannot find the answer. Indeed, when you try to comprehend our president, you come to a certain dead end. Although Vladimir Putin has already been written a lot, and continue to write.

He is not tall, and the pillars of civilization and humanity can never hold back a mocking grin about it. Now Putin’s walk has been analyzed and it’s found that it’s a “shooter’s walk”, and he will “kill everyone” ... All forty shades of hatred of Putin have become familiar, but the Western dirt doesn’t stick to him for some reason, like barking Pugs to an elephant. And the more barking of our "fifth column".

Western world media can not turn Putin into a "villain", despite all the efforts, although they have already tried all the nicknames and labels on it. On the contrary, they themselves begin to be demonized in the eyes of their readers, they get a label of liars on their foreheads. “We would have our own Putin”, - this idea often flashes in the revelations of many Western political scientists and public figures, and people from the street speak about it openly, especially on the Internet.

The popularity of Putin in the West causes a special fury of the Western press. Many in Europe would like to see Putin even the president of the world ... Philip de Villiers, the former French presidential candidate, said frankly: "I would trade all French politicians for one Putin." So the president of Russia becomes a watershed in the West - it really splits the Western world in relation to it. Why?

The accusations of Putin’s enemies are indulgent and standard, continuous repetitions, variations on the topic of “authoritarian dictator”. And who themselves? Fluffy democratizers with winged "Tomahawks". “Putin is the best thing that has happened to Russia over the past hundred years,” said one senior US military official, well, you can see something better in the military ...

Who is Putin? Recently, US Secretary of State John Kerry, waiting for Putin in the Kremlin, jumped on the spot when he entered, which indicates excitement. Unable to contain emotions experienced politician before meeting with the President of Russia ...

Vladimir Putin, 15 years old, is in charge of Russia, these are three Lenin terms, and he is approaching the Stalinist record already. During this time, Russia has risen from the ruins of the 90s, and is now regaining its superpower status. The rating of the president at the population of Russia has stiffened at maximum values. In essence, Putin is the most democratic, popularly supported political leader. Why?

The standard of living of the Russian people over the years has risen by several times, the country's GDP has increased 4 times, the integral indicator of the state of society - the birth rate in the country - has become positive, that is, people believe in the future of Russia. The country's population began to grow naturally for the first time in many years, including the later Soviet ones ...

Who is Putin? How to explain this phenomenon? What a person cannot explain, he calls God, or destiny, but means by this one and the same thing - a certain providence, which acts in this way and not otherwise. AT stories There are many difficult-to-explain places in Russia, therefore, even Catherine’s field marshal Minikh expressed his bewilderment: “Russia, undoubtedly, is ruled by the Lord God himself, otherwise it is impossible to explain its existence ...”

In this regard, I recall the world of the Strugatsky fiction brothers: maybe Putin is a “progressor”? Couple with Medvedev? Plus Shoigu and someone else? Or do “progressors” from other high worlds act through them? To disavow the dangerous unipolar American lurch of our world, and return it to bipolar, or even multipolar stability?

There is something about Putin in the manner of the Strugatsky "progressors". All his “colleagues” and “partners”, even obvious enemies, need to build relationships with everyone, take into account their legitimate interests. Only childhood on the Leningrad streets affects, and “when fighting cannot be avoided, it hits first”.

By the way, Putin said about Medvedev when he proposed his candidacy for the presidency of Russia, which he believes in on the basis of some kind of “alchemy of the soul”. Washington checked Medvedev's “alchemy of the soul” for being liberal with the 08.08.08 war in Georgia, and was mistaken. It turned out that he is the second Putin. What kind of "alchemy" is this?

Rostislav Ischenko, in my opinion, one of the most astute analysts, noted that the Putin-Medvedev tandem was able to mislead Washington, gave him hope that Russia would split, that the “liberal” Medvedev would challenge the “conservative reactionary” Putin, and become the second Gorbachev. This strategy has managed to win a critical five years for the restoration of Russia. Otherwise, America’s attack on Russia would start earlier, probably in the Yushchenko presidency in Ukraine, and Russia would be in a very difficult position.

Over the years, Putin and his team have managed to unite Russia torn apart and tortured in the 90s, and have created the country's patriotic elite, albeit with reservations and many flaws. But after all, it was created from scratch, practically out of nothing ... And, together with Putin, achieved visible success, today defends the vital interests of the country in Ukraine and Syria, keeps the blow of the West. Russia is already going on the counteroffensive with the help of the VKS in Syria, where did they come from? Such a military space forces for any money you can not buy anywhere ...

... And President Putin flies around the world and represents Russia, he is not afraid. Because the "alchemy of the soul" suggests something? In the event of an unforeseen incident with him, according to the Constitution, the country will be headed by Prime Minister Medvedev, and there is probably already a “Plan B” for this case. Therefore, the West must also take care of Putin. God forbid something happens to him, Russia will definitely not wait for an “objective investigation”. Moreover, if Putin is truly a “progressor” from the worlds of the Strugatsky science fiction ...