Tatarstan’s parliament began to threaten Moscow to “recall the nineties” 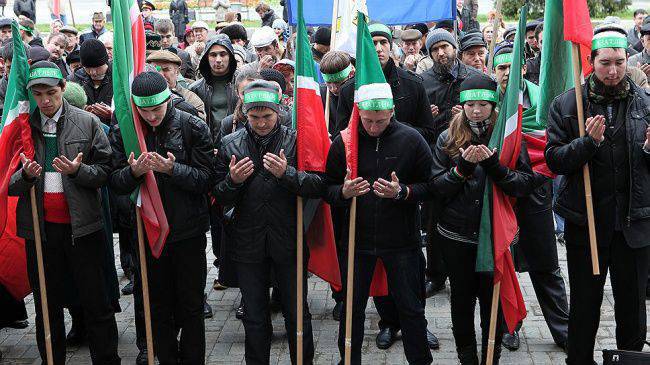 According to the newspaper "Evening Kazan", the participants in the discussion stated that the concept destroys the national education in Russia, in connection with which mass unrest is possible in Tatarstan. According to the chairman of the Executive Committee of the World Congress of Tatars, Rinat Zakirov, the adoption of the concept “brings us back to the 90 years when people took to the streets in the thousands! This crowd, an unrestrained crowd - it demanded equality! .. Apparently, the authors of this concept absolutely do not understand the life of the regions, they have not studied well ... ”.

Meanwhile, according to the testimony of the same newspaper, the only example of a “wide public discussion” was the holding of a roundtable on November 9 in the State Council of Tatarstan. And the specific content of the appeals of the President and the Speaker of the Parliament of Tatarstan to the Speaker of the Federal Parliament on issues of linguistics remains a secret - they are not shown to journalists, not even to the majority of deputies.

Similar statements were also noted by other deputies, most of whom in the State Council of Tatarstan represent the interests of Tatar ethnocracy. The keynote of all recent appeals from Kazan to the federal center was poorly concealed blackmail by destabilizing the situation in the republic in the event of coercion to the implementation of federal federal legislative initiatives.

As reported by EADaily, despite the postponement that Moscow made for the year for Tatarstan on the execution of the federal law on the name of the republic’s top official, the Tatar ethnocracy is trying to push the exclusive right to the "President of Tatarstan". At the same time, in the schools of the republic, the general education of the Tatar language continues with the prohibition of learning Russian as a mother tongue, and at the federal level, with the help of the Tatarstan lobby, the State Duma of the Russian Federation blocks legislative initiatives to give the Russian language the status of a mother tongue. At the same time, the republic still does not make attempts to pay off the state debt (90,2 billion rubles), ranking fourth in the list of debtor regions of Russia.

Ctrl Enter
Noticed oshЫbku Highlight text and press. Ctrl + Enter
We are
Western countries' interest in the Islamic factor in post-Soviet TatarstanForeign religious influence on the Muslims of Tatarstan in the post-Soviet period
Military Reviewin Yandex News
Military Reviewin Google News
273 comments
Information
Dear reader, to leave comments on the publication, you must sign in.