December 17 2015
236
Of news summaries of our time:
“Rossiyskaya Gazeta”: “An illegal immigrants shop for bottling fake vodka was laid down near Novosibirsk.”

"The Information Portal of the City of Mine": "Fake alcohol is delivered to the shelves of Shakhty shops."
Russia-1: "The underground network supplied alcohol to Moscow."
"Our Yaroslavl": "In Yaroslavl, the underground shop for the production of fake alcohol was liquidated."
"Business newspaper": "In the Republic of Tatarstan, 21 people poisoned themselves with alcohol in a month, since the beginning of the year - 315".
"31TV": "13 tons of surrogate alcohol seized in the Chelyabinsk region."

This list can be continued, as they say, to infinity. The horrific picture of the distribution of alcohol-containing surrogates looms in most regions of the Russian Federation. Under the guise of high-quality and sometimes even elite alcohol, they are sold both from store shelves, via the Internet, and "from under the floor" hundreds of thousands of liters of poison, which take the lives of Russians in Novosibirsk, Kazan, Chelyabinsk, Voronezh, Moscow and other Russian cities.

The police detain numerous trucks with millions of bottles of “French brandy” and “Scotch whiskey”, the owners of which, as they say, cut an enormous loot based on the desire of some Russians not only to relax, having missed a glass or two, but at the same time not to empty their wallet.

Frankly speaking, the carelessness of citizens who are willing to purchase “Cuban rum” or “Armenian cognac” at online stores at 100 rubles per bottle surprises. At the same time, people who believe that saving their own health is justified, being in a hospital bed, the first thing they say is not about “what a fool I am”, but about the fact that the Russian authorities need to restore order in the sphere of distribution of alcoholic beverages. It is, of course, understandable - Putin, by definition, is always to blame for everything ... And even that he didn’t dissuade Van Vanych from the Moscow region from buying three bottles of “bourbon” and a bottle of “wine from bunches of grape plantations of Provence - the southern, naturally, slopes” at the price of 120 and 75 rubles, respectively. When Van Vanych started a tete-a-tete meeting, face-to-face, with a toilet, he was just beginning to suspect that his problems began purely due to the fact that it was the Kremlin authorities who literally poured “collection bourbon” into his mouth, after the use of which last week they could not pump out the neighbor on the floor Vasil Vasilich. But when Van Vanych regained consciousness already in the reanimation of the central regional hospital - it was then that the picture of the government against him conspiring before him and finally opened ...

And after all, there are unfortunately a lot of Van Waniches who are ready to poison themselves for the sake of "financial gain" in the country. Internet such people "comes to the rescue." For example, Yandex responds to a request for the purchase of alcohol “cheaply” (attention!) With more than three million different links - points in almost any region. Do you want to - send, do not want - take it yourself from the dealer in the nearest alley.

Some links are especially interesting, if only because they do not hide the sale of alcohol-based "fake". And some of it without special camouflage is called directly - counterfeit. And others decide to give some "exquisite charm", referring to the "duplicates of elite alcohol."

Opening such links, you can find a whole lot of offers from all kinds of online markets. For clarity, one example of selling venomous poison: whiskey, "duplicates." For example, the famous brand White Horse goes on 180 rubles per liter! As the famous Internet meme says: per liter, Karl! .. 12-year-old Chivas Regal - 140 rubles per bottle ... Well, and Jack Daniels - and at all on 120 ... 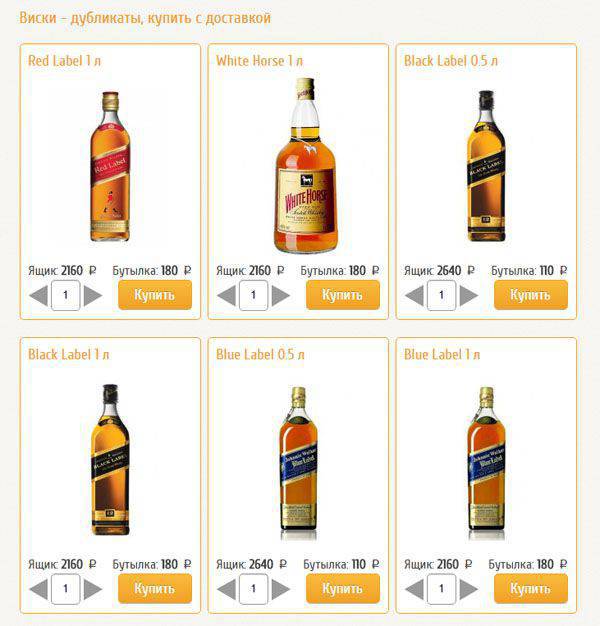 And there are not a few such stores, and not even dozens. They are like stalls in the oriental bazaar - for lovers of deadly freebies, a real “pantry”. But that's where a person who decides to beat a bottle of the same “Chivas” bought at the price of a beer mug will end up after visiting such a pantry - a question that can be asked by medical experts.

However, is it worth to declare exclusively that, they say, they are to blame themselves, and that the state apparatus in this case is completely “not in the business”? Obviously, if Van Vanych, mentioned more than once, decided to, as they say, at his own risk and risk, cut a bottle of “elite” cognac (whiskey, rum, etc.) on his own initiative, purchasing goods at a price that is not adequate for the original drink, here it is stupid to poke a finger up with a dumb question on the brow. But the problem is that a surrogate is withdrawn not only in online stores offering it at the price of a handful of seeds, but also in supermarkets, where the owners decide to put 600-700 percent on one bottle. In other words, in the absence of a system of really severe punishment for death traders (after all, in essence, traders differ in a surrogate alcohol-containing potion from spice traders or other illegal (not distributed through a network of pharmacies and clinics) drug drugs), these same traders will only increase the production of poison by distributing it through affiliated retail chains. The owners of such networks, acting in fact as accomplices in a criminal offense, today also do not bear any responsibility for selling, under the guise of certified products with excise labels, a substance that is bottled in one of the city garages.

They detained one wagon, they detained the second - a surrogate was poured, at best, on the ground, and then what? And then the producer of the poison has a desire to make the police look through her fingers another time and see the movement of a truck with a surrogate and allow her to a consumer who really wants to try what real Cuban rum tastes like. And there will definitely be policemen (albeit those who passed the recertification perfectly ...), who will decide that a couple of dozen deaths from alcohol poisoning at the subordinate area is not something that may not allow an envelope with an equivalent of half-year salary.

So what is the state apparatus?

The Federal Antimonopoly Service has finally recognized that the level of surrogate alcohol in Russia has reached a “critical point”. To solve this problem, it is proposed to lower or freeze the excise rates for alcohol of legal producers losing billions of rubles due to the rampant "alcoholic" crime. At the same time, the FAS criticized the initiative to introduce the law on the sale of alcohol to persons who have reached the age of 21. According to the representative of the FAS, this can only provoke an increase in the volume of surrogate alcohol consumption by persons whose age 21 has not reached the year. At the same time, FAS is considering supporting the idea of ​​the Ministry of Industry and Trade to sell, for example, beer in “non-stationary outlets”, including stalls and kiosks. The initiative is somewhat strange, especially when you consider that the inventive owners of many kiosks, having set a table in front of the outlet, now declare that they have a “cafe” here, and that they can sell practically any alcohol around the clock around the clock ...

In addition to the voiced initiatives of the government in the person of the deputy chairman of the Russian government, Alexander Khloponin, they propose to allow the regions to independently decide on the time intervals for the sale of alcohol, as well as whether it is possible to ban the sale of alcoholic beverages in full. On the one hand, a statement about a possible ban on the sale of alcohol at the regional level looks like an attempt to take care of preserving the health of the population, but immediately recall the statement by the FAS that the population in this case can start drinking all sorts of rubbish from the outside. Moreover, such an initiative would not turn into Gorbachev's “dry law”, when under the guise of fighting alcoholism vineyards began to be cut down and factories producing high-quality products began to be mastered by brick - the other extreme, which led to what is known ...

In general, the problem has acquired a truly serious scale and, by definition, requires an informed decision at the state level. At the same time, one should not forget that in this case the state can adopt a law, but it cannot force every person to take care of health. In the end, the presence of a sober head on the shoulders in the literal and figurative sense is one of the most effective ways of dealing with the producers of the surrogate and for the health of the nation at the same time.

Ctrl Enter
Noticed oshЫbku Highlight text and press. Ctrl + Enter
We are
Results of the week. “Everything will go like clockwork: at first — in the evenings — singing, then pipes will burst in the toilets ...”New plants and workshops in Russia in 2015 year
Military Reviewin Yandex News
Military Reviewin Google News
236 comments
Information
Dear reader, to leave comments on the publication, you must to register.