French Chamelot revolver - Delvigne of the 1873 model of the year 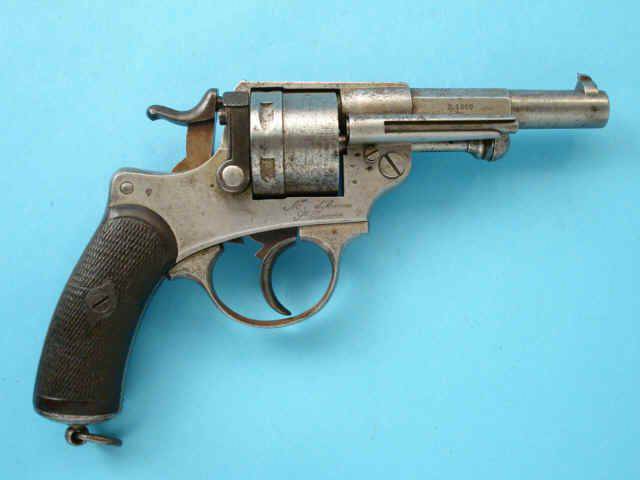 The failures that befell the French in the Franco-Prussian War of 1870 clearly demonstrated the need to equip the army with modern weapons. Although the focus was on artillery and cavalry weapons, the question was still raised about equipping infantry officers and non-infantry officers with modern personal small arms.

A competition was announced for the best sample revolver. The main requirements were as follows: the use of ammunition with a central combat cap, a double-action firing mechanism, reliability, ease of operation and low cost production. Several revolvers were submitted to the competition, including Lefaucheux MLE 1870 Marine, Galland, Perrin and Chamelot-Delvigne, derived from weapons adopted in 1872 in service in Switzerland. 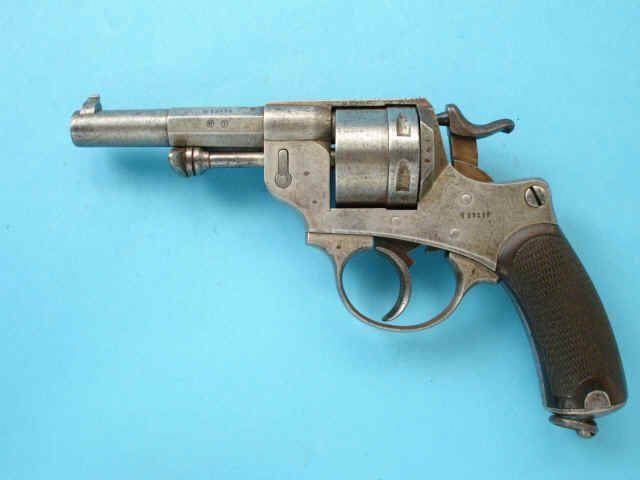 The commission recognized the winner as the Chamelot - Delvigne revolver, which, after modernization, was adopted by the French army in 1873 under the name "Revolver d'officier d'infanterie modèle 1873". This revolver was received by police officers, as well as non-commissioned officers of the cavalry, army, naval fleet and artillery. 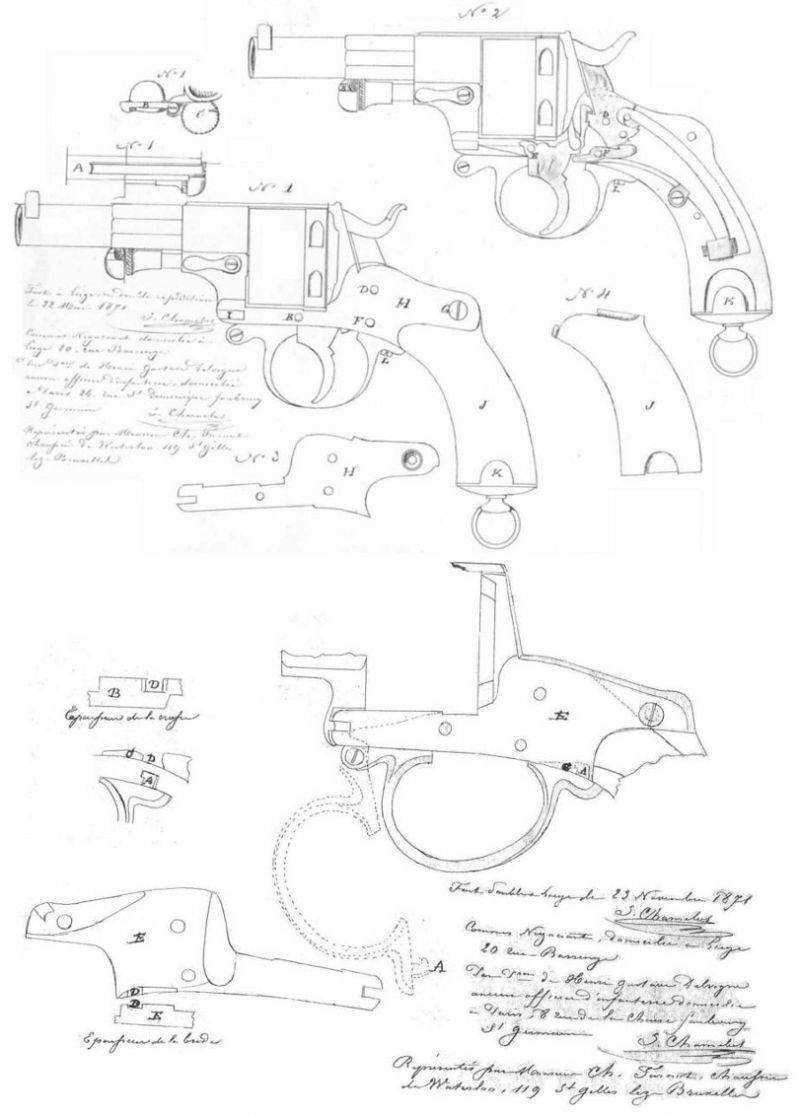 The weapons developers were Jean Shamlu and Onri Gustav Delvin. Several applications were filed with the patent office in which their names were indicated: Jean Chamelot, a master living in Liege, and Henri-Gustave Delvigne, an infantry officer living in Paris. The first developments of the revolver are dated back to 1871 by the year: patent # 28821 from 22 in May 1871 of the year and patent # 29664 from 23 in November of 1871 of the year, which describes the device of the trigger and the removable frame cover. 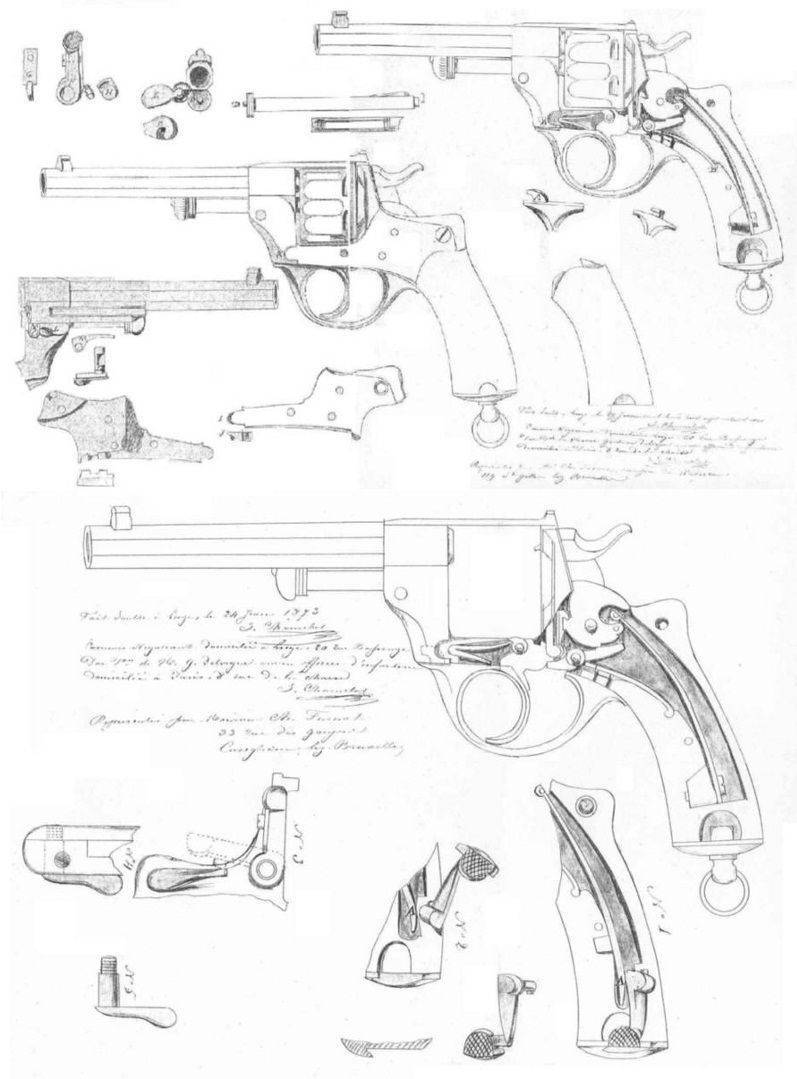 The designers gradually upgraded the weapon and at the beginning of 1873 of the year they again received a patent # 31924. In the same year, they received two more patents: No 32848 from 24 June 1873 of the year and 33283 from 18 November 1873 of the year. In these patents, the cleaning rod-extractor, the spring retainer and the drum door were modified. 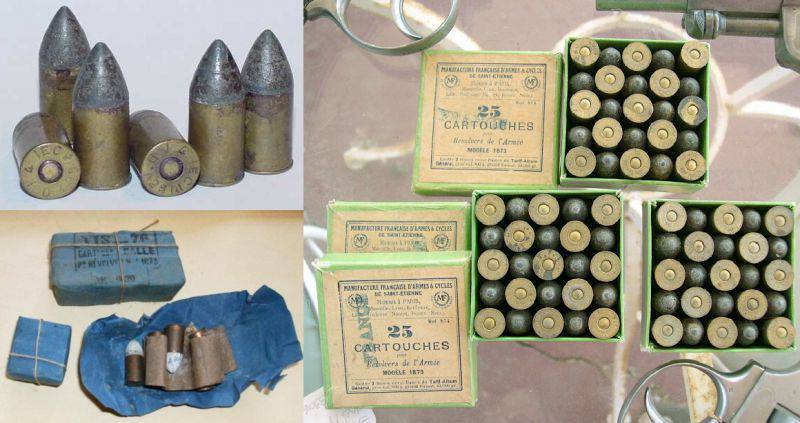 Especially for the Chamelot-Delvigne revolver, the 1873 model of the year was developed by the 11 mm cartridge - 11mm73 (11x17mmR). The cartridge has a brass sleeve with a flange and a cap of the central battlefield. The ammunition is filled with black powder and lead bullet. The first cartridges were packed in thick paper bundles, which were tied up with string. After 1890, the 11mm73 cartridge was slightly refined: the bullet was made more pointed, the gunpowder was increased. Packs began to do in the form of cardboard boxes. 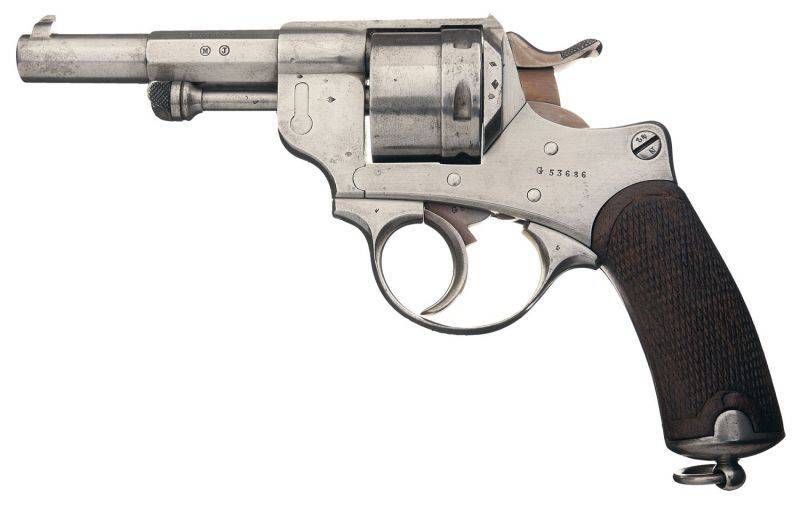 The Chamelot - Delvigne revolver of the 1873 model of the year was produced between 1873 and 1886 year. A total of approximately 350 000 copies were produced, and in the first year, before the revolver was officially adopted by the French army, only 67 revolvers were manufactured. 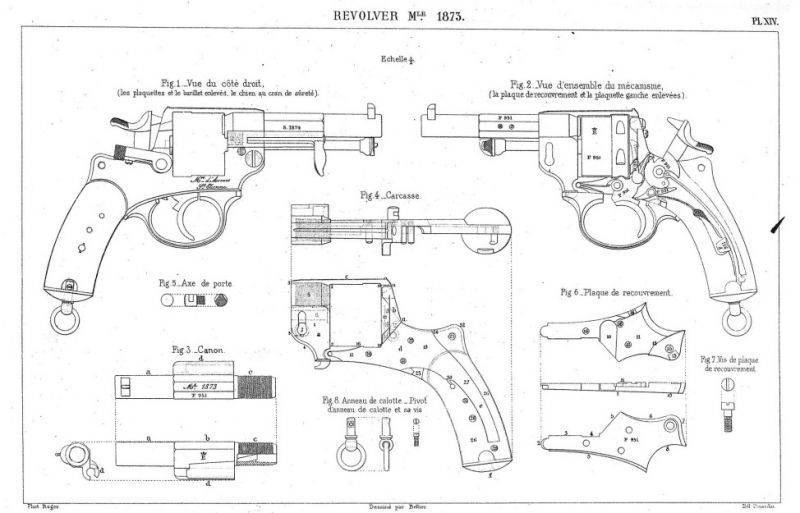 Chamelot - Delvigne model 1873, one of the first revolvers, which was equipped with modern technical documentation in the form of drawings and construction tables. You can purchase Drawings of the revolver system Chamelot Delvigne and Schmidt sample 1872 of the year on the page of the site Shop.HistoryPistols.ru. 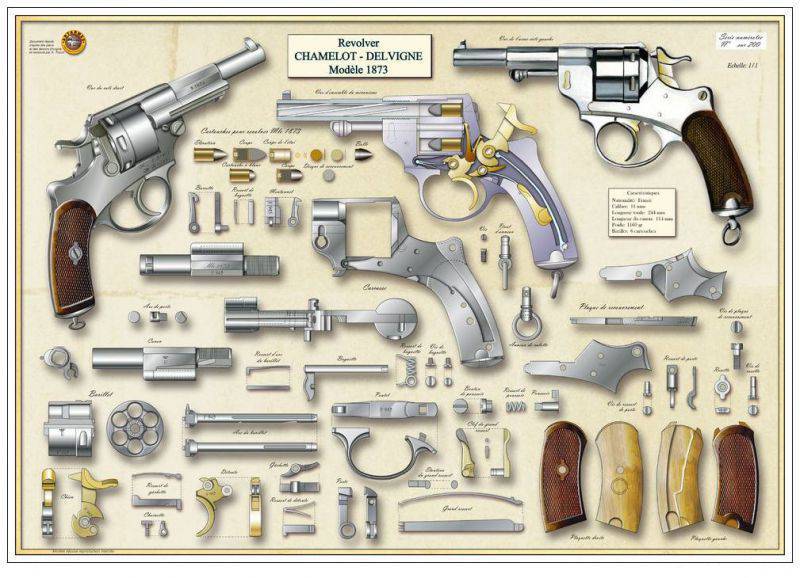 The French Chamelot-Delvigne revolver of the 1873 model of the year consists of a frame with a lid, details of a firing mechanism, parts of a drum's turning mechanism, a handle, a trigger guard, a ramrod extractor with a casing, a barrel and a drum. 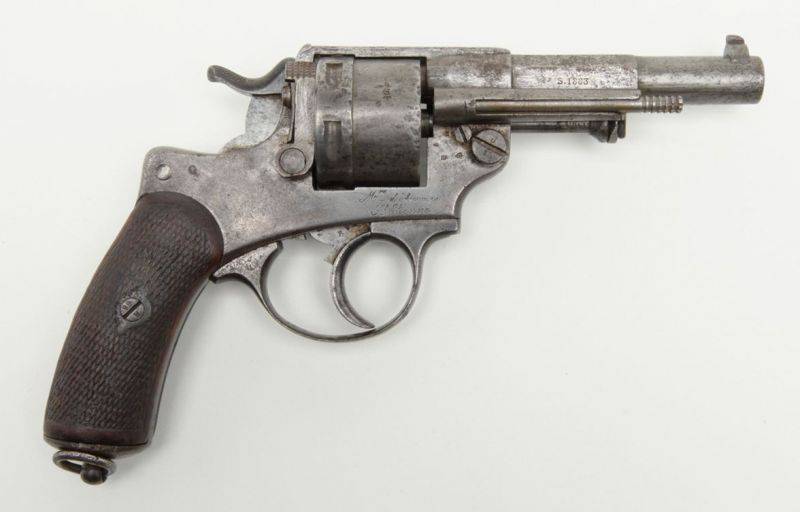 The metal surfaces of the revolver are light, not coated with burnishing or other protective coating. Drum smooth without dolov. These are the main signs distinguishing the weapon from the 1874 model officer's revolver. 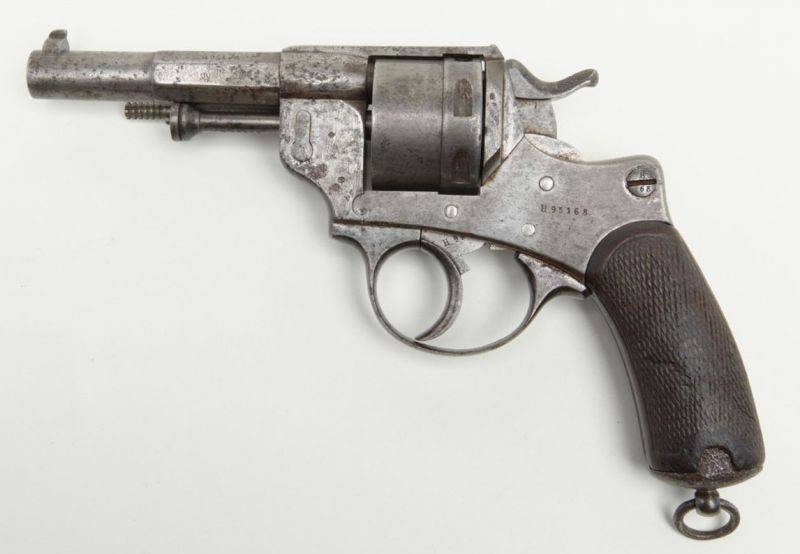 The total length of the weapon 240 mm, height 170 mm, barrel length 115 mm, weight of the revolver without cartridges 1040 gr. The barrel of the revolver consists of octagonal and cylindrical parts. 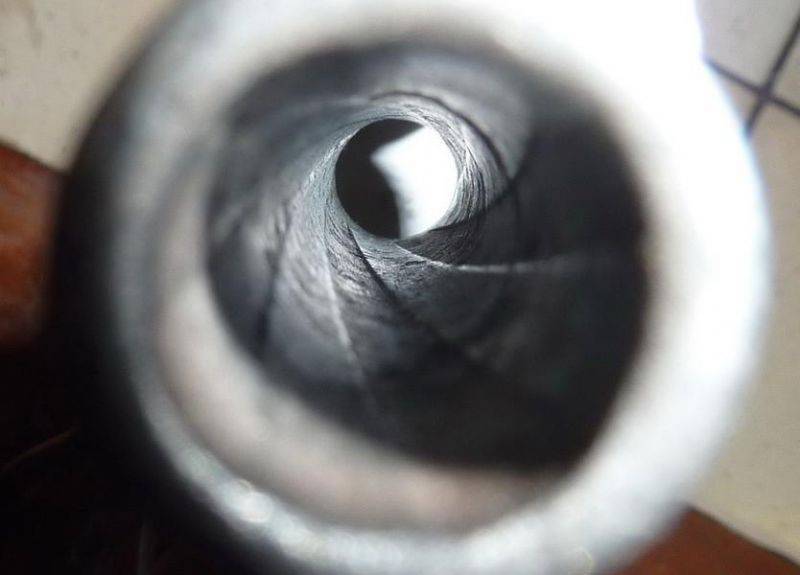 The barrel of a revolver has four right-angle slots.

Aim devices consist of front sight and rear sight. The fly is narrow, triangular in shape, mounted on a semicircular platform in the upper part of the trunk. 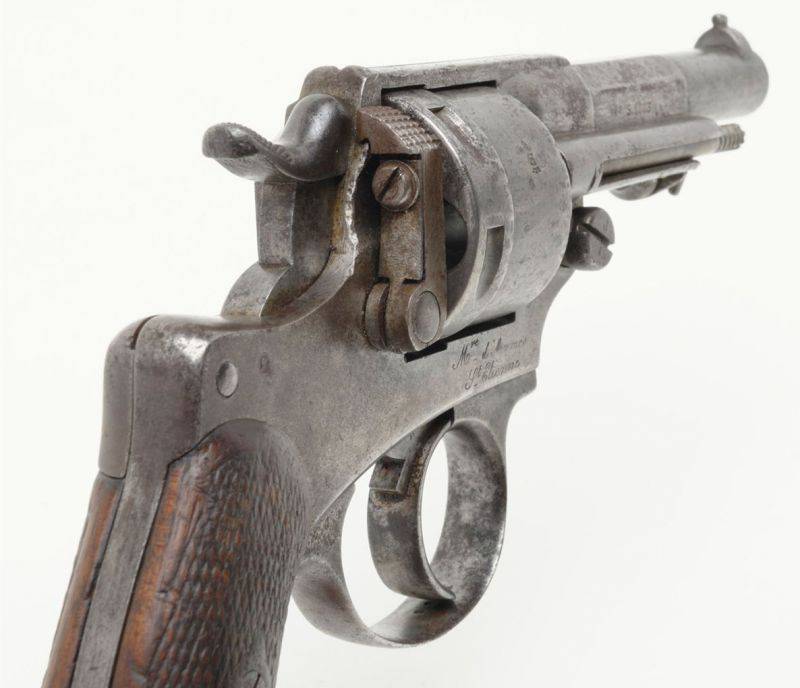 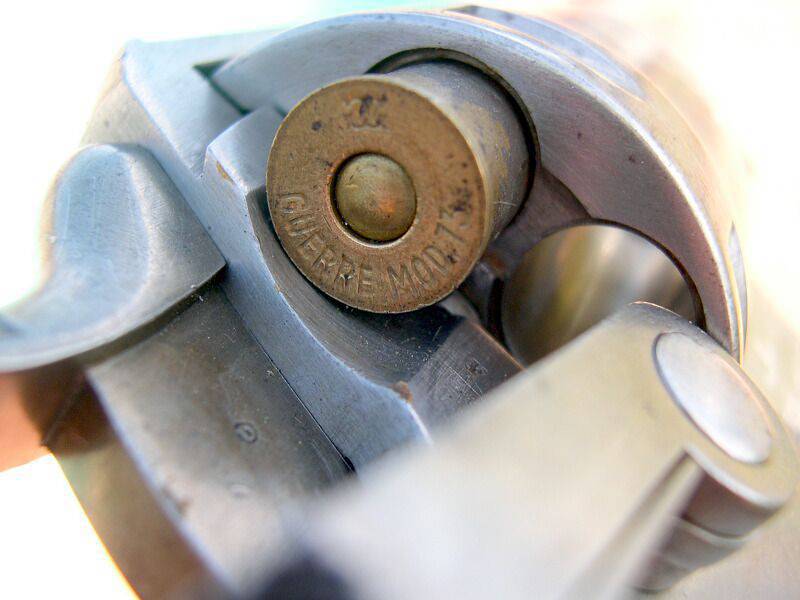 Before the equipment of the drum chamber, the door must be opened by turning it back on the axis. 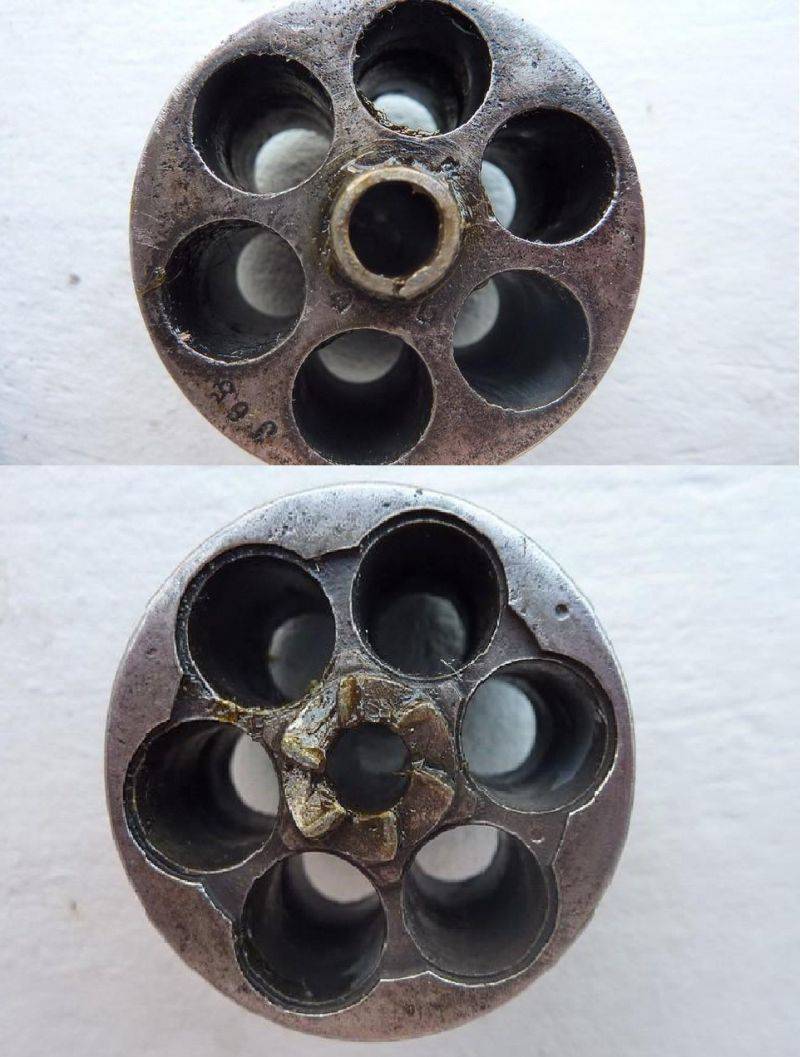 Drum arms cylindrical with six chambers. In the back of the drum, grooves for the sleeves of the sleeves are made and a ratchet is installed for the drum turning mechanism. 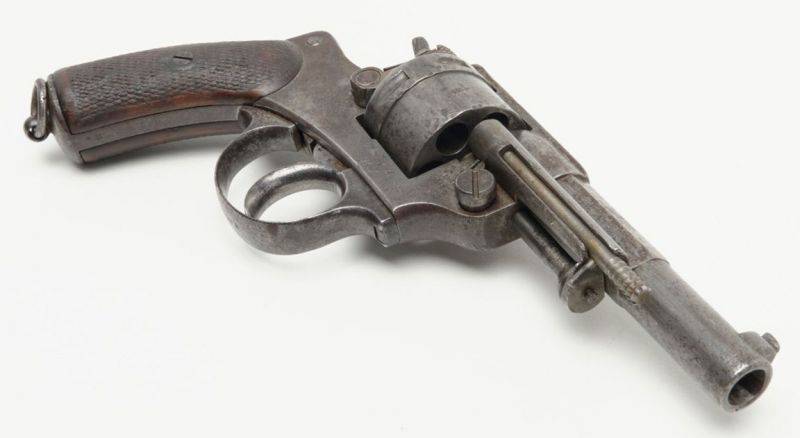 On the right side of the barrel, a ramrod extractor is installed in a special casing, designed to alternately extract the spent cartridges. 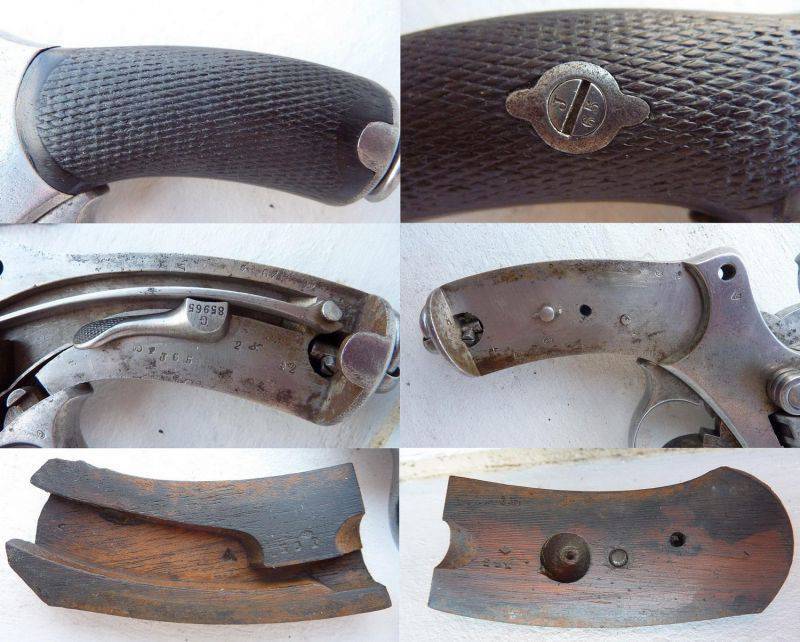 Cheeks revolver handle made of walnut wood. There are shades of wood from light brown to black. The outer surface of the cheeks is covered with a diamond-shaped notch. Internal surfaces have cutouts for protruding parts of the weapon. The left cheek handle attached at the bottom due to the protrusion of the lower base of the handle and the top at the expense of the frame cover. The right cheek is attached to the handle with a screw. 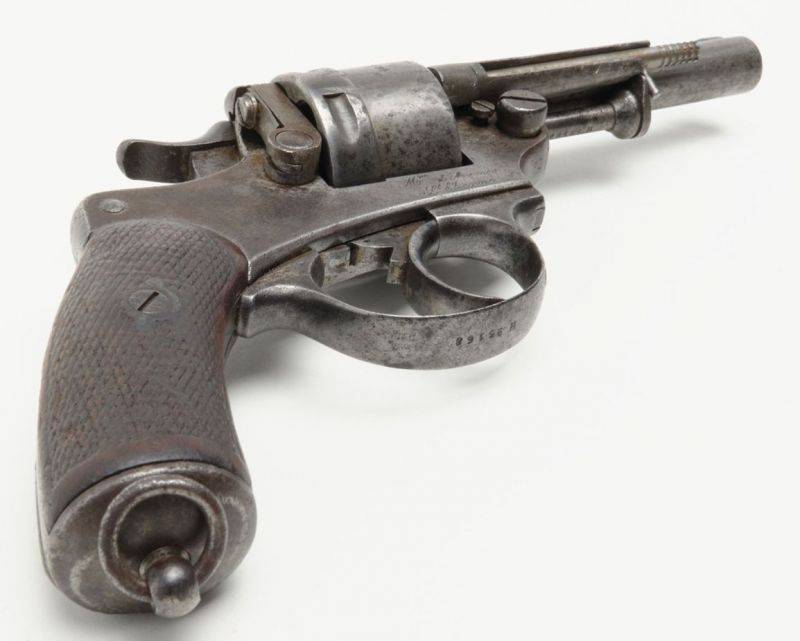 In the lower part of the handle there is a ring for fastening the revolving strap. 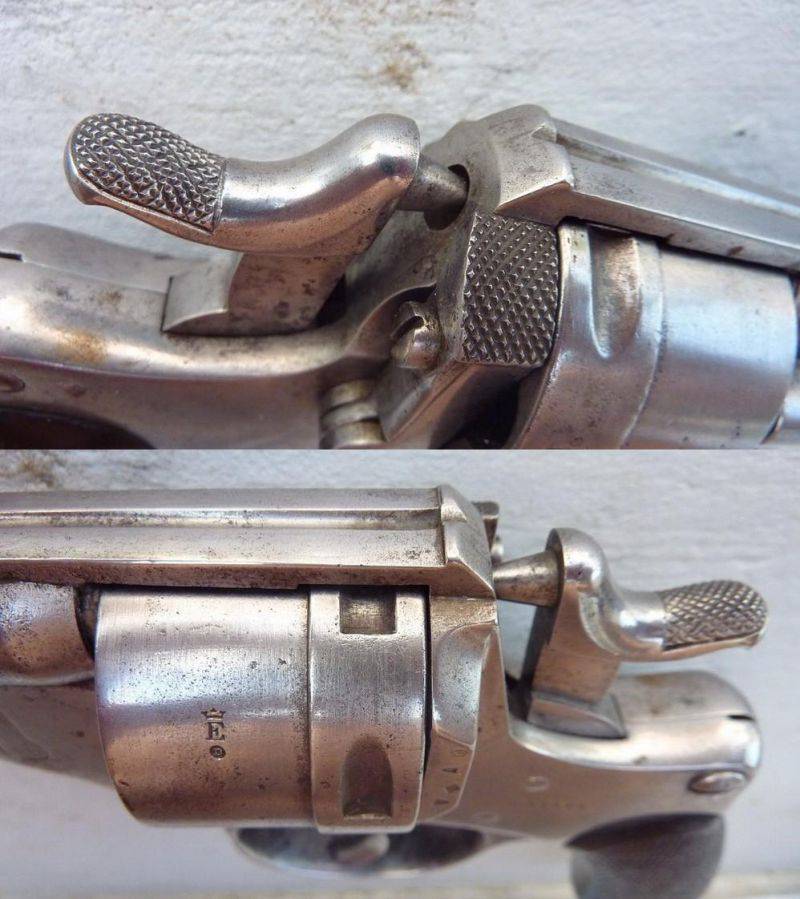 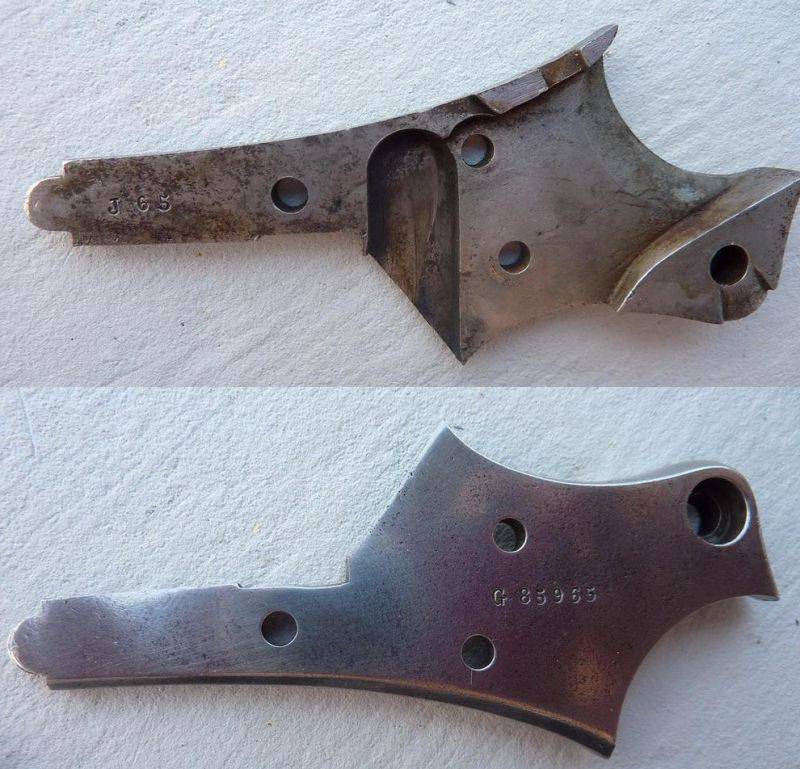 On the left side of the frame there is a cover that covers the parts of the firing mechanism. The cover is attached to the frame with a screw. 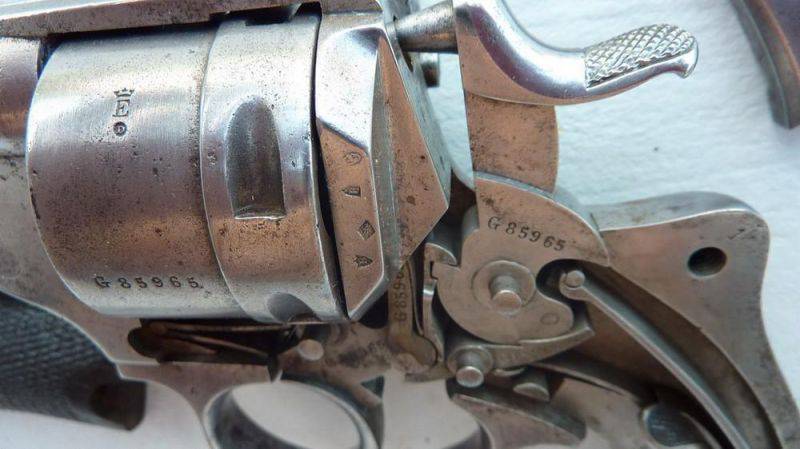 After removing the cover, the shooter has the ability to maintain parts of the firing mechanism, lubricate them or carry out minor repairs. 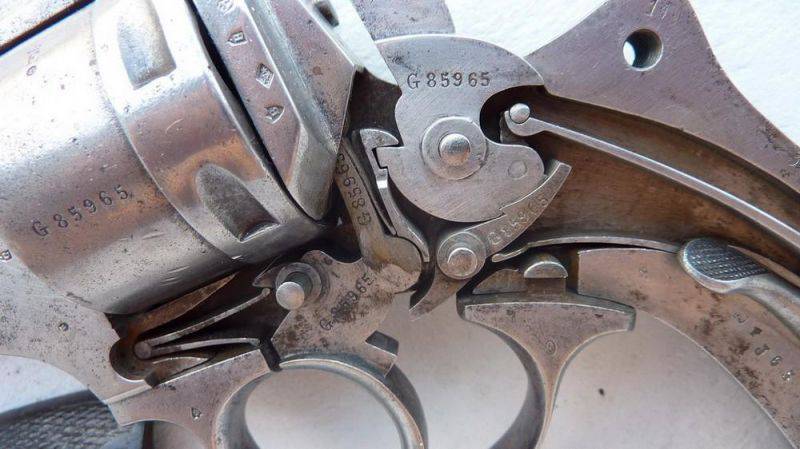 Serial numbers are applied to almost all the details of the weapon, including parts of the firing mechanism. 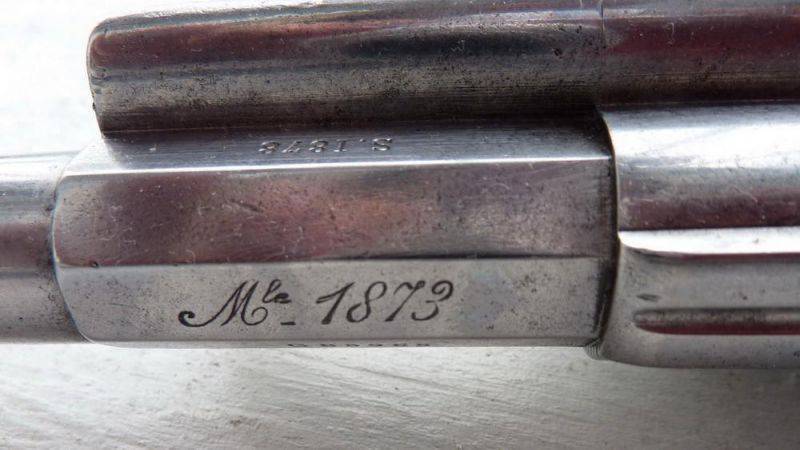 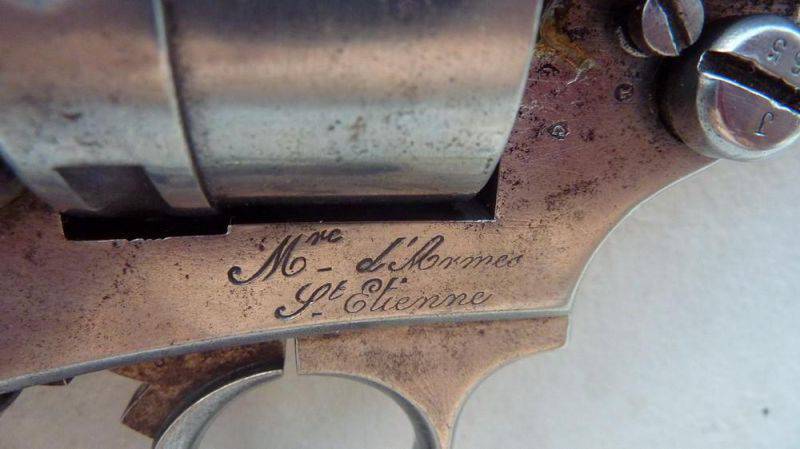 On the frame on the right side under the drum there is the marking of the manufacturer “Mre d'Armes St Etienne” - manufactory d'Armes in the city of Saint-Etienne (France). 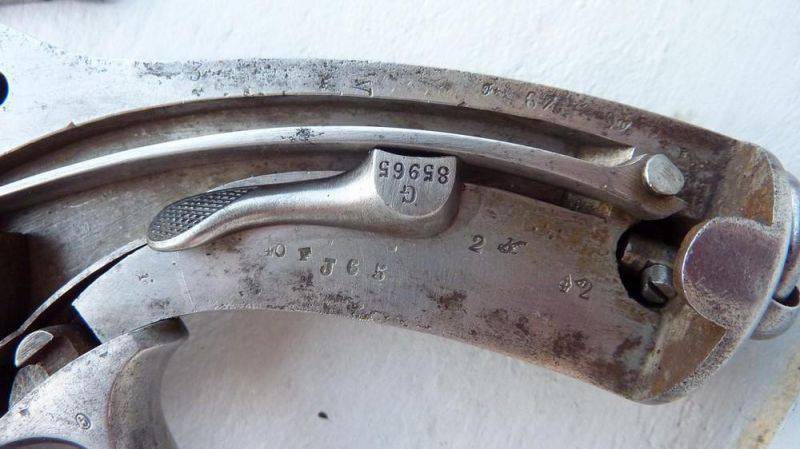 Factory numbers applied to revolvers made for the army, as a rule, consisted of one letter and five figures. F, G, H or J are most common in labeling. 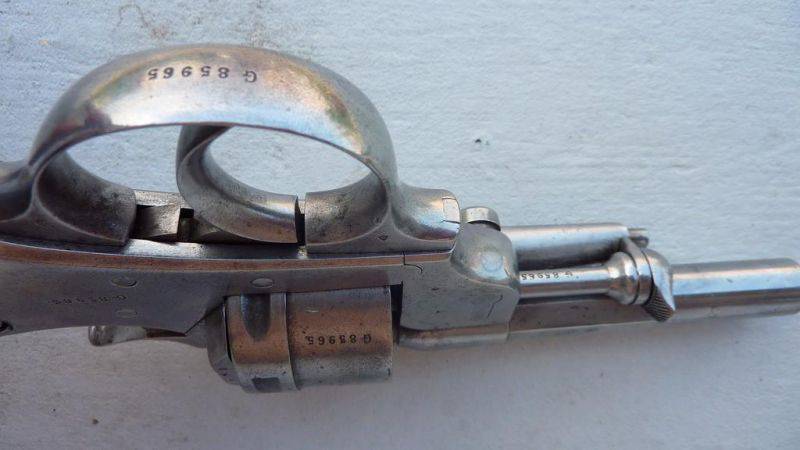 The revolvers of the 1873 model of the year were exploited for more than 100 years, and were used by both military and police units. In the police and gendarmerie of France, the revolver continued to be used up to the 1962 year. Weapons reliable and easy to operate. The disadvantages include perhaps only a weak cartridge filled with black powder and a shell-free bullet. Revolver faithfully served in various military conflicts: during the First and Second World War, in Indochina, Algeria and other colonies of the French colonial empire, where he got his nickname "colonial". Weapons successfully sold in the civilian market. Chamelot - Delvigne of the 1873 model of the year became the prototype for creating revolvers in other countries, such as Bodeo (1889) in Italy or civilian models of revolvers in Belgium. 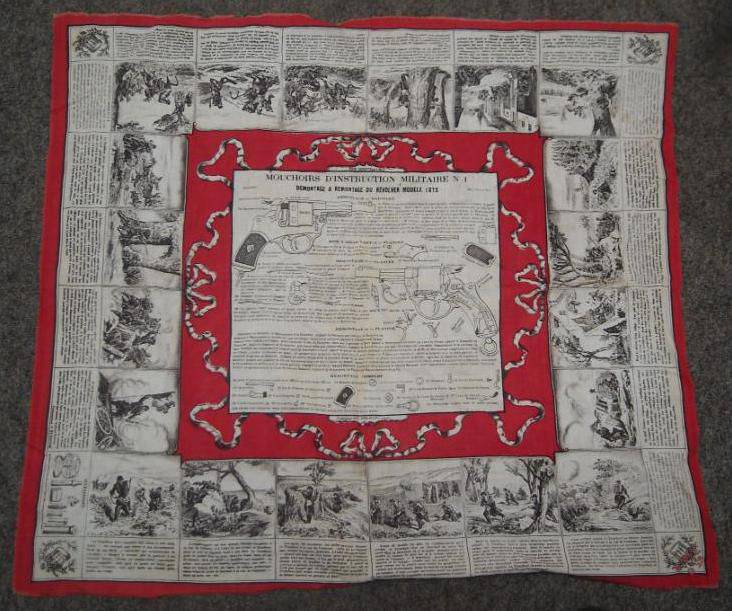 In the 1872 year, after the failure of the 1870 war of the year, universal conscription was introduced for all male French citizens. Special attention began to be paid to the training of soldiers. The military department of France made a very original decision. Special instruction handkerchiefs were developed, on which explanatory diagrams were applied to help the soldiers learn how to use weapons, provide first aid for injuries and basic tactics. 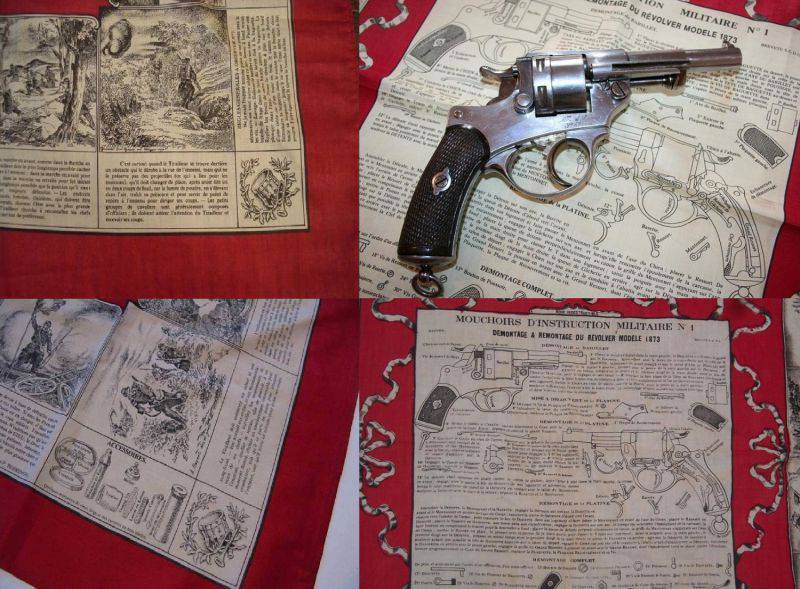 29 November 1880 of the year was issued a scarf - military instruction №1 "Disassembly and assembly of a revolver model 1873 of the year." Scarf No. 1 is a square of red matter of size 70 × 70 cm, in which the center shows instructions for disassembling and assembling a revolver of the model 1873 of the year and the explosion is a diagram of the weapon. The contour of the scarf lined 20 images with explanatory text describing the action of soldiers in various military situations. 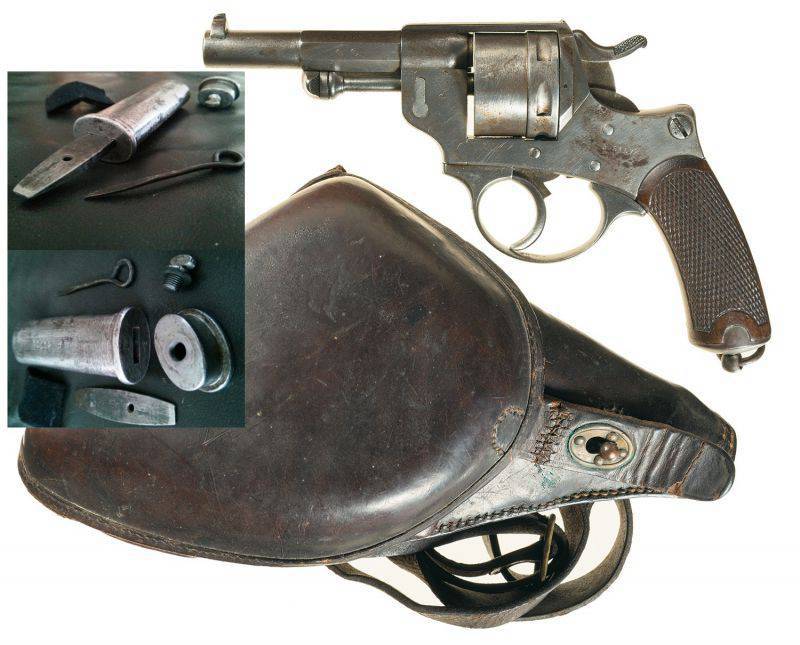 Revolver Chamelot - Delvigne sample 1873, was equipped with a regular leather holster and a set of national screwdriver - oiler.

Currently, the revolver is quite common and therefore cheap in the antique market. Its price usually does not exceed 700-800 dollars.