China, Iran and the "world of endless war"

December 17 2015
14
To reset the United States from its pedestal, to deprive them of their status as a world hegemon, as if Russia and China conceived it. They are supported by some smaller states that do not like the US geopolitical domination either. Iran stands out among the latter. The common goal of these countries is to use Washington’s strategic blunders both globally and regionally. If America does not know how to respond to the coordinated actions of these countries somewhere, then they will celebrate another victory. And the world order, once organized by the United States, gives another crack. 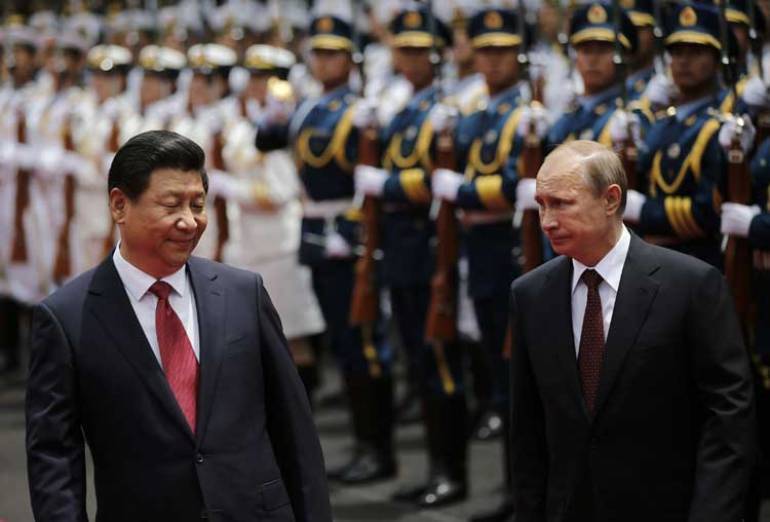 This is related by Nenad Drka (Nenad Drca) in the publication "Modern Diplomacy". The author is a former military translator, linguist, specializing in translations from three languages, who has worked in many countries (on three continents) for the last eight years.

In connection with the latest changes in geopolitics, Russia and China are cooperating and coordinating their actions politically, militarily and economically. This new collaboration “almost always has an anti-Western and anti-American character,” the author is sure.

Russia, China and a group of small states like Iran are aiming to throw the USA off the throne of the world hegemon. They do not like that there is only one geopolitical leader in the world. The “collective goal” of Moscow and Beijing is to use all the blunders of the United States, both regionally and globally. The absence of an American reaction to the actions of China or Russia is a success for the latter. According to the author, the “Chinese-Russian axis” is currently opposing American interests in almost all “imaginable fields”. And the level of global cooperation between Russians and Chinese "is a very serious problem for the global status quo."

New coordination between China and Russia is seen not only in major economic agreements excluding the dollar, but also in other areas. China “imitates the Russian strategy by conducting its microterritorial expansion and claiming various disputed islands in the East China and South China seas,” the analyst said.

Moscow and Beijing are accused of conducting large-scale anti-American cyberwar, as a result of which intelligence and industrial cyber spies steal state and commercial secrets.

China intends to buy oil not for dollars, but for yuan, and Russia approves of this financial maneuver. This is directly harming America’s interests, as China will soon become the world's largest oil importer (with the yuan recently recognized as the world's reserve currency). Both Russia and Iran, writes Nenad Drka, are now using the yuan instead of the dollar for oil-buying transactions with China.

This mutual economic geo-strategy strongly brought Beijing and Moscow closer together. The bilateral trade volume of the two countries rose to 95 billion dollars in 2014 year. True, the reality is that China cannot ignore the fact that the main trading partner for Beijing is the United States and the EU, and not Russia at all. China cannot afford to “sacrifice” the American market. And the United States is aware of this. All they have to do is solve the problem: how can the US “reset” its relations with China and with Russia, “before it is too late”. If Beijing’s current economic geostrategy is not held back until the 2040 year, then China’s GDP could be 40% of the global one.

And then there's Iran. Beijing and Tehran held talks on ways to cooperate on civilian nuclear power. There is interest in oil deals. It is clear that China is thinking about the economic benefits of trade with the countries of the Middle East, including weapons and technology.

In contrast to the Americans, who had thought of an “Asian U-turn,” China showed great negotiating abilities. Most likely, Beijing’s strategy was underestimated by senior executives in Washington. While the United States was "working hard" in trying to convince its allies to abandon the support of the Asian Infrastructure Investment Bank (AIIB), China deftly bypassed the American talkers and managed to convince many US allies to support him. Then the Chinese proudly announced that not only American allies, such as Great Britain, France and Germany, were registered as founding members, but also Egypt, Israel, and Jordan, and Kuwait, and Oman, and Pakistan, and Qatar, and Saudi Arabia, and Turkey, and the United Arab Emirates. Finally, I entered the bank and Iran. This was a real "insult" for the United States, since Washington at that time applied financial pressure on Iran.

If the United States pursues a "world gendarme" policy, then China does not seek an active role in conflicts in the Middle East. China prefers to act in confidence: openly and directly. Beijing, as a rule, avoids the use of hard power. Against the background of the American strategy, it seems that Beijing understands all the benefits of “soft power” perfectly. All these PRC maneuvers are undermining America’s traditional role, the author believes.

Today, Russia may seek cooperation with the United States on Syrian issues, but it will not cease active cooperation with China. And their common goal is to weaken American financial domination in the world market.

Probably, the United States should improve relations with the PRC, given the large scale of both trade and US debt to Beijing. At the same time, Washington needs to pay attention to strengthening Chinese rapprochement with such obvious US strategic opponents as Russia and Iran. According to the analyst, today we live in a “strange new world” where the war does not stop in one form or another.

Actually, let us add, no such “strategy” for bringing Russia and China closer, and all the more so, a single global policy does not exist. We think it is only in the minds of other analysts or propagandists. In fact, the Celestial does what is beneficial to it. It is beneficial for her to buy some modern weapons systems from Russia in small quantities — she will do it and then copy them. It is advantageous to agree on gas supplies at a price that for some reason is not known to journalists - the “dragon” will agree, taking advantage of the pressure on Western sanctions in Russia.

And here is the latest strategic innovation of the PRC: the new “Silk Road”, leading from China, has earned bypassing Russia. Write about this major Russian media.

The first transit train in the framework of the trade route from China to Turkey came to Georgia from China, bypassing Russia, 13 reported in December "Moscow Komsomol".

According to Prime Minister of Georgia Irakli Garibashvili, “this train is decorated with the flags of Georgia, Azerbaijan, Turkey, Kazakhstan and the European Union. We can take Chinese cargoes in Georgia in 8-10 days in an unprecedentedly short time, and then in different European countries in 3-5 days. ”

“The Silk Road” and the Eurasian Economic Union promoted by Russia, despite assurances from Beijing and Moscow, can hardly be considered complementary, writes RBC. The economic interests of the projects are already facing now: Beijing is concerned about the Customs Union created at the initiative of Moscow, since uniform tariffs for importing Chinese products to the CU countries may negatively affect the prospects for growth in the trade volumes of Kazakhstan and Kyrgyzstan with China.

Of course, we note in conclusion, the initiative of the Silk Road implies a further increase in the volume of trade and investment from the Middle Kingdom. Russia will not survive this competition, especially in its current weak position, when oil prices are plummeting and the ruble is getting cheaper every day.

Another thing is that the United States does not want to strengthen China. But this is different историяunrelated to Russia.