December 17 2015
190
According to some Western analysts, the White House, which takes into account the experience of unsuccessful protracted wars in Iraq and Afghanistan, does not intend to conduct any ground military operations anywhere. If you need to crush a strategic opponent, you can play the economic card, in concert with regional allies. For example, you can beat Russia with its weak raw materials economy, as well as Iran: with active participation in the political game, Saudi Arabia, an ally of the United States, will lower world oil prices even lower. Make it easy: you need to continue to increase the supply with low demand. The Saudis have such a game experience. It was obtained back in 1980's, when the goal was to destabilize the regime of Saddam Hussein. 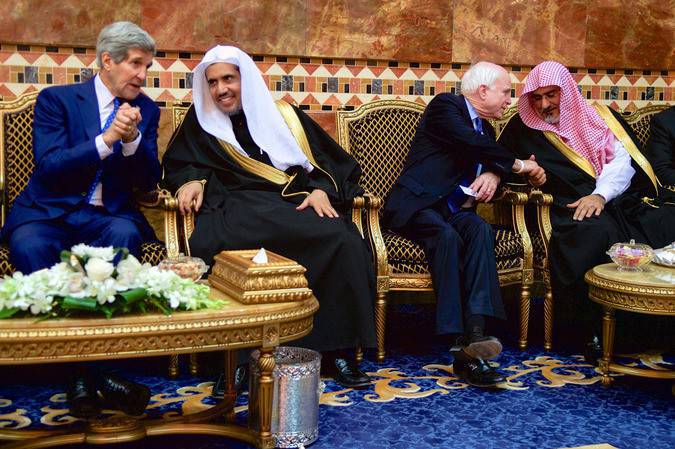 This writes the British journalist Larry Elliott (Larry Elliott) in the newspaper «The Guardian».

If any oil investor at the beginning of 2014 had thought that because of the intensification of terrorist fighters in northern and western Iraq, oil prices would continue to grow and the world economy would further strengthen, he would continue to invest in oil production. And I would be mistaken. Geopolitical tensions in oil-producing areas did not at all lead to an increase in oil prices, and, above all, steady demand for raw materials fell altogether.

The price of oil, which was more than 110 dollars per barrel, quickly collapsed. In the last three months alone, black gold prices have fallen by a quarter. Huge reserves of unclaimed raw materials have accumulated in the vaults - and this happened against the background of the "stumbling" in the process of restoring the global economy and slowing China's growth. To all this, the “new stagnation in the eurozone” has been added, the author writes.

But this is “not all история“, The analyst notes. The fourfold rise in oil prices caused by the Saudi Arabian embargo on oil exports in response to the Doomsday War in 1973 showed how raw materials can be used as diplomatic and economic weapons. History repeats, says the journalist.

What does the Obama administration want today? According to Larry Elliot, the White House wants peace: 1) Tehran must abide by the nuclear program; 2) Vladimir Putin must retreat in eastern Ukraine.

After the recent events in Iraq and Afghanistan, the White House has no desire to stomp foreign land on the boots of its soldiers. But how to dictate the will of their strategic opponents? Very simple: with the help of its ally, Saudi Arabia, Washington is trying to reduce the price of oil. This is done by filling the already crowded market with oil. Both Russians and Iranians are largely dependent on oil exports. And if the price reduction seriously hits them, they will become much more compliant.

There is information according to which US Secretary of State John Kerry allegedly made a deal with King Abdullah (2015 in September), according to which the Saudis will sell oil at a price lower than the market price. This information helps to explain the fact of falling prices amid crises in Iraq and Syria. Usually, in such crises, the opposite happens: the price of oil rises.

Saudi Arabia was already practicing in bringing down prices in the middle of the 1980-s. “Geopolitical motivation” for bringing oil prices down to a level below 10 dollars per barrel was Riyadh’s desire to “destabilize the regime of Saddam Hussein.”

This time, according to experts on the Middle East, Saudi Arabia wants to exert pressure on Iran and force Russia to weaken support for the Assad regime in Syria.

The impact of low prices on the budget of Saudi Arabia itself is still tolerable. Saudis love “gambling”, and they can afford to live at a lower price for much longer than the Russians and Iranians. Therefore, their oil operation will not last long.

There is no doubt, says a British journalist, that “this is a new manifestation of the cold war” hurts Russia. Judge for yourself: trade in crude oil and gas accounts for 70% of Russian exports. The budget of the Russian Federation simply does not work out if the price of oil is not higher than 100 dollars per barrel.

Yes, Moscow has foreign exchange reserves, but they are not unlimited. The ruble fell by 10% just last week. Such inflation dramatically increases the cost of servicing the foreign currency debts of Russian companies. In addition, the Central Bank is "under pressure", forcing him to think about raising interest rates. This decision could help stabilize the currency, but only at the expense of a “deeper economic downturn,” the British economic truths remind.

However, it seems that Russia's foreign policy has not changed. The support of President Bashar al-Assad has remained. As for Ukraine, the press flashed in the press, the journalist writes, about “Russian troops entering eastern Ukraine.”

Iran’s reaction to all this is not yet clear.

For the United States, these oil games look rather difficult. Washington’s willingness to “play the oil card” stems from the conviction that in time the United States will become the largest oil producer in the world. This statement against the background of falling prices may seem strange, especially since we are talking about shale oil, but the Americans care primarily about national security, and not about exporting raw materials, as Russia does. If before there was the country's vulnerability to “global oil shocks”, then the now accumulated “cushion” of shale oil and gas gives Washington confidence in the future.

The United States does produce a huge amount of oil. “Of course, this is impressive,” writes the journalist and recalls the jump in production in the second quarter of 2014 of the year compared to the 2011 of the year by almost 50%: from 5,7 million barrels per day to 8,4 million barrels per day. These numbers clearly show that any reduction in the supply of oil by anyone, including Iran or Russia, due to or without sanctions, will in no way affect the US economy or the global economy. Oil is still a lot.

On the other hand, such a sharp drop in oil prices makes some shale deposits unprofitable. This is “particularly true of newly planned developments where high investments are required to cover initial costs,” the analyst recalls. In short, the “side effect” of the collusion between the United States and Saudi Arabia exists: bringing down oil prices will lead to the bursting of the “shale bubble,” the author believes.

Journalist Larry Elliot seems to have no doubts about the collusion of the Saudis and the Americans, who decided to make Russians more “compliant” by crushing the oil market. True, the analyst does not specify: what time will the “conspirators” need to convince Putin to step back from the ideas of “invading” Ukraine and “supporting the Assad regime”? The economic pressure on Russia with the help of games on the oil market also hits the budget of Saudi Arabia, which depends on oil in the same way as Moscow. Lower prices also lead to the collapse of the American shale oil industry. Probably the whole question is that the Saudis and the United States consider the Russian economy to be much weaker than the economies of Saudi Arabia and the United States. They themselves will survive an indefinite short period, but the Russians will not. This period itself will obviously be determined by the moment when Putin goes back down. Will he go?

Observed and commented on Oleg Chuvakin
- especially for topwar.ru
Ctrl Enter
Noticed oshЫbku Highlight text and press. Ctrl + Enter
We are
Iran in the Syrian conflict. The confrontation with Saudi Arabia and the interests of the ShiitesThe history of the Iraqi Navy. Part of 2. Iran-Iraq War at Sea (1980-1988)
Military Reviewin Yandex News
Military Reviewin Google News
190 comments
Information
Dear reader, to leave comments on the publication, you must sign in.