December 16 2015
174
After speaking for three hours with Vladimir Putin and Sergei Lavrov, US Secretary of State John Kerry said the US has no plans to isolate Russia. Both Kerry and Obama believe that it is not a "freeze" of relations that will lead to progress, but contact with Putin. And this is all the more true since the American press published facts proving Putin's immortality, as well as his ability to travel through time. It turns out that the Russians have been using secret technology for several centuries. historical displacement. 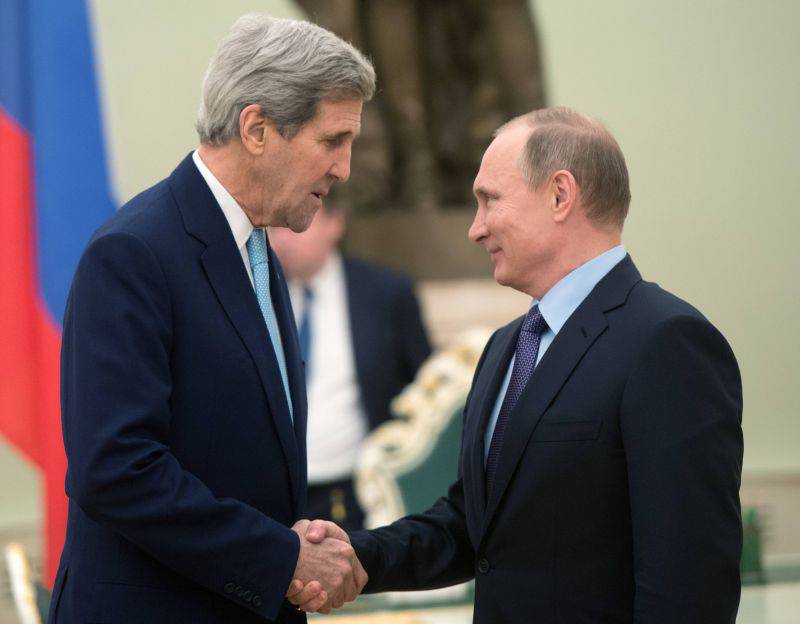 After three-hour talks with Russian President Vladimir Putin and Russian Foreign Minister Sergei Lavrov, US Secretary of State John Kerry said that Washington is not pursuing a policy of isolating Russia.

“We do not have a policy that aims to isolate Russia. No ", - quotes Kerry "Lenta.ru".

According to the Secretary of State, the United States and Russia are looking for “areas of agreement”. Kerry believes that such a search is "a demonstration of the maturity of both leaders and the importance of their role."

Regarding the conflict in Syria, Mr. Kerry reiterated that B. Assad could not remain as president. At the same time, the main person in the State Department told the press that the talks in Moscow were not at all devoted to disagreements between Russia and the United States, but to a political process. Kerry said that Washington and Moscow "brought together positions with regard to these complex issues (determining the list of terrorist groups)."

Michael Crawley in the newspaper "Politico" He noted that the Obama administration is leaning more toward discussions than toward diplomatic confrontation with Russia.

The observer points out that the Obama administration argued about contacting Putin, or, on the contrary, treating him like an “outcast.” The point of view of the first ones who think that contacts are necessary wins. Critics of this position are concerned with the issue of strengthening Putin’s position in the international arena. In their opinion, the president of Russia is very easily seeking meetings with the leadership of the United States. And it helps to strengthen its influence.

The next Moscow visit of the Secretary of State John Kerry is the second meeting with the Russian leader since May 2015, notes Michael Crowley. And these are just Kerry trips. But there were three more personal meetings between Putin and US President Barack Obama (in a very short time, from the end of September).

Opponents of rapprochement with Moscow say that the Kremlin owner used Russia's military intervention in Syria to achieve political goals: he got a “place at the negotiating table”. With regard to the possible outcome of such negotiations, the critics of the Obama administration doubt their usefulness.

However, Obama and Kerry have the opposite opinion.

According to sources of the publication, whose names are not given, Obama and Kerry believe that the political damage from the talks with Putin is small. But "business" contacts with Moscow are much faster than the "freezing" of relations, will lead to progress in the negotiations on a peace agreement in Syria, as well as "Russian aggression" in Ukraine.

There is another point of view.

Those who advocate close contacts with Putin in the United States point to one simple fact: if Putin is “ignored” in the international arena, this will not change his behavior. As a result, the United States will still have to coordinate with Russia when it comes to global security issues.

Next, Crowley quotes David Kramer, who worked at the State Department during the time of Bush Jr. This man oversaw relations with Russia. To the current activities of Kerry and some rapprochement between Washington and the Kremlin, he is very negative. According to the expert, when Kerry "runs" behind Putin and his team, he "reinforces the impression" created by the White House under Obama: that Russia needs the United States more than the United States needs it.

However, officials from the US presidential administration object to such criticism. And their objections are quite reasonable: after all, Putin was at an impasse just because of the sanctions imposed under Obama. As for the "invasion" of Putin in Syria, it did not lead to any obvious results.

In addition, contacts with Putin earlier led to success. According to an unnamed high-ranking official, Obama is dealing with Putin in areas where there is an opportunity to agree. Where it is impossible, the United States will exert pressure. In September 2013, the negotiators Obama and Putin made a deal to destroy the chemical weapons in Syria, and in July 2015 came to a nuclear agreement with Iran. Conflicts on other issues did not prevent the leaders.

The correspondent cited photographic evidence that the Russians had long ago developed a technology for moving living objects in time. One of these objects was ... V. V. Putin. 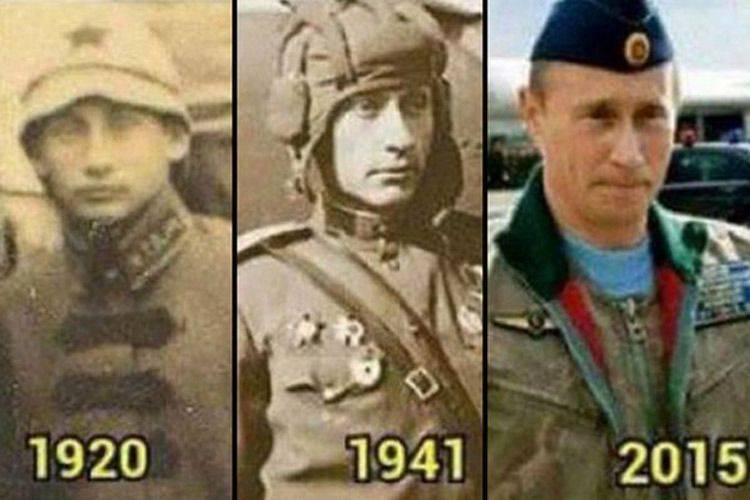 Putin in Time. Photo from the newspaper "New York Post"

Apparently, Putin will not die in the near future, the author of the material believes. He seems to be immortal.

Fragments of three photographs (see above) demonstrate how Russians are able to operate with space and time. Here is a relatively recent photo of Vladimir Putin, and here are two others: one made in 1920, and the other in 1941. The servicemen, captured in the pictures, have “a strange resemblance to the Russian leader,” the journalist states.

Proponents of conspiracy theories, he continues, argue that the conclusion is obvious: "Putin is immortal." At least this person is a “mystical time traveler” and serves “the Russian people for centuries”.

Supporters of the thesis about the omnipotence and immortality of Putin believe that the current president of Russia is "a mythical creature that has been on our planet for hundreds, if not thousands of years."

According to another hypothesis, Putin’s activities began in the time of the 15th century Transylvanian leader, Prince Vlad II, better known as Count Dracula.

"Theorists" agree on one thing: numerous photographs suggest that "the Russian leader has been living in the world for a very long time." Putin’s official date of birth, October 7 1952, is called into question by the theorists.

Well, if this is the case, Obama and Kerry, even if they are alien lizards who arrived from Fomalhaut, are simply forced to come closer to Putin. It is dangerous to play a long game of sanctions with the "immortal". In addition, the cunning Russians, as it turned out, have been traveling through time for several centuries. With cameras. And carefully throw in the appropriate pictures in the American press.

Ctrl Enter
Noticed oshЫbku Highlight text and press. Ctrl + Enter
We are
Situational analysis of the death of the MH17 flight (Malaysian Boeing 777), made on the basis of engineering analysis from 15.08.2014Results of the week. “In our cooperative, the board is always agreed”
Military Reviewin Yandex News
Military Reviewin Google News
174 comments
Information
Dear reader, to leave comments on the publication, you must to register.