December 16 2015
49
The visit of US Secretary of State John Kerry to Moscow and his meeting with Russian President Vladimir Putin can be considered one of the main events of this week. Not by the fact, of course, but by the consequences, which, with any outcome of the negotiations, will be very, very significant. Formally, it was about the implementation of the Minsk agreements, the situation in Syria and the Russian-Turkish conflict. Although the main part of the meeting was devoted to the Syrian war, for the Russians the decisions on Ukraine are more important. The reason is obvious: Syria for the majority of our fellow citizens is about as far as Pluto, and Square for some begins literally under the windows, and no one has canceled family ties. For Americans, the situation is the opposite and the Middle East on their agenda is far more important than the countries of the former USSR. 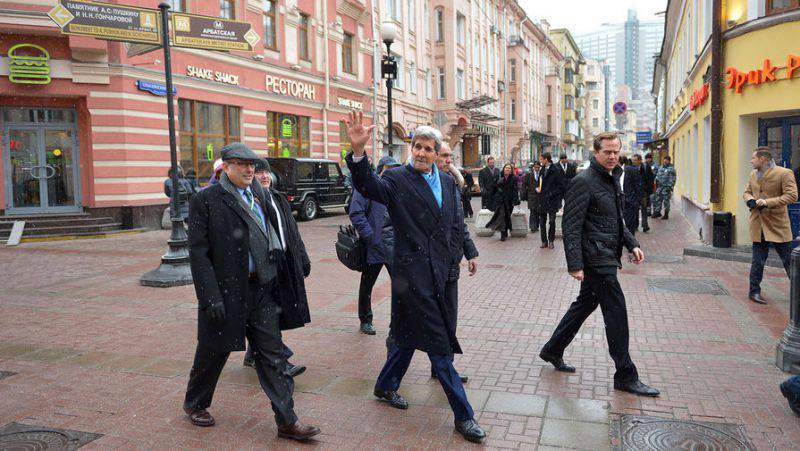 Following the meeting, statements were made that appeared on the tapes already at night. By their nature, it can be assumed that it was not voiced, but implied.

Whether it’s fair or not, today the United States considers itself to be the winning side, therefore, they are trying to impose their conditions on the whole world. In case of failure of any of them, and all the more so, they traditionally pass to threats. And here it is important to analyze what the threats will be, how much each of them is realistically accomplished, and to what extent these threats will be perceived in Russia by the forces on which the adoption of real decisions depends.

Regarding our country, everything in Washington remains the same. The first condition requires the refusal of Moscow’s support for the DPR and the LPR and the earliest transfer of control over the border to Kiev, the second is the complete curtailment of aid to the Syrian government and participation in the American coalition as a fully dependent subject. Perhaps there will be some additional conditions and about them, I suppose, we will soon find out, since public boasting is also an integral element of American policy.

In the event that the Russian leadership refuses to accept such an alignment, there will undoubtedly be threats. For example, we will be promised to bring down oil prices to 30 and even 20 dollars per barrel, while well aware that the real limit of the safety factor of Russia is difficult to measure. The next likely “pugalka” from Kerry is the Ukrainian offensive on the Donbass. She, too, must be divided in two. Yes, the Armed Forces of Ukraine and the National Guard have already patched up the holes left after the battle for Debaltseve, and in the people's republics things are, to put it mildly, not brilliant, but Kiev does not guarantee a military victory. War - the environment is very uncertain, and very much in it depends on the morale of the people that are in the trenches and combat vehicles. So the US secretary of state is counting more on the old rule, which states that "the threat is more effective than its execution."

Of course, our guest also has gingerbread. In the role of the gingerbread will perform ... no, not the folding of all sanctions, but only the consideration of the possibility (!) Of the abolition of some of them, as was frankly stated. That is, under the guise of tasty treats inedible plastic fake is hidden. If someone doubts the seriousness of our "partners", then he can remember how many years they have canceled the famous Jackson-Vanik amendment, and at the same time they can ask how the sanctions against Cuba are being lifted.

Now everything depends on the reaction of President Putin. According to the Minsk agreements, both the Russian Federation and the Donbass did almost everything they could, while Kiev was not going to do this in principle. The transfer of the border in such conditions is in fact an unconditional surrender both for Donetsk and Lugansk and for Moscow. So there’s obviously something to think about.

If the American ultimatums are rejected in whole or in part, then there is no doubt that Kiev will receive the backbone to defrost the conflict from across the ocean: according to reports from Donbass. on the Ukrainian side, preparations for an offensive are in full swing and field hospitals are deployed.

Washington has built the situation in such a way that the benefit for the United States is seen even in the event of the defeat of the Ukrainian army: in this case, you can either bring the outspoken Nazis to power or plunge Ukraine into chaos. Under any scenario, this country will remain a source of threats for Russia, to curb which will leave a huge amount of resources.

The Foreign Ministry trap perfectly aware, hence the appeals Lavrov influence Kiev. It is unlikely that the words will have an effect, here it’s rather a necessary ritual: we have warned that our conscience is clear. A reserve is being created in the event that the next talks have to be acquired by the Ministry of Defense.

This is all really important, and not how many dolls and ear-flaps John Kerry bought in souvenir shops on the streets of the capital.

Ctrl Enter
Noticed oshЫbku Highlight text and press. Ctrl + Enter
We are
Results of the week. “Again your ego has been itching.”"Pathological liar" from the State Department
49 comments
Information
Dear reader, to leave comments on the publication, you must to register.