"From a dead donkey ears" to them, not contributions (to the Council of Europe)

December 16 2015
172
The Ministry of Foreign Affairs and the Ministry of Finance of Russia on the eve decided on the need to jointly discuss the question of the procedure for the payment by the Russian Federation of membership fees to the Council of Europe (CoE). Today’s Council of Europe consists of such structures as the Parliamentary Assembly (PACE), the European Court of Human Rights (ECHR), the Committee of Ministers of Foreign Affairs, as well as advisory bodies, including the Venice Commission studying the constitutional rights of the CoE states.


It should be recalled that for some time (or more precisely, since the spring of 2014), the powers of the Russian delegations at once in several organs of the Council of Europe have been substantially curtailed. In some cases, Russia was deprived of the word and the right to vote, and in some for the representatives of the Russian delegation, the right of an advisory member was left, in other words, the right of statisticians who can sit in the hall solely for a tick - the attendance tick in the Council of Europe bodies.

The most interesting thing is that, having limited Russia in powers, the European "partners" did not even think about taking care of reducing the membership fees paid by the Russian Federation. Usually it was not at all customary to talk about these contributions at all, for by the same Ministry of Finance of the Russian Federation it was considered that they (contributions) were “not so high”. However, in reality, payments made by Russia to the treasury of the Council of Europe look very impressive.

Thus, the fixed contribution of Russia to the CE in recent years has amounted to no less than 23 million euros per year. If you translate this amount into rubles at the current rate, you get more than 1,75 billion rubles. For comparison, this figure corresponds, for example, to the annual revenue (without subsidies and subsidies) of the budget of the resort city of Anapa. Or is it, for example, the sum of expenses for education in 2015 in a Russian city like Blagoveshchensk.

That is, Russia is being stifled by sanctions, delegations in international bodies are deprived of their legal rights, but at the same time the money continues to be pulled out of the Russian budget, although this money could well go to support domestic Russian initiatives, including educational or recreational. It is unlikely that any constituent entity of the Russian Federation would refuse “extra” 1,75 billion rubles of budget revenues. But for the time being these revenues are leaving the Eurocrats, who are already crossing all the borders in attempts to annoy Russia.

It seems that the Russian government finally paid attention to this and decided to think about revising the amount of membership dues to the Council of Europe structures, in which Russia openly trying to silence and constantly move in the direction of the corner - supposedly guilty - stand here, but entrance fee still pay us regularly.

The emergence of a federal constitutional law in the Russian Federation, which allows it to ignore the decisions of the ECHR, if they will be contrary to the Basic Law of Russia, has plunged European “partners” into dismay. From Jagland’s statement:
The compatibility of decisions taken by Strasbourg (ECHR - author's note) and national constitutions is checked in some countries, such as Germany, Italy or Austria. Until today, these countries have always found a solution in accordance with the (European) Convention. This should be possible in Russia. Russia must comply with Article 46 of the European Convention on Human Rights.

This article says that all Member States of the Council of Europe undertake to abide by the final judgment of the Strasbourg court. Yeah ... 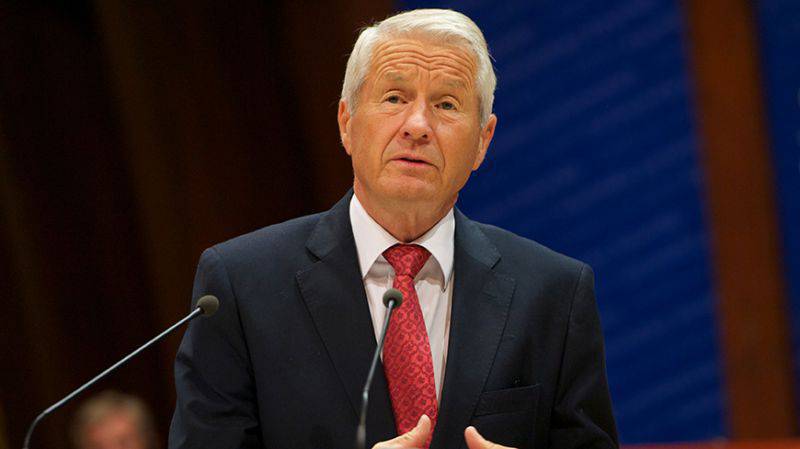 Concerned about Russia's decision to Jagland

What did the Russian side answer to this cry Yagland? Officially, nothing ... After all, as already noted, the Russian delegation, for example, in PACE, is deprived of the right to vote and “can afford” except for backstage comments. That is, ironically (and the fate in this situation is clearly making fun of the same Jagland), the Secretary General of the Council of Europe did not hear the official response in the PACE for the simple reason that his players deprived Russia of their right to vote.

It remains to wait for how this soloist Jagland will sing along with the rest of the choir of ìdemocraticî Europeans, when Russia really decides that instead of paying 23 million euros of contributions to the Council of Europe, send a package with great Ryazan horseradish or ìears from a dead donkeyî .

Ctrl Enter
Noticed oshЫbku Highlight text and press. Ctrl + Enter
We are
Results of the week. "In the Greek Hall, in the Greek Hall ... the mouse is white!"PACE knows who is to blame for the Ukrainian conflict
172 comments
Information
Dear reader, to leave comments on the publication, you must to register.