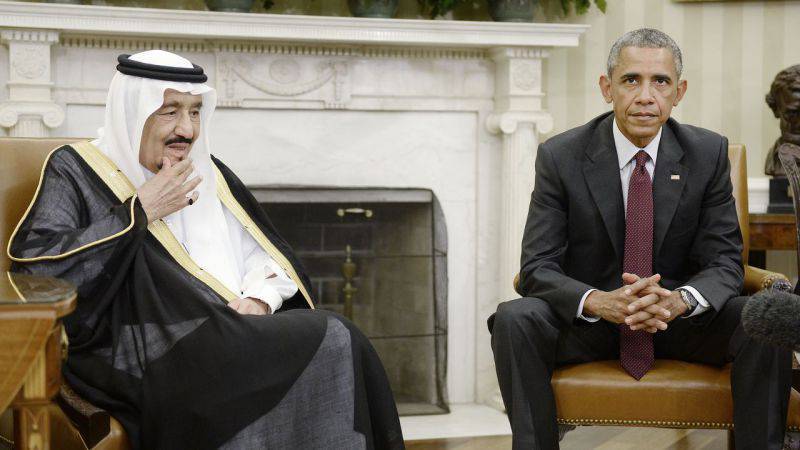 In the plans of the West to establish control over the Middle East, Saudi Arabia plays a special role. The role is not a wordless extras, but the main artist. Hands Riyadh mechanisms are in place, on which the "free world" squeamish Mara. Unfortunately, this role of the Arab monarchy is understood in Russia not all ...

One of the major mistakes of Russian foreign policy is the inability to separate the "wheat from the chaff." Or, in other words, to decide on who is a true ally of the country, who is a temporary companion, and who is an adversary who, no matter how enticing him, look at that, put a knife in the back.

Recall how much effort was made to push Belarus away! Endless trade wars, pressure, down to outright insults - this was the attitude of Moscow to the closest ally.

Conversely, before the tragic incident with the Su-24 aircraft, Turkey was portrayed as a true friend of Russia. Although NATO membership, support for Islamists in Syria, provocative statements on the Crimea, etc. not just talking - shouting! - on the contrary. The result is logical. The “friend” turned out to be the enemy, while the federal media do not spare paints for the portrayal of the Turkish authorities.

The reasons for such inconsistency lie on the surface. Corporate interests are often replaced by state interests in Russian diplomacy, and the benefit for a narrow circle of businessmen is given out for the benefit of the whole country. Such a substitution is fraught with failures, all the more dangerous because the opponents of Russia use any of its failures for new strikes.

However, judging by the latest events, the lesson from the Su-24 incident in Moscow was not learned. Two days after this event, the 4th meeting of the Russian-Saudi intergovernmental commission on trade, economic and scientific-technical cooperation was held in Moscow. His results exceeded all expectations. According to the co-chairman of the intergovernmental commission, Energy Minister Alexander Novak, Riyadh is ready to invest billions of dollars in infrastructure projects in Russia. Here and agriculture, and housing and utilities, and industry. The first steps have already been taken: the Russian direct investment fund and the sovereign fund of Saudi Arabia have agreed to establish a long-term strategic partnership in the amount of 10 billion dollars, a memorandum of cooperation in agriculture has been signed. In the near future, direct flights between the countries will be established, a significant simplification of the visa regime is planned. In addition, Russian companies Gazprom, Inter RAO and Renova have announced their interest in entering the Saudi market (pay special attention to this!).

But cooperation is not limited to purely peaceful areas. Moscow and Riyadh are discussing the supply of Russian weapons to the kingdom, including the Iskander operational tactical complexes, 20382 corvettes, and others. The volume of the deal can reach 10 billions of dollars. As expected, it will be concluded during the visit to Russia of the King of Saudi Arabia Salman al-Saud.

On the different sides of the barricades

Strengthening ties with Riyadh, the Russian leadership is attacking the Turkish "rake" when the ghostly perspective of the "Turkish Stream" forced them to turn a blind eye to Ankara's uniquely provocative actions.

Meanwhile, the Saudi authorities do not hide their hostile attitude towards Russia and its allies - Syria and Iran. Let's start with the economic sphere. Launching the process of a sharp decline in oil prices, the kingdom authorities beat Moscow and Tehran, which, like Riyadh, did not have a “financial pillow” in the form of 700 billions of dollars in foreign reserves. The Saudis do not intend to abandon this policy. According to oil minister Ali an-Nuaymi, the dumping will continue until "inefficient producers leave the market."

Having dealt the first blow with more than a twofold decrease in prices, Saudi Arabia embarked on the second stage - the seizure of oil markets. Riyadh began supplying fuel at lower prices to Poland and Sweden, which are traditional importers of Russian raw materials. The head of Rosneft, Igor Sechin, called it "active dumping." There was no other reaction from Russia.

In military-political issues, Saudi Arabia also stands out from hostile positions. At the end of November, the Foreign Minister of the Kingdom, Adel al-Jubeir, stated that a military solution to the Syrian conflict remains on the agenda. “We will continue to support the opposition, which is fighting the regime of Bashar al-Assad,” he added. Very specifically perceive in the kingdom and the peace plan, developed in Vienna. By the end of the year, a meeting of representatives of various groups of the Syrian opposition should take place in Riyadh. Saudi authorities will try to form a single bloc of them to participate in negotiations with Damascus. However, as Al-Jubeir stressed, the purpose of these negotiations will be the "elimination of Assad."

The operation of the Russian air force in Syria is also extremely negative here. According to the Saudi authorities, this leads to an escalation of the conflict and the strengthening of terrorist organizations. That is what is stated in the resolution adopted by the UN Human Rights Committee on the initiative of Riyadh.

The hypocrisy of the Saudi authorities just rolls over. “Dzhebhat an-Nusru”, recognized as a terrorist organization in Russia, they openly support with money and weapons. The kingdom is officially denied assistance to the “Islamic State” in the kingdom, but at the same time they are not going to suppress the financing of “IG” by various Saudi foundations and private individuals. As for the participation of Riyadh and its allies in the coalition against the Islamists, it was formal from the very beginning, and now completely frozen. Recent Departures aviation Saudi Arabia committed in September, Bahrain - in February, the UAE - in March.

In other words, Riyadh is on the other side of the barricades and, the farther away, the more actively it resists the actions of Russia. According to military expert Alexei Leonkov, it was American and Saudi aircraft that followed the downed Su-24 and transferred its coordinates to the Turkish fighter.

Despite this, the attitude towards Saudi Arabia in the Russian media space cannot be called negative. Moreover, in recent months, more and more materials have appeared, frankly idealizing the policy pursued by the kingdom. This suggests the existence of a pro-Saudi lobby in the Russian establishment.

Such a strategy can greatly harm Moscow, worsening its relations with much more consistent partners. As is known, Riyadh considers Iran its main enemy and makes every effort to weaken it. Often, the actions of the authorities of the kingdom pass all conceivable boundaries. In November, more than 50 people were sentenced to death here. Not for the killings, not for terrorism - but for participating in demonstrations that swept through the Shiite areas of the country in 2011. The requirements of equality were regarded by the Saudi leadership as an attempt to overthrow the state system. Among those condemned to execution are the influential Shiite theologian, Sheikh Nimr an-Nimr, and his nephew, who barely turned 19 years old. Medieval savagery is the way of future execution - beheading followed by crucifixion. All this is a clear signal to Iran, which in Riyadh is accused of trying to destabilize the Shiite areas.

In general, the elementary rights and freedoms in the absolute monarchy, which is Saudi Arabia, are being trampled upon at every turn. Recently the poet Ashraf Fayyad was sentenced to death here, all the charges against which are based on the testimony of a witness who allegedly heard from his mouth curses against Allah. Penalty for witchcraft and apostasy are commonplace for the country.

Crush during the 24 hajj of September of this year became a terrible tragedy. According to the latest data, over 2 thousands of people have become its victims. The most likely reason was the appearance in the area of ​​the motorcade of the Minister of Defense, the vice heir of the Saudi throne, Mohammed ibn Salman, which led to the blocking of roads. The investigation of the tragedy was “lowered on the brakes”, and the Iranian delegation, which was going to fly to the kingdom to identify the bodies of the dead and bring them home, was denied visas by the Saudi authorities.

Why the “free world” closes eyes to these crimes is clear: Riyadh is a key ally of Washington. But for what reason does Russia not react?

Equally difficult to understand the indifference with which the country's leadership relates to the war crimes of Saudi Arabia in Yemen. There are so many of them that it’s fit not only to apply to the International Criminal Court, but also to demand the creation of a separate international tribunal. Coalition aviation, which includes Saudi Arabia, Qatar, the United Arab Emirates and a number of other countries, destroys everything. Recent examples include the bombing of the Doctors Without Borders organization and a school for girls in the city of Sa'ada. At the same time, the Arab coalition uses prohibited cluster munitions and impedes the delivery of humanitarian aid. Recently, Riyadh closed the airspace for the aircraft of the Russian Ministry of Emergency Situations, which delivered humanitarian aid to Sana'a.

Despite the obvious superiority in strength (thousands of soldiers of the regular armies of the Arab monarchies, as well as mercenaries from African countries) are fighting against the Hussite rebels in Yemen, the coalition is failing. In recent weeks, the Hussites were able to regain control of the provinces of Taiz, Marib, El-Beida and Al-Dali. From Aden - the main stronghold of the puppet government of Mansur Hadi and the supporters who support him - the entire 30 kilometers separates them.

Most likely, in the very near future, the coalition will be forced to agree to negotiations and fulfill the demands of the rebels, among which are equal rights for the Shiite minority and economic reforms. In this case, the Hussites will become a powerful political force in Yemen, and Russia could get a new ally in a key region from a geopolitical point of view. However, all attempts of the Hussites to enlist the support of Moscow (where delegations from Yemen came several times) ended in nothing. For the sake of maintaining partnerships with Riyadh, Russia rejected the stretched hand ...

Meanwhile, one can’t count on the benefits of strengthening relations with Saudi Arabia. Riyadh is tied to Washington by too close a 70-year bond to embark on an independent voyage. Moreover, the military-political cooperation between the absolute monarchy and the "free world" is only intensifying. Recently, a deal was concluded on the supply to the kingdom of 4 warships from the United States in the amount of $ 11 billion, as well as 22 thousand bombs worth $ 1,3 billion. And in Bahrain, which is called the fourteenth province of Saudi Arabia, the laying of the British naval base took place, which will allow "the fleet Her Majesties' constantly present in the Persian Gulf.

These steps are aimed at achieving complete control over the Middle East. In this sense, the hopes for the establishment of allied relations between Moscow and Riyadh are an illusion. And the sooner this is understood in the Kremlin, the better.

Ctrl Enter
Noticed oshЫbku Highlight text and press. Ctrl + Enter
We are
Iran in the Syrian conflict. The confrontation with Saudi Arabia and the interests of the ShiitesAir Force and Saudi Arabia
19 comments
Information
Dear reader, to leave comments on the publication, you must to register.