December 22 2015
2
The eightieth years of the last century were a time of rapid development of domestic armored repair and recovery vehicles. In just a few years, various enterprises of the Soviet defense industry have developed a number of projects of such equipment based on various serial chassis. It was assumed that such an approach to the creation of new BREM will simplify their manufacture and operation. One of the results of the use of such ideas was the appearance of a repair and recovery vehicle based on the BTR-80 armored personnel carrier.


The development of the armored troop-carrier BREM project started in the mid-eighties as part of the project with the code "Tribesman". In addition, it was proposed the additional designation BREM-K ("Armored repair and recovery vehicle, wheeled"). The development of the car was entrusted to the Gorky Automobile Plant, which was actively engaged in the subject of wheeled armored vehicles. At the enterprise, the project received a factory GAZ-59033 index. The project was led by A. Masyagin. The creation of a wheeled BREM project did not take long, which was facilitated by the use of a production serial chassis. Due to this, the construction of the prototype BREM-K began already in 1988 year.

In accordance with the technical specifications, the BREM-K vehicle was to be used by repair units of motorized rifle formations equipped with BTR-80 armored personnel carriers or vehicles based on them. This was due to the choice of chassis. Also with the type, characteristics and features of the combat use of this technique were associated with some other requirements for the repair and recovery vehicle. It was necessary to ensure the possibility of pulling stuck damaged armored vehicles with their subsequent towing to the place of collection or repair. It was also necessary to equip the BREM-K with a set of equipment to provide towing and minor repairs. 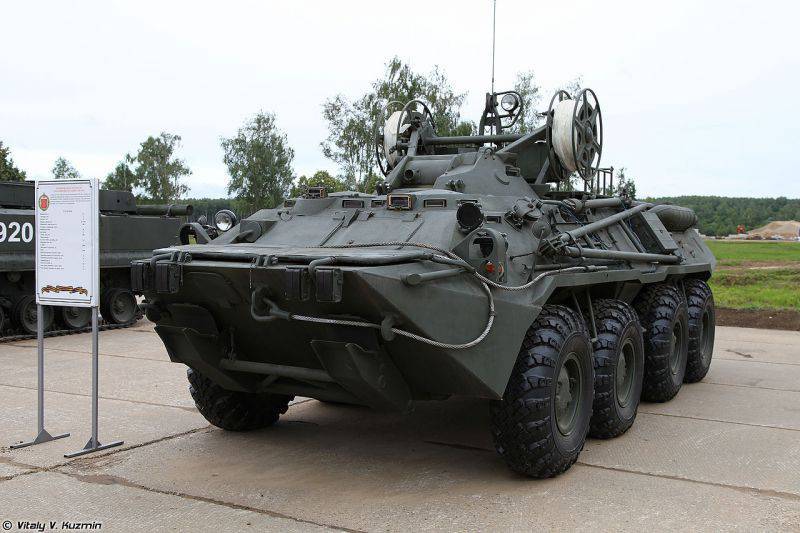 The use of the finished chassis, borrowed from the serial armored vehicles, has greatly simplified and accelerated the development of the repair and recovery vehicle. For this reason, BREM-K retains the overall layout of the predecessor, although it differs in the composition of the equipment and other features. So, in front of the case, as before, there is a department of management with jobs for the driver and commander. Behind them is a turret with weapons and some special equipment. Feed was still assigned to the engine compartment.

BREM-K inherited a welded body made of steel rolled sheets with a thickness from 10 mm (forehead) to 7 mm (other parts). This hull design provides protection from small arms. weapons and splinters of some artillery ammunition. Thus, a promising repair and recovery vehicle could operate in the same conditions as the armored personnel carriers it serves.

In addition to armor, BREM-K retained part of the armament of the base machine. On the roof of the hull there was a turret in the form of a truncated cone with the installation of 1500 cartridges for the PKT machine gun with ammunition. On the back of the tower were six smoke grenade launchers. The case contains several embrasures for firing from the crew’s personal weapons. As a result, the repair vehicle is protected from firing from small arms, has the ability to fire back, and in case the enemy uses more powerful weapon systems, it is equipped with a smoke screen installation system.

The KamAZ-7403 diesel engine with 260 horsepower is mounted in the aft engine compartment. With the help of a mechanical transmission, the engine torque is distributed to all eight driving wheels. At the same time, it is possible to disable two axles, after which the wheel formula is changed to 8x4. The running gear has eight wheels with an individual torsion suspension, reinforced by hydraulic shock absorbers. 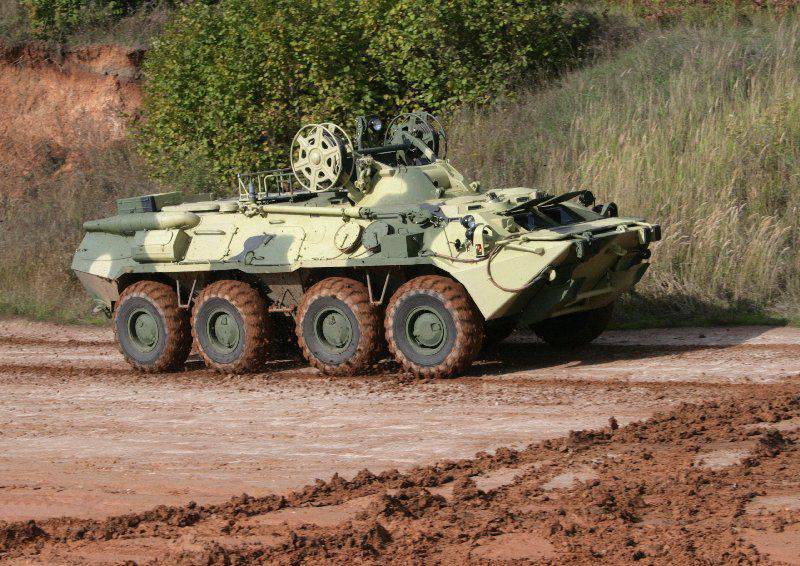 The car at the site. Photo Amz.ru

The BREM-K crew consists of four people: a commander, a driver, an equipment specialist, and an arrow. In this case, all crew members during repair work perform certain tasks. The commander and driver have their own hatches in the roof, equipped with periscopic viewing devices. Outside the battlefield to observe the road, they can use large windshields. Two other crew members must fall into place through the side doors of the hull. The dimensions of the former troop compartment, partly occupied by the new equipment, allow the repair and recovery vehicle to take out the crew of damaged equipment from the battlefield.

To perform the tasks associated with the transportation and repair of damaged military equipment, BREM-K has a set of equipment, part of which is located outside the hull. At the same time, in view of the limitations imposed by the design of the base armored personnel carrier, some new ideas were used in the “Tribe” project, because of which the wheeled BREM differs from other domestic vehicles of its class.

On the lower frontal parts of the body is a thrust device, which has in its composition two openers. Due to the similar construction of this equipment, BREM-K cannot carry out excavation work. Nevertheless, the machine is securely held in place during other operations. The coulters are lowered and raised using a hydraulic drive controlled from the driver’s workplace. The stop device is used when towing damaged machinery using a traction winch, as well as when working with a crane. 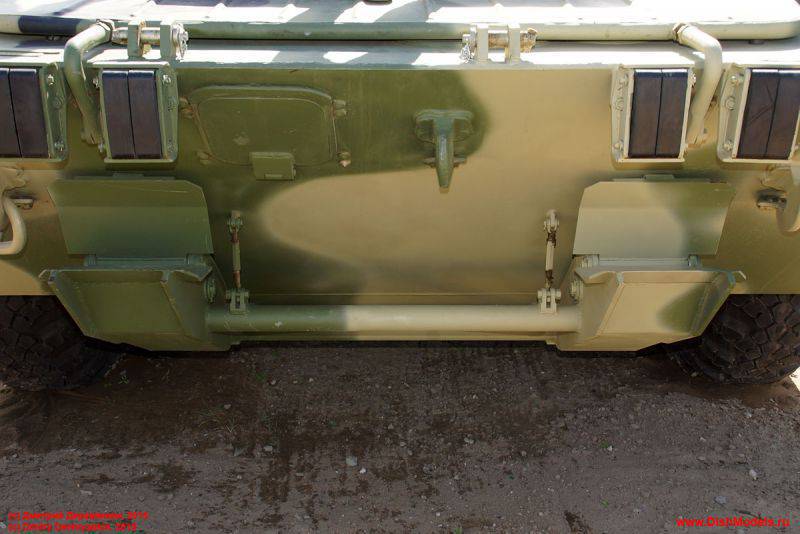 Front plate with a flap for winch cable and stop device. Photo Dishmodels.ru

On the upper side sheets of the hull are provided for mounting for various equipment used in the performance of tasks. On the left side of the fixed removable boom crane and one of the elements of the rigid towing device. On the starboard side, the second part of the tug, the tackle blocks, etc. are transported. Also on board is transported entrenching tool borrowed from the base armored personnel carrier.

In the lower frontal part of the body provides a small square hatch through which the issuance of the cable traction winch. For pulling the stuck machine BREM-K should take the most comfortable position, lower the stop device and use the traction winch cable. The winch itself, located inside the body of the machine, develops tractive effort at the level of the 4,4-6 vehicle. To increase this parameter, you should use a polyspast, with the help of which the force is brought to 15 tf. Traction winch is equipped with a metal cable length 75 m.

Some noticeable changes have undergone the design of the tower base armored personnel carrier. Two articulated booms were added to its front surface, and a large construction with a hand winch and storage boxes appeared at the stern. For lifting and moving loads weighing up to 800 kg it is proposed to use the so-called. swivel hand tap. In this case, an arrow mounted in the form of a triangular frame with a roller is installed on the front fastenings of the tower. In the desired position, the boom is held with cables attached to the hooks of the tower. The winch is responsible for lifting the load. 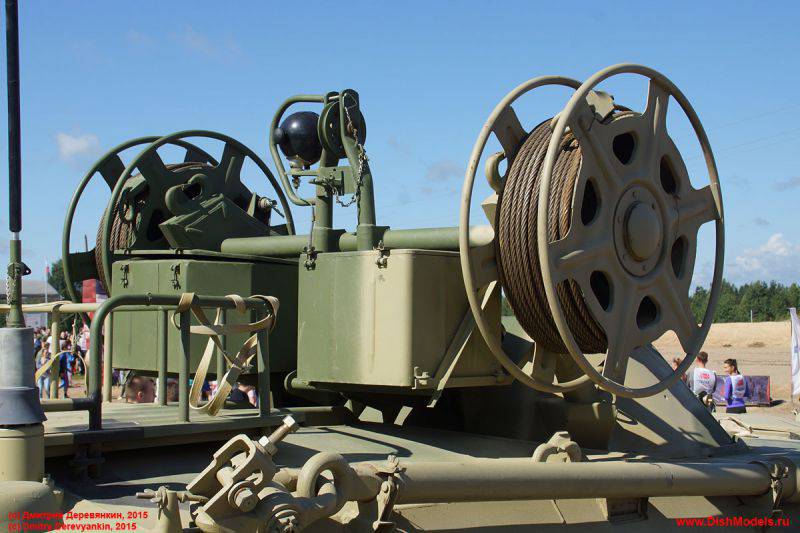 Due to the actuators turning the tower such a crane can turn in any direction and lift the load of the corresponding mass. The maximum lifting height is 4 m. It is proposed to use a rotary hand crane when performing minor repairs when the weight of the moving elements does not exceed the characteristics of the winch.

If it is necessary to lift and move heavier loads, use a non-turn crane. In this case, the boom of the crane is mounted on the fastenings of the upper frontal sheet and is fixed with an inclination forward with the help of tension cables. To lift loads in this mode, a traction winch is used. When installing the boom, the cable coming out of the head hatch is passed through it and transferred through the upper roller. The fixed crane does not allow the load to be moved without moving the whole machine, and the maximum lifting height is reduced to 3,8 m along the hook. However, the slewing crane has a load capacity of 1,5 tf, which allows you to perform work that is impossible for a slewing crane with a manual winch.

BREM-K has the ability to tow damaged equipment of its weight category, for which it is equipped with the appropriate equipment. For towing unmanaged vehicles it is proposed to use a rigid coupling device consisting of two rods with fasteners. In other cases, it is possible to use two metal cables with a length of 5 m. 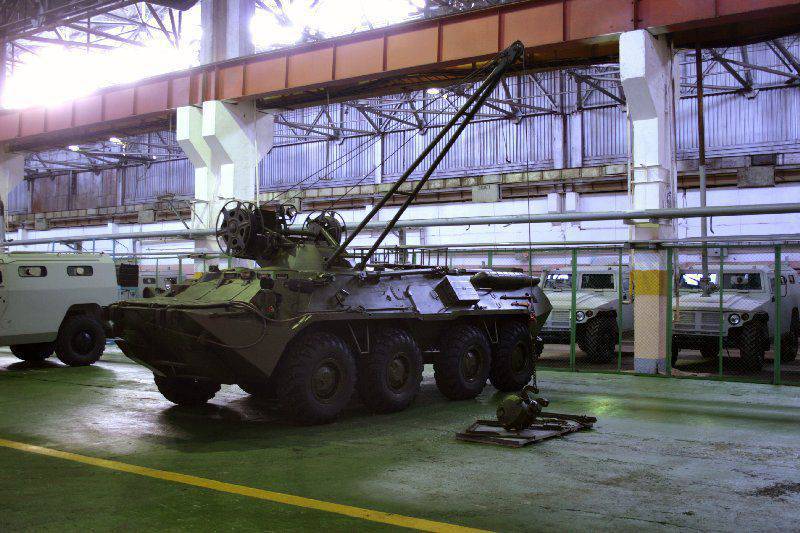 Behind the tower on the roof of the hull provides a platform with lattice sides for the transport of spare parts, tools and other goods. On the platform it is possible to transport 500 kg of cargo. In addition, some tools, etc. can be transported inside the enclosure.

For the implementation of minor repairs in the field, the crew of the BREM-K has a set of necessary keys and other tools. The machine also has its own electric welding equipment, which is proposed to be used for welding and cutting parts from ferrous metals. A generator DG-304УЗ is connected to the engine of the machine, which produces a welding current from 45 to 400 A.

Despite all the improvements and the installation of new equipment, the dimensions of the BREM-K are generally consistent with the parameters of the base BTR-80. The total length of the machine is 7,7 m, the width is 2,95 m, and the maximum height (over the top elements of the winch on the tower) has increased to 3 m. The total weight of the machine, excluding spare parts on the platform, is 14,5 t.

Due to the preservation of the dimensions and weight, the mobility of the repair and recovery vehicle remained at the level of the base sample. The maximum speed on the highway exceeds 80 km / h. On the water with a water jet, BREM-K accelerates to 9 km / h. Cruising on the highway reaches 600 km. If necessary, towing damaged machinery maximum speed and power reserve are reduced depending on various factors. In this case, the machine can tow damaged equipment not only by land, but also, at some preparations, by water. 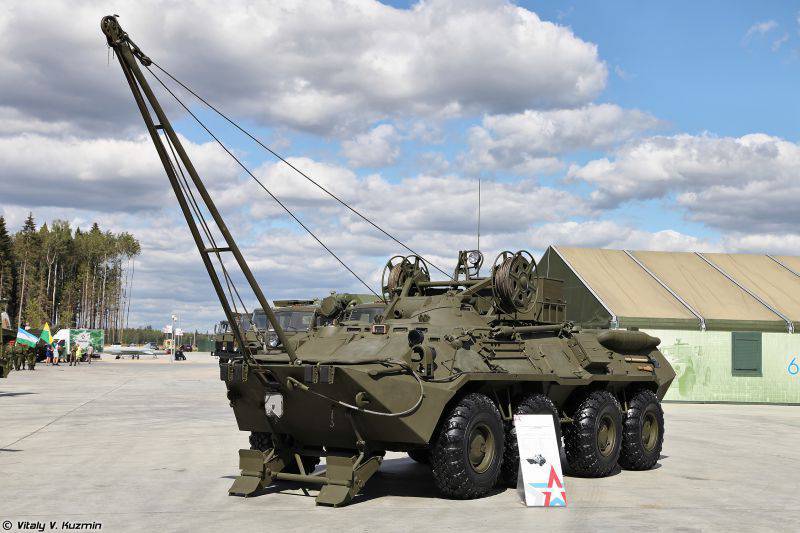 Demonstration of the machine with a fixed valve. Photo by Vitalykuzmin.net

The first prototype of the "Armored repair and recovery vehicle, wheeled" was built in 1988 year. The next few years went on to test and refine the promising machine. The collapse of the Soviet Union led to some complications, but could not completely stop the work on BREM-K. The result of the work was the order to adopt this machine, signed in 1993 year.

Soon after the adoption of the BREM-K was put into series. The problems of the nineties strongly affected the capabilities of the army, because of which the volume of orders for the supply of all new equipment, including repair machines, left much to be desired. Nevertheless, even in the most difficult years, a number of auxiliary machines were built and delivered to the customer. The production of BREM-K was carried out at the Gorky Automobile and Arzamas machine-building plants.

According to available data, the Russian armed forces currently have a fairly large fleet of repair and recovery vehicles based on the BTR-80. This technique is used to service all available wheeled armored personnel carriers, and also from time to time becomes a participant in various events, such as parades or exhibitions. The characteristics of the BREM-K were determined taking into account the need to work with armored personnel carriers BTR-80 and older models. The armed forces have a large number of similar armored vehicles, which suggests the preservation of BREM-K in the ranks for a long time.