Angela Merkel: "We will not do this"

December 16 2015
11
German Chancellor Angela Merkel in a recent interview with the German media reported that the operation of the Bundeswehr in Syria is legal from the point of view of international law, since the "Islamic state" is a threat to Europe and all democracies. However, Berlin is still against direct participation in the fight against this terrorist group. The head of the German government excludes the use of ground forces. “We will not do this in Syria,” she unequivocally put it. 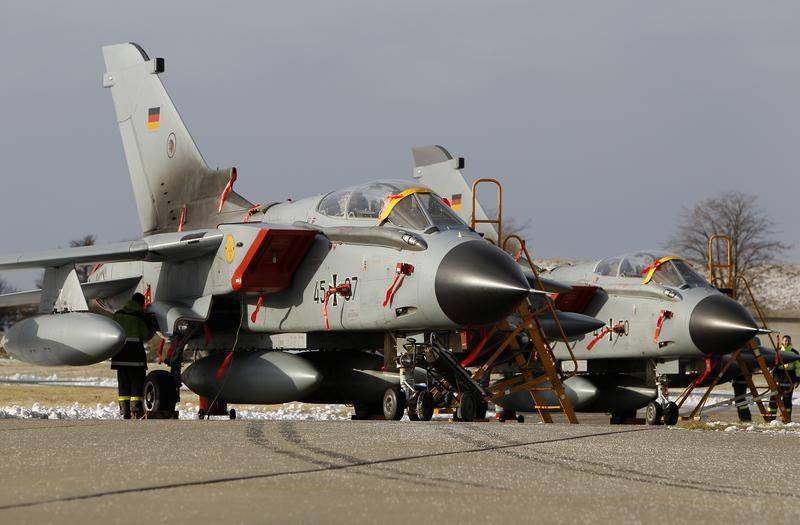 Recall 4 December, the German parliament allowed the participation of the Bundeswehr in a military operation in Syria. However, it is not a land operation. The one-year mission will involve Tornado fighters, tanker aircraft and a frigate. The number of military who can participate in the new operation is limited to a maximum of 1200 people.

The Syrian operation of the armed forces of Germany, according to international law, is legal, because the Islamic State group poses a direct threat to Europe and free democracies, said Angela Merkel in an interview with two newspapers: Augsburger Allgemeine and Badische noyeste nachrichten.

As transmits TASS, Angela Merkel noted that “it is wrong to speak about a change of course” regarding the dispatch of the German military to Syria. After all, Berlin had previously been against direct participation in the fight against IG. Nevertheless, some "crucial" changes occurred: "Actually, the decision to supply weapons Kurdish formations in Iraq to fight the "IG" and their training. " Merkel added: “After the terrorist attacks in Paris, France asked for help because these attacks were an attack on all free democracies. These are the reasons why we, legally from the point of view of international law, extended our military mission from Iraq to Syria. ”

As for the discussed use of German ground forces in the SAR, the Chancellor rejects this idea. “We will not do this in Syria,” she said. At the same time, Frau Merkel noted that political and diplomatic means should be used as far as possible to resolve the conflict.

However, even the limited participation of the Bundeswehr in the mission in Syria, accompanied by Angela Merkel’s refusal from the ground operation, has caused poisonous criticism from the opposition in the parliament.

The head of the Left Party parliamentary faction, Sarah Wagenknecht, called the Chancellor’s promise of military assistance to the French in the fight against IG an “irresponsible” decision. Sarah’s argument concerns the security of Germany itself: “Anyone who sends a Tornado to Syria contributes to the emergence of a greater number of terrorists and increases the risk of terrorist acts in Germany.” In addition, Wagenknecht, whose words are quoted by TASS, is confident that the cabinet of ministers of Germany "did not draw conclusions from military operations in Iraq, Afghanistan and Libya."

Angela Merkel in one interview did not stop.

“I believe that Germany fulfills its part of its obligations, and that we should not now talk about new issues in this regard on these days,” said Frau Chancellor in an interview on ZDF (quoted by Newsru.com).

There is also the American component of the issue.

As the Spiegel weekly reported, US Secretary of Defense Ashton Carter addressed the German counterpart, Ursula von der Lyayen. The head of the Pentagon in writing proposed to increase the German contingent in the framework of the antiterrorist coalition in the Middle East. Angela Merkel gently commented on this American idea, making it clear that Germany already does a lot.

“I got the impression that the United States, just like France, the United Kingdom and other countries, welcomed our decision to actively assist in the fight against IG now in Syria,” the Chancellor of Newsru.com cites the words.

“And I think that our efforts in Iraq have already achieved a lot,” Merkel said.

It is becoming obvious, let us add, that Merkel’s latest decision on the use of Tornadoes, tankers and frigates in Syria, along with the military 1200, is the maximum that Berlin can offer in the declared “support of the French” (against which the opposition in the face of the Left).

It is also clear that Angela Merkel will not go in the wake of the Pentagon, a great lover of war across the ocean with someone else's hands.

Finally, it can be assumed that the coalition of forces in the Middle East, led by the United States, was at an impasse. Arab monarchies fight the terrorists with the desire not to burn for a long time; relatively active force are only France and the States. (Speaking of the latter, one should remember their humane bombings of smuggling oil tankers and inhuman attacks on water pipes used not by terrorists but by civilians.) In such conditions, Berlin will not change the previous course. Americans love it when others shit after them. But how much can Europe step on this rake?

The actions of Angela Merkel were assessed by Russian experts.

Stanislav Tarasov, director of the Middle East-Caucasus Research Center at the International Institute of the Newest States, believes that "military assistance from the Federal Republic of Germany turned out to be symbolic, and its presence in Syria is very conditional." "On December 10, the first two Tornadoes of the German air force headed from the airfield in the town of Yagel to Turkey, where they will be deployed on the basis of the Incirlik," the expert explained "Free Press". - However, German planes will start reconnaissance flights only in January 2016. In addition, on Thursday military aircraft A400M flew to Turkey with 40 German soldiers on board. All this can hardly be called serious military involvement. ”

“The reason that makes Berlin act in this vein is perhaps that the actions in the Syrian theater of the USA, France and Russia recreate the image of the Entente. And as it is known, the Entente in the years of the First World War opposed the "Triple Alliance" of Germany, Austria-Hungary and Italy, in which Germany played the key role. By the way, after the victory in the First World Entente (except, of course, the Bolshevik Russia, which emerged from this military-political bloc) was engaged in the division of the Ottoman Empire.

In other words, the presence of Germans in the Middle East causes quite definite geopolitical associations, and frankly negative properties. ”

According to Tarasov, there is one more reason why Merkel “is trying to stay on the periphery of the international coalition”: the German Chancellor cannot find a common language with Vladimir Putin just in the Middle East direction.

The expert recalled that Angela Merkel said that the alliance between Germany and Russia (albeit within a coalition) speech can not go. Meanwhile, French President Hollande recently announced that France and Russia agreed to ensure coordination between their departments in the operations carried out in Syria by Moscow and Paris. The expert is also inclined to attribute such a difference in the positions of these states to a comparison with the distribution of forces in the First World War.

“Merkel, above all, understands the background of the events in Syria, and therefore acts prudently,” Mikhail Alexandrov, a leading expert at the Center for Military-Political Research at MGIMO, told Free Press. - The background lies in the fact that the “Islamic State” did not arise from scratch - it is the creature of the United States, Turkey and the monarchies of the Persian Gulf. Therefore, in Syria, from the point of view of Berlin, a geopolitical game is going on, and not at all a struggle against international terrorism. And if so, why would the FRG participate in this alien game, spend money on it and risk the lives of its servicemen? ”

According to Alexandrov, the Germans are taking only "symbolic" and "forced" steps in the Syrian operation.

Experts agree on the assessment of the participation of the German forces in a coalition led by the United States. All the actions of Angela Merkel fit into the framework of the forced response to the American "requests" and the requirements of the "world community" about the "struggle" with the "IG". Cleaning up the dirt for the Americans and getting into the war in the Middle East for a long time, while simultaneously tackling the crisis with migrants, is such a difficult task for an economically strong Germany.

And even such modest actions of the chancellor, who had decided “symbolically” to help the French in Syria, met with a barrage of criticism from the left opposition in the German parliament. The head of the parliamentary faction of the Left Party, Sarah Wagenknecht, directly called the decision of the Chancellor "irresponsible", arguing his opinion about the likelihood of terrorist attacks in Germany.

Observed and commented on Oleg Chuvakin
- especially for topwar.ru
Ctrl Enter
Noticed oshЫbku Highlight text and press. Ctrl + Enter
We are
Results of the week. “Everything will go like clockwork: at first — in the evenings — singing, then pipes will burst in the toilets ...”New propaganda center of the Bundeswehr
11 comments
Information
Dear reader, to leave comments on the publication, you must to register.