December 16 2015
63
The main question for today: the Bandera Krajina will bury the Minsk agreements quietly, that is, after the formal expiration of their 31 December, or defiantly, having arranged the New Year war in the Donbass, writing off their next zrady as a bonus. So that no one has any questions about whether “Minsk” is alive or dead. And there was no need to explain to Paris and Berlin about the “oral agreements” on the extension of the Minsk agreements. 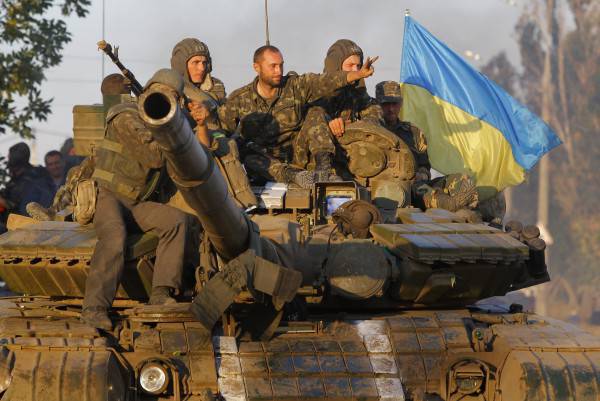 The problem for Kiev is that it needs a small war and not a “general” war, which many analysts wrote about, however, it is not known how Donbass and Russia will react to such war games. Alexander Khodakovsky, one of the responsible leaders of the DPR, recently directly hinted that if Russian troops really entered the Donbass, they would not even stop on the Dnieper ...

The second possible option: the scenario of the 2015 winter campaign of the year will repeat, that is, the front will generally remain in place, with some exceptions, as happened in Debaltseve. On this option, most likely, and count Bandera. And “Minsk” to break, and not to suffer much.

Moscow, apparently, is aware of these far-sighted plans, and makes warning diplomatic shots. The Russian Foreign Ministry announced, literally the other day, that the legitimacy of the Kiev authorities is in doubt. In the case of a power failure of the Minsk agreements ...

Moscow can declare Bandera power is not legitimate, and even criminal, Bandera-Nazi, and will require a regime change in Kiev as a condition for the termination of the offensive of the armed forces of New Russia. This will be a mirror response to the actions of the United States in Syria in relation to Bashar Assad.

Actually, all the legitimacy of Banderia rests, for Moscow, on the Minsk agreements, if they are denounced, Moscow will have free hands with respect to the usurpers of power in Kiev, who staged a coup d'etat and establish the Nazi order in the country.

This means a new round of confrontation with Washington, however, what can he do? More sanctions ... But Russia is no longer scared, and perhaps that is why US Secretary of State John Kerry, at the urgent request of Washington, urgently arrives in Moscow on December 15. Notice, not Moscow offered this meeting ...

Russia seems to have completed the initial stage of preparation for military operations, conducted a military review in Syria, and is not afraid of anything and anyone. President Vladimir Putin, speaking to a military audience (!), Said that the videoconferencing system in Syria should operate extremely rigidly, any threatening targets should be immediately destroyed. Any ... And, perhaps, this order means not only Syria.

In the current situation, Russia has a serious geopolitical advantage over America: both areas where there is an active confrontation, both Syrian and Ukrainian, are close to Russia, but far from America, beyond the “big puddle”. This is a decisive circumstance.

America has crept up to our borders, and Russia, in general, has nothing to lose, but there are opportunities for a counterstrike. Americans must get away from our borders. They do not want in the good, according to the Minsk agreements, it will be in a bad way. That could be the beginning of the New 2016 of the year.

In Kiev, US Vice President Joe Biden said, along with the stupidity of democracy and the cancer of corruption, that Bandera democracy is just an experiment, whether it is possible to make Europeans out of Bandera. And he finished really badly: “You have to manage your own destiny”. That is, up to whatever you manage, though with our help, is the responsibility on yourself.

Moreover, Biden called for the federalization of Ukraine according to the US model, that is, the implementation of the Minsk Agreements, including the holding of a broad amnesty, that Bandera Kiev rejects a whole year from the threshold, that politically death is like for him. What is it? - surprised and Bandera Rada. And this is a dilemma: either Minsk will have to be executed, or you will be tearing down Minsk, here and now or never. Biden brought the last of his warning, or an ultimatum.

There is a third option, according to expert Mikhail Alexandrov, but also unenviable: Banderia will collapse as a result of growing chaos, Maidan are no longer relevant. The expert oligarch Taruta reported on the same, his mathematical model assigns Krajina 6-8 months of life to Krajina. Political scientist Rostislav Ischenko believes that Krajina has already begun to crumble into poorly managed parts: Transcarpathia, Lviv, Dnipropetrovsk, Kharkiv, Krivoi Rog, they are less and less connected with Kiev. Such different people, and everyone says, in general, the same thing.

Interestingly, the US Department of State 15 asked the Americans not to visit the Crimea, Donetsk and Lugansk regions, and those who are there to leave them. Usually such warnings are made on the eve of the outbreak of hostilities.

Ctrl Enter
Noticed oshЫbku Highlight text and press. Ctrl + Enter
We are
Laughter through tears: did Khodakovsky ruin the chapel too?Situational analysis of the death of the MH17 flight (Malaysian Boeing 777), made on the basis of engineering analysis from 15.08.2014
Military Reviewin Yandex News
Military Reviewin Google News
63 comments
Information
Dear reader, to leave comments on the publication, you must to register.