Kazimir Semenovich - the founder of rocket technology from the 17th century

December 15 2015
29
If you ask anyone with whom, in his opinion, is connected история development of rocket technology, he almost certainly calls you at least the name of Konstantin Tsiolkovsky. However, in the history there are almost forgotten people today who talked about prototype missiles long before the beginning of the 20th century. One of these people is the mysterious Kazimir Semenovich, military engineer of the Grand Duchy of Lithuania. Semenovich was a theoretician of artillery; in 1650, he wrote the book “The Great Mastery of Artillery”, which was already ahead of its time. Also, Kazimir Semenovich was the inventor of the prototype multi-stage rocket.


This character is one of the most mysterious figures of the Grand Duchy of Lithuania. Scientists have been arguing about its nationality for more than one hundred years. Even the dates of his birth and death (1600 — 1651's) are known today only approximately. For scientists, this is no less a mystery than the nationality of a theoretical scientist, who already in the seventeenth century wrote about the creation of missiles and charges to them. The degree of his relationship today is disputed between Poland, Belarus and Lithuania. Each side pulls the blanket over itself, writing down Kazimir Semenovich to his compatriots.

By its origin, Semenovich belonged to the gentry, but which one is the question. According to one version, his family estate was located in the Vitebsk region, on the territory of modern Belarus. It is believed that the arms of his kind was the noble arms of Ostoy. At the same time, Polish historiography calls Kazimir Semenovich a Polish engineer and a polonized gentry. At the same time, the Lithuanians claim that he was born within the borders of Zhmudi in the family of the poor Lithuanian gentry coat of arms of Osto. And according to Belarusian historians, he was born not far from Dubrovna, in a family of small Russian princes Semenovich. 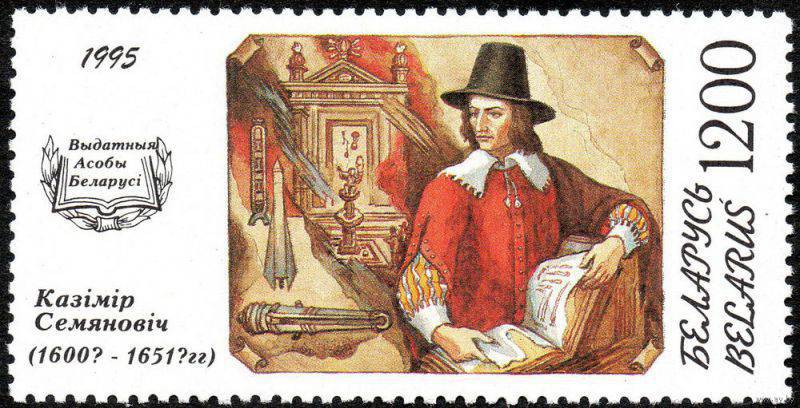 According to some specialists in the field of linguistics, some lexical features really speak in favor of the fact that he was Belarusian. Casimir himself in his works avoided the place of his birth by the side, at the same time calling himself a Litvin nobleman. There is also a version that the right to print the coat of arms of Osto in his book, he simply acquired in the hope of increasing his own popularity.

The main work of his life was the book “The Great Art of Artillery. Part One ”, which was published in 1650 year in the Netherlands at the Jan Janson’s Printing Office. In this book he laid the foundations of rocket science long before they were formulated by scholars of the twentieth century. This work was devoted to both theory and practical use of artillery and pyrotechnics. For almost two centuries after writing, this book was the basis of the European art of warfare, being a respected textbook on artillery science. The work written by Kazimir Semenovich in Latin ("Artis Magnae Artilleriae pars prima"), made him, in fact, the predecessor of modern rocket science. In this book, among other things, he described the principle of multi-stage rockets, cited drawings of volley fire systems and the delta-wing stabilizer. All this he wrote and published even 250 years before the appearance of the works of Tsiolkovsky.

Today it is difficult to judge, but, most likely, Kazimir Semenovich studied at the Vilna Academy, but there is no exact confirmation of this. However, there is no doubt that this was a man with great knowledge in various fields. His knowledge was in the spirit of the Renaissance, which required universal geniuses: in addition to chemistry, physics, optics, hydraulics and acoustics, he studied many arts, both mechanical and free. Apparently, he was well acquainted with sculpture, visual arts, foundry and engraving. About his education and love of reading is the fact that in his book he refers to more than 200 works by various authors.

It is now known that Kazimir Semenovich took part in at least two battles. Thus, it can be said that he was related to military service in the troops of the Commonwealth. It is known that in 1647, he received the position of engineer of the crown artillery. But even before that, he appeared to be in the service. The first known case from his military career was participation in the siege of the White fortress (today located on the territory of the Tver region in Russia), which lasted from March 22 to May 27 1634 of the year and ended with the victory of a small Russian garrison. He wrote about this siege as a direct witness of events, without specifying what role he was playing at that time. Some historians believe that Kazimir Semenovich took part in the entire Smolensk war of 1632-1634, but this is difficult to confirm with facts. 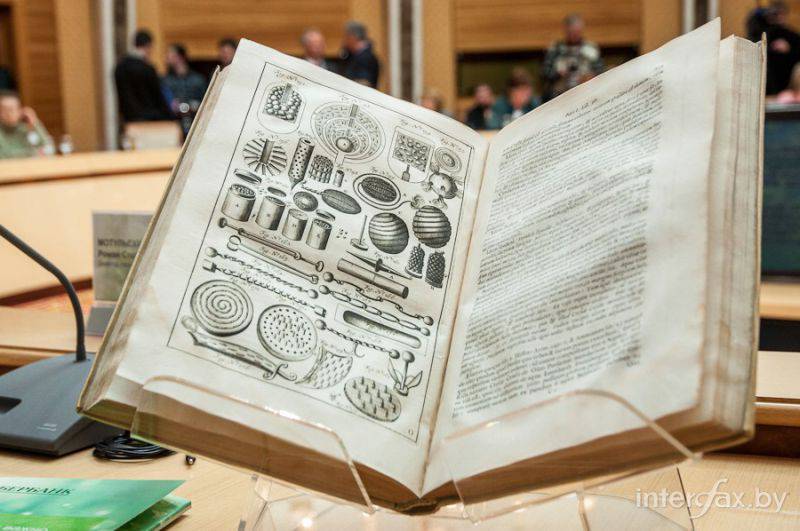 The second well-known participation of Semenovich in battles was the battle with the Crimean Tatars near Akhmatova, which occurred on January 30, 1644 of the year (today is the territory of Cherkasy region of Ukraine). On the course of this battle, he also spoke in the first person. Perhaps at this time, Casimir was in the artillery of the crown hetman Stanislav Konetspolsky. Speaking about this battle, he noted that Tatar pyrotechnicians covered their troops' retreat with a thick smoke screen.

It is known that in Holland Semenovich was at least twice. The first time, it seems, was sent there by King Vladislav IV. He served in the Duke Frederick of Orange, took part in the Spanish-Dutch war, including the siege of Huyst, which occurred in 1645 year. He returned to the territory of the Commonwealth in 1646, when King Vladislav IV began to gather artillery specialists throughout Europe to wage a big war with the Turks. Since then, he served in the crown artillery, with 1648, he was deputy chief. According to the advice of the new king Jan-Casimir, around 1649, he returned to the Netherlands to print his artillery work there. According to another version, he was forced to leave the country because of a conflict with his immediate superior, K. Artashevsky, who accused Kazimir Semenovich of misappropriation of money.

One way or another, once again in the Netherlands, Kazimir Semenovich wrote a book in which he tried to summarize all the accumulated military experience in the use of artillery and systematize the knowledge gained. Prior to that, he was quite actively learning the available literature not only on military affairs, but also on history, culture, pyrotechnics, and communicated with gun manufacturers and fireworks manufacturers. While still in the service of King Vladislav IV, he independently carried out experiments and experiments on internal and external ballistics, carried out launches of missiles designed by him. It is not surprising that in the end he set himself the task of creating a literary work that would allow us to tie together the practice with the theory and summarize all the accumulated knowledge and achievements of the exact sciences of those years.

In his treatise “The Great Art of Artillery,” the author collected 304 pages of material, including 22 prints and 206 various drawings. The engravings were made according to the sketches of the author himself by the famous Dutch engraver Jacob van Meyers. This work has become a real textbook for gunners, combining the accumulated knowledge and experience with the original thoughts and best practices of Kazimir Semenovich. Some sections of this book are well ahead of their time. In particular, in the work was a description and production technology of several dozen models of various aircraft. 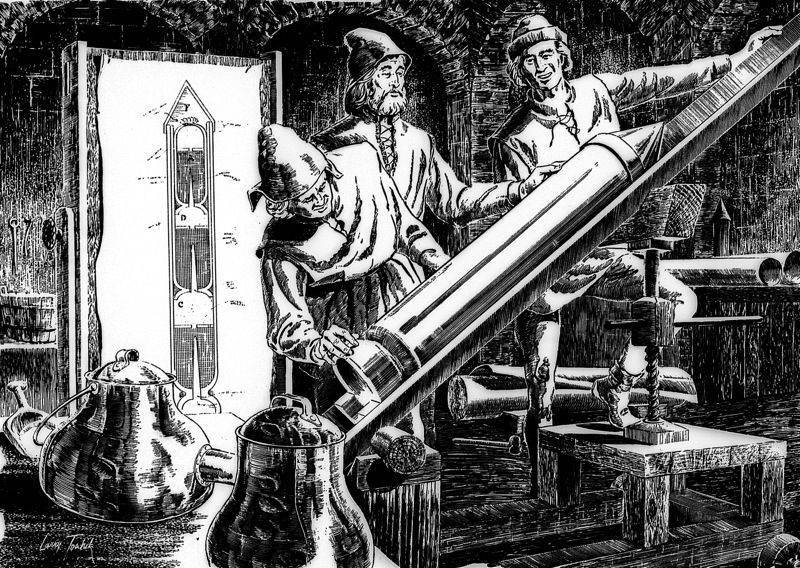 The popularity of the book in Europe for two centuries due to its encyclopedic. Semenovich managed to create the quintessence of the technical knowledge of his time, which he successfully combined with the observations of ancient philosophers and scientists. His work was characterized by compressed, extractive and very accurate information on the creation of a variety of hand grenades, rockets and crackers - their main characteristics, materials and tools necessary for production. In the work of Kazimir Semenovich there was a place for the description of rockets and charges of different types. He described rockets from products with a stabilizing pole to "cruise" missiles. He also spoke about his theory of creating a "prototype of a multi-stage rocket." If he could in one form or another learn some of the principles of the structure and types of missiles he listed in the sources of information available to him, then the concept of a multi-stage rocket certainly became his breakthrough invention. Before him, no one has ever described such mechanisms. He proposed the concept of a multi-stage rocket combines three elements: “The largest rocket of the first stage should be filled with weaker material than its size requires, the other two have their own task so that the third one can rise up by means of them».

It is not surprising that for the contemporaries of the author and for today's scholars, the 5 chapter, which was called “De Rocketis”, represented the greatest interest in his book. On the pages of this chapter, the scientist presented his vision of a multi-stage rocket, which was a modification of a composite rocket with autonomous rocket engines, which were positioned one after the other and worked in turns. Each of the three composite missiles had its own fuel, igniter and nozzle. The scientist assumed that after the combustion of the fuel in the first stage, it would fall off and fall to the ground. Next, the powder in the second stage was set on fire, which would also fall to the ground after burning all the fuel. Then the fuel will light up in the third stage, all this time the rocket must rise up.

But a multistage rocket is not the only thing that Kazimir Semenovich proposed. He became a developer of delta-type stabilizers. Prior to this, in order to give the rocket stabilization during the flight, a special long pole was attached to it, which was equal to 7-8 to the hull size of the rocket itself. At the same time, Semenovich proposed abandoning the pole and attaching special triangular wings to the rocket. These stabilizing wings are still used today in modern rocket production. 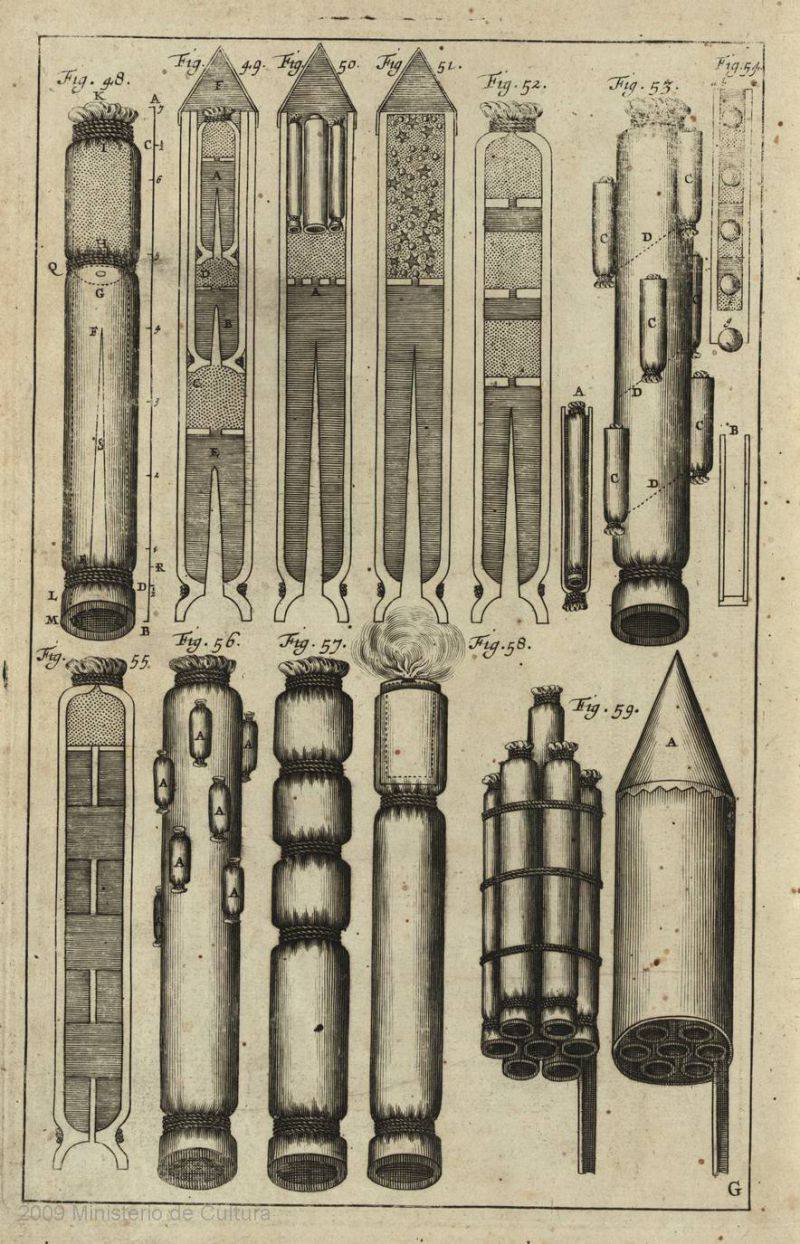 In all, his book had 7 chapters. The rest of them were devoted to artillery and pyrotechnics. They outlined the classification and detailed description of the nuclei, contained a detailed account of the equipment and mechanisms used by European artillery masters, gave ways to calculate the mass and radius of the nuclei made from various materials, ways to determine the caliber of artillery pieces. Semenovich also described a method of obtaining the only known in that century of explosive, the so-called black powder.

His extensive and detailed work was translated into many languages ​​of European countries and reprinted many times. For one and a half centuries, he generally remained the only European artillery training manual. It is known that Kazimir Semenovich managed to prepare to death the second part of his book, which was to contain a detailed history of the development of artillery from the ancient world to the days of its life. However, this book has not survived to this day, although there was information that even at the beginning of the 20th century it was kept in St. Petersburg in the library of the Artillery Museum.

At one time, according to the book of Kazimir Semenovich, Newton studied, the Russian emperor Peter I and French Napoleon I. Tsiolkovsky, the father and founder of Russian cosmonautics, directly referred to Kazimir Semenovich in some of his works. And the US space agency NASA calls Semenovich one of the founders of the entire rocket technology.

Ctrl Enter
Noticed oshЫbku Highlight text and press. Ctrl + Enter
We are
Father of astronauticsPirates of the West Indies and the Indian Ocean of the second half of the XVII - early XVIII centuries
Military Reviewin Yandex News
Military Reviewin Google News
29 comments
Information
Dear reader, to leave comments on the publication, you must to register.