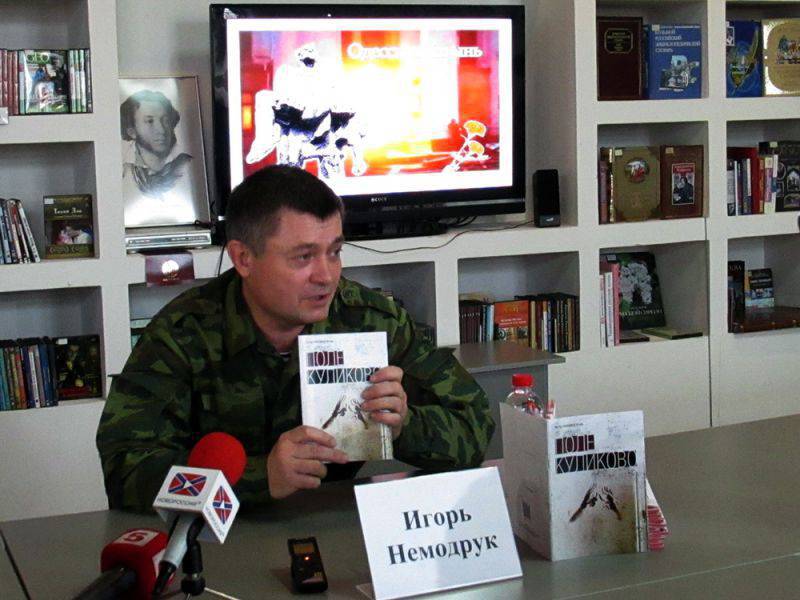 “People say that on the fortieth day the cranes once again circled over the Kulikovo field,” Igor Nemodruk finished his story in Odessa. And there is no need to explain what it is about ... These tragic events that took place on 2 on May 2014, for a long time, will hurt in the hearts of not only Russians, but also Ukrainians, except, of course, those who are mad with Russophobic propaganda. and neo-fascist ideas. Even in the West, many honest people shuddered in those days, seeing behind the propaganda tinsel the true appearance of a monster, ready to burn everything alive in its path. 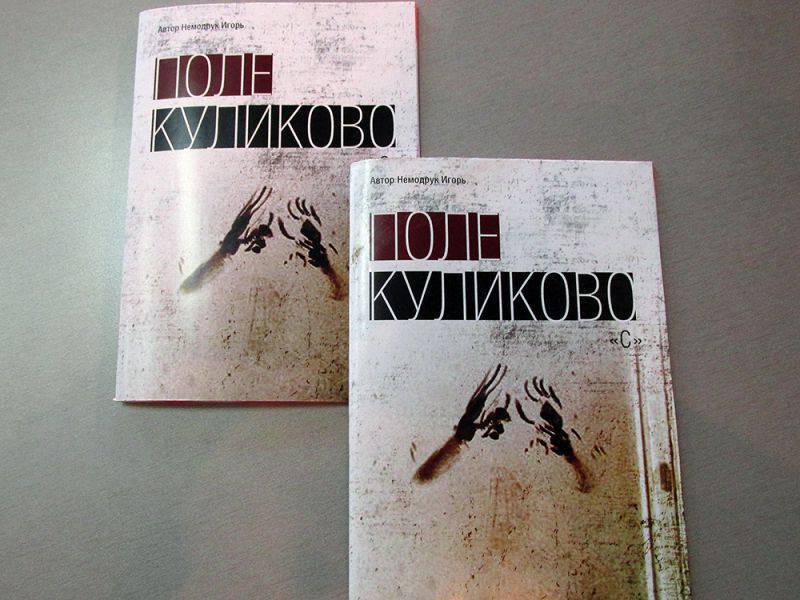 Many readers of “Military Review”, who follow articles from Donetsk, are already familiar with Igor Nemodruk - one of the heroes of the material “Participants of the Odessa resistance: “We had to go to the new Kulikovo battle". A native of Donbass (specifically, the Luhansk region), he moved to Odessa many years ago, and today he was again on the land of Donbas. This time - in Donetsk, where he is one of the defenders of the young Republic.

In the days of the Russian Spring, he was an active participant in a camp on the Kulikovo Field in Odessa. Miraculously survived on May 2 in a terrible slaughter, although he was severely beaten by right-wing men. It so happened that the paddy wagon, who had come to arrest him and other comrades, was a salvation from death, which took the form of sadistic radicals.

“Odessa law enforcement agencies are heavily cleaned,” says Igor at the presentation of his book “The Field Kulikovo”. - And then, right after May 2, there were a lot of sympathizers among the police and prosecutors. Now they are not. "

The presentation took place on December 10 in the Russian World Foundation in the Donetsk Republican Scientific Library. N.K.Krupskoy. The hall was full. A lot of journalists came, including the legendary Graham Phillips.

This book, according to the author, although written in art form, but based solely on real events. Only changed the names of some characters.

The main character of the story, Igor (to whom the author, of course, gave his features), experienced a serious personal drama several months ago — his former wife and, at her instigation, his children refused to talk to him. Now he met a girl he loved. But duty forces him to go there - to Kulikovo Field. At first, everyone is enthusiastic, they believe in victory.

Among the friends of the main character there was a split. Some - in the same place, on the Kulikovo field. However, there is one who supports the Maidan and is happy to show his photos, where he is "heroic" in Kiev. Igor tries to explain something to him: “You are a fool, Seva. And you are a fool and your whole Maidan is frantic ... There was such a good country - Ukraine. But she was attacked by the Maidan. Like a mad dog. Attacked! Bitten! And that's it! There is no Ukraine. ”

1 May Igor went to a barbecue with his girlfriend, but they did not let them rest easy - right from there he was called for a general gathering. After all, the arrival of pravosekov was known in advance.

This is how the author describes the situation that reigned on Kulikovo Field when they were still alive: “Everyone was excited and everyone smiled at each other. Smiled about and for no reason, just meeting his eyes. Greater smiles could be observed except April 1 on Humorine. Well, or in the "House of Clowns" during the performance. But then the smiles were of a different quality. They were added to the St. George ribbons, they were as an additional sign of identification. They seemed to say: “We are of the same blood with you, you and I!”

And - in full contrast to these smiles - the invasion of the Pravoseks: “At first, lonely figures flashed among the trees, they quickly approached, running from tree to tree, they were already thicker behind them, then the stream poured. It rushed like a mud avalanche, along a lane in continuous mass, and flowing through the square between the trees. Above him stood the roar of human voices, in which it was difficult to isolate something meaningful, some individual words or phrases. All shouts and cries merged into a solid, saturated with hatred and anger hum. "

We all know the terrible outcome of that battle. So this event opened with a presentation on the verses of the poet Vadim Negaturov, who was not destined to survive that day, May 2. The memory of the fallen was honored with a minute of silence.

“We knew that pravoseki were traveling,” said Igor Nemodruk. - Two weeks before these events, the regional authorities began to exaggerate the question that our camp should move out. It was motivated by the fact that soon 9 May, the Victory Parade will be held, and our tents interfere. Although they stood apart and did not particularly interfere. We were offered various "gingerbread" - promised to give the car, to transport to the outskirts of Odessa, select products. Several organizations agreed, but most remained on the Kulikovo Field.

He added: “The enemies have very well chosen the time. Maevka, people are scattered around the dachas, rest. ”

According to him, when the train arrived with pravosekami - it was not an ordinary passenger train, but a specially designated one. Supposedly the fans came to the match, but most of them were determined to fight. They had equipment - knee pads, elbow pads, helmets. But the participants of the Kulikovo field did not assume that it would come to murder. They thought it would be just a fight. Were ready for the fact that there will be broken teeth, broken limbs. 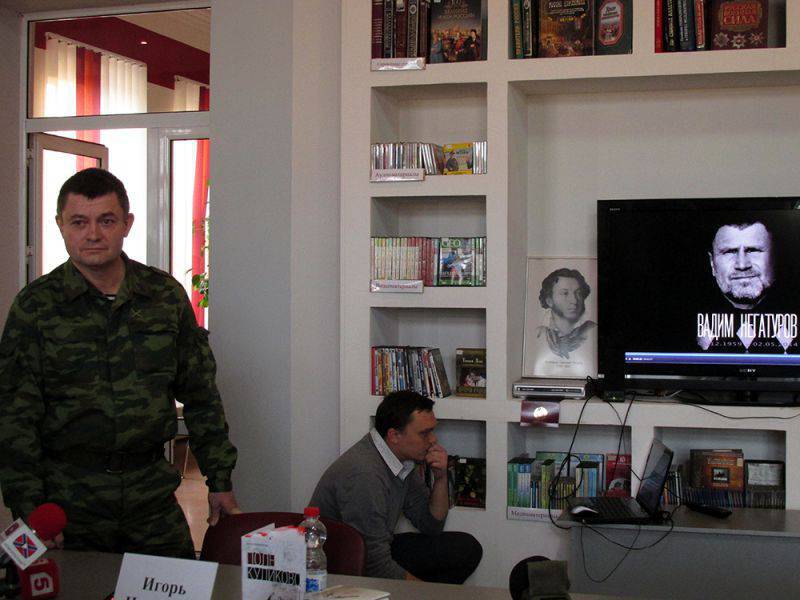 But the reality was much worse ...

Nemodruk also said that on the eve of 2 in May Parubiy came to Odessa, who at that time was the chairman of the National Security Council. Not the very last person in the state. And he personally handed the outfit to the commander of the Pravosek squad. Then this squad finished off those who tried to escape from the fire.

When asked about the number of victims, the author of the book Kulikovo Field replied that there were many more dead than the authorities reported. But you can't say for sure - there was no opportunity to count. “One comrade, who then went to Lugansk, said that on the 3 number he and his wife went before the train to Kulikovo Field and saw the unknown people loading dead bodies into the trunk of a car.” 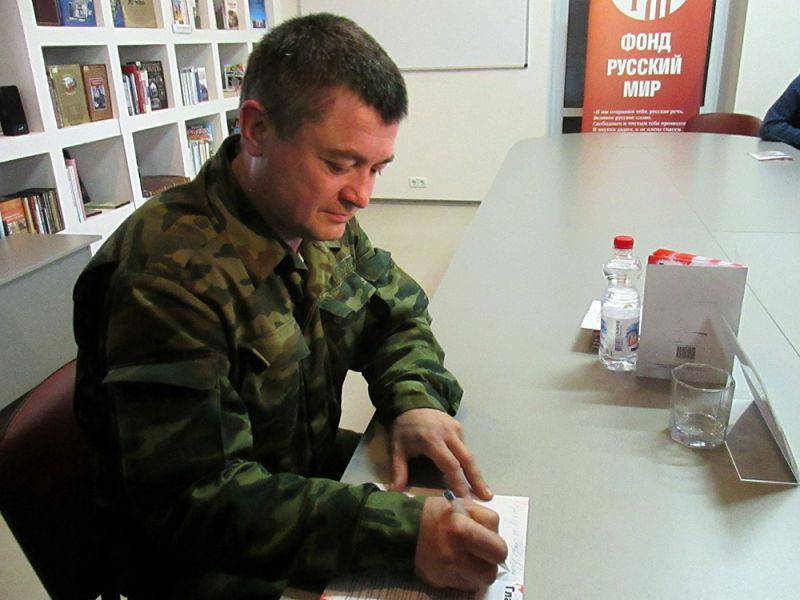 Speaking about the current situation in Odessa, Igor noted with optimism that on May 9, many people came out with Red flags and St. George ribbons. And when Poroshenko arrived, they chanted: “Fascism will not pass.” And 2 May, on the anniversary of those events, at least 45 thousands of people came to commemorate the fallen. This was shown by the counters on the established framework of metal detectors.

He expressed the hope that the murderers will be judged by the Nuremberg Tribunal, which will be included in history like the Odessa tribunal.

In Donetsk, they often recall Odessa. On the streets you can find inscriptions: "Do not forget, do not forgive Odessa." And from there, from the city by the Black Sea, it is often reported: despite the atrocities of the fascist authorities, the inscriptions “Donbass, we are with you!” Constantly appear.

They remembered about Odessa and at the rally near the Park Inn hotel, which took place on the same day as the presentation of the book Kulikovo Pole. After all, December 10 is Human Rights Day, which is celebrated since 1950. This date was established by the UN in honor of the anniversary of the Universal Declaration of Human Rights. The place where people came to declare their rights was not chosen by chance - after all, OSCE observers are based at this hotel.

They came to demand freedom for the activist of the Young Republic organization Dmitry Nazarov. He was abducted by the Ukrainian special services when he was forced to go over another front line to help his sick sister. Dmitry was involved in volunteering, helping children, war veterans, retirees. And ukrovlasti accuse him of "terrorism" ... 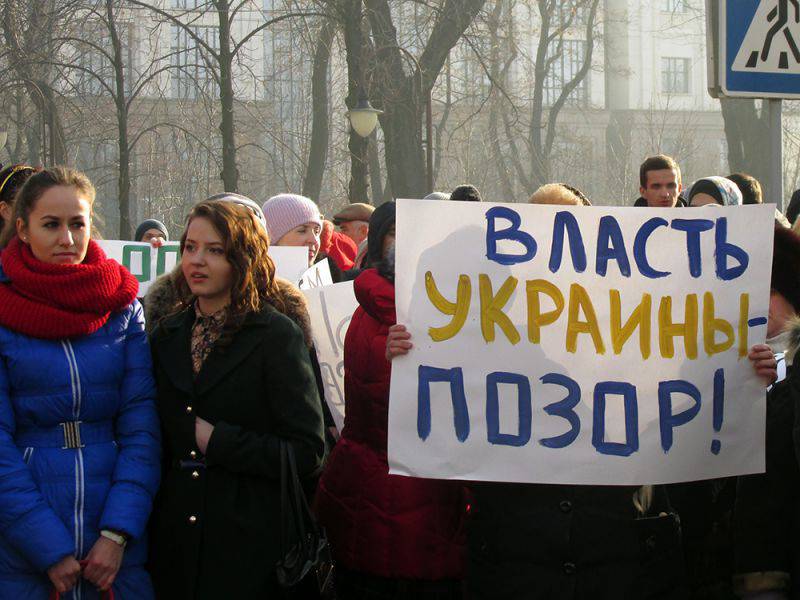 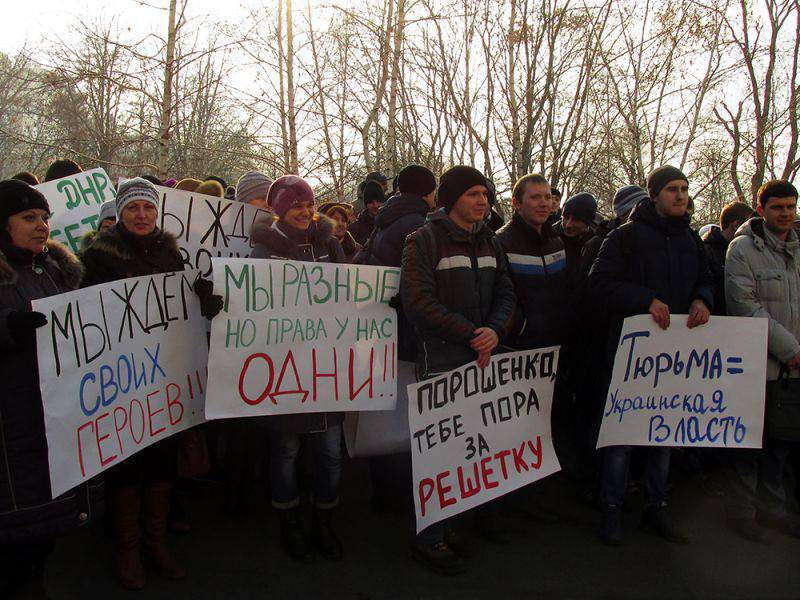 And a special cynicism is that, on the eve of the International Human Rights Day, the Ukrainian special services conducted a monstrous punitive operation in Krasnogorovka, arresting 85 people right away. Allegedly "prevented the attack." Although the most zealous supporters of the junta openly declare: the operation was carried out against the "cotton".

"Vata", "Colorado", "titushki" ... All these labels have been stuck for two years on those who refused to accept the fake values ​​of Maidan. He hung a label - and it is already possible to justify the burning of people, extrajudicial detention, and mass arrests.

So the OSCE preferred not to notice the massacre of the residents of Krasnogorovka ...

The atrocities continue ... In the Lugansk People's Republic, legendary commander Pavel Dremov, one of the most active fighters for Novorossia, was treacherously murdered. Whoever is a performer - the Ukrainian sabotage and reconnaissance group or a traitor in the environment - one thing is clear. This crime was organized by the same "directors", under whose leadership the mob raged on the Maidan, then they burned people in the House of Trade Unions and barbarously bombarded the cities of Donbass. And they continue to fire under the shameful silence of those who assumed the role of the world community. And for a long time, the cranes will spin and grieve for the fallen ...

Ctrl Enter
Noticed oshЫbku Highlight text and press. Ctrl + Enter
We are
Birthday of the young countryParticipants of the Odessa resistance: "We had to go to the new Kulikovo battle"
Military Reviewin Yandex News
Military Reviewin Google News
6 comments
Information
Dear reader, to leave comments on the publication, you must to register.