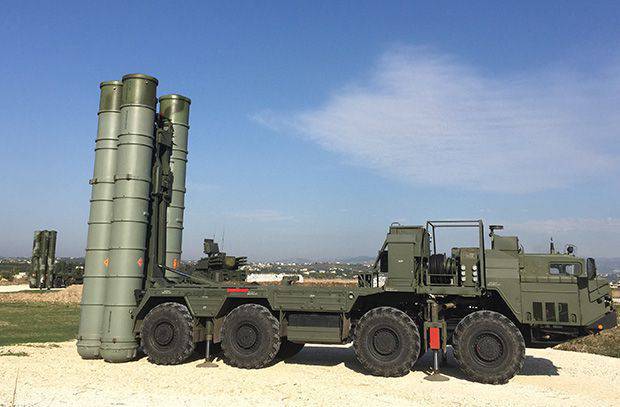 In the first decade of December, several C-400 Triumph anti-aircraft missile systems immediately took up combat duty. The Ministry of Defense reported the appearance of the newest air defense system on the Novaya Zemlya archipelago in the Yakut village of Tiksi and in the north-western regions of Russia. At the end of November, on the orders of President Vladimir Putin, the C-400 was transferred to Hmeymim airbase to cover our videoconferencing system.

In previous years, the Triumph divisions were located in the Moscow region (Elektrostal, Dmitrov, Zvenigorod, Kurilovo), in the Primorsky Territory (Nakhodka), the Murmansk and Leningrad Regions, Kaliningrad, Novorossiysk, Petropavlovsk-Kamchatsky and Vladivostok.

"Russian Planet" tried to figure out what is unique about Triumph. S-400 tests showed that the system can perfectly perform the functions of air defense and missile defense. Anti-aircraft missile system is able to close the sky from distant aircraft aviation B-52, B-1, F-111, F-15 and F-16, F-35 and F-22 fighters, E-3A and E-2C radar aircraft.

Founder of the Military Russia portal, military expert Dmitry Kornev, in a conversation with the observer of the Russian Planet, noted that the key characteristics of the anti-aircraft missile system are the detection range, the number of accompanied targets, the speed of work on the targets, the range and height of the defeat: “If you don’t go into details, then according to these characteristics, we are comparable with the Americans, but there are a number of points that make the C-400 cooler. "

“If you believe the C-400 transfer personnel to Syria, this is a very mobile system. "Triumph" is able to stand on combat duty just a few hours after the landing of transport aircraft. At Patriot, the deployment process takes longer, ”explained Kornev.

A military analyst, based on data from the US media, told the RP that the Russian military 18 November could conduct tests of ultra-long-range missiles, which may be able to shoot down satellites. Presumably, these missiles will be included in the arsenal of C-400.

According to Kornev, the vulnerability of the Patriot and Triumph is that they can only work on tactical missiles, that is, on medium and short-range missiles. The invulnerability of intercontinental missiles due to higher speed and more acute angle of entry into the atmosphere. The radar data of the air defense missile system is difficult to accompany such targets.

Said Aminov, the editor-in-chief of the Vestnik of Air Defense, continuing the topic of comparison of the Russian and American air defense missile systems, stressed that the latest version of the Patriot Pac-3 is, unlike the standard models, highly effective weapon. Destruction systems include four containers with ERINT reduced-caliber missiles, which are more effective due to the principle of heat to kill, that is, providing a direct hit.

The only indisputable plus of the Patriot is combat use. But the experience of the Iraqi campaign showed that the US air defense missile system was capable of working only on airplanes and was powerless even before the outdated Soviet Skat, which had an non-detachable warhead. The American designers made the appropriate conclusions, and in the future the system evolved precisely in the direction of tactical missile defense.

However, the ability to hit ballistic targets remains a weak point of the past baptism of the newest Pac III. Pentagon does not disclose the range of missiles. According to Aminov, presumably, it is no more than 20 km, while the C-400 - from 40 to 60 km.

The Triumph’s advantage over the Patriot is ensured by the mortar launch of rockets adopted in Russia, which allows firing at all radii. At the same time in the Patriot used launcher oblique type, which can fire only a certain sector.

“The American system does not rotate the target illumination locator. We have a circular review. Thus, threats are recorded from all sides. In addition, C-300 and C-400 have an ejection vertical launch, due to which the rocket leans in the direction that the locator points to, ”Aminov explained.

As the “Russian Planet” wrote, an even more advanced system, especially in the area of ​​anti-missile defense, is the Prometheus C-500 anti-aircraft missile systems. The system will be able to shoot down missiles not only of medium and short range, but also, which is very important, intercontinental ballistic missiles at the final stage of flight.

The Russian designers of the Almaz-Antey concern, taking as a basis the legendary C-300, were able to create defensive systems that, for a number of parameters, have no analogues in the world. The Syrian campaign once again demonstrates the invaluable ability to control your own sky and airspace hundreds of kilometers away.