A section on the results of work in the outgoing year is open on the website of the Ministry of Defense.

December 14 2015
15
The Ministry of Defense of the Russian Federation opened on its website a section dedicated to the results of work in 2015 g, reports RIA News post office. 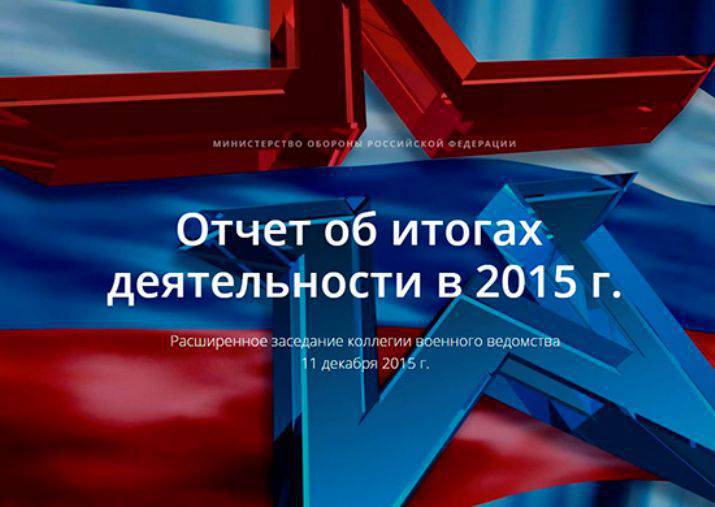 “The section was created in order to ensure public openness and the possibility of wide public discussion of measures taken by the leadership of the military department to implement the plan of activities of the Russian Defense Ministry,” the release said.

It is reported that "the report is designed as an interactive supplement to the annual activity plan of the Russian Defense Ministry to 2020 year electronic resource, and in an understandable form for a wide range of users, demonstrates the performance indicators achieved in 2015 in specific years and figures."

Reports on the open part of the said plan will be published annually.

“The annual report (...) is distinguished by the maximum possible openness of information on all the most important aspects and areas of life and development of the Armed Forces of Russia within the framework of the requirements of Russian legislation,” the report says.

Ctrl Enter
Noticed oshЫbku Highlight text and press. Ctrl + Enter
We are
The Ministry of Defense on its website has opened a section dedicated to the 85 anniversary of the Airborne Forces
Military Reviewin Yandex News
Military Reviewin Google News
15 comments
Information
Dear reader, to leave comments on the publication, you must sign in.