The project of the additional protection armor "Mantiya"

December 15 2015
23
In the context of the development of armored vehicles of particular importance is the issue of additional means of protection. The features of recent armed conflicts, such as fighting in cities and the wide distribution of light anti-tank weapons, do not allow one to rely only on armor of combat vehicles. To enhance crew safety, various systems of dynamic and active protection are offered. In addition, multifunctional systems are being developed that allow not only to protect armored vehicles from attack, but also to reduce the likelihood of their detection. It was for this purpose that the Mantiya system was developed.


The project of a promising protection system for armored vehicles was developed by the Steel Research Institute (Moscow), which is part of the Tractor Plants concern. It is reported that the establishment of its specialists engaged in the institute M.O. Alekseev, A.M. Kimaev, M.V. Khokhlov and D.G. Kupryunin. As a basis for the project, the existing system of a similar purpose was taken, which was supplemented with a set of new elements. The result was a complex "Mantiya", which is a means of protecting equipment and weapons from detection and attacks using anti-tank grenade launchers or other similar weapons. 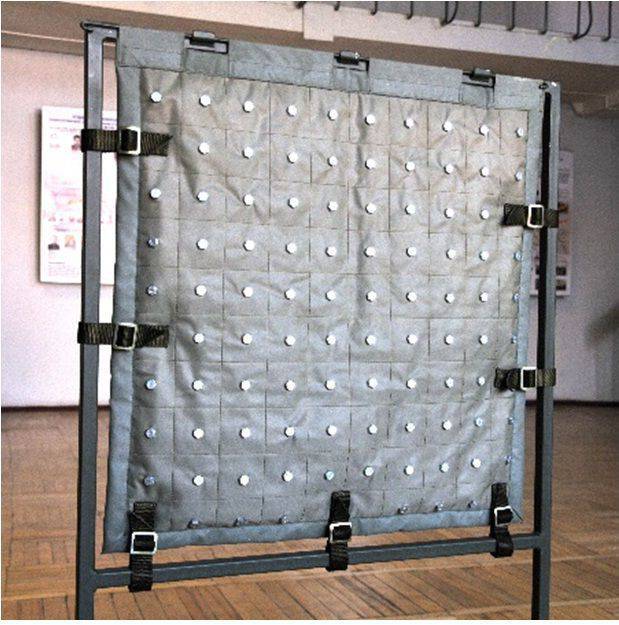 General view of the sheet of the system "Mantle"

As a basis for the “Mantle”, the “Cape” armament protection kit, already well known to specialists and the public, was taken. The kit consists of a set of sheets of special heat-insulating and radio-absorbing synthetic material. Cut sheets of appropriate patterns are invited to cover the protected equipment. This dramatically reduces the visibility of armored vehicles for infrared and radar detection systems. As a result, the probability of detection and destruction using modern guided weapons is reduced.

The new project "Mantle", as follows from the available data, means equipping the "Cover" with a set of new elements. After such a revision, the finished system allows you to mask the protected equipment, as well as reduce the likelihood of its destruction by anti-tank weapons.

According to the Institute of Steel, the proposed system of additional protection has a fairly simple structure. To protect against anti-tank grenades, it is planned to use a basic screen, borrowed from the “Cape” project, which should be equipped with a so-called. discrete volume protective elements. Due to this, it is claimed that integration of the lattice screen technology into the “Cape” set is achieved, which makes it possible to effectively protect equipment from anti-tank grenade launchers. 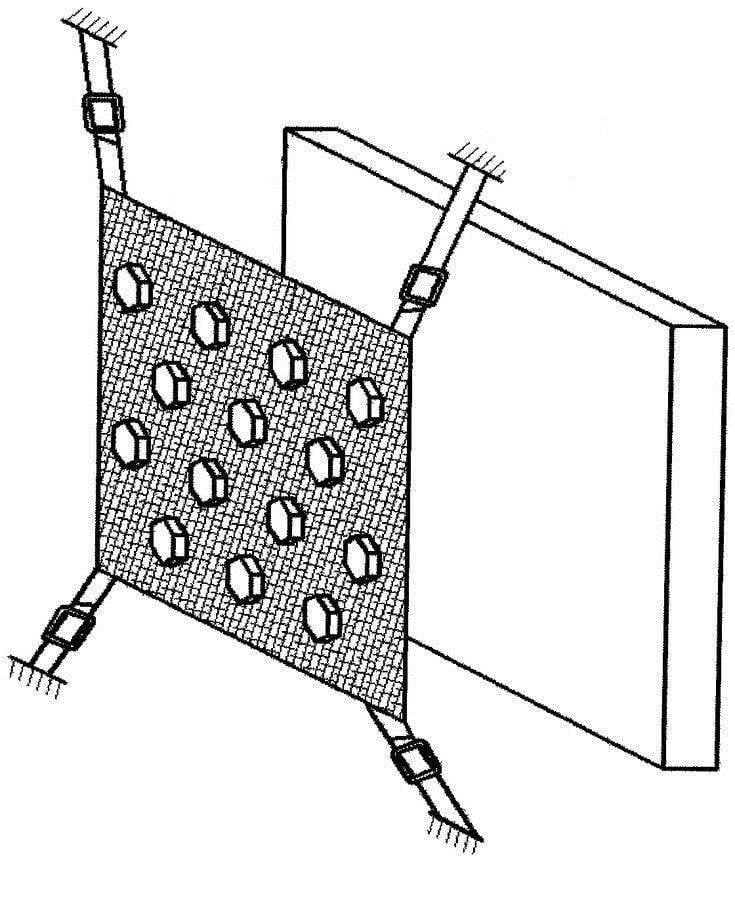 Diagram of the installation of the "Mantiya" screen

The published photograph of the “Mantiya” system depicts a sheet of the proposed basic radio-absorbing and heat-insulating material stitched to form a checkered quilted structure. In the centers of the resulting "cells" are discrete protective elements. Each such element is a small hexagonal prism that looks like the head of a conventional bolt. Due to the correct location, shape and size of such elements should lead to the destruction of enemy ammunition and thus save the protected equipment from destruction.

Sheets of the “Mantle” system are proposed to be used as additional screens installed at some distance from the armor of the base machine. According to the developer, the distance between the armor and the sheet can vary from 50 to 1500 mm. This provides protection against anti-tank ammunition, as well as partial protection against detection by available surveillance equipment.

The principle of operation of the system "Mantle" is as follows. When a new anti-tank grenade hits the screen, such as PG-7В or similar, it mines or breaks through the soft base, which prevents the fuse from operating. In addition, when it hits the screen, the grenade interacts with one or more metal elements. The distance between the latter is calculated taking into account the dimensions of the existing anti-tank ammunition. In other words, the grenade in any case will encounter one or more protective elements. 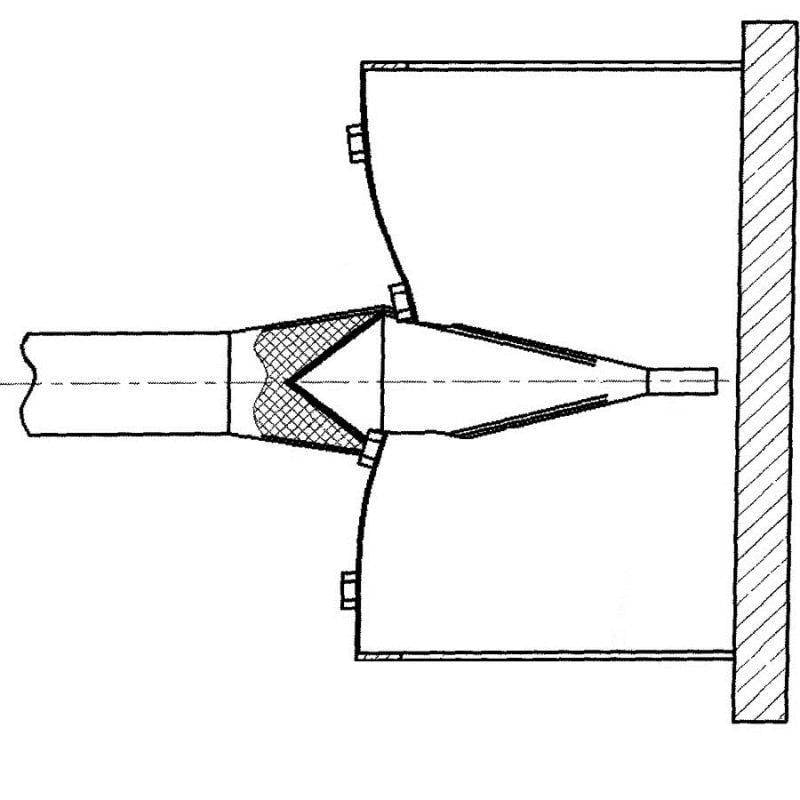 Interaction scheme of grenades and screen

The interaction with the protective element leads to deformation of the grenade body, as well as damage to the cumulative funnel and other parts of the ammunition. As a result of such an impact, a regular undermining of a grenade is rendered impossible, or the correct formation of a cumulative jet, the power of which does not allow to cause appreciable damage to the armored vehicle, does not occur. It is argued that in terms of the effectiveness of protection against cumulative grenades, the proposed system "Mantle" hardly differs from traditional lattice screens. This parameter is at the level of 0,5-0,6, i.e. "The mantle" can stop or neutralize up to 50-60% grenades.

The Steel Research Institute published a photograph of an anti-tank grenade used during the tests. As expected, in a collision with a relatively soft screen, equipped with rigid discrete elements, the body of the ammunition deformed and made it impossible for the triggering of the fuse to occur, followed by the defeat of the conventional target. From the body of the PG-7В grenade, formed by two cones, there remains a crumpled piece of metal in which it is impossible to recognize the existing weapon.

The promising system "Mantle" has several characteristic advantages. The first is the ability to protect the basic technique from detection inherited from the base “Capes”. Due to the correct installation with a minimum amount of gaps, it is able to protect the equipment from infrared and radar detection systems. At the same time, the probability of detecting and capturing an infrared homing head is reduced by a factor of 2-3. The probability of detecting a radar seeker drops at least six times. 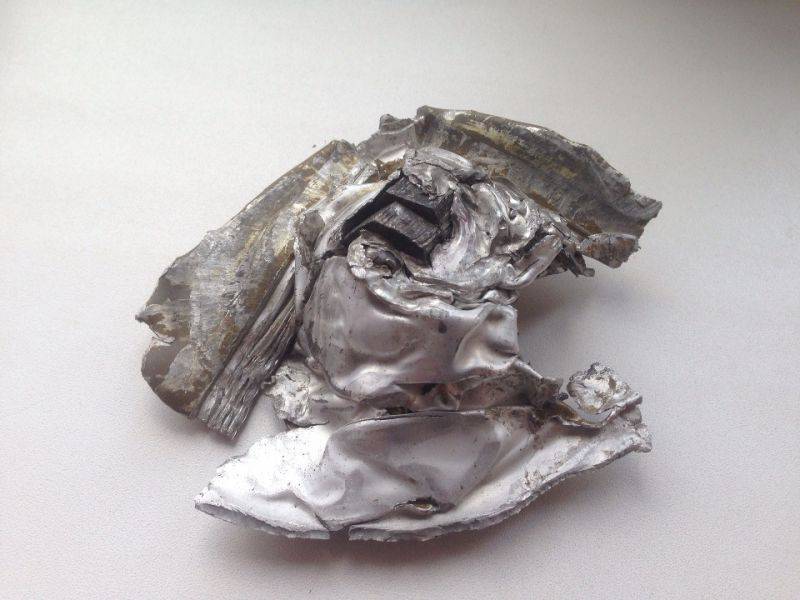 The remains of PG-7В grenade, stopped by the "Mantle" screen

The mantle's masking capabilities make it possible to reduce the likelihood of finding an armored vehicle, as well as increase its survivability on the battlefield in the event that the enemy uses guided weapons. In the case of the use of light anti-tank weapons, "Mantle" has discrete protective elements designed to destroy or damage flying grenades. Thus, it is possible not only to disguise the armored vehicle, but also to protect it from shelling.

A new development of the Steel Research Institute is proposed, first of all, to equip promising armored fighting vehicles of various classes. However, the possibility of using the "Mantle" to enhance the protection of existing armored vehicles, such as Tanks, infantry fighting vehicles, armored personnel carriers, etc. This application is facilitated by the relative ease of installation and dismantling of a set of additional screens. Such procedures can be carried out even in the field and without the involvement of specialists or special equipment.

As follows from the available data, the system "Mantiya" has already passed tests and was tested by shelling from existing anti-tank weapons. The outlook for the new development is not yet clear. Such equipment is of particular interest and can find its place in the range of additional equipment for existing and prospective armored vehicles. However, so far the military department has not commented on the new project of the Steel Research Institute. Perhaps the system "Mantle" in the future will pass military tests and will be adopted for use, but so far there is no information about this.

Ctrl Enter
Noticed oshЫbku Highlight text and press. Ctrl + Enter
We are
Poroshenko promised to provide the plant to them. Malysheva orders for armored vehiclesKurganets-25, BMD-4M, BTR-MDM: Tractor Plants are ahead of the curve
Military Reviewin Yandex News
Military Reviewin Google News
23 comments
Information
Dear reader, to leave comments on the publication, you must sign in.