Syrian army took control of a military airfield near Damascus

December 14 2015
59
RIA News Citing a representative of the Syrian militia, reports that the Syrian government army has taken control of a strategically important object. This is a military airfield Marj al-Sultan, located about 18 kilometers east of Damascus - in the suburbs of Duma. It should be noted that for several years this military object was under the complete control of the militants and was one of the key objects of the Jaish al-Islam group.

Meanwhile, there are reports of successes of the Syrian army and the militia in the provinces of Hama and Aleppo. Thus, as a result of a special military operation that engulfed several areas of the province of Hama, it was possible to destroy more than a hundred militants of terrorist groups. The positions of terrorists near the settlements of Al-Beida, Al-Masasna, Zlin, Al-Mahruk and Az-Zalakiyat are defeated. It is reported by the news agency SANA. 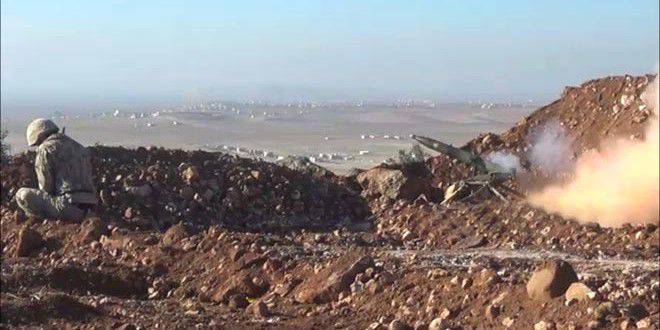 The Syrian military managed to take control of one of the neighborhoods in the largest Syrian city of Aleppo. We are talking about the quarter of Al-Lermon, in which the militants DAISH and their military equipment were destroyed.