December 14 2015
69
The press service of Chernomorneftegaz reports that the vessel under the Turkish flag tried to prevent the B-312 and B-319 drilling rigs from moving into Russian territorial waters. The company reports that the Turkish ship approached an unsafe distance from a sea caravan that transported drilling rigs to the shores of the Crimean peninsula. From the message:

When relocating the SPSU B-312, an unidentified Turkish-flagged merchant ship appeared along the line of the convoy of ships with the object being towed. Acting in violation of international rules for preventing collisions at sea and generally accepted maritime standards, the Turkish vessel did not give way to a cross-course caravan and attempted to stop on its way, which obviously created an emergency situation. The captain of a Turkish vessel did not enter the radio exchange with escort vessels without responding to calls. 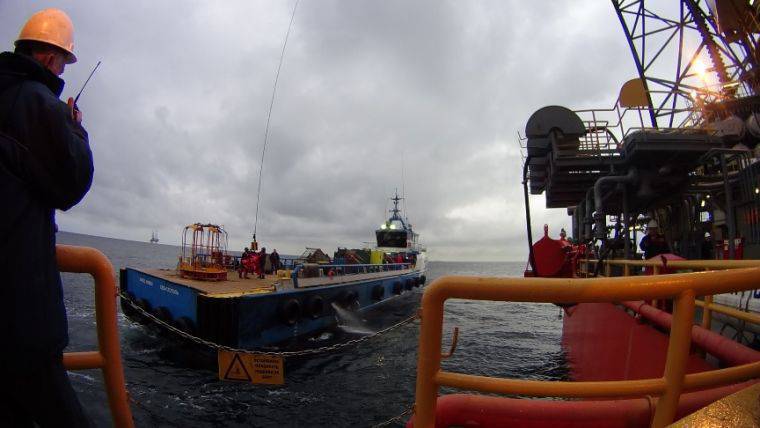 It is further reported that the patrol boat of the Border Service of the Federal Security Service of Russia and the missile boat of the Black Sea Fleet of the Russian Federation have eliminated the “misunderstanding”.

Of messages:
Eliminated the “misunderstanding" patrol boat of the Border Service of the FSB of Russia and the missile boat of the Black Sea Fleetwhich forced the vessel flying the flag of the Republic of Turkey to change course in a direction safe for the transport caravan. SPBU V-312 was safely, despite a strong storm, delivered to its destination and installed on poles.

The relocation of the second drilling rig - SPSU B-319 also took place in difficult weather conditions and, in addition, was accompanied by a number of technical difficulties, which were solved thanks to the professional work of the personnel of the State Unitary Enterprise RK Chernomorneftegaz.

It is reported that the transportation of drilling rigs was carried out "in connection with the difficult international situation." They were transported from the so-called Odessa gas field (Crimean shelf) to the territorial waters of the Russian Federation by order of the Head of the Republic of Crimea Sergey Aksyonov.

According to some reports, the installation, the total cost of which is an astronomical sum of more than 25 billion rubles, could become the targets of an attack from the Ukrainian radicals, who repeatedly threatened to counteract Russia's economic activity in the Black Sea. Apparently, the Turkish ship decided to play along with scumbags from the Majlis, but in time, as the diplomats say, received a “clear signal”.

Press service of "Chernomorneftegaz":
Currently, both drilling rigs are located in the territorial waters of the Russian Federation, their safety is ensured.

A few hours later, the FSB Media Relations Directorate refuted the information that the FSB boat needed to take measures so that the Turkish vessel would change its route. The FSB said that the ship under the Turkish flag did not try to prevent the transportation of drilling rigs:

After contacting the Turkish ship, on the recommendation of the Black Sea Fleet ship and in order to ensure the safety of navigation, it changed its course and safely dispersed from the caravan. The divergence distance was more than 2 nautical miles. Attempts to stop and in any way interfere with the towing of the rig Turkish ship did not take
.