A crack in the coalition?

December 15 2015
138
According to Bloomberg, Iran is starting to withdraw its units participating in the coalition of forces led by Russia and leading a military campaign in Syria. The Islamic Revolutionary Guard Corps is retreating from Syria. It seems that the Russians are losing their “important ally”; a coalition was formed in the coalition. 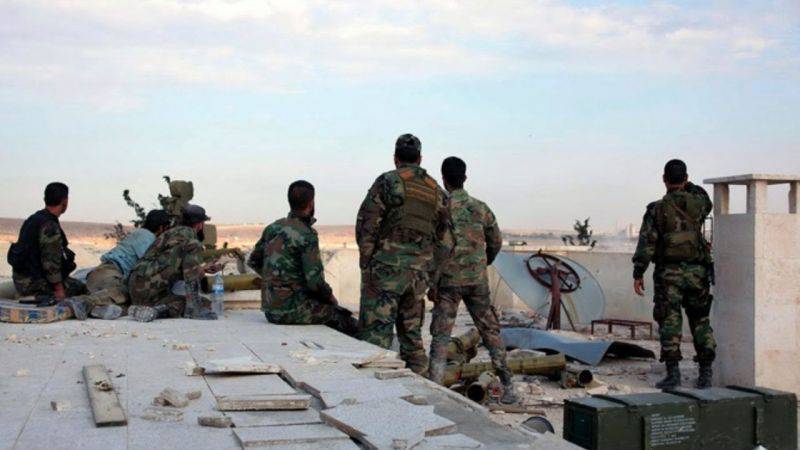 Eli Lake in an article for Bloomberg View cites the opinions of a number of American and other Western military officials. Experts believe that the military coalition in Syria, led by Russia, "cracked". Earlier, President Obama, recalls the publication, ridiculed the campaign launched by the "coalition of two."

US officials told the correspondent that, according to their observations, in recent weeks a significant number of soldiers of the Islamic Revolutionary Guard Corps have been retreating from the Syrian military zone. The retreat began after some senior officers were injured and killed, leading a campaign in Idlib province and other areas. As a result, the attack launched in September on the initiative of the Russians “seems to be losing an important ally”.

On Friday at a conference at the Brookings Institute, Israel’s Defense Minister Moshe Ya'alon said that, according to Russia's original plan, Idlib was supposed to be taken over by other cities that were under the control of “rebels”. However, the Russians will not be able to take the city "due to military difficulties." Campaigns face "failure." As arguments, the Israeli Defense Minister called the “incompetence” of the Syrian army and the “absence of the Islamic Revolutionary Guard Corps”.

This is an amazing turn of events, says Eli Lake. The Western media reported this fall that Kasem Suleymani, the leader of the elite Iranian units of Quds, and representatives of the Russian Defense Ministry held talks. The rapprochement of the two states was to turn the tide of the Syrian war and prevent the fall of Bashar al-Assad.

In October, the Wall Street Journal, 2015, provided expert assessments that more than 7000 Iranian revolutionary guards and volunteers who joined the ranks of other paramilitary units helped the Syrian regime in the war. At the end of October, General Joseph Dunford, the chairman of the Joint Chiefs of Staff of the United States Army, pointed out that the 2000 Iranian soldiers in Syria are fighting to "save Assad."

And what about today? Now this number, according to American and other Western officials, has been greatly reduced. An official working in the “Western defense” field (the name is not given) told a reporter that now only 700 Iranian fighters from the Revolutionary Guard Corps are currently participating in an operation under the command in Russia. (The estimate does not include Iranian military advisers who have cooperated with the Syrian armed forces since 2012.)

One of the reasons why Iran is currently quitting a game in Syria, according to US officials, is that many officers were killed or injured in the fall in heavy fighting. The US intelligence community is still trying to get evidence of Suleimani’s injury (he was reportedly injured at the end of November in Aleppo, Syria’s largest city).

Robert Ford, the former US ambassador to Syria in 2011-2014, told the newspaper that the Corps fighters are in the thick of the war. “They lose their lieutenants,” he said. “When you lose lieutenants, it means that you lose people fighting on the front lines.”

And the official press of Iran has already begun to recognize some of these losses.

Ford says that the brutal battles involving Iranian military forces are a sign that the support of the Syrian opposition by the West and the Arab monarchies may have "significant influence" on the course of the war.

A question for US politicians: what will the withdrawal of Iranian forces lead to for the campaign led by Russia? Both countries, both Russia and Iran, agree that President Assad should remain in power for the foreseeable future. Russian President Vladimir Putin has even “pondered this week about the use of nuclear weapons against the "Islamic state", the newspaper notes.

Meanwhile, according to some press reports, Russia plans to open a second air base near Homs (in central Syria) in addition to the base in Latakia, on the Mediterranean coast. Experts suggest that Moscow has decided to strengthen the air war. In recent days, US officials have said that they are seeing an increase in the activity of the Russian air campaign in Aleppo.

On the other hand, other politicians in the United States emphasize that the Kremlin is not able to continue the air campaign for an "indefinite period." Deputy Secretary of State Anthony Blinken highlighted this view last week in a forum organized by Foreign Policy magazine. According to him, while the “military intervention of Russia” in Syria strengthened the leverage of Assad, it also “increased the leverage of the conflict with Russia.” Mr. Blinken is confident that Moscow cannot afford to do what it does in Syria for a long time. ”

The protracted conflict has a negative effect on Iran, the journalist said. If it comes to the long term, the cost of maintaining the Al-Assad government will be exorbitant for them. For the West, this is a positive outcome. So says the aforementioned Ford, currently an expert at the Institute of the Middle East. “If they feel,” he said, “that the costs of a war can be stable for several months (but hardly for years), they can afford to pay this price. They appreciate the support of the Assad government, which they are doing now. ”

Since 2011, when the Syrian people launched an uprising against Assad, the journalist continues, Iran and Russia were willing to pay an “increased price” for supporting Assad. And yet, even with the Russian air campaign and the infusion of Iranian fighters into it, Assad is not able to recapture the entire country. And the Obama administration hopes that the withdrawal of the Iranian forces is now a sign that at least one of Assad’s allies may decide to reduce its participation in the campaign.

Reports of the withdrawal of Iranian forces from Syria and the death of Iranian military leaders are confirmed by many major sources, including Russian.

How 13 passed December RIA News", the brigadier general of the Islamic Revolutionary Guards of Iran died during a battle with militants in Syria. This was reported by the Iranian news agency "Fars".

“General Hossein Fadi was killed in a battle with the terrorists of the Islamic State grouping,” it said.

Fadai served as a military adviser to the Syrian army.

RIA "News"Recalls that at the end of October 2015 in Syria, the brigade general of the IRGC Reza Khavari and eight Iranian soldiers were killed.

"Vedomosti" write that Russia replaces Iran as a support for the Syrian authorities. This may lead to a further complication of Russia's relations with other countries that are at war with IG.

According to Bloomberg, Iran is withdrawing a significant portion of its military from Syria; the country will remain from 700 to 1000 soldiers and officers of the Islamic Revolutionary Guard Corps. The number of advisors will also be reduced. The partial withdrawal of Iranians from Syria means that Tehran admits the failures of the last operations, the newspaper notes.

In order to prevent the deterioration of the front-line situation, Moscow will have to supply the Syrian army more weapons and go on strengthening the air group. According to Leonid Isayev from HSE, Russia in support of Assad is gradually replacing Iran. And it is beneficial to Iran, which is out of the sanctions, but unprofitable for Russia.

"Recently, about seven high-ranking general officers of the IRGC died in Syria," said "Moskovsky Komsomol" Senior Researcher, Institute of Oriental Studies, RAS, Professor Vladimir Sazhin. - This is a big loss. Of course, it alarmed the Iranians. But I do not think that this is the main reason for the alleged withdrawal of troops. There may be much deeper reasons. It is very difficult for Iran to conduct large-scale military operations in Syria, because it does not border this country. There is a question about the need to transfer troops. These are complex operations from the point of view of rear support of military operations. ”

According to the expert, we are hardly talking about the withdrawal of troops: “I don’t think they will withdraw troops. Maybe there is some sort of redeployment. Special units of the IRGC are changing to ground forces. A month and a half ago, there were reports that Iran plans to increase the number of its troops in Syria to 6-7 thousand. ”

The truth in this matter, we add, is rather difficult to learn. She knows only the soldiers fighting on the ground. Iran has long been considered one of the main allies of the Syrian President Assad, but in Tehran itself, participation in the Syrian campaign is constantly denied. “Legally” is assisted by Assad in his war with “opposition” groups and the army of the “Islamic State” Shiite militia, Kurdish troops and Russia with their air attacks. In addition, it is believed that a coalition of states led by the United States is fighting against the "IS" in Syria.

Observed and commented on Oleg Chuvakin
- especially for topwar.ru
Ctrl Enter
Noticed oshЫbku Highlight text and press. Ctrl + Enter
We are
Results of the week. “Everything will go like clockwork: at first — in the evenings — singing, then pipes will burst in the toilets ...”Iran in the Syrian conflict. The confrontation with Saudi Arabia and the interests of the Shiites
Military Reviewin Yandex News
Military Reviewin Google News
138 comments
Information
Dear reader, to leave comments on the publication, you must to register.