Project "ZZ". The West is a war maker

December 14 2015
72
Some foreign analysts believe that the chances of detente and a thaw in relations between Moscow and Washington are lost. Putin is strengthening land, sea and airborne nuclear forces. In a likely confrontation with the US, the Russians do not want to look weak. Other experts believe that Washington, driving Russians “into a corner”, risks provoking a world war. Third Western policymakers are trying to convince Brussels and Washington that the main threat to the West is not Russia at all, but Saudi Arabia and Qatar. 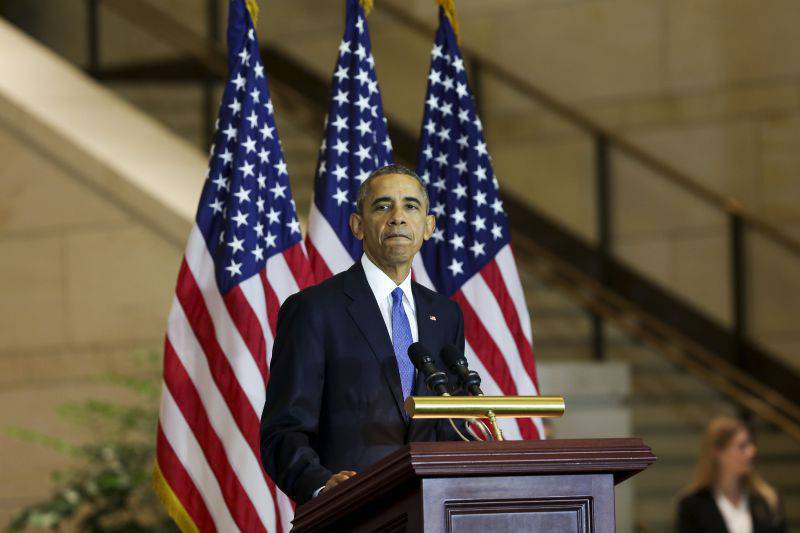 As noted in the editorial edition Investor's Business DailyVladimir Putin gave Russian military orders to strengthen the Russian nuclear forces on land, sea and air. This is being done in order to confront the “confrontational” mood of the United States. Similarly, it was “in the old bad times” when the Soviet Union existed, and the Russians did not want to look “weak” in confrontation.

Speaking last Friday at the Ministry of Defense of the Russian Federation, “Russian ruler Vladimir Putin ordered the need to introduce new weapons for“ all parts ”of the Moscow nuclear triad: bombers, submarines and ground-based intercontinental ballistic missiles. According to the agency "Bloomberg", the Russian president also ordered to increase the effectiveness of early warning systems for rocket attack.

According to IBD, such statements in the 21st century are "equivalent to the rhetoric of the Soviet Union parades on 9 on May and on the day of the October revolution, when nuclear missiles were rolling past the Kremlin so that the entire planet could learn who is the biggest hooligan here."

Russian Defense Minister Sergei Shoigu boasted of the fact that next year “five new nuclear regiments” will appear. According to him, more than 95% of Russia's nuclear forces are in a constant state of alert. The Russian Navy received two new submarines equipped with sea-based nuclear missiles, two new non-nuclear submarines and eight new warships. He also said that about 56% of Moscow’s nuclear weapons are new.

And what about America? In the Los Angeles Times, 13 was told months ago that the nuclear arsenal is aging in the USA, and the gap with other nuclear powers has already been fixed. Bombers capable of carrying nuclear bombs, submarines, intercontinental ballistic missiles and their bunkers are already allowed to be shown in “virtual museums of the Cold War”. All nuclear delivery systems weapons The United States is approaching the moment of complete obsolescence. Relevant US Air Force bombers "go back to the Kennedy administration." The naval armada of submarine missile carriers is nearing the end of the design life. Their warheads on average almost three decades, the newspaper notes.

All of this, according to the chairman of the Joint Chiefs of Staff, General of the Marine Corps, Joseph Dunford, "can pose a significant threat to the United States."

The behavior of Moscow General “alarming”.

And this contrasts strongly with the hope that arose after the fall of the Berlin Wall and the collapse of the “Soviet communist empire,” says the IBD editorial board. “Russian leader Boris Yeltsin,” the newspaper notes, “destroyed nuclear weapons, impatiently signed disarmament pacts ...” Now everything is the other way around, and Washington has to think about “missile defense against Russia.”

Alistair Kruk, an English diplomat who at one time held high positions in British intelligence and EU structures, and now heads the Conflicts Forum, on the website consortiumnews.com writes that by driving Russia “into a corner”, the West risks provoking a third world war.

“Everyone knows the interpretation of events, which the West now adheres to. Here is an interpretation in the style of the Cold War: America is fighting against the “evil empire”. As Professor Ira Chernas wrote, since we are “people, and they (the Soviet Union, but now“ IG ”) are not, then we must adhere to polar views on all issues.”

The professor believes that if these “they” are interpreted as “absolute evil,” then the West must be “the absolute opposite.” It seems like the "people of God" stood up against the "people of Satan." This biblical interpretation of the geopolitical "plot" and is the cornerstone of the claims of the US and the EU to the "enemies", at the same time giving the opportunity to declare their rights to "exclusivity" and global "leadership".

The danger of this approach is the complete absence of self-criticism: if a certain “enemy” is “the opposite”, then the one who fights with the enemy is free “from any responsibility”, even from the one according to which the enemy suddenly appeared. The United States could not contribute to the emergence of such an enemy, because "the people of God" cannot be guilty of anything.

It is sensible to perceive the reality of the Americans (more precisely, their rulers) by the interpretation of the policy of the times of the Cold War, especially the era of Ronald Reagan. In those years, it was believed that the United States defeated the "Soviet empire", in no way yielding to the "enemy."

Later, during the time of the undivided rule of the neocons of George W. Bush, the “plot” was adapted for the war in the Middle East. Socialist-minded Arab secularists and Baathists began to be considered supporters of Satan. It is not without reason that historian Stephen Cohen, a specialist in Russia, says that such an interpretation prevented the United States from developing the ability to look for a mutually acceptable modus vivendi in relations with Russia. But she needs it! If the White House is really going to overcome Wahhabi jihadism, then this should be done in partnership with the Russians.

Moreover, the interpretation of the "plot" in the style of the Cold War "erases" the true history. Because of this, Washington in general cannot understand Putin who is “demonized”. At the same time, Syrian President Bashar Assad is "demonized". All of this is being done in Washington because Western rulers are used to "ignoring the actual story." The West also ignores its role in history.

The same Cohen rightly points out that the new cold war "has every chance of becoming much more dangerous than the past forty-year cold war." If in Soviet times (after the Caribbean crisis) Washington and Moscow developed the rules of "behavior", now there are no "red lines". And it is not said Russian. Putin and Medvedev repeated the White House more than once: “You cross our red lines!” And what’s the answer? The White House declared: “You have no red lines. But we have red lines, and we can build as many military bases near your borders as we wish ... ”

Thus, the mutually acceptable norms of "behavior" of Washington and Moscow no longer exist.

In addition, there is not a single political movement in the United States that would oppose the new Cold War and defend detente.

President Obama is not an aggressive neocon at all. And yet, this ruler is bound by the old legacy of the world hegemon. He has to play a certain role - otherwise the president will be called the direct cause of the “decline of America.” As Stephen Cohen says, “unfortunately, current reports convince us that the White House and the State Department first of all think how to resist Russia's actions in Syria.” In Europe, Washington also does everything so that Russia cannot strengthen its position there.

Such a game can create a "fire" of great power. And lead to "disaster."

Moscow’s appeals to the West for cooperation in the fight against IG, a reserved reaction to the provocation with Su-24 in Syria, Putin’s balanced rhetoric are used by Washington and London only to create an image of a Russian paper tiger, a weakling who has nothing to fear.

What is the result? According to Aleister Crook, there are only a couple of options in front of Moscow. According to one, Putin must yield to the "hegemon." According to the second, the Russians will have to “prepare for war”.

In a British newspaper «The Independent» An article by David Connett was published in which Ken Livingstone, a political figure, the mayor of London in 2000-2008, a representative of the left wing of the Labor Party (nicknamed Red Ken), is quoted.

At a conference in Moscow, "organized by the pro-Kremlin television station Russia Today, the journalist writes, Ken Livingston said that Britain and the West are threatened not so much by Russia as by Saudi Arabia with its fundamentalism.

“The simple fact! Said Red Ken. - The West is not threatened by Russia at all. We are currently facing the threat of Muslim fundamentalism, most of which is funded by Saudi Arabia. At the same time, she is our main ally ... "

According to Red Ken, Russia is exposed in the West in a negative light in the press, and President Vladimir Putin is “demonized” altogether. But in the same Britain, no one, for example, "does not talk about discrimination against the Russian-speaking population in the Baltic countries." No one writes that the EU actually once pressed the Ukrainian President Yanukovych over the signing of a trade agreement, and when the president decided that he would not sign it, "oddly enough, he was overthrown."

During the discussion, Mr. Livingston also noted that there is no “right” struggle to fight against Islamic terrorism. So far, Muslim fundamentalism has been freely financed by Saudi Arabia and Qatar. Wahhabi hatred is spreading everywhere. And neither Britain nor the United States do anything to stop it. Qatar and the Saudis are still allies of the West.

Only by the end of 2015 did it come to Washington that it should cooperate with Iran and Russia in the fight against Muslim terrorism, Livingston said. According to him, it’s time to "create a broad coalition."

Experts, whose opinions are given in the material, have no doubt that the West, albeit indirectly, is responsible for the escalation of tensions and the shift of the crisis situation to a total world war. The West, according to the old habit, who considers himself "the power of God" and "a supporter of good," is guilty of the crisis in the Middle East and the chaos in Ukraine. It is the West, led by the American White House, that still adheres to the doctrine of the Cold War, insists on “hegemony”, destroys relations with Moscow and leads the planet to catastrophe. Whatever the dove of the world B. B. Obama seemed to someone, in fact he is a hawk, whose role is to push the eastern and western world together.

Perhaps, dealers from the American military industry expect to remove fat cream in the new global war? Come to your senses!

Ctrl Enter
Noticed oshЫbku Highlight text and press. Ctrl + Enter
We are
Situational analysis of the death of the MH17 flight (Malaysian Boeing 777), made on the basis of engineering analysis from 15.08.2014Geopolitical mosaic: Qatar is ready to give billions of dollars for the restoration of Syria, and Saudi Arabia will buy nuclear weapons from Pakistan
Military Reviewin Yandex News
Military Reviewin Google News
72 comments
Information
Dear reader, to leave comments on the publication, you must to register.