December 14 2015
129
In the Western media, the incident that happened on the eve between the Russian and Turkish ships in the Aegean Sea is being vigorously debated. Recall that the Russian “Sharp-witted” patrol ship, anchored in the Aegean Sea, was flown by a Turkish seiner, without reacting to any signals and warnings about a possible collision. When there was no more than 600 meters left between the Turkish ship and the Russian guard, the commander of the Sharp-witted decided to open a warning fire. 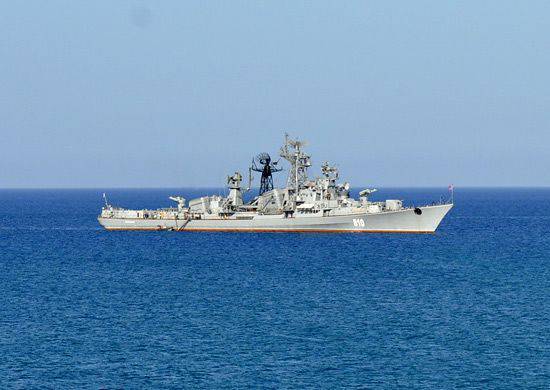 From the message Ministry of Defense of the Russian Federation:
In 9.03 Moscow time, the ship’s watch-keeping service discovered a Turkish vessel at a distance of about 1 thousand meters, approaching the “Sharp-witted” patrol ship anchored from the starboard. Despite numerous attempts by “Sharp-witted”, the crew of the Turkish seiner did not make radio contact with Russian sailors and did not respond to special visual signals of the light semaphore and signal rockets.

In connection with the incident, the Ministry of Defense of the Russian Federation called in the military attache of the Turkish Embassy in Russia. The Turkish military attache was given information about the possible consequences of such provocations.

At the same time, the captain of the Turkish seiner stated that he “did not know” about the state ownership of the warship. According to him, he "thought it was a NATO ship." As if the Turkish fishing vessels are going full speed every day to NATO ships, not responding to the warnings ...

Remarks in the comments of readers of Western media that Turkey is playing “Russian roulette” with Russia. One of the users of the FOX channel (information RIA News) suggested that the Turkish seiner could end up being a ship with weapons on board, which was planned to be used for a provocative attack on a Russian patrol ship.

Ctrl Enter
Noticed oshЫbku Highlight text and press. Ctrl + Enter
We are
The ship "smart" opened fire at a dangerous approach of a Turkish shipThe action “Military service under the contract is your choice!” In Rostov-on-Don: future contract servicemen, exhibitions and “Russian Knights”
129 comments
Information
Dear reader, to leave comments on the publication, you must to register.