December 15 2015
14
Nowadays, Austrian Glock pistols can already be safely attributed to the legendary firearms models. weapons. But by virtue of the current weapons laws of some countries, including the Russian Federation, these pistols are not available to civilian users. Traumatic and signal replicas of this weapon are ready to help. In Russia, similar products are offered to consumers by RossImportOruzhie, these are the Phantom-T (traumatic) and Phantom models of the 5,6 / 16 caliber (signal), for the acquisition of which a license is not required.


RossImportOruzhie Company is gradually expanding its range of signal weapon models, opening up a completely new segment for Russian consumers - signal pistols and revolvers, which are made identical to the popular models of foreign short-barreled weapons. In September, the company introduced the signal revolver TAURUS-S. 5 cartridges for this revolver were combined into a star sprocket and charged into the drum at the same time. To preserve the authenticity of this model, for the signal version of the revolver special cartridges were created that simulate the bottom part of the pistol cartridge. In each cartridge were installed capsules type Zhevelo. Using this capsule in conjunction with cartridges allows you to buy such a signal weapon without a license, since the caliber of the weapon is smaller than 6 mm.

According to Article 3 of the Federal Law of the Russian Federation “On Arms”, one of the types of civilian weapons in our country is a signal weapon. Based on the name, this weapon is designed to give signals - light (flare or fireworks) or sound (sound of a shot). The most popular on the market uses a signal weapon in the form of short-barreled - revolvers and pistols. In many ways, such models are similar to their combat counterparts, and the main distinguishing features of the signal weapons are the material of manufacture (usually a zinc alloy) and the possibility of a shot only a noise (idle) cartridge. At the same time, just like combat revolvers and pistols, such a weapon has its own caliber. In accordance with Russian laws, signal guns up to 6 mm are acquired by Russian citizens without a license. Therefore, becoming the owner of such weapons is quite simple, the only restriction is that the buyer must be older than 18 years. 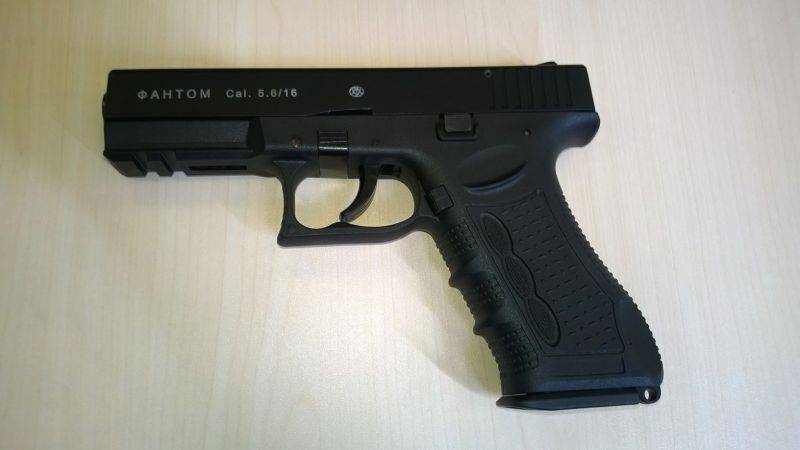 The second novelty of the company, which will be discussed, was the flare gun 5,6 / 16, which looks very similar to the Austrian Glock-19 pistol and was created on the basis of the traumatic analogue "Fantom-T", which was produced in 10 XXNXXT calibers, 22 X11T or 22 mm PA. This gun, like its base model, was produced by the Turkish company Target Technologies, which is well known in the non-European continent for its models, similar to Glock pistols. The indisputable advantages of signal and traumatic pistols, many attributed to their appearance, which repeats the famous Austrian pistol. At the same time, the pistol was easily understood and assembled, and the order of assembly and disassembly of weapons was the same as that of the original Austrian Glock. In the Russian market, it seems, both the Turkish assembly model and the local one, Kurs-S enterprise from Sarapul, specializing in the production of traumatic and signal weapons, were available.

Despite the strong external similarity with the present Austrian pistol Glock-19, its signal version has another internal device. In particular, the simplest principle of a free gate is applied in its automation. The gun is constantly ready to fire. It lacks a fuse and uses a double action trigger mechanism with a hidden trigger, which facilitates the production of the first shot and provides security for the shooter if there is a cartridge in the chamber, the official website of RossImportOrgiya reports. The frame of the signal pistol was made of impact-resistant polymeric material, and the metal parts were made of TsAM alloy (zinc antifriction alloys). Only the most important structural elements were made of steel, which include the barrel liner, the body of the store and a number of parts USM. At the same time, the shops of the signal "Phantom" are compatible with the shops of the traumatic pistol. A number of accessories for the original Glock Austrian pistols (for example, the holster) is quite suitable for the signal pistol.

An unusual feature of the pistol was used ammunition caliber 5.6 / 16 (alternative designation 22NC). The cartridges of this caliber, used with the “Phantom” pistol, are produced by the construction company Hilti Corporation for their own gunpowder assembly guns, which are intended for plugging dowels in dense materials (brick, concrete, metal). At the same time, the HILTI 22 NC annular ignition cartridge of the 5,6 / 16 caliber is very similar to the blank cartridges intended for small arms, but changes were made to its design that do not allow it to be reworked into a combat cartridge. 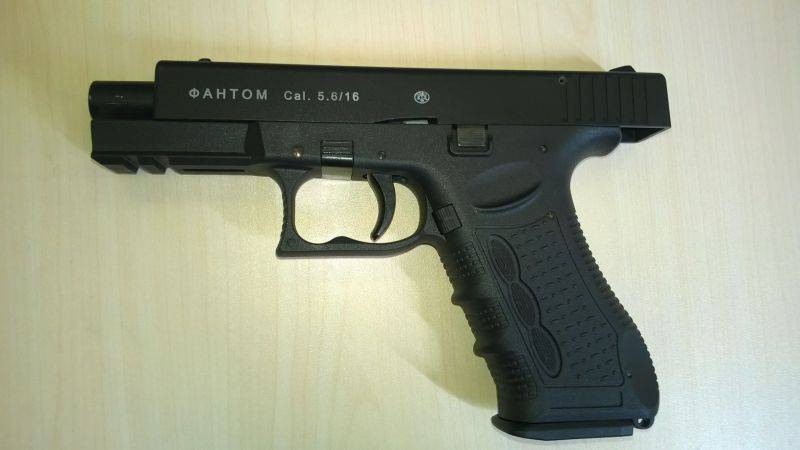 The advantages of such a mounting cartridge are called a louder sound when fired in comparison with the traditional for signal pistols cartridges with capsules "Zhevelo", as well as a low price (about 3,1 rubles per piece). To facilitate the process of reworking a traumatic gun for a cartridge of a smaller caliber, the designers decided to place the cartridge in a special plastic cartridge that can be reused. According to representatives of the trading company RossImportOruzhie, it allows for fourfold use. In addition, the cartridge enhances the sound effect of a shot from a signal pistol.

In modern realities, signal revolvers and pistols are bought by lovers of weapons for collections, since the acquisition and possession of such weapons do not require them to obtain a license. However, many use signal guns as intended. For example, with their help, you can safely and simply train a beginner in weapon handling skills. A shot from a signal pistol or revolver can attract the attention of others, for example, if you get lost in the forest or effectively scare away a pack of dogs. During sporting events with such weapons you can start the start of the competition. In addition, the type of such weapon, which is apparently identical to the combat models, and the sound of its shot can help prevent illegal actions against you or help to protect third parties from them. However, in such situations, you need to act as carefully as possible, assessing the possible risks, because your weapon is not even traumatic. 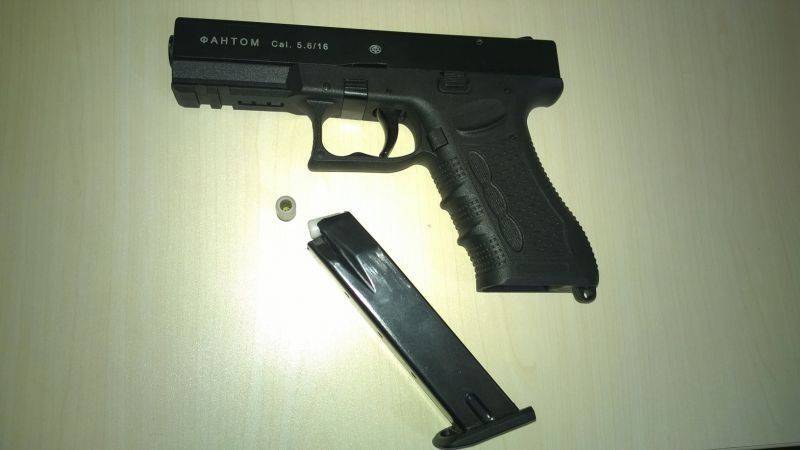