The most democratic corruption in the world

December 14 2015
16
During a recent visit to Kiev, US Vice President Joseph Biden spoke at the Verkhovna Rada of Ukraine and chided local politicians for rampant corruption in the country. “You cannot find a single democracy in a world where the cancer of corruption is so thriving. You can not find any such country - Biden was excited on the podium of the Ukrainian parliament. “Corruption does not allow building a successful democracy.” 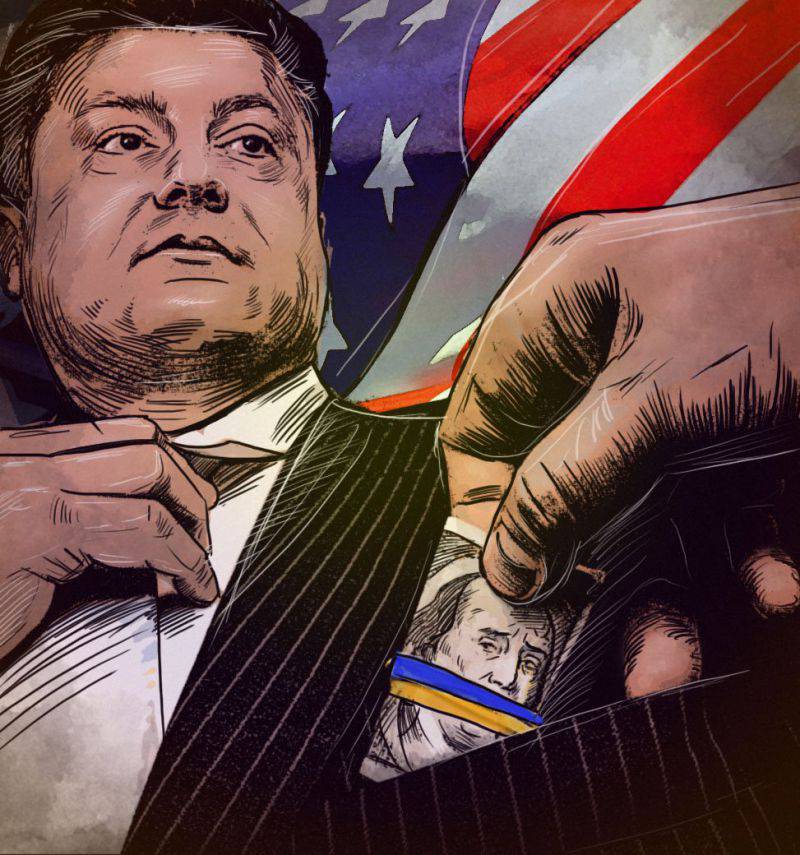 US media suspected Biden of hypocrisy

Together with the deputies of the American guest, the top Ukrainian leaders listened and nodded in agreement. Theme is clear to them. Petro Poroshenko during the presidency, their income increased significantly. The leader of the Progressive Socialist Party of Ukraine, Natalya Vitrenko, even calls the figure seven times. In the assessment of the opposition politician can doubt. But there are financial reports. Partially they are published in print. There are specific data. For example, the assets of the International Investment Bank, the main shareholder of which is President Poroshenko, have increased by one and a half times in the post-Mayd period, and the profit of the Kiev factory Roshen has increased ninefold over the past year.

Ukrainian Prime Minister Arseniy Yatsenyuk does not possess such wealth. According to the published declaration, in his purse - official salary and income from deposits of about forty million dollars a year. Nevertheless, rumors from the Ukrainian political system were leaked to the press that last October Yatsenyuk celebrated his second billion dollars earned by hard prime minister's work. According to the Ukrainian journalist and volunteer Alexei Mochanov, Yatsenyuk arranged a private dinner for “his own” about the first billion dollars earned in the summer.

In a word, the overseas guest could find examples of his accusations even among the high-level meeting participants, but he did not do that. Why? The answer was given by the influential American newspaper New York Times. She published scandalous data about the vice-president of the USA Joe Biden. “The credibility of Biden’s anti-corruption calls was undermined by the fact that his son, Hunter Biden, was linked to one of the largest gas companies of Burisma Holdings and its owner, Nikolai Zlochevsky,” the newspaper wrote after the US Vice-President’s fiery parliamentary speech.

History This has already emerged at the very beginning of the war in the east of Ukraine. Then, independent observers noted the interest of the gas company to the Donetsk shale fields. In April 2014, 45-year-old Washington Lobbyist Hunter Biden became a member of the board of directors of Burisma. American did not even bother that in London blocked the bank accounts of the owner of the company Zlochevsky. The British suspected him of money laundering. After Ukraine refused to provide the London investigators with documents on the case of the head of Burisma, the bank accounts were unblocked. The amazing loyalty of the usually intractable British financiers.

Referring to this case, Edward Chow, a senior fellow at the Center for Strategic and International Studies in Washington, concludes in the New York Times pages: “The fact that the son of the vice president was involved in the scandal with Zlochevsky’s firm undermined the Obama administration’s anti-corruption line in Ukraine. Unfortunately, Biden's father’s anti-corruption speeches only send a signal to other foreign countries who want to believe America that we are hypocritical in these matters. ”

When corruption is legal ...

The case of Joseph Biden is by no means unique. Corruption scandals marked the activities of his predecessor in the George W. Bush administration, Vice President Dick Cheney. Cheney came to high government office from the Halliburton Company, one of the world's largest producers of equipment for oil and gas production. Among other things, he led the company Brown & Roon, which was engaged in the construction of military barracks and the supply of food. As soon as Cheney was in the chair of the vice president of the United States, the company he controls immediately signed contracts with the Pentagon totaling several billion dollars.

This scandal managed to hush up. After a while, it turned out that due to connections in the Middle East, the Vice President managed to enrich themselves with 110 million dollars already at the expense of the head Halliburton Company. Time magazine has published a letter from an engineering officer’s official about a multi-billion dollar contract to rebuild Iraq’s oil industry in the interests of Halliburton. The official testified to the support of the transaction by Dick Cheney. But the vice president managed to ward off suspicion from himself.

That was 2004 year. Six years later, the Nigerian authorities blamed Cheney for returning to the Halliburton Company, and nine others suspected of bribing Nigerian officials for building a liquefied gas plant worth 6 billion in Bonnie Island. Americans are inaccessible to African justice. Their case was tried by a US court. The defendants pleaded guilty and in exchange for the termination of the criminal prosecution paid the United States a fine of $ 579 million.

America didn't even choke on that news. The same thing happened with another investigation of the New York Times - about the contributions to the Clinton Fund. The newspaper found out that Uranium One, controlled by the Russian Rosatom, transferred funds to the fund. ROSATOM gained control over this Canadian registered company after three separate transactions from 2009 to 2013.

The deal was strategic. Since Uranium One accounts for one fifth of all ore deposits in the United States, it was approved by the State Department, headed at that time by Hillary Clinton. After the third transaction, the manager of Uranium One made four donations to the Clinton Foundation totaling 2,35 million dollars. Contributions came from other managers associated with the company.

In the investigation of the newspaper, this example is not the most prominent among the questionable donations to the Clintons. Corruption compromising New York Times published in the spring, but it did not affect the decision of Hillary Clinton to officially announce his participation in the US presidential election in 2016 year.

It is appropriate to refer to the well-known political scientist, honorary professor at the American University in Washington, Allan Lichtman. A year ago, speaking to reporters following a vote in the US Congress, he admitted: “Corruption is legal in the United States” and revealed its nature.

“If you are an entrepreneur in America, the head of a corporation, a businessman and you want to get rich, then you are not drilling an oil well, not looking for gold,” says Likhtman. - You make political contributions. This is the most profitable investment in the United States. For several hundred thousand dollars, even for several million invested in election campaigns, we can talk about billions in profits. ”

The elections, which were estimated by a political scientist, collected 4 billion dollars. They bought political victories. For example, in Kentucky, where the leader of the Republican faction in the United States Senate, Mitch McConnell (Lichtman estimated “extremely unpopular in his own state”) spent 55 million dollars on reelection. Those who gave money to the polls know that politicians will take care of their interests.

“Our system is a hotbed of abuse of power, conflicts of interest, tax preferences, out-of-competition contracts and unfair norms,” correspondent Drew Griffith told CNN on CNN. - At 78 congressmen, family members include officially registered lobbyists. Russians are familiar with simple bribes - envelopes with money, etc. We, in the USA, specialize in “soft bribes” - you care about the relatives of the legislator, and the legislator cares about you. ”

However, Griffith is not all right. As they say, corruption is also corruption in America. Enough there and our usual bribery. There are many examples in the United States media of abuse of power by local officials. Since the beginning of the year, investigators opened thousands of criminal cases against employees of state, state, and city departments who were found to be providing illegal services for a fee.

Among the violations are illegal registration of a residence permit in the United States, the "protection" of criminal acts, obtaining certificates and licenses without exams. Experts say that in America, with money, you can solve absolutely any problem, and the list of illegal services provided by local officials sometimes exceeds the list of legal services.

There are examples of petty frauds, like a tax officer from Philadelphia who has come under investigation. The enterprising lady blackmailed taxpayers with threats to include them in the so-called “red base”, which automatically entailed unplanned audits. They could be avoided for just 400 dollars.

The financial chief of the city of Dickson, Illinois, appropriated 30 millions of dollars in budget money. She has been robbing the city since 2006. The investigators were unable to establish the fraudsters' accomplices, although it became obvious to them that she alone could not crank up such operations.

There are unclean and among the American police. The guardian of the order from the Californian city of Selma was caught while trying to establish a network for trading marijuana. As an assistant he took a couple of hardened criminals. A North Carolina police sergeant for substantial remuneration "showed increased attention to some crimes and lost sight of others."

This regrettable list goes on and on. Let me remind you that thousands of American civil servants fell for fraud, bribes, self-serving abuse of official position. Such crimes are opened in all departments of the United States without exception.

This is written by local media. But still they give more space to corruption in other countries. There is nothing surprising. So America is defending its right to exclusiveness, for a certain example to be followed by countries that have "embarked on a democratic path of development."

Perhaps it is not out of place, to publicly bring up foreign colleagues suspected of bribery. But it is necessary, at a minimum, to meet the criteria declared from the high tribunes and pages of newspapers. Otherwise, it turns out that Americans use corruption in other countries only as an excuse to once again rise above the planet.

As for the Ukrainian leaders, I think the hot filipiki of the US Vice President did not make a proper impression on them. In this theater, each has its own well-defined role. In some, it is enriched while society allows. At Biden - once again to declare the image of a civilized and incorruptible America. Only this undisguised hypocrisy has already annoyed even the compatriots of the overseas moralizer.

Ctrl Enter
Noticed oshЫbku Highlight text and press. Ctrl + Enter
We are
Results of the week. “Everything will go like clockwork: at first — in the evenings — singing, then pipes will burst in the toilets ...”Results of the week. "Aria of the Moscow Guest"
Military Reviewin Yandex News
Military Reviewin Google News
16 comments
Information
Dear reader, to leave comments on the publication, you must to register.