Aerofinishers for the Chinese aircraft carrier will not be delivered 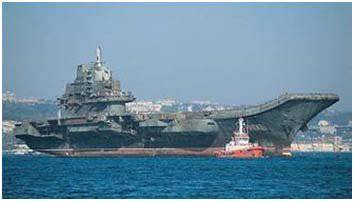 The construction of the first Chinese-made aircraft carrier has come up against new difficulties related to the fact that no aerofinishers were installed on the former Varyag aircraft carrier - and it is not clear where to get them.

Kanwa in 2007 from St. Petersburg exclusively reported that China purchases four aerofinisers, which were developed at the Central Research Institute of Ship Engineering and created at the Proletarian plant. Russian brake hooks and aerofinishers are produced at this enterprise. In the past, the PRC purchased for the destroyers the 956EM project and the 956E some components.

Kanwa, from his source at the enterprise, received information that the Chinese had visited the plant many times, and declared that they were ready to purchase four arresting units (the source used the term “acquisition”). Negotiations were held at the Rosoboronexport office. During the negotiations, representatives of the plant for the Chinese side held special presentations, and the Chinese requested materials and technical information.

During a regular visit to the plant in 2011, a Kanwa correspondent source unexpectedly reported that the negotiation process was difficult, and the leadership of the Russian defense industry may have decided not to supply airliners to China.

According to the source, instead of buying from the Proletarsky Plant and the Central Research Institute of Ship Engineering, Ukraine managed to obtain from Ukraine samples of brake hooks for the JL-9 training aircraft and the copied J-15.

What is the reason for the refusal of the Russian side to sell at the last moment aero-refineries to the PRC? Kanwa representatives of the Russian Foreign Ministry and the Ministry of Defense constantly asked questions regarding China’s purchase of Russian aircraft-carrying cruiser technologies, and always received an answer with the following wording: “Strategic weapon systems are banned for export to China. Nuclear submarines, aircraft carriers, and nuclear weapons technology fall under category of strategic weapons. "

However, with a deeper study of the Kanwa issue, it seemed that the real reason for the ban was not only the "ban on the export of strategic weapons systems to China," but also Russia's discontent over copying the Su-33 carrier-based fighter by the People's Republic of China. Central Research Institute of Marine Engineering delivered two air finishers for the Indian aircraft carrier IAC under construction and the Admiral Gorshkov being modernized TAVKR. The Central Research Institute has also assisted in the creation of a land-based training center deck aviation in Goa.

In 2007, a statement appeared that the design and production of aerofinists was a difficult task, and at that time only the United States and Russia had this capability. "In the past, four aerofinisers were installed on one aircraft carrier, as a rule, but only three were installed on the new AV India, which speaks only of the reliability of Russian-made systems."

Recently A. Plotnikov, a representative of the Rosobronexport company, told Kanwa that: "China actually wanted to purchase aerofinisers for the aircraft carrier, but we did not sell them." This statement confirms the information that China does not have Russian aerofinisers. The director of the Central Research Institute told Kanwa journalist at 2006 that China plans to acquire four arresting units, and several rounds of talks have already been held. However, in 2011, he stated that "we unexpectedly received instructions from the management, and our contacts with the Chinese side were suspended. In other words, we cannot supply any equipment for the aircraft carrier and in particular airborne detectors to China."

Somewhat later, the Russian Foreign Ministry announced that "strategic weapons systems and technologies will not be supplied to the PRC."

All this fully explains the reason that the aerofinishers were not delivered by August 2010 to the training center for flight training in Yanliang (Yanlian), and were not installed on the Varyag aircraft carrier during its first departure to the sea. Kanwa believe that the construction of the aircraft carrier of the PRC could face serious difficulties.

According to A. Plotnikov, Ukraine has old samples of arrestors, so there is a possibility that China may acquire them. However, according to Kanwa, even if this operation is carried out, the acquired aerofinisers can be used as familiarization samples. The training center NITKA has not so many aerofinishers.