December 13 2015
84
By the end of this year, the transfer of the Marshal Ustinov cruiser standing at the Zvezdochka enterprise in Severodvinsk to the military department was prevented by problems with suppliers and the customer’s underestimation of the amount of work, writes Kommersant. 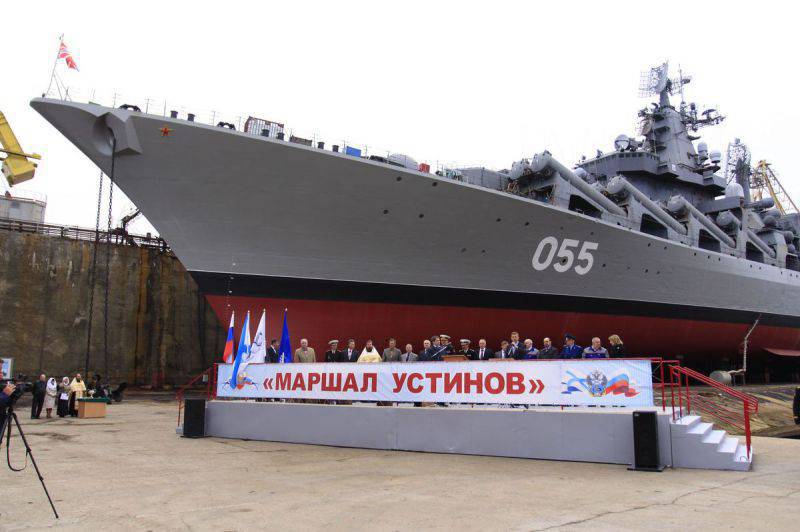 The ship will be ready no earlier than the second half of 2016, and the repair time can be adjusted upward again, since the equipment for modernization has not been fully supplied so far.

“Access to the open sea will take place no earlier than June 2016 of the year. Accordingly, the ministry will receive a missile cruiser no earlier than the second half of next year, a source at the United Shipbuilding Corporation told the newspaper. “At the same time, the transfer deadlines may shift to the right, as some problems remain unresolved.”

“Today, a larger volume of deliveries has been closed, however, significant problems have arisen due to the fact that the equipment for a long production cycle was delivered with significant delays,” he explained.

According to a source in the ship repair center itself, problems have arisen, mainly due to the mechanical part and electronics. For a long time, for example, waited for the delivery of a turbogenerator from the St. Petersburg Proletarsky plant.

“One of the main turbine generators was dismantled, and we waited for a long time to replace. Another contractor delayed the installation of the trunk cable for almost a year. Accordingly, the timeline has lengthened, ”he said.

Now the ship passes mooring tests. In parallel with them, several units are under construction, which will then be mounted on a cruiser.

“The modernization will affect the replacement of the electronic stuffing, the control systems and the component base of the cruiser's armament,” said the interlocutor at USC, “The electron beam displays will be replaced with plasma displays, and the microprocessors will also be replaced.”

According to him, “a separate problem remains the impossibility of access to the ship’s personnel for the ship’s documentation: the Marshal Ustinov was built at the beginning of the 1980s in Ukrainian Nikolaev. All documentation remained in the branch of the designer of the ship in Ukraine. ”

The source also noted that "the real volume of repair work more than doubled the planned." “With 2010, we have now entered into service contracts. And only in 2014, when it became clear that the scale of repair goes beyond the scope of service, they signed a new contract with the company for upgrading and repair, ”explained the source.

The press service declined to name the contract, explaining that this is confidential information.

“The ship will be handed over to the Russian Navy in the second half of 2016. This period was approved by the customer and fixed in the relevant decree of the Russian government of 2015. Due to this period a large additional amount of work on the modernization of the electronic systems of the cruiser ", - told in the USC

"To date, a large amount of repair and restoration work has been carried out on the cruiser: repair of the fifth and sixth gas turbine generators has been completed, installation of covers for similar hatches, repair of decks, and exterior painting of the ship are underway," the press service added. 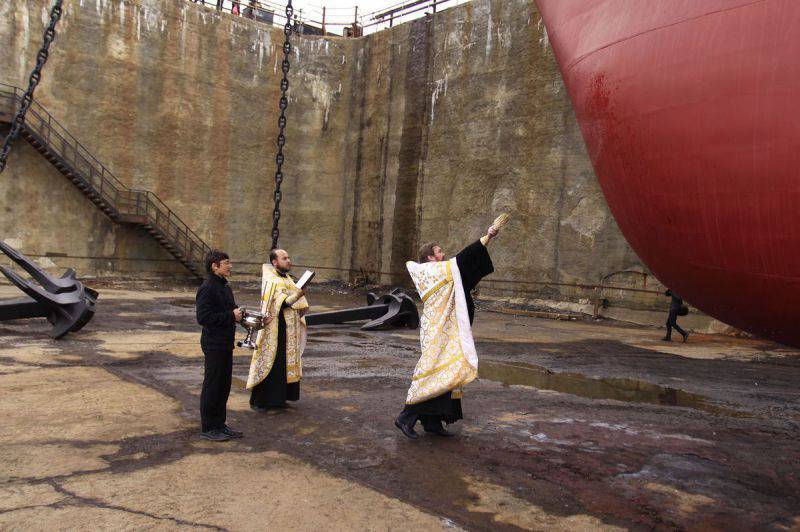 Consecration of the cruiser Marshal Ustinov.

Ctrl Enter
Noticed oshЫbku Highlight text and press. Ctrl + Enter
We are
The flag is hoisted on the nuclear submarine Severodvinsk!
Military Reviewin Yandex News
Military Reviewin Google News
84 comments
Information
Dear reader, to leave comments on the publication, you must to register.