Syria, the war continues - the attack in Homs. Report from the scene of the tragedy

December 14 2015
15
... with their hands torn to the blood, raise the concrete slab. From under it get a gray-haired woman. Severe wound to the head, eyes turned into two hematomas. Grandma is laid on a stretcher, but she is trying to get up 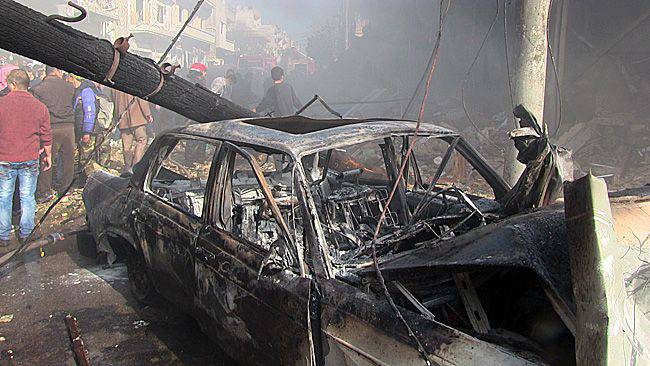 One floor below, a woman lives below us, she has three sons, one died last year near Homs. Here, in Syria, after 3,5 years of hard, devastating war, war has come to virtually every home. Someone lost loved ones, someone lost at home, all acquired. In the best case, the people lost a quiet peaceful life, its quiet measured rhythm. Major cities are cut by a network of blog posts, each is stopped, checked trunk, bags. If you are from another region of Syria, this may be a reason for inspection.

There is reason for such suspicion. Bloody terrorist attacks are still taking place in the country. The peak of terrorism came in the 2012-2013 years. The cars filled with explosives were then torn from schools, universities, government agencies, and markets. Beat on the most painful. School in Homs, here 30 October 2014, the car bombed up. The children were just leaving the classroom, after the car from the other end a suicide bomber exploded. 50 children died. Their scraps ate into the plaster of the facade of the building so that it did not work out to clean, these scraps are still on the facade.

The world habitually did not notice the tragedy, no one walked the streets wearing T-shirts "I am a child from Homs" or did not paint avatars in social. networks in Syria flag. Because all people are equal, but there is smoother. But life goes on, measures were taken, intelligence work was strengthened. Entrances to schools are blocked with concrete blocks to prevent the entrance of the car to the entrance, to the cluster of children. So that if it explodes, then where the crowd of children dissipates, it will become smaller. To prevent such a concentrated number of victims. Sounds terribly its practicality. 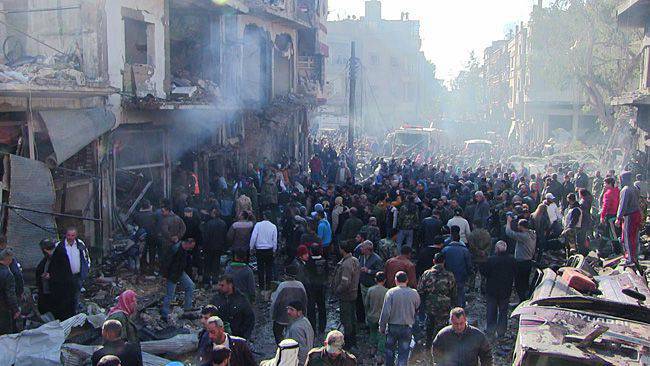 Yesterday we mounted the video before dark. We drove into the night. Directly in front of us, the rare evening cars began to unfold and drove towards the one-way traffic of a wide avenue in the city center. After a few tens of meters, we saw fruit vendors blocking the way with plastic chairs. They explained to us that they had discovered a mined car. In Homs, there is a shortage of electricity, street lighting is turned off. Ahead, among the palm trees, in the light of the headlights, we saw how the sappers, like ghosts in the night, were approaching the dark car.

It became terrible at the thought of how many explosives there might be, stuffed with balls and nails, what a hellish landmine would be like. For the first time during my work in hot spots, I didn’t want to get a camera and shoot, I wanted to turn around and leave as soon as possible. And the sappers going to the car cannot turn around and leave, as can those fruit sellers who at their own risk warn drivers about the danger. Can you imagine how much “Yasharli” would scream today if the signal of a car bomb was passed in Paris? Because all people are equal, but there is smoother. 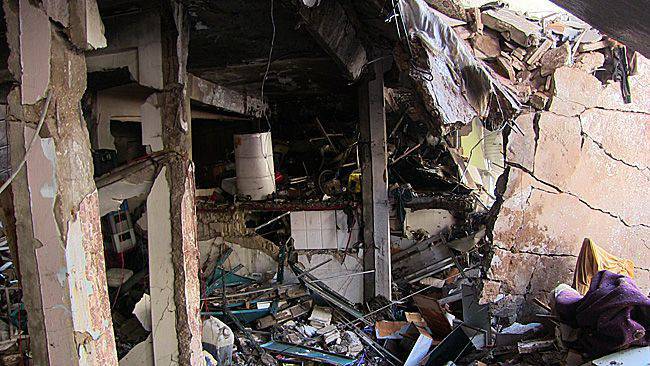 This morning in Homs began with a terrorist attack. In the area of ​​Az-Zahra, a mined car blew up. According to another version, a suicide bomber exploded. We arrive at the place. The bulk of the dead and wounded were taken. Here the dead are taken out with the wounded in the first minutes after the explosion. The hospital will already understand who is alive and who is not. The impression after the air strike.

The facade of the house collapsed, the house opposite suffered badly. Not only glass was knocked out, frames, doors, shutters of shops were taken out. Machines standing at the epicenter threw to the next side of the street. I see a piece of car, only the bottom, twisted holes with small holes - the terrorists' car was stuffed with nails. Classics of the genre. I think that the car of terrorists is in front of me. It turns out no. From the car of terrorists there was only a piece of the engine. They attached a piece of human meat. Firefighters pour fire - the building burns. The street is littered with broken bricks, fragments. From this water hoses are torn, watering the street and onlookers. The water in the sun plays a rainbow.

Rescuers and volunteers work inside the exploded building, despite the fire and smoke. Random onlookers also join the excavations. Inside the building, the walls of the ceilings were demolished, the store shelves collapsed, then everything caught fire. The terrorist blew up a car filled with explosives at the moment when the car with gas cylinders was unloaded. Syria does not have a centralized gas pipeline, but there are many gas stoves. Every morning a car arrives with gas cylinders and exchanges empty for full ones. And today in 10.30 there was such an exchange. 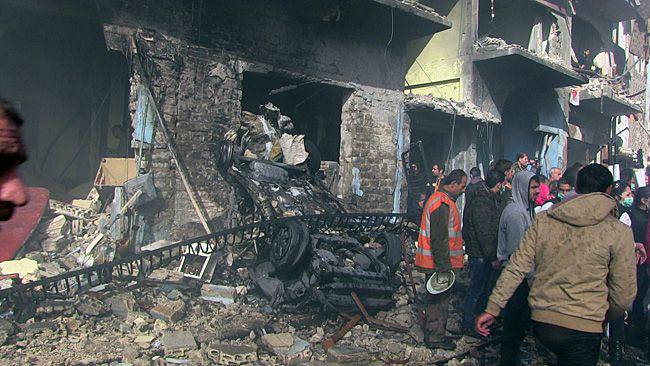 Inside the room, despite the destroyed walls, everything is in smoke. I follow the rescuers, I begin to choke, the smoke hurts my eyes. Rescuers pour mash of fragments in the place where there was a counter. Ordinary people help rescuers. Here is a man in an expensive velor jacket. Here are so trendy. The man pulls out the stones, the remains of stalls, aluminum beams. Volunteers and rescuers keep up the pace.

Looking around. It turns out that I am standing next to the staircase. The overlap of the stairs from the explosion was crumpled, they hung only on the reinforcement strapping, the concrete was crushed. The walls are knocked out. Next to the store were apartments. Now all this is a single space, visible sofas, remnants of lampshades, televisions. On the wreckage of an apartment tenants roam. They are at least alive. Literally in 10 meters from them, under a pile of burning concrete, someone is dug out, flooding the debris with water. Work fast. A thought flashes that they really hope to save someone alive from this? 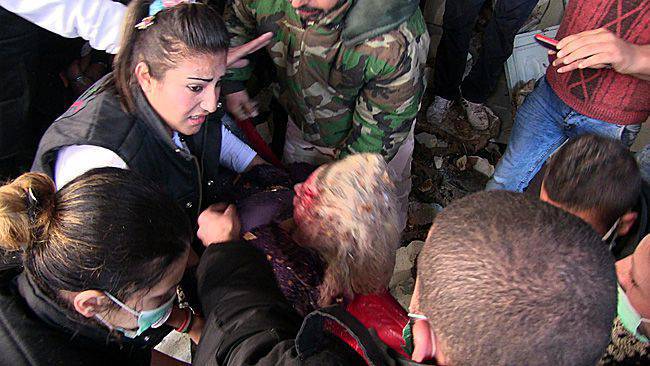 Suddenly, the people liven up, start screaming. Someone is running with a stretcher. People start to work with tripled zeal. Vigorously in the direction of flying concrete blocks, shovels and with their hands torn to the blood, raise the concrete slab. From under it get a gray-haired woman. Severe wound to the head, eyes turned into two hematomas. Grandma is laid on a stretcher, but she is trying to get up. Run the stretcher carried to the ambulance of the Red Crescent.

Ctrl Enter
Noticed oshЫbku Highlight text and press. Ctrl + Enter
We are
Armor is strong. Report from the armored plant, where equipment is repaired for ATO (Ukraine)Syria - closeup
Military Reviewin Yandex News
Military Reviewin Google News
15 comments
Information
Dear reader, to leave comments on the publication, you must to register.