Troops will get drone drone 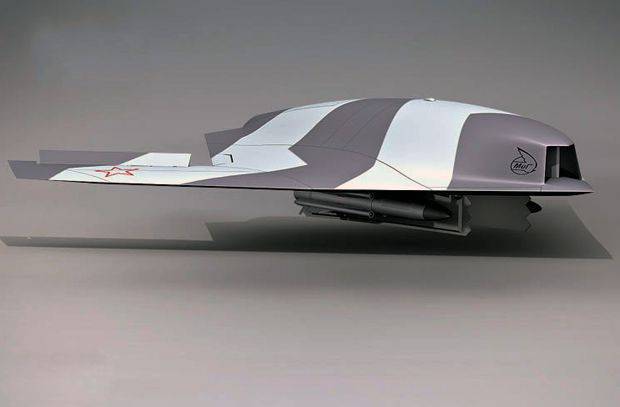 Russia restores the missing link in the system of aerospace forces

In 2016, the Russian army will begin to receive new drones (UAVs) capable of overcoming extremely long distances. In particular, the devices will go to unmanned units aviation Eastern Military District. Earlier, the media reported that in 2016 promising UAVs capable of covering up to a thousand kilometers will be adopted.

As experts assume, it is a question of heavy shock complexes in weight from approximately 1 to 20 tons. Heavy vehicles can carry several bombs and even air-to-ground missiles on board. At the moment, the Russian army does not have percussion and advanced devices capable of performing long-range reconnaissance.


The Russian defense industry began work on creating such drones in the middle of the 2000s, but under Anatoly Serdyukov, the case was limited to demonstrating prototypes or trying to buy UAVs from Israel. Fully fill the missing link in the system of the Air and Space Forces of the Russian Federation is planned to 2020 year.

In January, 2015, Deputy Defense Minister Yuri Borisov announced that a heavy UAV was created in Russia, capable of conducting reconnaissance and destroying targets. The tactical and technical characteristics of the device are kept secret. According to media reports, the Sukhoi Design Bureau (Moscow), Sokol Design Bureau (Kazan) and Tranzas Aviation CJSC (St. Petersburg) are working on the heavy drone project.

In early October, the 2011 of the year in the competition of the Ministry of Defense for the creation of UAVs weighing up to 1 tons won the project "Pacer", and up to 5 tons - the project "Altius-M". The drone drone weighing up to 20 tons is being developed by the Sukhoi OKB based on the Scat project, which RSK MiG has been working on since 2005. The new project was named "Hunter".

According to unconfirmed reports, the Hunter will simultaneously be a fighter of the sixth generation. His first flight is expected in 2018 year, and entry into the troops - in 2020-m. Like the Scat, the new drone will get the shape of a flying wing (the so-called “flying saucer”).

Simultaneously with the “Hunter”, “Sukhoi” is carrying out development work on the creation of the medium-range vehicle “Zenica”, whose speed will be 800 kilometers per hour. Presumably, this UAV is created on the basis of the Tu-1970 “Flight” developed in 143-ies, which is intended for conducting tactical reconnaissance in the front-line zone.

Another project of the Russian VKS is the Dozor-600, which belongs to the class of heavy medium-altitude drones with a long duration of flight. Experts suggest that the device is a direct analogue of the American MQ-1 Predator. Despite the fact that the “Dozor-600” weight is 720 kg, it is capable of performing the functions of an impact UAV.

Russia is catching up with the United States

The range of use of unmanned aircraft is extremely wide, but it is of particular importance in modern theater of operations. Operation of the aircraft is more expensive, and their flight is fraught with a risk to the life of the pilot: the enemy’s air defense and air force are not asleep, and anything happens in the sky.

Therefore, reconnaissance and attack drone is a great assistant to combat aviation and ground forces. In the future, drones will be able to carry out the most risky missions, which are now afraid to send aircraft, ground reconnaissance and special forces.

The significance of the UAV for the effectiveness of the actions of the armed forces at the Russian Defense Ministry was realized after the conflict with Georgia in August 2008 of the year in which the enemy quite successfully used Israeli-made complexes. Initially, it was decided to eliminate the backlog in the field of UAVs by importing devices from Israel Aerospace Industries.

Model UAV "Altius-M". Photo: Marat Khusainov / prav.tatarstan.ru
However, the practice of purchasing foreign equipment, which was widely used by Serdyukov, was soon discontinued. The Israeli side, after supplying Russia with small and medium-sized UAVs, Bird-Eye-400, I-View and Sercher Mk.2, refused to sell the more popular heavy unmanned systems.

In 2012, Deputy Prime Minister Dmitry Rogozin announced that the Russian army would have its own attack UAV, which would not yield to the American counterpart. The massive influx of UAVs into the armed forces of the Russian Federation began as early as 2013. While in service with the Russian VKS are drones of short and medium range (mainly "Orlan", "Flight", "Strizh").

Only the United States and Israel have full-fledged attack drone aircraft. Russia, along with China - in the list of catching up countries. In the USSR, drones began to be created from the 1950-ies. BLA mainly used in the interests of the GRU. These were small-sized supersonic high-altitude vehicles, distinguished by high technological effectiveness for their time. In addition, in the USSR, UAVs were actively used as “target airplanes” for training fighter aircraft and training of firing from anti-aircraft installations.

In an interview with the “Russian Planet”, the founder of the Military Russia portal Dmitry Kornev noted that in the West, they had somewhat realized the possibility of a wider use of UAVs. In the Soviet Union, a “boom” for drones occurred later - in the middle of the 1980s. During this period, the Yakovlev Design Bureau created the “Bumblebee-1” advanced at that time.

“With the collapse of the USSR, the experimental design and production work was naturally stopped. The enterprises oriented to the Ministry of Defense did not create drones, as there was no order, and private manufacturers in the Russian Federation appeared only at the end of 1990-s - the beginning of 2000-s, ”stated Kornev.

The liquidation of the USSR led to the degradation of the military-industrial complex and, as a result, unmanned aircraft. Russia missed the key trend in the field of UAVs - a move away from miniaturization towards the creation of heavy drones. During the period of hard times in our country, microelectronics and robotics, which are so important for the development of promising UAVs, have strongly sunk. Also, the Russian defense industry has problems with the development of software and operating systems necessary for the operation of UAVs.

Dmitry Kornev believes that the Defense Ministry has learned the lessons, and the necessary work is already underway. According to the expert, one of the options for additional stimulation of the UAV industry may be government investments in commercial production, since the universality of the functions of reconnaissance drone does not imply a special regime of secrecy.

Air operation in Syria can be an excellent "testing ground" for testing in battle drone drone. Currently, only reconnaissance drones perform tasks in the Syrian sky. Considering the plans voiced by the Ministry of Defense, it can be expected that in 2016, heavy drone vehicles will be used in the Syrian operation. The need for the earliest possible arrival of UAV drums into the VKS armament is further illustrated by the tragic incident with the Su-24M.