History in the exam

December 12 2015
129
What only sonorous epithets did not deserve the Unified State Examination with its test system in the press, on the sidelines of the State Duma and the Federation Council, at numerous conferences and round tables, in teaching and teaching circles, and among the students themselves - from the most innocent to frankly unprintable ... And officials assure us that it is the Unified State Examination that is the best, most objective, and the most honest and non-corrupt form of the simultaneous delivery of school graduation and entrance examinations to a higher educational institution. 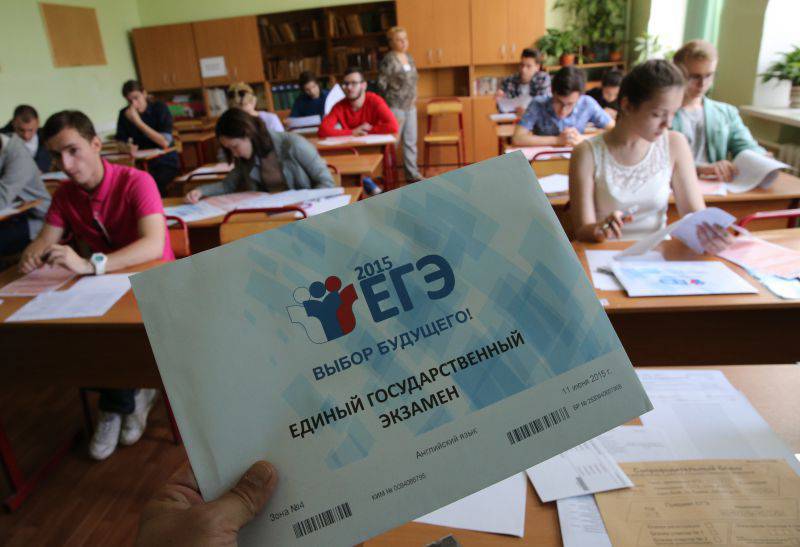 Photo by Artem Geodakyan - TASS
It would seem that it is easier to solve this overripe problem by taking a steamy turnip - and taking a simple regulatory (departmental) act to eliminate the USE as the ONLY AND MANDATORY form of the final certification in the country. But it was not there. The ubiquitous overseas "partners" will stand to death for this project of paramount importance for them, because they have long been well aware of the ancient Eastern wisdom: "If you want to conquer a people, bring up its children."
True, we are assured that optimization of the USE is not far off. The system is finally brought to perfection. However, what these “efforts” are worth is clearly visible from the next USE demonstration versions prepared and approved by the Federal Institute of Pedagogical Measurements.

As you know, the current (last) version of the USE stories Russia is no longer divided into three (A, B, C), but into two (1 and 2) parts, since our reformers were still forced to remove from it the sharply criticized “guessing game” built on the principle of simple “spear”. But has the USE itself become significantly better, as the ministry assures us? Let's figure it out.

The 1 part of this Unified State Exam contains 19 questions that are divided into overtly primitive or elementary tasks that even it is indecent to ask graduates of the 11 class. Totally, this part with 100% of correct answers gives the maximum total 39 points, which, of course, is not enough for entering a university. Although not even that is important, but what is the level of these tasks.

For example, question No. 2 of this part of the USE is as follows: "Establish a correspondence between events and years: for each position of the first column, select the corresponding position of the second column."

EVENT OF THE YEARS

Sorry, but what kind of student in 11 (graduation !!!) class must be completely ignorant to write that the Caribbean crisis happened in 988, the Battle of Borodino took place in 1962, and Moscow was founded in 1939. For whom and why are such tasks supposedly “reformed” by the Unified State Examination offered?

The assignment under the number 17 is of a similar nature, since only absolute helicopter writes that the author of Lay of Igor was Ilya Repin, that the Nobel Prize in Literature was awarded for Domostroy, and the novel Silent Don illustrates the events of the church split. And such tasks in the first part of the exam are a dime a dozen ...

Of course, such tasks are included in the USE for a reason, but rather consciously, because they give at least some guarantees that:

1) a well-defined cohort of graduates of the 11 class, who chose the history as an exam, will not get "unsuccessful" for their answers and will become the owner of the coveted high school diploma;

2) their teachers will once again pass a kind of proficiency test and will become the owners of a new portion of stimulating points, and hence a small increase in their own salary;

3) School administrations will not get a scolding from higher-level management structures;

4) regional ministers will report to their governors on successful school certification results, and…

... 5) The Ministry of Education and Science will once again report on the 100% passing of the USE and the amazing results of its vigorous activity in the field of Russian innovative education.

Meanwhile, it is completely obvious to any sane person that all this kind of task is “from the evil one”, for an adult young man of 17 years old who has completed an 11-year school course is somehow not very convenient to ask about how many 2 XX2 will be by offering him a choice of 4 answer choices ...

The remaining examination scores (total 61 score with 100% of correct answers) fall on the 2-th (complicated) part of the exam.

However, the nature of these assignments will confuse even the most eminent doctors of science and academicians of the Russian Academy of Sciences, who are unlikely to be able to invent answers to the questions asked. For example, in question number 24, it is required to provide the pros and cons of the following statement:
"In historical science there are debatable problems on which different, often contradictory points of view are expressed, and then one of them is allegedly cited:" Russia in the 17 century was in a state of isolation from the economic, military and cultural achievements of the countries of Western Europe. "

What can I say to the program developers about this? First, scientific problems in themselves are always debatable, and therefore the very wording of this question contains a complete nonsense. Further, it’s not at all clear to me where the authors of this masterpiece assignment took this point of view and who is the author of this “scientific discovery”? But the most interesting thing is not even in this, but in another: what answer did the compilers of the EGE themselves offer to their question?

1) “In the 17 century, significantly fewer ships came to Arkhangelsk than most European ports because of reduced navigation ... Russia's external contacts were weaker than those of Western Europe.” What does it have to do with it? The fact that ships came to Arkhangelsk significantly less than to European ports was not connected with the isolation of Russia, but with the well-known climatic conditions of the Russian Pomerania and the shortened navigation in the seas of the Arctic Ocean. Moreover, foreign merchants, first of all the British and the Dutch, fought for the Russian domestic market and the monopolistic position on it for death.

2) “The activity of Moscow diplomacy was significantly lower than the activity of most European countries.” Well, this answer clearly draws on some historical award named after Mr. Vladimir Rezun or Mr. Anatoly Fomenko and Gleb Nosovsky from the notorious Dynasty Foundation. I wonder who told our developers this terrible secret? And which European countries are meant? Spain, Portugal, Greece, Germany? And how does this indicate the "isolation" of Russia? 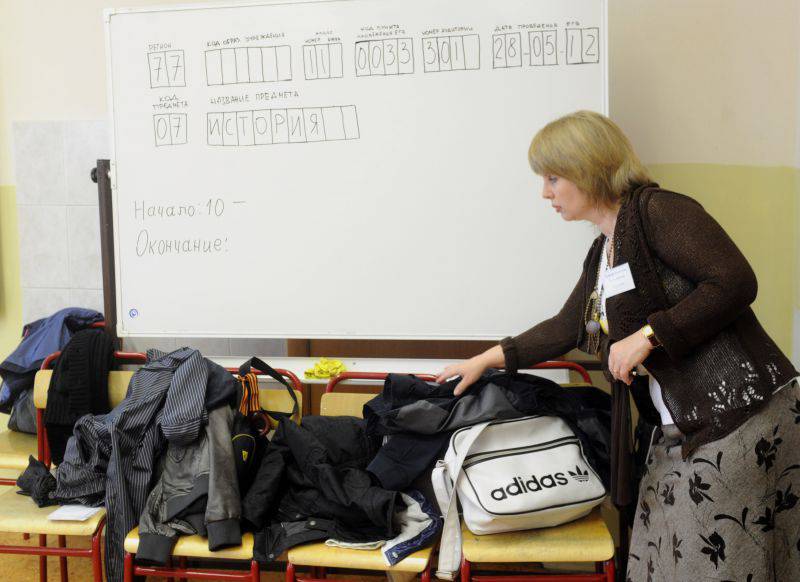 Unified State Exam in Russian schoolsPhoto by Sergei Fadeichev - TASS
Any more or less educated person is well aware that in the 17th century the Ambassadorial order, headed at different times by Ivan Gramotin, Almaz Ivanov, Athanasius Ordin-Nashchokin, Artamon Matveev, Vasily Golitsyn, Emelyan Ukraintsev and other diplomats, established close and active contacts and Polish-Lithuanian Commonwealth, and with the Austrian court, and with the Swedish kingdom, and the Ottoman Empire, and with other world powers.

Sorry, but wasn’t Russia part of the Holy League, created in 1684, to repel Ottoman aggression as part of the same Austria, Rzeczpospolita and other European powers? At the end of the 17th century, the same Peter I, as part of the Great Embassy, ​​visited almost all countries of Western Europe, including Kurland, Poland, Hanover, Prussia, England, France, Holland, etc. Moreover, when he received news from Moscow about the beginning of the next Streltsy rebellion, he did not fail to meet with the Holy Roman Emperor Leopold I and the Polish king and Saxon Elector Augustus II the Brave on the way to the First Throne.

3) “Until the 1710's Russia could not master the production of modern weapons, which were owned by Western countries (weapon bought abroad). This indicates a lack of close contacts with the West, involving the adoption of production technologies. ”

Alas, but with such arguments, the authors of this assignment fully demonstrate absolute ignorance of elementary facts. For example, it is well known that as early as the 16th century Russia produced its own pishchals (similar to European arquebuses and muskets) of various calibers, and 1582 calibers sounded in the inventory of 28, from 1 / 8 grivnas to pood. Moreover, in the future, the most rational designs of firearms were selected, and the 1626 / 1647-14 food gauges from 1 / 2 to 8 grivules are mentioned in the “List of guns and pistils” in the XNUMX – XNUMX years.

A similar pattern was observed in the cannon case. In the 17th century, along with the Moscow cannon (“large”) courtyard, there existed “small” cannon yards in Veliky Ustyug, Vologda, Novgorod, Pskov, Tobolsk and other cities of the Moscow kingdom. Moreover, in addition to state-owned gun manufactories, in 1630, 15 private factories were built in Tula, Kashira, Aleksin and Olonets, which produced cannons, shells, handguns, etc.

Only in the 1668 – 1673 years at the Tula and Kashira metallurgical plants did the tsar's treasury buy more than 154 000 hand grenades, almost 25 500 cannon grenades, more 42 700 cores, etc. At the same time, quite a significant part of this weaponry and ammunition was exported to Europe, including cannons, the number of which exceeded 8000 units.

In connection with this circumstance, a completely legitimate question arises: “Why should a pupil of a nameless who does not share the point of view of an anonymous“ scientist ”about isolating Russia from the economic, military and other achievements of Western Europe should look for arguments in favor of this point of view?” such "why" the whole car and another truck ...

I think that the arguments I brought up clearly demonstrate not only the inferiority of the USE itself, its "highbrow" assignments, but, most importantly, their compilers, experts who sometimes work against the national interests of the country.

Ctrl Enter
Noticed oshЫbku Highlight text and press. Ctrl + Enter
We are
What you didn't want to know about England
Military Reviewin Yandex News
Military Reviewin Google News
129 comments
Information
Dear reader, to leave comments on the publication, you must to register.