Constitution Day of the Russian Federation. Is there any reason to criticize certain points of the Basic Law? 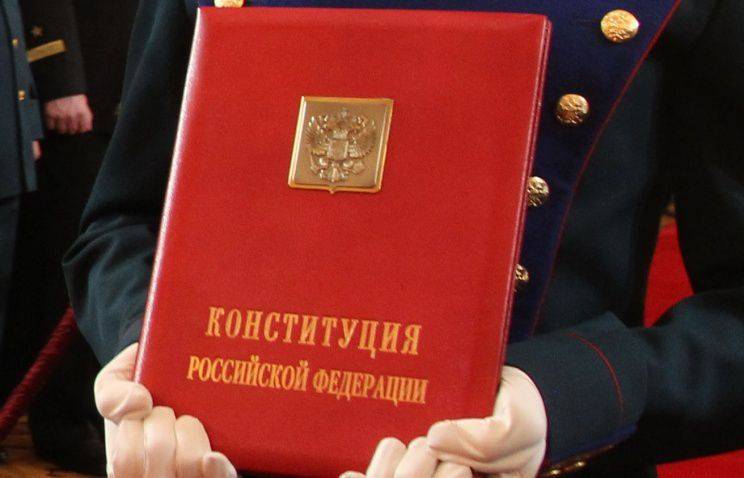 It would seem that such simple and correct words. On the rights of citizens, on the protection of sovereignty, extending from Kaliningrad to Anadyr, from Derbent to Murmansk. However, it so happened that the Constitution of the Russian Federation itself, which today celebrates its next birthday, since the establishment of the new Russia, gives reason to reflect on, but does the basic law really protect all civil interests and all 100%? And the more actively attempts are made to contain Russia by our big and small “friends,” the more clearly the dubious background of some of the statements, which are fixed in the main law of the state, appears.

So, forgive the Basic Law, today we will talk about some constitutional clauses that, if not from the very beginning, then from relatively recent times look ambiguous, to put it mildly.

First, about the already mentioned freedom of speech, which the Constitution, frankly speaking, is commented not on freedom, but more on permissiveness.

Article 29.
Item 1.
Everyone is guaranteed freedom of thought and speech.

If we consider these points purely from a legal point of view, it turns out that, for example, agitation and propaganda antistate activities (well, for example, the recent case with calls for a revolution in Russia of one notorious former prisoner, before being released) is quite acceptable, as she, firstly, does not contradict paragraph 2, article.NUMX, and secondly may be completely guaranteed as a freedom of thought and speech, as the first paragraph of the same 29 constitutional article says.

That is, with the particular desire of special individuals, any anti-state agitation, which includes appeals "to the ground, and then," is recognized by the Constitution as completely legitimate, and the Fundamental Law itself derogates from all other laws that try to say that

There p. 4 Art. 13, which sounds like this:
The creation and activity of public associations whose goals or actions are aimed at changing the foundations of the constitutional system and violating the integrity of the Russian Federation, undermining the security of the state, creating armed groups, inciting social, racial, national and religious hatred are prohibited.

Here, it would seem, and prohibits the notorious revolution, but it was not there. Any mediocre lawyer will say that one thing is public associations, and another thing, for example, pseudo-religious organizations or “individuals-individuals”.

The result is a paradox: the current Constitution, adopted in 1993, to put it mildly, not without the hint of the same “big friends” of Russia, does not itself contradict the unconstitutional coup, which is now called “friends of friends” ... Nonsense, but in fact So.

Another section of the Constitution to which there are certain issues. This is a section on the country's president.

So, according to the Basic Law, any citizen of the country who has been permanently residing in Russia for at least 10 years can become a president of Russia. This citizen’s age cannot be less than 35 years. It would seem, what is the paradox? And the fact that the Constitution of the Russian Federation says nothing, for example, about the criminal record of the candidate. That is, it turns out that if this or that citizen managed, roughly speaking, to wind up the deadline, for example, for embezzling state property on a particularly large scale, then the path to the presidency is in fact open to him. The Constitution does not preclude the election of such a citizen. Well, that at least is not encouraged ...

The Constitution of the Russian Federation does not say that a deputy of parliament can in certain cases be deprived of a deputy mandate. This leads to a phenomenon that probably is not found in any other country in the world. Russia is such a free state that, being a deputy, we can be suspected of committing a crime, run away from justice abroad, not appear (naturally) at parliamentary meetings, openly declare that certain representatives are voting for you, and (lo and behold!) Everything this time to remain a deputy of the State Duma of the Russian Federation and at all corners throw mud at the country and the people that you are supposed to represent ...

At the same time, somewhere in the walls of the State Duma of the Russian Federation:
Parliamentarians are obliged to guard the rule of law, the peak of which is the Basic Law (Sergey Naryshkin).

So the parliamentarians are standing. Particularly on guard is the deputy Ilya Ponomarev ... Now in Zurich, now in New York, now in Vilnius ...

The basic law - a thing that, by definition, should create a strong state base - can not be taken and thrown into the furnace only because there are points of doubt in it. Indeed, on the basis of the Constitution, a modern state was built and a modern society was formed. On the basis of the Constitution, there is a system of public and state institutions. But the Constitution should not turn into a dead document, in a number of its areas further and further extending from the objective reality that Russia faces today. Finding a balance between preventive changes to the Basic Law and the inviolability of its most important contours is a task that looks very relevant on Constitution Day.

Ctrl Enter
Noticed oshЫbku Highlight text and press. Ctrl + Enter
We are
Birthday of the young countryResults of the week. “You see, every year my friends and I go to the bathhouse. This is our tradition. ”
Military Reviewin Yandex News
Military Reviewin Google News
224 comments
Information
Dear reader, to leave comments on the publication, you must sign in.