December 15 2015
3
In 1985, an armored repair-evacuation vehicle BREM-2 was created, built on the basis of the infantry fighting vehicle BMP-1 and designed to service such equipment. However, in just a couple of years it took a new car of this class. In 87, the BMP-3 was adopted, differing from its predecessors in a number of parameters, including dimensions and combat weight. For this reason, the development of a promising BREM on the basis of a new infantry fighting vehicle was soon launched, which could fully solve all the tasks.


The development of the BREM was carried out by Kurganmashzavod, which had previously created the base BMP-3. The technical assignment implied the use of a ready-made chassis, on which a set of special equipment should be installed to solve the main tasks. The new BREM, as well as other equipment of this class, should have been able to pull out and evacuate damaged light armored vehicles, as well as participate in further repairs. Characteristics of the machine should have been able to maintain light armored vehicles of various types, primarily the BMP-3. The project of the new repair and recovery vehicle received the designation BREM-L and its own name "Beglyanka". 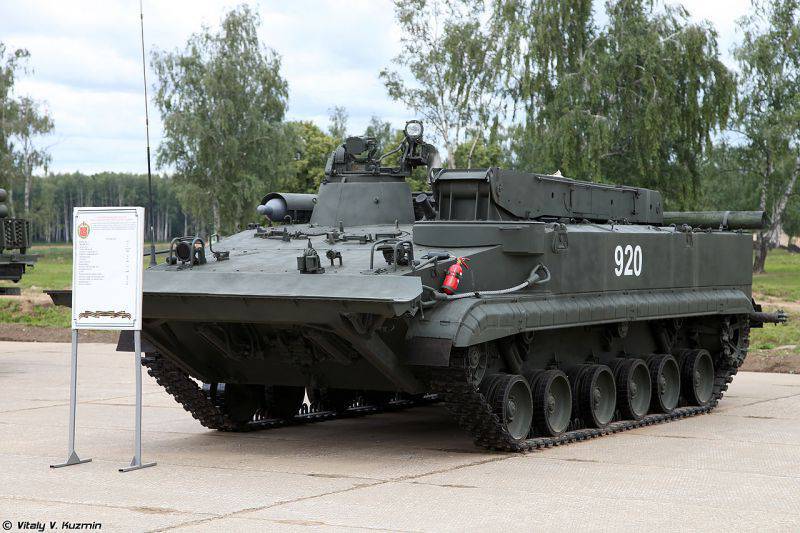 These requirements affected the list of special equipment offered for installation on a new machine. It is noteworthy that the experience of developing and operating such equipment was used in the new project. As a result, BREM-L received a coulter-dump, a crane, a traction winch, as well as a set of various tools and additional equipment. At the same time, the special equipment of the machine was adapted to work with the latest models of equipment.

Being a further development of the base BMP-3, repair and evacuation BREM-L retains a large number of its components and assemblies. The overall layout also remains, but the individual sections of the hull are undergoing significant changes due to the installation of new equipment. Thus, the control compartment with the workplace of the driver is still located in the middle of the front of the case. Next to it are places for two other crew members. The fighting compartment of the corps is given for additional crew seats and some special equipment. The power plant, as before, is located in the stern of the hull and has a small height.

The body of the repair and recovery vehicle has minimal differences from the units of the base BMP-3. It is made of rolled aluminum armor and provides anti-bullet all-protection protection. Frontal projection of the hull withstands hitting small-caliber artillery shells. Since the BREM-L should work in the conditions of the leading edge and the constant risk of enemy attacks, some weapons are envisaged. In the center of the hull, on the side of the commander's turret, there are six smoke grenade launchers. In the event of an attack by enemy personnel, the commander has a PKTM machine gun with 1000 ammunition ammunition.

The layout of the machine. Figure Armor.kiev.ua

The crew of the BREM-L consists of three people: the commander, driver and coupler-scaffold. If necessary, the crew can be reinforced by two repairmen. The driver is located in front of the case, in the center. To the right of him is another workplace, and the commander is located behind him, on the starboard side. Place commander is equipped with a turret. Additional seats are located inside the former combat compartment and fixed on the sides. The crew has a set of surveillance devices that provide driving and tracking of the situation both during the day and at night.

The multi-fuel engine UTD-29T with power 500 hp is located in the rear part of the hull. The engine torque is transmitted to the stern drive wheels via a mechanical transmission. The undercarriage is borrowed from the base BMP-3 without any design changes. It consists of six road wheels with individual torsion bar suspension on each side. Some rollers are reinforced with additional shock absorbers.

One of the main tasks of the BREM-L "Beglyanka" is the evacuation of damaged armored vehicles from the battlefield. To perform such operations, the machine is equipped with a set of special equipment. The main means of evacuation are towing device, traction winch and coulter-bulldozer. With their help, the crew can prepare the platform, and then take the damaged equipment in tow, including after it is pulled out of the mud. 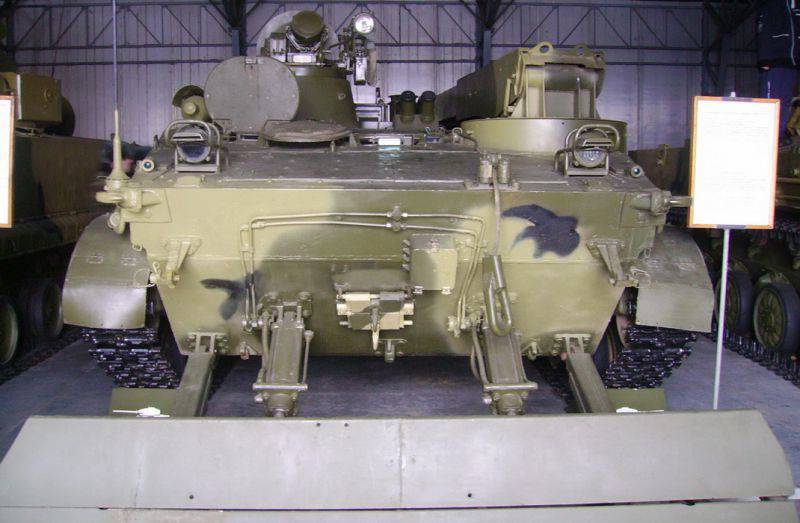 Front of the car. The share is down. Photo Russianarms.ru

On the lower frontal part of the body of the repair and recovery vehicle are mounting for movable coulter. This device has a width of 3150 mm, is equipped with hydraulic actuators and is intended for excavation or pulling stuck equipment. Clasping into the ground, the coulter holds the BREM-L in place and thus ensures the correct use of the power of the traction winch, preventing the machine from moving.

The hydraulic traction winch is located in the central part of the machine. This device is equipped with a cable with a working length of 150 m and can develop traction up to 14-16 t. With the help of blocks, guides and rollers in the frontal part of the body, the winch cable is projected forward. Fastening of a cable to the towed equipment is carried out by means of a wheel. According to some reports, the winch can be used together with a chain hoist, which increases its pulling force several times.

On the stern sheet is attached towing device, consisting of two rods with shock absorption. In the transport position, it is fastened on the stern sheet, in the working position it leans back and joins the towing hooks of the damaged equipment. Towing fixture allows BRAM-L to pull on armored vehicles weighing up to 12-15 t at speeds up to 20 km / h. The manufacturer declared the possibility of towing both by land and on water. 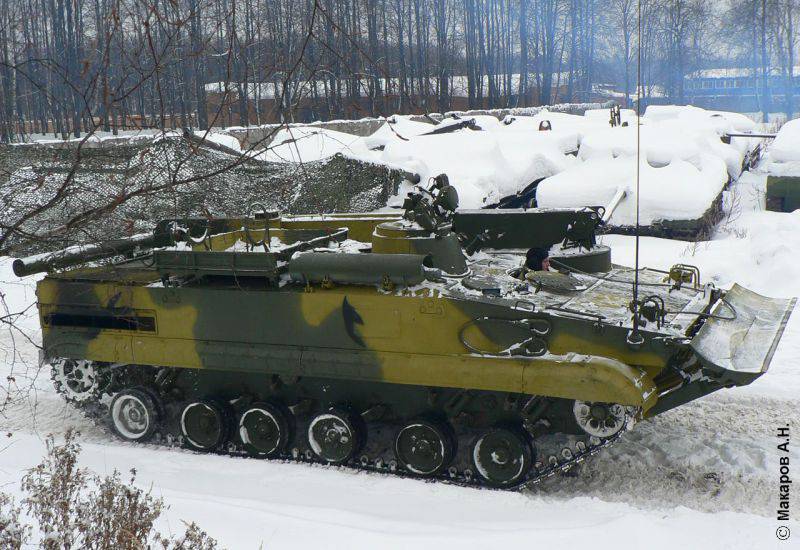 In the front of the case, on the left side, is placed the turntable of the crane installation. For lifting and moving various loads BREM-L must use a crane with hydraulic and mechanical drives. The maximum boom reach reaches 4,85 m, however, this significantly reduces the maximum lift height. Normal carrying capacity is 5 tf. When equipped with a double hoist, the crane is able to lift up to 11 tons of cargo. In the transport position, the boom of the crane fits along the body. In the working position, the boom is able to turn in any direction. The design of the crane and chassis allows the repair and recovery vehicle to move on a flat platform with a load on the hook. The characteristics of the crane allow it to be used when replacing the towers and power units of the BMP-3, as well as old machines of this class.

"Boglyanka" is based on the BMP-3 and is intended for the repair of such machines. For this reason, she received a set of special equipment and tools for the repair of infantry vehicles and equipment based on them. The machine transports electric welding machines that allow cutting and welding various metal parts. Due to the characteristics of the BMP-3 hull, the repair vehicle was able to cut and weld not only steel, but also aluminum alloys. Welding works are carried out manually.

Spare parts, tools, etc. transported both inside the armored hull and on a special cargo platform. On the roof of the hull, behind the commander's turret, a metal platform is provided with the possibility of opening the right and rear sides. When moving overland to the platform, you can place up to 1,7 tons of cargo, and on water up to 0,3 tons. In addition, on the starboard side, near the commander's tower, there is a mount for a gas cylinder used in some repair works. 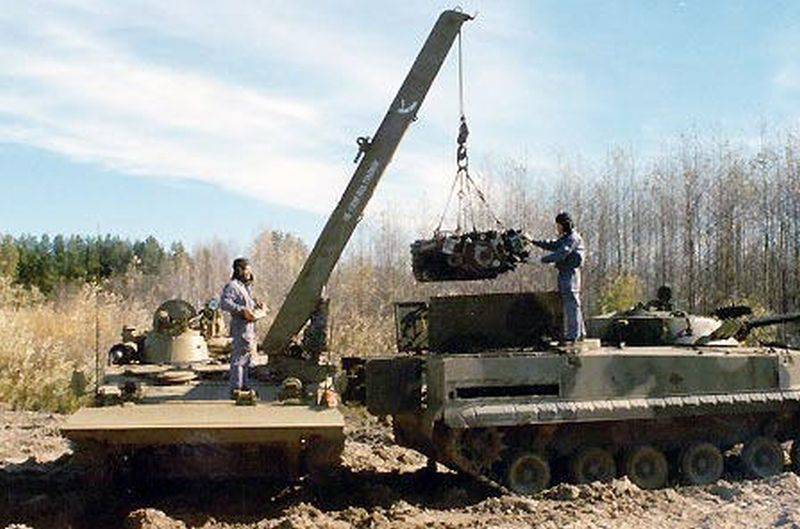 The process of replacing the silovy block on the BMP-3. Photo Kurganmash.ru

The total combat mass of the BREM-L is 18,7 t. Dimensions remained at the level of the base machine: length 7,64 m, width 3,15 m, height over the roof - 2,35 m. Maintaining dimensions and weight at the level of the base machine in combination with the “old” powerplant allowed to keep and driving characteristics. On the highway, a recovery vehicle accelerates to 70 km / h, the maximum speed in reverse reaches 20 km / h. When driving on a dirt road, the speed does not exceed 50 km / h. There is a possibility of crossing water obstacles by swimming with the help of two water cannons in the stern. In this case (without additional load) the machine can move at speeds up to 9 km / h. When driving on a highway, the range is 600 km.

The speed of movement with damaged equipment in tow depends on a variety of parameters. At the same time, the average towing speed does not exceed 20 km / h and may be limited by the state of the units of the equipment being evacuated. The speed of movement on water with a floating machine in tow is also much less than the maximum. 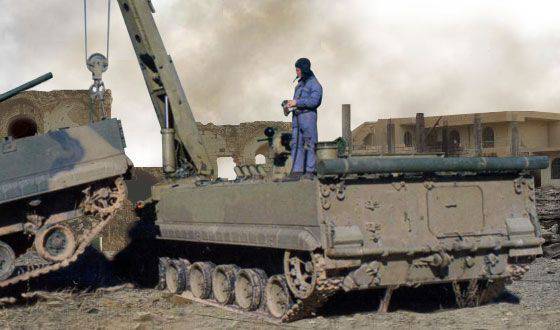 The composition of the special equipment BREM-L was determined based on the experience of the development and operation of previous domestic machines of similar purpose. Due to this, the new repair and recovery vehicle was able to perform all the tasks associated with the transportation and repair of damaged military equipment. Due to the use of some more powerful units in comparison with the BREM-2, it was possible to increase the winch pull and towing characteristics, thus providing the ability to service damaged BMP-3, which differ from the BMP-1 / 2 with other dimensions and heavy weight.

The development of the project “Runaway” started only in the late eighties, which, among other things, affected the distribution of this technology. Serial production of new repair and evacuation machines began quite late, because of what they entered service only the Russian army. Information about the presence of similar technology in other countries, formed after the collapse of the USSR, is missing. Thus, for some time the armed forces of Russia remained the only operator of the BMP-3 and the latest BREM on their base. 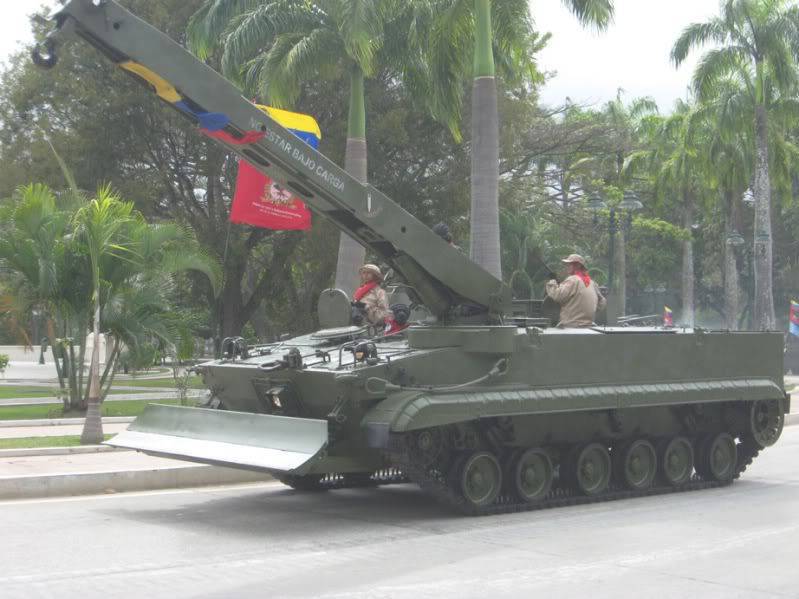 Later, several contracts were signed for the supply of this equipment to third countries, which became an addition to the orders for the BMP-3. Thus, the United Arab Emirates, owning one of the largest foreign fleets of BMP-3, in total acquired the order of 85 repair and recovery vehicles. At the beginning of this decade, a certain amount of BREM-L was delivered to Venezuela. Information about the possibility of new orders for BMP-3 and BREM-L has not yet been received.

Currently, the Russian armed forces have several hundred infantry fighting vehicles BMP-3 and other equipment on their base. In addition to the base BMP-3, the BRM-3K “Lynx” reconnaissance vehicle, the 2CXNNXX “Vienna” self-propelled artillery, the Chrysanthem-S anti-tank complex, etc. are being operated. This equipment is built on a standardized chassis and has similar characteristics, so that its maintenance can be used repair and evacuation machine "Beglyanka." Thus, BREM-L is now responsible for the full operation of a sufficiently large number of relatively old and modern military equipment. This suggests that repair vehicles of this type will continue their service in the foreseeable future, and will finish it no earlier than the last samples of equipment based on the BMP-31 will be written off. These events, for obvious reasons, do not relate to the near future.