Songs and dances for punitive as a factor of mutual responsibility 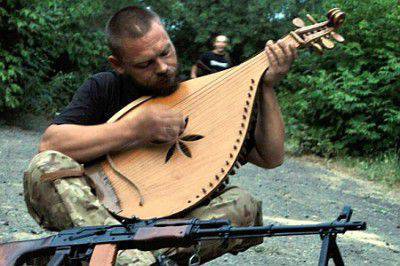 During the Second World War, the soldier und Otipiren of the army of fascist Germany not only fought, finally solved the Jewish question, burned Belarusian and Ukrainian villages, blocked Leningrad and washed boots in European rivers and seas, almost without objection, given to them by the natives.

In the intervals between battles and punitive actions, the fighters rested, and, characteristically, about the same as all people rest after a hard but important teamwork, feeling each other’s shoulder and an indescribable feeling of romantic communion with their comrades, defining any doubts and personal responsibility everyone.

Having sent a couple of thousands of Jews to the holes and trenches, having burned and buried subhumans like Slavs and Gypsies alive, the brave warriors sang sang folk songs, swayed the music to the beat, played the harmonica and even the violin, and then went to write letters with their Lizhen and Gretchen, not forgetting to carefully report how hilariously screaming in the sheds of the Schweine burned by Russian soldiers — with the indispensable attachment of photos of executions.

And the respectable German Frau, having received evidence of honest service to the homeland of their husbands / fathers / sons, showed off to each other their feats.

Were these people totally sadists? Not. They were hot patriots, fervently loved the Fuhrer and the family, and in their leisure hours they composed touching songs about the front-line fraternity and were touched by the children's drawings sent to them.

After the war, however, many found it best to burn those very pictures and forget the romantic songs, and, if possible, less often to mention the fighting brotherhood of the brave half-world conquerors. Some were afraid of retribution, but many saw the sight and were horrified. Notice that it was not a civil war, the Germans killed strangers, and yet many after the war experienced in their souls a real hell of indelible heavy guilt.

Today’s Ukrainian punishers in the Donbass also made up a lot of tearful and pathetic songs depicting deprivation and heroism in the war. They are chanted by the fighters of the Armed Forces of Ukraine and especially carbates free from punitive operations, as well as Ukrainian citizens and light-faced handshakes from the neighboring country and even representatives of the fraternal Baltic states during their tours. Singers mouth, especially from among those who do not want to personally feel all the romance of battle, strenuously composed, arranged and labored their ATO-works, attracting for this choir, jazz, pop, rap, beat, rock. But above all - tearful bard chords.

Here is how Ukrainian media write, a nagging song about the ATO and how the whole world will be spivat “Glory to Ukraine!”. “33 Muscovites came to visit, instead of harvesting we collect their bones in the field,” the song begins with these words. The authors of the composition are sure that “we’ll live well without damned Muscovites”, and the order in Ukraine can be put in place “even without Bandera”, because there are planes for this, Tanks, Armored personnel carriers. The song speaks of both “cargo 200” and tires, “so that Moscow burns”.

It is noteworthy that the dueling song is performed by a mixed-sex duet. In general, girls in the past two years have manifested themselves at an incredible high moral level. Compassionate mothers, beregineas, good sisters, loving daughters — their joyful cries about the burning of people in Odessa, the killing of children in the Donbas, their gambling sadism, artsy, inventive, sophisticated-bloody, light-hearted, beat boring male comments. The girls poured Molotov in Odessa, threw cobblestones at the Golden Eagle, incited men to be even tougher, angrier, shoot, flay, hang. Anka, Anka, naive romantic fool, did you know what they would be like, these new fighting friends ...

About the front-line brotherhood of the murderers of Donbass children and women, marauders, rapists, sadists are folded and ballads continue to be composed not only by the fighters themselves. Their exploits are readily painted by pupils of kindergartens, schoolchildren, members of circles and sections, cultural and national communities. Racing, afraid to be in the tail, late with an expression of loyal delight. Paphos, molasses, hate. Pledging smears like soot ...

“We, the young, were taught this way, you see? - Everyone was taught. But why did you turn out to be the first student, brute? .. ”.

It has become a tradition to invite a couple of ATO veterans to school hours to teach children to love their homeland. The little one, in turn, listens to front-line bikes - without fail of a heroic pompous character - opening their mouths and gradually learning to think that it is possible to disgrace anyone whom the motherland tells them to dishearten, and then crush like a bug, not knowing doubts and moral sufferings. Even if this former person speaks the same language with you and belongs to the same people as you. So children make accomplices of common guilt.

And so that the children did not ask superfluous questions, the priests are attached to the matter. UOC KP, if anyone doubted

Charity, please note, and social service. The children sang to the participants of the hostilities, during which their peers, several touching songs, were also killed, recited mimic-virshik's heels, than they beat a mean male tear from the stern warriors and confirmed that their beautiful and selfless service was kind finds response in young hearts. In addition, the kids showed to the touched veterans of the civil war a performance on mutual assistance called “Teremok”.

“We hope that at least for some time the children were able to give the soldiers the warmth of their home, where they love and look forward to,” the press service of the Zaporizhzhya diocese of the Ukrainian Orthodox Church said.

It is unlikely that the rehabilitated fighters told the children how, during the shelling of Gorlovka and Happiness, Debaltseve and Luganskaya stanitsa infants and mothers died, how the punishers made sours in the trenches all day, how they removed worn doors from loops and pulled washing machines with hoses to send modest gifts relatives And not necessarily in Stryi or Ternopil, it is quite possible that in Zaporozhye.

But, as cinema Muller used to say, the legend needs to be fed up, so events of this kind tirelessly and regularly produce schools and vocational schools, children's homes and technical schools, raising and increasing the degree of non-condemning herd glee, and we are always informed about the high patriotic spirit of the performers and the touch of the squelching noses of the harsh -viewers.

And in Konotop museum of local lore them. O. Lazarevsky went even further. There they presented a poetry collection “Koliskov for Yangol” (“Lullaby for Angel”). The book includes poems by local poets devoted to events in Ukraine, as well as drawings and letters of children - students of Konotop schools. The book, we are told by the media, is designed to raise the fighting and morale of the Ukrainian fighters who are in the ATO zone, although the authors have no doubt that the fighting spirit touches the stratosphere as well.

In general, as always - songs, poems, drawings, and most importantly - the desire of God's blessing. God’s blessing to the soldiers of the civil war.

The collection was sent in parts involved in the ATO - the soldiers must understand that the children affectionately welcome the deeds of their heroic fathers.

Well, and, of course, in school libraries. Myths should be created, pupated, cast in bronze, soldered to consciousness. They must become the basis of national identity, a basis for pride and an example for future generations. After all, if the frog is properly sprinkled with sugar, some agree to eat it and ask for supplements.

And in Kharkov, the tragic fate of the Jewish people was staged, songs of famous Soviet bards were used in it, and the first thing they showed at the House of Officers for National Guard soldiers, Ukrainian Armed Forces and volunteers, and only December 15 will be presented in the Jewish Cultural Center for everyone in Kharkov. I eagerly want to know whether Jewish well-wishers sent individual personal invitations to commanders of the carbates, famous for their national tolerance.

The Jewish community of Kiev, by the way, sent out an invitation to their members to receive pereymenuvannya Kiev streets and squares as part of decommunization. I suspect that the leaders of the community have never heard about the exploits, for example, Petliura, about the participants of the Lviv pogrom, about who with feverish enthusiasm and initiative embodied the final solution of the Jewish question in Ukraine.

But we are punitive musical and dramatic performance on the Ukrainian Move, perhaps, be counted. And most importantly - get to get no later than others.

It will not be counted. Neither you, nor the frightened aunts with challahs from the district, who hasten to provide extreme approval for the punitive operation in the Southeast, nor to the cowardly, but pragmatic officials in the district administration headquarters, who subordinate to the expression of hysterical patriotism. Each of you will sooner or later stumble and will be declared an enemy and agents of the Kremlin, remember my words.

... After the war, the Germans were forced to watch documentaries about the atrocities of the Nazis. I believe that this was not a revelation for everyone - photos of the family's fater against the background of the hanged, shot, burned, I repeat, many received. But, one way or another, from the heart or force, honestly or falsely, who how - the Germans repented.

However, the probability of insight and remorse of the Ukrainian warriors, alas, does not seem to me convincingly high even in the distant future. In the era of the Internet and social networks, there is no guilt, no meanness, no sadism, which would not find the hot support and justification among Shirnarmass.

And your kids - what do they play in the schoolyard, what verses do they compose, what songs do they sing?

Ctrl Enter
Noticed oshЫbku Highlight text and press. Ctrl + Enter
We are
How can Russia survive and win in the 21st century?Do not chop off the roots of Russian culture
Military Reviewin Yandex News
Military Reviewin Google News
44 comments
Information
Dear reader, to leave comments on the publication, you must to register.