December 11 2015
182
Russian President Vladimir Putin said during his speech that Russia's actions in Syria were dictated not by the geopolitical interests of the Russian Federation and the desire to test new weapons, but by a threat to the country's security from international terrorism and, in particular, from the militants of the DAISH (ISIL) group. At the same time, the president said that the operation would continue, and that any attempt to encroach on Russian military facilities in Syria would be assessed as a threat to the Russian military.


RIA News quotes a presidential statement:
I want to warn those who will again try to organize any provocations against our servicemen. We have already taken additional measures to ensure the safety of Russian military personnel and the air base (in Syria). It is reinforced by new air links and air defense systems. I order to act extremely harshly, any goals that threaten the Russian grouping or our ground infrastructure are subject to immediate destruction.

This was stated by Vladimir Putin during the meeting of the expanded board of the Ministry of Defense. 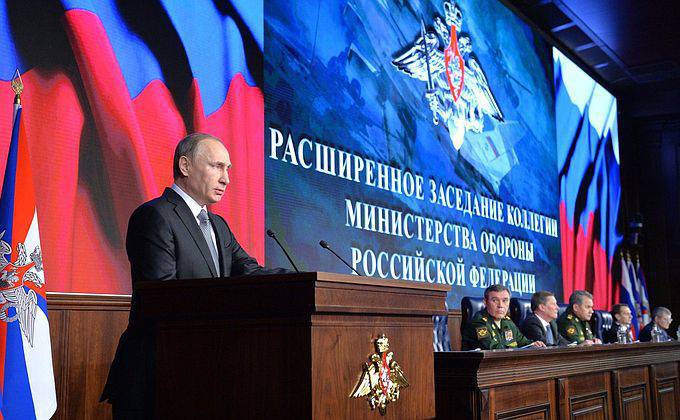 At the same time, Russian Defense Minister Sergei Shoigu reports that a tank repair plant has been restored in the Syrian city of Homs. It is noted that the Russian Aerospace Force of the Russian Federation transferred to Syria over 214 thousands of tons of various cargoes to fully support the operation against international terrorists.

Ctrl Enter
Noticed oshЫbku Highlight text and press. Ctrl + Enter
We are
Results of the week. "Whose will you be?" Whose serf, I ask? "
182 comments
Information
Dear reader, to leave comments on the publication, you must to register.