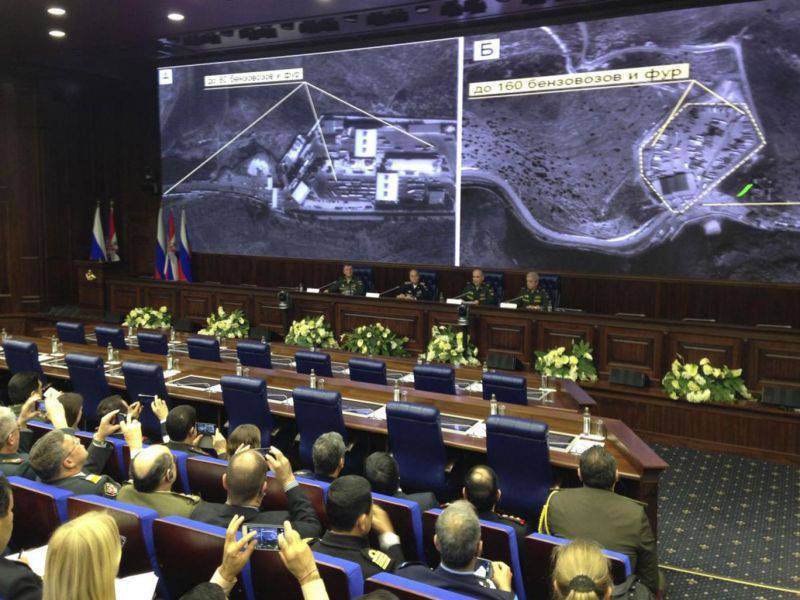 This news circled the whole world. After Turkey destroyed the Russian aircraft, Moscow responded by disclosing the role of Ankara in laundering Syrian oil smuggled by the IG. Satellite images provided by the Russian side demonstrate columns of fuel tankers going to the Turkish border. This traffic, which is believed in The Financial Times, brings the Islamists more than a million dollars a day, was actively discussed in the international press, but caused only an awkward silence in France.

Much has been written about the Russian revelations in the international press, which has devoted to this information large articles with maps and satellite photos. We offer you a few passages:

"Representatives of the Ministry of Defense of Russia announced satellite images with columns of gasoline tank trucks, which are supposed to transport oil from the IG oil production installations in Syria across the Turkish border" (The Independent).

“Russia accuses Erdogan of oil deals with IG. Deputy Defense Minister Anatoly Antonov said that Turkey is the main buyer of the oil stolen from Syria and Iraq ”(Air Force).

"Russia has accused the family of the Turkish president of involvement in the illegal trade in oil with the IG, which brings the terrorists millions of dollars" (The Daily Mail).

"The Russian military unveiled satellite imagery, which, according to them, depicts columns of tank trucks carrying oil from IG facilities in Syria and Iraq across the Turkish border" (NBC News).

"Turkish President Recep Tayyip Erdogan and his family are directly involved in the illegal oil trade with the Islamic state, said Deputy Defense Minister Anatoly Antonov. (...) From the beginning of the intervention, the Russian aviation destroyed 32 oil complexes, 11 refineries, 23 wells and 1080 fuel trucks, he listed, showing maps in a huge hall, where more than 300 journalists gathered. According to him, thanks to these blows, Moscow managed to halve the annual turnover of the IG oil sector: from $ 3 billion to 1,5 billion ”(Le Temps). 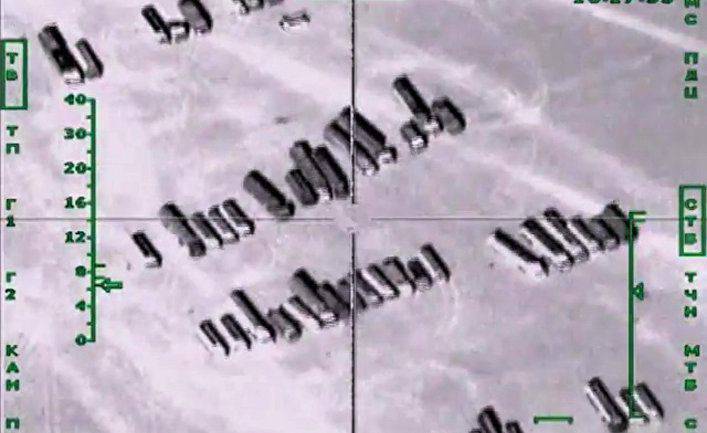 However, this information wave did not affect one country. This is about France. A quick search in the French press speaks of an extremely small number of articles on this topic and even the availability of materials that are trying to launch a counter.

France Info's bad faith (this is when the organization is owned by merchants weapons) is very revealing. The article entitled “IG oil causes tension between Turkey and Russia” actually puts the criminal and his whistleblower on the same level. In the subtitle, the reader is immediately notified that "Washington, for its part, categorically denies the claims of Russia." In other words, there is no reason to believe Moscow. France Info further notes that “on Wednesday, Russia switched to personal attacks on the Turkish president.” That is, he is certainly innocent, and all this can only be "personal attacks." Finally, in the middle of the article, after a heap of various pirouettes, France Info reports the essence of the news: “Turkey is the main consumer of this oil stolen from the legitimate owners of Syria and Iraq,” Russian Deputy Defense Minister Anatoly Antonov told a group of several hundred journalists on Wednesday. In other words, if the Anglo-Saxon (and Swiss) press publishes detailed articles with photos and maps, France Info reduces Russian disclosures to just one phrase. Show less enthusiasm, probably not at all possible.

Le Figaro, in turn, issued only a brief note, which does not contain Russian information, but Washington’s denials: “Today, the United States has categorically denied the accusations of Moscow.” Etc. etc. Because Turkey is innocent (although it shot down a Russian plane in violation of international laws and regulations, despite the fact that it stayed in its territory for only 17 seconds) ...

The participation of France in the war against Syria perfectly explains the confusion of our media. Turkey’s operational role in supporting the Syrian uprising is too well known to in any reasonable way deny its cooperation with the IG on oil. Russia is now trying to cut the umbilical cord.

To deceive the masses, to calm the elite

The major press (including in France) mostly wrote about the support of the North Atlantic Alliance and its allies (Qatar, Saudi Arabia, etc.) of the Syrian insurgents in general and the Islamists in particular (they play the leading role in the armed uprising) . Therefore, the French discrepancies noted by us will be only temporary. Some will rejoice over this, the courage of journalists, the way the press, even in the current tense time, lets the studs of political and military power, or even puts its actions into question. But by doing so, they only sign in their naivety.

The audience of the major press is the highest socio-professional circles. This message is addressed to them: “No, the West is not going to retreat under the pressure of the Muslim world. On the contrary, we attack it. We keep events under control. You need to continue to invest money, because if we win, our arms, construction and energy corporations will receive a considerable profit. As you can see, your investment is in good hands. ” Indeed, mass media, that is, radio and, above all, television, draw to the audience a world in which there is only good and bad. To deceive the masses (in order to make them obedient) and calm the elite - this glass ceiling cannot be broken through.

Ctrl Enter
Noticed oshЫbku Highlight text and press. Ctrl + Enter
We are
NATO exercises: Do not climb a bear with a pen knife. (Agora Vox, France)US Failures in Central Asia (Agora Vox, France)
71 comment
Information
Dear reader, to leave comments on the publication, you must to register.