December 14 2015
91
Not only in Ukraine, in Syria, but also in Turkey, and indeed everywhere where Moscow has its interests, Vladimir Putin uses the strategy of “quickly striking a blow,” some Western experts say. As part of this strategy, Syria has become for Putin a “testing ground” for practicing the actions of military forces and a place for running in “new toys”. 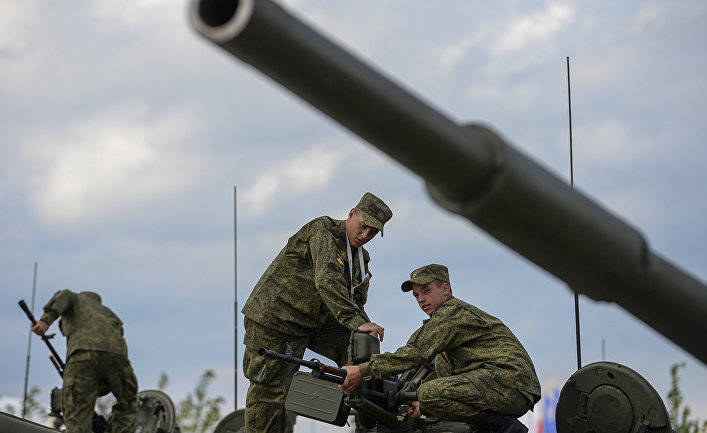 The article "Putin seeks to win," dedicated to the "roots of Putinism" and published "News1" (Israel; translation source - "InoSMI"), Ph.D. Uri Milstein notes that Putin’s strategy in Ukraine, Syria, Turkey, and everywhere where only Russia has interests that require the use of force, comes down to “quickly striking to solve the case”.

According to the expert, the roots of such a strategy “go back to the failure of Stalin’s political step, which concluded an agreement with Hitler, as a result of which the USSR almost ceased to exist”. In addition, the strategy of the President of Russia was the result of numerous military invasions that this country knew.

In 1941, the Russians made one conclusion: one cannot rely on diplomatic agreements like the Molotov-Ribbentrop Pact. And another conclusion: you should not count on a large and well-equipped army if it does not act as expected.

“In order for Russia to continue to exist, it is not enough to have a large army armed with the latest technology. It is necessary to openly use the army for a decisive victory, if a threat arises to Russia's vital interests. Therefore, it is not only President Putin. Such is the Russian military culture. ”

The United States behaves differently because of its stories. They prefer political action to war. If war cannot be avoided, then “it is better to entrust this work to others and support them.”

1. The US military doctrine is falling apart; All US military operations after the collapse of the Soviet Union failed.

2. The military doctrine of the Russian Federation, on the contrary, is developing. Putin’s military operations are effective.

Reed standish in "Foreign Policy" writes that Russia uses Syria as a testing ground for the army, and at the same time as an excuse to try out “new toys”. The catalyst for such initiatives was a short war with Georgia at the time, the author recalls. In the Kremlin in 2008, “victorious moods” took place, as Georgian forces were quickly defeated. True, the campaign turned out to be chaotic and bloody, and the land and air forces of the Russian Federation showed themselves “not in the best way”, the analyst is sure. Dumas about this led Vladimir Putin to the idea of ​​the need to launch a program to reduce excessive levels of armed forces and to replace old types of weapons with new ones.

And Putin realized this idea: the war in the air, which Moscow is waging against terrorists in Syria, is demonstrating the fruits of army reforms. The observer recalls that this week the Russians managed to hit targets near Raqqa (the “capital” of the IG militants) with cruise missiles launched from a subtle submarine in the Mediterranean. The Russians achieved another goal: by intensifying the airstrikes, they helped the Syrian special forces get the “black box” from that bomber that the Turkish air force was shot down last month.

The journalist is convinced that all this demonstration of power speaks of the readiness of the Kremlin to continue “to play with muscles”. Putin is using a campaign in Syria to test new types of weapons and equipment. So Moscow gives a warning to the West: they say that we, the Russians, have restored military power.

A senior naval analyst at the Institute for the Study of War, Chris Harmer, told the correspondent in a commentary: “The missiles launched from the submarine were, I think, political weapons, whose strike was intended for Washington, and not at all by military weapons directed against IG. According to the expert, the Russians simply did not have “tactical reasons” for the use of such weapons.

According to Mark Galeotti, a professor at New York University, Russia in Syria "is experiencing new technologies and new ways of applying old technologies." And he is engaged in a kind of advertising: shows “potential customers” what things Russian weapons are capable of doing.

Reed Standish writes that Putin at the same time "flaunts" publicly, hinting at even the possibility of using nuclear weapons against the terrorists of the "IS". True, the President of the Russian Federation immediately made a reservation, noting that, as he hoped, nuclear weapons "would never be needed."

What are the plans of Moscow? According to the modernization plan of the armed forces launched by V. V. Putin in 2010, the country provides for the replacement of 70% of Soviet-made military equipment (by 2020), receiving Navy fifty new ships, Air Force - hundreds of aircraft and ground forces - thousands of new cars. On the other hand, for such major transformations, money is required, and the Russian economy is actually sinking - it is being reinforced by Western sanctions and rolling down prices for crude oil. Putin cherished his projects in those days when the price of black gold was much higher than the current ones. Now, Putin’s military budget reduction is inevitable. The mentioned Galeotti, for example, says that economic difficulties will affect at least the pace of defense modernization. He argues that Russians are already reducing their projects today.

Yet the Kremlin’s strategy has proven its effectiveness in Syria. Mr. Galeotti objectively points out that Moscow simply by launching an operation in Syria “frustrated much of the foreign policy plans of the United States”. And Putin needed for this to use only three dozen aircraft.

Thus, we will add in conclusion that Western experts clearly do not advise the White House and the entire West to underestimate the Kremlin’s strategy and the speed and surprise of Putin’s decisions. Cheek brings success!

Observed and commented on Oleg Chuvakin
- especially for topwar.ru
Ctrl Enter
Noticed oshЫbku Highlight text and press. Ctrl + Enter
We are
Situational analysis of the death of the MH17 flight (Malaysian Boeing 777), made on the basis of engineering analysis from 15.08.2014Syria: Americans scare themselves, and Asma Asad buys chairs
91 comment
Information
Dear reader, to leave comments on the publication, you must to register.