Ocean B-2. First steps of Zamvolta 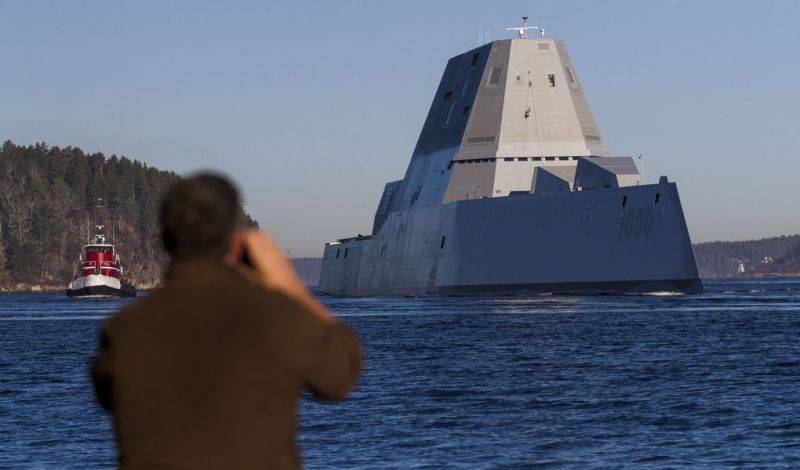 From the bridge, commanding “Full speed ahead!”, The mechanic standing on the lower deck increases the speed of the turbine. Where to go? Which enemy? He still does not see anything except the steering wheel control steam. Most of the team members are silent cogs in the system, their participation in the battle is limited to the transfer of commands from the bridge to the machines and mechanisms. And then what?

“After 54 minutes of battle on the cruiser, a battle exploded, and he died along with the entire command: 919 man.”

Why risk life? Is it possible to transfer many functions to automation, leaving people with only the most important tasks of controlling the ship and selecting targets in battle?

So argued at the beginning of the last century, but then it seemed an impossible dream. Today it is becoming a reality. The crew of the largest and most modern destroyer in the world has been reduced by three times compared with the crews of ships of a similar class of the Cold War era.

A team of 15 people is enough to control the 140 thousand ton "destroyer" with powerful and diverse weapons. (according to other data, 180).

The breakthrough is associated with the integrated automation of the tasks of collecting and processing tactical information, combat maneuvering, reproducing the external environment, weapons, navigation, remote control of technical means and movement. The second critical point is the increase in the turnaround time of all mechanisms, systems and equipment. The crew of “Zamvolta” is free from the need for repairs in the open sea. No workshops, teams of masters and electricians. All maintenance will be performed only in the database - before and after the end of the hike. Finally, another serious point that nobody paid attention to before was the automation of loading processes of ammunition, food, spare parts and consumables in preparation for the march.

The race to reduce the crew has its negative side. Will the Zamvolta crew be able to organize a struggle for survivability in case of an emergency situation on board? Who will eliminate the consequences of the accident if, even without that, a small team, suddenly lose part of their sailors?

And once again comes to the aid of complex automation destroyer. Automatic survival control systems with monitoring of the situation in each of the compartments (water and smoke sensors, video cameras). Capable of automatically locking hatches and doors, preventing the spread of water and fire. Include fire extinguishing systems and start pumps for pumping water.

But what if the damage is too great? Will Zamvolt be able to return to the base on their own, as did the heavily damaged New Orleans and the German LCR “Seidlitz”? Where the mechanics died, standing up to the waist in boiling water, ensuring the work of the turbines. And the crew who did not sleep for four days struggled with the flow of water.

All the hope of the creators of Zamvolta is the SAFFiR complex (Shipboard Autonomous Firefighting Robot) and similar systems. In the summer of 2014, the robot successfully coped with a test arson aboard the landing ship Shadwell. With the growth of 177 cm and weight 65 kg SAFFiR had enough strength and intelligence to haul the fire hose, to overcome the debris and open the doors. In addition to the smoke detector, the android is equipped with infrared stereo sensors and a rotating laser range finder (lidar), which detects light sources. Thanks to this, the machine can move even in smoke-filled rooms, and the stabilization system allows it to maintain balance even with heavy rolling. The “humanlike” form of the android is a consequence of the working conditions. Tracked platform is not optimal when moving along steep ladders and narrow passages inside the ship.

“Nose in the wave”? .. Contrary to doubts skeptics, “Zamvolt” is designed to pass through the water walls, cutting them with his sharp inclined stem. As a result:

a) parasitic pitching disappears;
b) speed increases and improved seaworthiness;
c) the range of restrictions on the use of weapons in a storm is reduced;
d) profitability increases - it is easier to pass through the wave than to climb it every time.

In terms of seaworthiness, Zamvolt is an ideal ship.

Why so smart? Why such a good and obvious solution has not yet been applied to other ships?

Ships of past generations have traditionally had a direct or impending stem and camber. Due to this, their decks are less flooded with water, allowing brave sailors to be on the upper deck and look at the sights of guns. 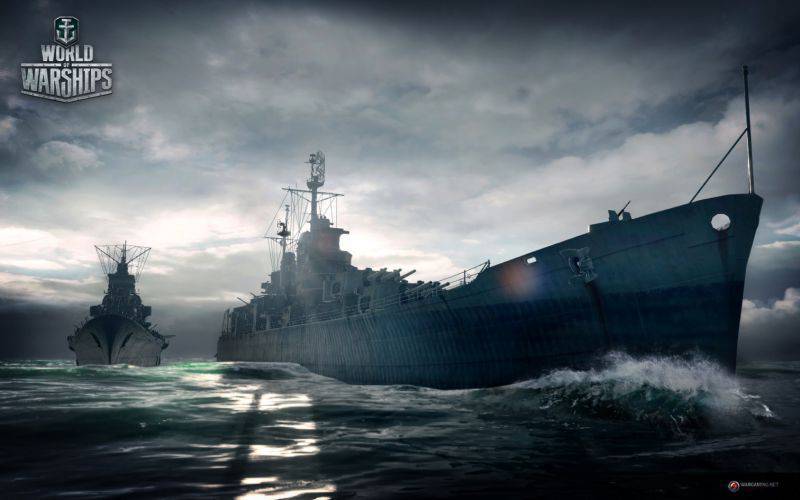 Zamvolt does not have this problem: the deck is completely empty, there is even no fencing in the bow section. Only hermetic UVP covers and folding automatic 155 guns. All radar antenna posts and fire controls are mounted on top of the superstructure, as high as an 9-storey building. 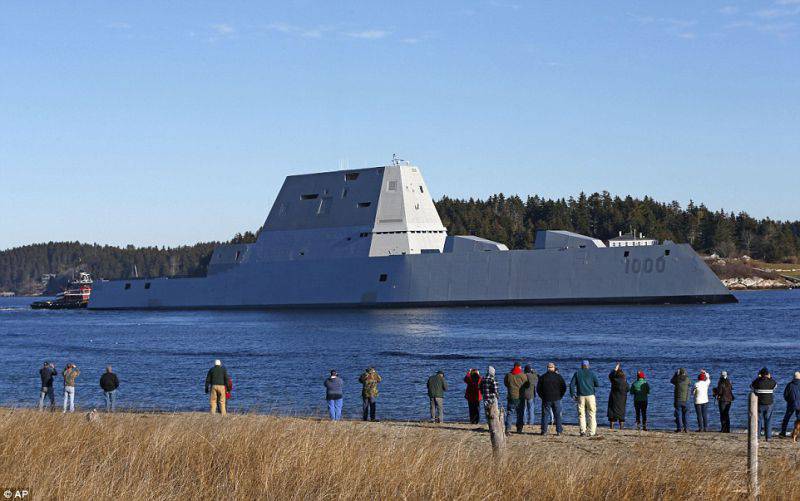 Hippo sees poorly, but this is not his problem (s). Show a wave that can overwhelm an 180-meter ship with an 15 flange height. And even if the small 300-ton destroyers of the Russian-Japanese war could bypass the globe without losses, what to expect from the 15-thousand. ton leviathan?

Approximately from the same series doubts about the insufficient stability of “Zamvolt”.

V-shape of the underwater part of the hull corresponds to ordinary ships. At the same time, the ᴧ-shape of the surface part and the superstructure does not violate the stability of the destroyer. Due to its pyramidal shape and littered sides, the Zamvolta structure is maximally concentrated around the center of mass, which, in turn, only increases its stability.

Turbo-electric transmission was used at the beginning of the last century on many types of military and civilian ships, incl. aircraft carrier “Lexington” and battleships of the type “Colorado”. It eliminates the need for complex and noisy gearboxes (GTZA), simultaneously contributing to an increase in efficiency. And, at the same time, increasing the cost of the entire system.

Conceptually, the Zamvolta transmission is not new, but impressive in terms of its technical performance.

The most powerful shipboard GTE Rolls-Royce MT-30 (up to 40 MW). Each of the two turbines “Zamvolta” produces twice as much power as the entire power plant of the battleship “Colorado”!

But the main feature of the power plant is its full integration into the destroyer power supply system. This allows for a few moments to redirect up to 80% of the generated power to one specific consumer (for example, railgun).

Characteristic obstruction of the sides (reflection of radio waves upwards, into the void), a continuous superstructure “from side to side”, empty deck with a minimum number of radio contrast elements. All of the above elements of reducing visibility are already 20 years used in shipbuilding. 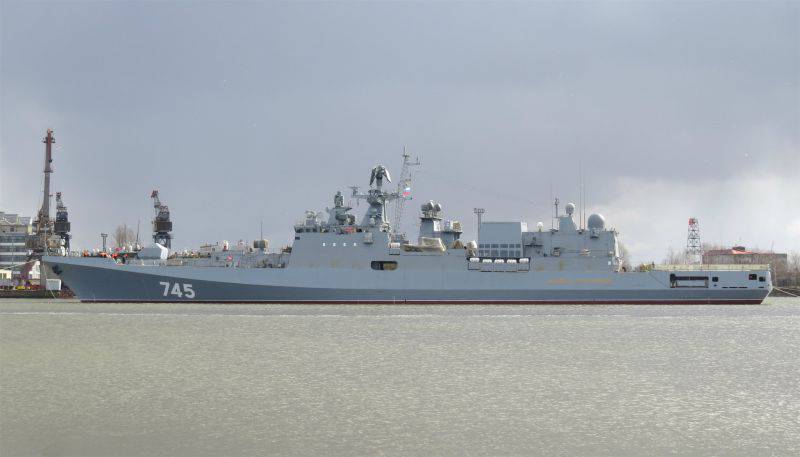 The only thing that distinguishes the “Zamvolt” - in its design techniques for reducing visibility reached its apogee. How does this affect his combat capabilities. At a minimum, does not make the destroyer weaker. Ideally, it will make it difficult to capture homing missiles, especially in conditions of strong excitement.

How does this affect seaworthiness? The answer is no way. Details in the previous chapter.

Radiolocation - the main method of detection in modern warfare. Nevertheless, the creators of “Zamvolta” took care of reducing the visibility of the ship in other ranges.

Optical: shapes of the contours in the underwater part of the hull, together with the long-used MASKER system (supply of air bubbles to the screws and the underwater part of the hull). The creators of “Zamvolta” promise that the destroyer will have a short and weakly pronounced wake trail - the main unmasking element when ships are detected from space.

The 155 shot of mm of the Zamvolt is twice as heavy as the shells of the usual six-inch (102 vs. 55 kg). Due to its unique abilities, a guided munition with a bottom gas generator can be considered the equivalent of a Caliber / Tomahawk cruise missile.

The “Caliber” data is classified, while the “Tomahawk” is equipped with an 340-kg warhead. Despite the threefold difference in the mass of the warhead and 10 times shorter range, 155 mm LRLAP projectile, in some situations, can be a direct replacement for SLCM. 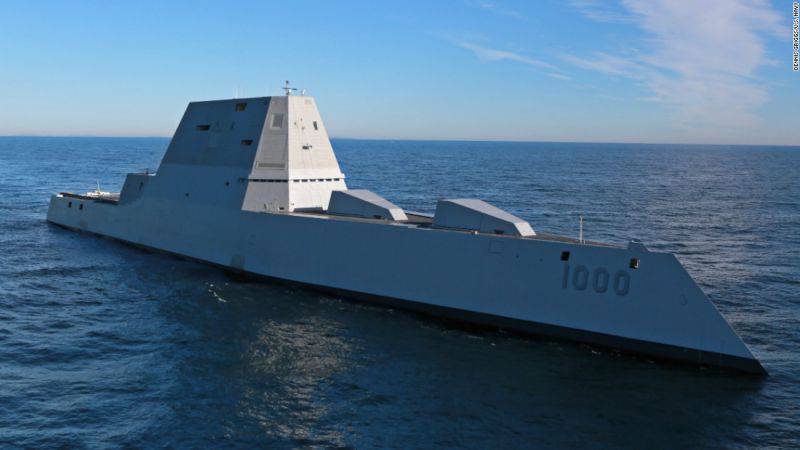 First, art. The projectile has its strengths: minimum reaction time and high flight speed (2,5 sound speed versus subsonic rocket). Small size and high speed make the projectile unresponsive to enemy air defense systems. Also, the shells can fly under any visibility and weather conditions. At the same time, even the most high-tech LRLAP costs less than a cruise missile at 10. Savings and efficiency.

Rate of fire. Even a whole mix of Aegis destroyers will not be able to launch “Tomahawks” with the pace of 20 rockets per minute. A gun "Zamvolta" can.

And, of course, ammunition - 900 shots. 10 times more than the number of cruise missiles on board any cruiser or destroyer. And for a snack - another 80 rocket launchers.

Fighting near the coast does not require very large ranges. A third of the world's population lives in a coastal strip 50 km wide. More than half of megacities of the whole world are concentrated on the coast: Istanbul, New York, Shanghai, Rio de Janeiro, Tokyo ...

While it is more than enough the power of 102-kg art. To defeat a wide range of sea and land targets. shells.

In existing realities, if the Yankees have fleet out of 60 missile destroyers, the appearance of 2-3 “Zamvolty” weather will not do. The missile and artillery destroyer can be seen as a technology demonstrator.

And yet, with all the evidence of the situation, it would be too naive to consider the Zamvolts to be peaceful floating laboratories. When compared under the conditions of a “spherical vacuum,” such a destroyer alone is stronger than most fleets in the world.

It remains to add that 7 December 2015, the lead destroyer of the USS Zumwalt entered sea trials in the Atlantic Ocean. 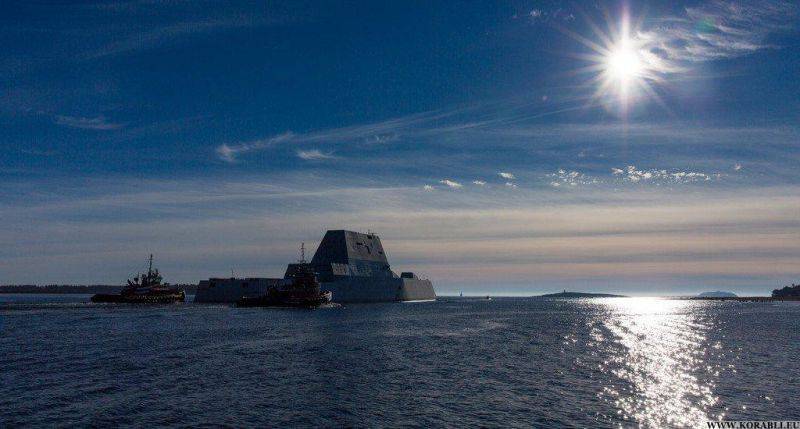 Ctrl Enter
Noticed oshЫbku Highlight text and press. Ctrl + Enter
We are
China is building the second largest destroyer after ZamvoltaClash of the Titans. "Gerald Ford" against "Zamvolta"
Military Reviewin Yandex News
Military Reviewin Google News
256 comments
Information
Dear reader, to leave comments on the publication, you must to register.