Three Asad. Why is continuity so important in Syrian politics?

December 13 2015
26
Assad is Arabic for Leo. And this is symbolic, since the elder Assad, Hafez, the founder of a peculiar dynasty of Syrian presidents, for decades has established himself not only in the perception of the Syrians, not only in the Middle East, but also in the eyes of the whole world as a majestic and wise ruler. 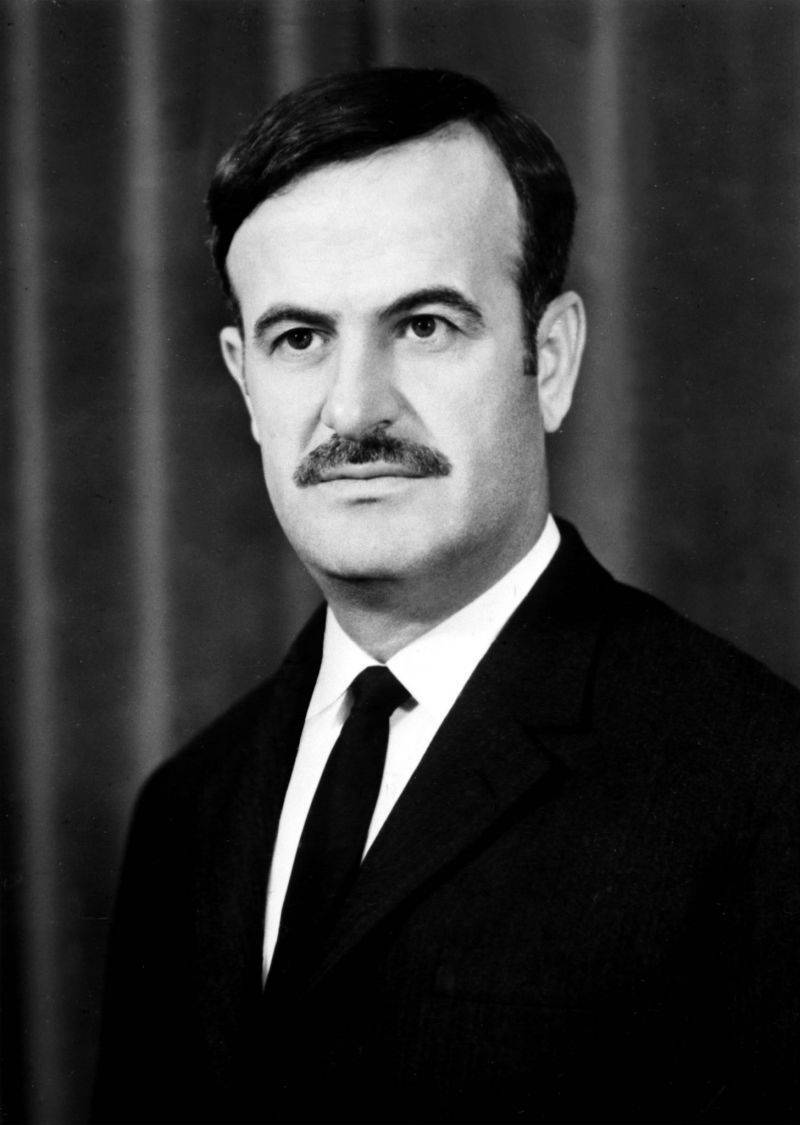 Hafez Asad. TASS photo chronicle
In the best Eastern style, he skillfully, like few in the world, maneuvered between two opposing superpowers - the USSR and the USA, between socialism, which Syria declared a state doctrine, and a flexible attitude towards small and medium-sized national capital. Syria Asadov least of all resembles a concentration camp. At the same time, it must be said that even he underestimated the depths of the duplicity of the "civilized West", did not recognize it in all its glory. This was inherited by his son and successor Bashar.

Where does such complacency come from? Perhaps its origins are that the elder Assad for many years was reliably covered from outside encroachment by the powerful Soviet Union. Hence his rather tough and irreconcilable, much more irreconcilable than the policy of radical Islamists than Bashar al-Assad.

How can one not recall the forceful suppression of the armed uprising of the Muslim Brotherhood in the city of Hama in 1982 - by order of Hafez al-Assad. Then, not only the Syrian special services, but also the armed forces up to heavy artillery and were thrown to suppress the armed rebellion tanks. Killed, according to perhaps overstated estimates, more than ten thousand people. But in the world these events did not receive wide publicity precisely because the Assad regime was under the nuclear-political umbrella of the USSR.

Then it worked. However, the fact of the rebellion suggests that the roots of the current religious conflict in Syria are quite deep.

Since the post-war period, and especially since the Assad clan came to power in Aria, the Alawites have been continuously reigning. This is a small sect within the framework of the Shiite trend of Islam with a strictly closed esoteric religious platform (some researchers even dispute the Shiite identity of the Alawites) and the way of life that was initially isolated from the whole world, mainly in the mountain villages of southwestern Syria. About the Alawite almost nothing was known until the rise of Assad. The very same elevation occurred in a truly miraculous way.

In this set of circumstances one can see the highest meaning. After World War II, the French colonial administration of the time of the mandate over Syria, in preparation for granting independence to this ancient country, began to form national armed forces. However, the local Sunni elite, representing the overwhelming majority of the country's population, considered service in the army unworthy of their sons and bought off from it. The first military schools were mainly formed at the expense of immigrants from the backward strata of the population, including the Alawites. 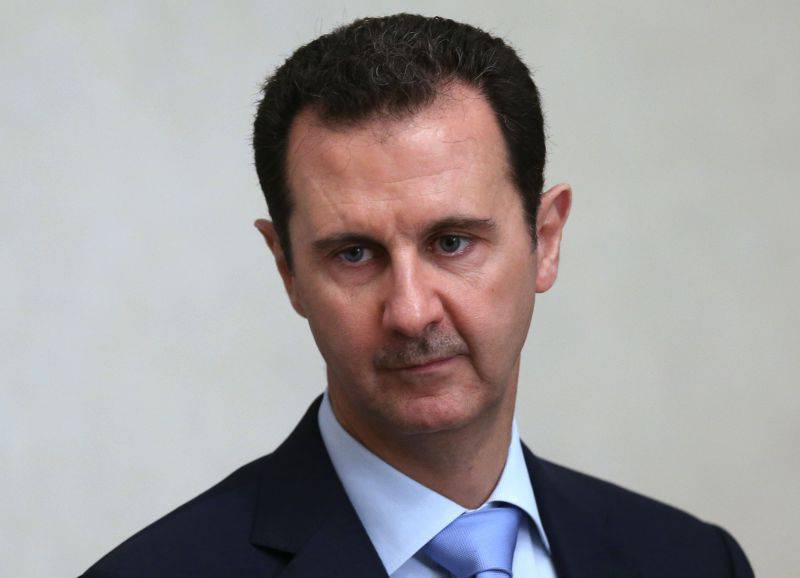 Bashar Assad - the successor of the policy of his father. Photo by Valery Sharifulin - TASS
So, Hafez Asad himself, who turned out to be among the future officers, practically could not read and write ... But he managed to quickly advance without patronage, without clan support. He graduated from the College of the Air Force, and then got into the USSR for military training and studies. He visited Moscow, Kiev, served in Kyrgyzstan. The Soviet army made a strong impression on the young Syrian. Respect for our country, he will save for life.

Then, when in the 1960-s not only in Syria, but also in other Arab countries, a wave of coups took place, young officers, armed with an attractive ideology of the Arab socialist revival, quite naturally came to power. Assad joined the Ba'ath Party as an unenlightened teenager, and by the 1960 years, his position was strengthened. After one coup, Assad led the Air Force and then all the armed forces of Syria, and after the second, in 1970, he became the prime minister of Syria. Soon he was elected president, although the elections were for the most part a decorative act. The power of Asad held tight. A series of coups in Syria ended.

Characteristically, the Ba'ath Party seized power not only in Syria, but also in Iraq. Having come to power, the Syrian Alawites, naturally, were forced to form the structure of the regime, given that they constituted a tiny minority (less than half a percent) of the total population. The regime acquired a clan-religious character. All the main posts in the army and special services were tightly controlled by Alawite.

Understanding the vulnerability of such a model of government, senior Asad tried to soften the structure of power by providing secondary posts in the party and government to people from other confessional groups. Thus, by the time he finished his career, the Syrian elite was a rather motley ethnoconfessional conglomeration of forces, the core of which was justly considered Alawite domination.

This could not but cause dissatisfaction with the 60-percent Sunni majority, no matter how hard the Alawites tried to give the regime a national scope. However, the Sunnis grumbled without much rage. With all the contradictions, the regime turned out to be incredibly stable! The deep traditions of eastern despotism have affected, the power vertical of the Alawite power has worked ... Moreover, Syria has traditionally remained a model of phenomenal religious tolerance for many millennia. In comparison with other countries in the region, this is simply striking.

Representatives of three monotheistic religions: Islam, Christianity and Judaism have been together here for centuries without conflicts. And flashes of religious radicalism were almost always caused by external provocations. That most violent Muslim Brotherhood uprising in Hama was caused not so much by the accumulated discontent of the Sunni circles as by the subversive activities of the Western special services through the Egyptian headquarters of this radical and militant Islamic organization.

The policy of Hafez Asad relatively quickly produced brilliant socio-economic results. The centralized public sector, which saved the population from poverty, was successfully combined with freedom of movement and entrepreneurship for local (mostly Sunni) small and medium-sized businesses. In fact, it was a model of socialism with a human face. As part of the official ideology, people were free to travel around the world. Learn, trade, cooperate ... And at the same time, they lived in Syria safely. A simple example: when the senior Asad government retired in 1980, when I had a chance to work for several years at the Soviet embassy in Damascus, 6 – 7 killed an average of 14 million people per year. And at least half of the criminals managed to catch. They were publicly hung in bags on one of the central squares of Damascus ...

Perhaps, Syria was in those years one of the most socially safe countries in the world. Talking about monstrous repressions, secret dungeons of the Syrian special services is nothing more than a common imitation for propaganda. Every state has an obligation to protect itself from internal and external enemies, and violence cannot be avoided here. If an individual can and should even be gentle, good-natured, then no state can be such, because by its very nature it expresses the people's collective will to survive and defend themselves. From this point of view, the Syrian regime was no more dictatorial and repressive than any other regime in the Middle East.

The second of Asadov, whom I happened to know, is Basil, the eldest son of the president, and his fate, in my opinion, carries with it a tinge of wisdom. Initially, the elder Assad planned to transfer power to him. Even when I was in Syria, Basil Assad managed to become a general of the Syrian army and successfully developed a political career. However, in 1994, in 32, he dies in a car accident on the way from Damascus to the international airport. According to my impressions, Basil had a rather quick-tempered disposition and a penchant for sharp actions. Could he withstand the enormous psychological, intellectual and emotional stress that lay on the shoulders of his brother Bashar during the Civil War and Western aggression, which continues today?

From this point of view, the advance of Bashar al-Assad from historical The shadow looks optimal. Possessing an outstanding erudition and high-quality education obtained in Great Britain, flexibility of mind and perseverance of character inherited from his father, being both a philosopher and a warrior, the third Assad managed to adequately replace the great Hafez fifteen years ago as the leader of Syria.

An important difference between the two is that the son happened to throw off illusions about the West, which the elder Assad still fed. If Hafez Asad, preferring an alliance with the Soviet Union, professed the idea of ​​equidistance, Bashar, having lost the Soviet “umbrella”, fully felt all the “charms” of the western attitude towards vulnerable countries and peoples. All the hypocrisy of the ex-colonizers. It seems that in the person of the current president of Syria, Russia gets a much more reliable strategic ally than the senior Assad ...

If, as a result of the interaction of the regular Syrian troops with the Russian HQs, in the next year or two, it will be possible to completely clear the country of terrorists of various stripes, then Bashar Asad, as the winning hero, behind whose back will be an experienced and well-armed army, can form a new military-political bloc in the Middle East, to which not only Iran will join, but also Kurds, Palestinians, Jordanians and a number of other participants in the Middle East conflict, dissatisfied with both the West and the "fat cats" Persian Gulf. What is very important, this new axis will be based on Russia's constant military-political presence in the region, the beginning of which was laid by the creation of our air base in Latakia and the appearance of our ships in the water area of ​​Baniyas, Tartus and the same Lattakia.

Mass media attacks on Bashar Assad, under the far-fetched pretext of its anti-democratic nature, cause nothing but laughter. Thanks to a series of serious political transformations, the younger Asad managed to really expand the rights of all the main political and confessional groups of Syria. On his example, we can be convinced that the most optimal way to democratize any Eastern tyranny is not a violent invasion of the historical process, but a bet on the natural continuity of power, as a result of which more moderate and tolerant sons change their fathers.

Exactly the same fate awaited the regime of Saddam Hussein in Iraq and Muammar Gaddafi in Libya. But the West, interrupting the natural process, not only failed to achieve the declared result - the democratization of these societies, but also plunged them into the bloody chaos of collapse. For decades to come, the very possibility of restoring statehood and order there has been buried. In the case of the removal of Assad - and in fact insists on this the US administration! - The same fate awaits Syria.