And the walls have "ears." The story of one invention and one betrayal

December 13 2015
39
5 December 1991, during the reception at the US embassy on Novinsky Boulevard, the chairman of the Inter-Republican Security Service (as the democrats who came to power called the KGB) Vadim Bakatin handed over the wiretapping scheme to the American ambassador Robert Strauss in the new embassy complex. 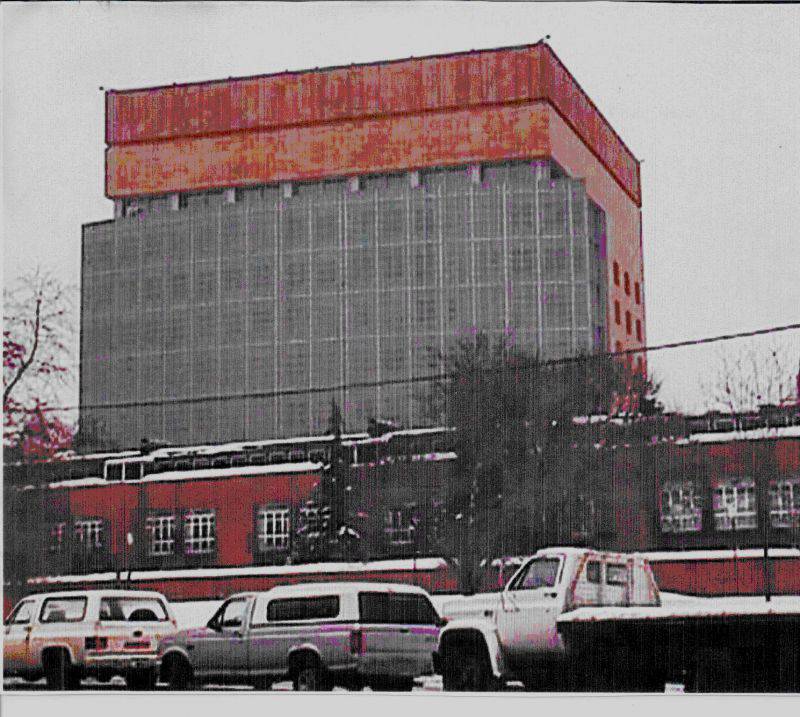 New building of the US Embassy in Moscow
However, the scheme - said too softly. It was a whole package of top secret documentation (at least 70 sheets) about the system of listening devices and how these devices work. Strauss is said to have stood for a long time with such a soulful generosity of the Russian minister.
Of course, after a series of demarches with unilateral reduction of missiles and other concessions, the Yankees were not surprised at anything. However, so that the head of the security service of one state would transmit, like a spy, secret documents to a representative of another state - such stories secret wars and diplomacy has not happened.

Bakatin himself subsequently tried to justify his betrayal by the fact that the wiretapping scheme, they say, was outdated long ago and the Americans, they say, calculated it themselves. Therefore, the act of transferring technical documentation has not caused any damage to the security of Russia and can be viewed as an expression of goodwill and a desire for mutually beneficial cooperation.

Someone may have believed this nonsense, but not the experts. First, no mutually beneficial cooperation followed this act of goodwill: the Americans did not give out their secrets and were not going to give out. And secondly, the wiretapping system of the American embassy in Moscow was so perfect that it would take Americans more than a decade to fully compute the whole scheme and understand the meaning of its work.
Therefore, all the normal compatriots regarded Bakatin’s gift as an unprecedented in their scale and cynicism betrayal of their country. 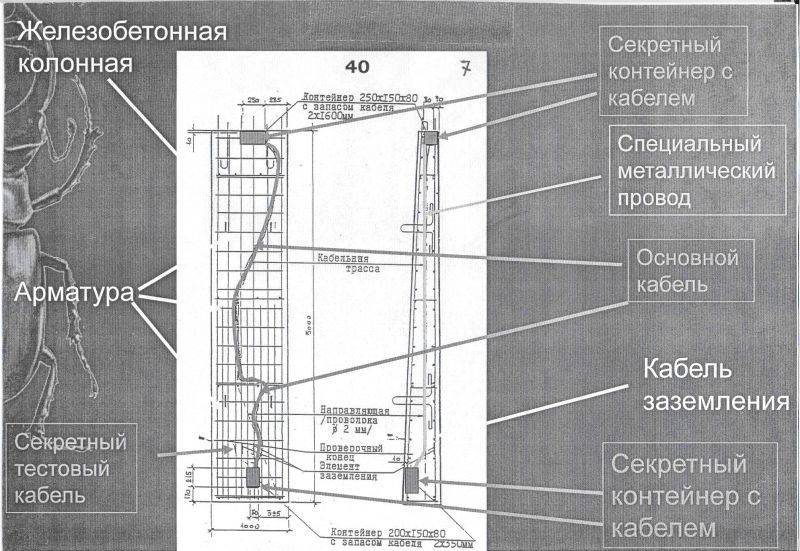 Scheme of wiretapping in the building of the US Embassy. Bakatin gave 70 sheets of such documentation to Americans
And now a few words about the audition itself. If someone thinks that the KGB craftsmen poked "bugs" into the walls of the embassy building, they are deeply mistaken. The fact of the matter is that no one poked any “bugs” anywhere. The essence of this unique system was that the role of the listening device was performed by the materials themselves and the structures from which the new building of the American diplomatic mission was built.

Therefore, it was almost impossible to calculate exactly where secret information flowed from the embassy building. To do this, you would need to disassemble the entire building down to the supporting walls and floors. 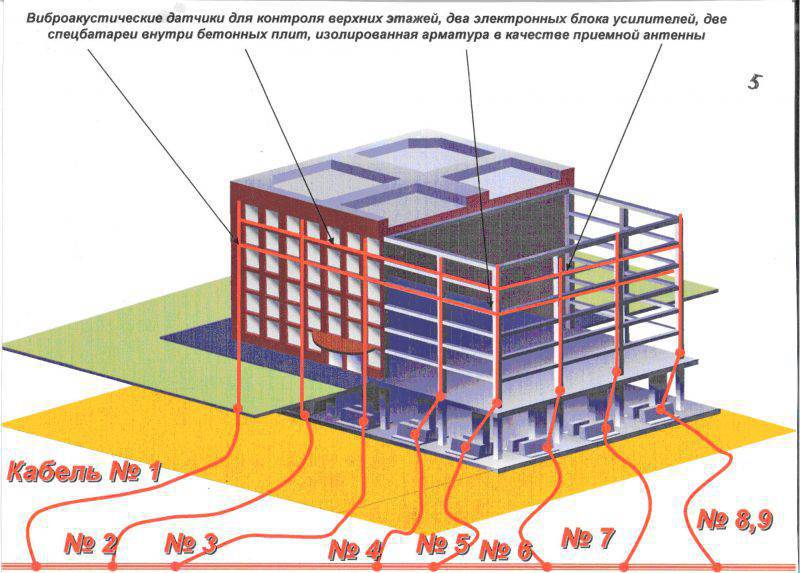 One of the authors and developers of this unique listening system is KGB major Vyacheslav Astashin. At the end of the 1970s, this talented inventor headed the department in the Design Bureau of the special equipment for providing intelligence and counterintelligence activities by the KGB of the USSR. Under his strict guidance, already at the design and construction stage, the embassy building systematically began to resemble a gigantic microphone working for receiving and transmitting secret information.

At the beginning of 1990, Vyacheslav Astashin, unable to survive the general collapse and chaos, died a relatively young man - he wasn’t 60 years old. It so happened that I am quite familiar with Vyacheslav's brother Vadim. So, he told a lot of curious details, which, obviously, at one time he was told by his brother.

The idea to make concrete “hearing” came to Vyacheslav at the beginning of the 1970-s, when he, a graduate of one of the leading technical universities of the country, was invited to work in the KGB. For several years in one of the KGB laboratories, Vyacheslav, together with a group of like-minded people, brought his invention to the mind. And there was a great opportunity to put it into practice: the Yankees decided to build a new embassy in Moscow. The architectural design was developed by the Americans, but the building materials and equipment had to be supplied by the Soviet Union.

This situation brilliantly took advantage of the Soviet counterintelligence. So, already at the stage of production of building materials, barely perceptible listening devices were mounted in concrete blocks and wall panels. Outwardly, they did not differ from simple construction waste, which sometimes gets into the concrete during its production. For example, in a homogeneous mass of concrete, suddenly a small black pea is found with a pinhead. 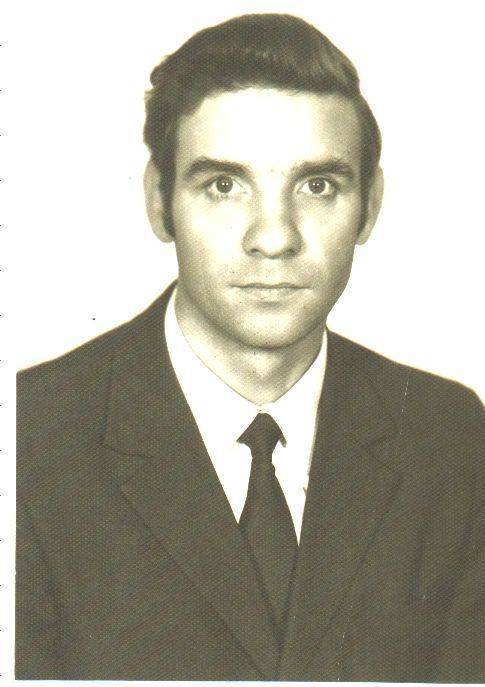 Vyacheslav Astashin, author and developer of a unique wiretapping system
Determine what it is, it is impossible to go: you need a special analysis. But even if it turns out that this black ball is not rubbish, but a skillfully made microphone, in fact it will not change anything. Because of such balls, cubes, sticks and other objects, which are incomprehensible at first glance, several thousand were built into the walls and beams. And each of these balls played a role in the general wiretapping system. Thus, the whole building turned into a huge microphone.

Moreover, natural processes used in any building structure were used as feed energy: vibration, circulation of heat and water vapor inside walls, etc. Not surprisingly, the special US Senate Commission, which analyzed the technical documentation carefully transmitted by Bakatin, concluded that the listening system installed by the KGB of the USSR in the new building of the American Embassy in Moscow is "the most complex and skillfully conducted reconnaissance operation in history."

Interestingly, shortly before his death, Vyacheslav Astashin, who had already retired by that time, was visited by some respectable gentlemen from the American consulate and offered to move to the United States so that, at a university, for very good money to work on their technical projects .

At the beginning of 1990, people from a free democratic Russia pushed the West to the west: artists and athletes, directors and politicians, traffickers and journalists drove to America and Europe for a beautiful life. Therefore, the Americans were confident that they would be able to easily reach an agreement with a Russian engineer who lived on a modest pension. Failed. After listening to the guests ’offer, Astashin declared that he wasn’t selling his Homeland, and put the Americans outside the door of his apartment ...

Ctrl Enter
Noticed oshЫbku Highlight text and press. Ctrl + Enter
We are
The last gift of the last KGB chairmanGorbachev. colleagues and accomplices. How to sell the USSR
Military Reviewin Yandex News
Military Reviewin Google News
39 comments
Information
Dear reader, to leave comments on the publication, you must sign in.