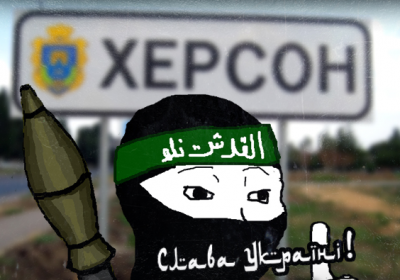 The ex-people's deputy of Ukraine from the Kherson region Zhuravko makes recently disturbing statements about a sharp aggravation of a situation in the small homeland. This area directly borders the Crimea, it was on its territory that the blockade of Crimea was launched by the Nazi-Bandera, the Crimean Tatar Majlis other extremists, and blew up high-voltage power lines.


Recently, the Turkish “gray wolves”, from the eponymous frankly neo-fascist organization with a large and bloody history. Reported by the assassination attempt on the Pope of Rome in 1981, now fighting in Syria. Some Western media believe that Turkish President Erdogan maintains links with the "gray wolves", uses them to crack down on his political opponents and kill activists.

They arrived in Ukraine at the invitation of the leader of the Majlis, the oligarch Lenur Islyamov, he himself told the media about this, along with a statement about the preparation of a “military operation” against the Crimea. Whether the sea blockade, or sabotage in the Kerch Strait. Near Kherson now deployed to 700 Turkish neo-fascists, apparently with experience of fighting in Syria. Already recorded cases of harassment of local residents, illegal checks, robbery and threats. Local security forces do not react, Kherson authorities are paralyzed by directives from Kiev ...

Zhuravko believes that Kherson will become a hot spot: the Majlis can proclaim the Crimean Tatar autonomy in the region with its own power and order, and the power component of the "gray wolves." Although the emergence of the Turks near Kherson itself suggests that in the Crimean Tatar environment the Majlis does not have a serious support, since it has to attract Turkish mercenaries.

With such unexpected consequences, the “civil” blockade of the Crimea threatens to result in the creation of the pseudo Kherson Khanate! With the power in the person of Islyamov-Dzhemilyov-Chubarov, and Erdogan behind them with the Turkish battalion of the Gray Wolves. Further, Erdogan can declare them Turkomans, and will have a reason for intervention. Of course, in the future, but the events on the Bandera Krajina are developing rapidly. A flag of "gray wolves" is already hoisted in the east of the Kherson region, while next to the yellow-blue.

This Turkish battalion does not pose a threat to the Crimea: a serious military group of Russia is deployed in the Crimea. To provoke Russia on the border with the Crimea is also unlikely to succeed. Conducting sabotage in the Crimea, which spoke Majlis and pravoseki? Retired military retirees who have retained ties with Russia on Kiev airs warn that the military in Crimea "will shoot without warning at saboteurs."

But to arrange pogroms "gray wolves" may well, which is what Zhuravko is afraid of. Especially if there is a destabilization of Ukraine. In impotent rage over the Crimea, Medzhlis leaders can recoup the Russian-speaking population of Kherson and Nikolayev. In addition, Turkish militants can be used to commit sabotage actions in Kiev, and in general throughout Ukraine.

There is also the danger of a major, really military provocation to the Mejlis, which Islyamov spoke about, but not in the Crimea, but in Kherson. For example, pretending to be Russian special forces from the Crimea, seize Kherson for the time being. Tell me, fiction? And Islyamov’s plans for the maritime blockade of the Crimea aren’t fiction? But for a provocation in Kherson, the Majlis now has military capabilities.

And although it will all be sewn with “white threads”, in today's propaganda frenzy Bandera Kiev will swallow it, as it is swallowed by the appearance of a Turkish, in fact, sabotage detachment.

This is what official Kiev thinks about when it looks through its fingers at the appearance of uncontrollable foreign forces in the rear? Does he think at all, at least for the near future? After all, the Turkish battalion can be easily used in Kiev Maidan!

It seems that the Majlis has a premonition of the collapse of the Bandera Krajina, and is preparing to grab a piece for himself. We must pay tribute to Islyamov: thanks to the hype with the blockade of the Crimea, the Majlis, in fact, acquired its own military force: the 700 fighters are a serious detachment, and it can prepare the deployment of more significant forces from Turkey. In fact, this is the vanguard of the invasion.

Recently Chubarov in the Rada declared that the Majlis had only suspended the blockade of the Crimea for two weeks. To resume the blockade, and may require provocation. Our military in the Crimea should look after the “gray wolves” across the border, technical means allow it.

... Khanate, not khanate, but provocation in Kherson and its surroundings is quite likely. As a gift for the New Year. They say if you feel the danger - arm!

Ctrl Enter
Noticed oshЫbku Highlight text and press. Ctrl + Enter
We are
Erdogan calls the Crimea Ukrainian, and considers Turkish? How Ankara refuses to recognize the reunification of the Crimea with RussiaRussia, Turkey and the "Crimean Question"
Military Reviewin Yandex News
Military Reviewin Google News
65 comments
Information
Dear reader, to leave comments on the publication, you must to register.