The project of armored repair and recovery vehicle BREM-3

December 18 2015
12
The advent of the armored repair and recovery vehicle BREM-1 made it easier to service the new main tanksheld by the Soviet army. Nevertheless, a significant number of obsolete T-54/55 and T-62 vehicles remained in service, which also needed similar technology. In the second half of the seventies, it was decided to develop a new ARV based on the T-54/55, designed to service old medium tanks. The project of a promising machine was called BREM-3.


The development of a new repair machine was entrusted to the 482 th design and technology center of the Ministry of Defense (Kiev). The task of the specialists of this organization was the creation of BREM on the basis of the T-54 tank arr. 1949 year with a set of special equipment. It was assumed that a promising machine would be able to pull out stuck armored vehicles, tow it to the repair site, and then provide various repairs, including those associated with lifting and moving large heavy loads. Thus, BREM-3 should have approximately the same appearance as BREM-1. However, in connection with a different base machine, a corresponding change in the existing technical solutions was required.

In the first version of the project BREM-3 proposed to use some of the proven solutions. In particular, it was necessary to apply the existing ideas concerning the layout of the aggregates. So, the base chassis of the tank had to undergo some changes. In front of it, it was proposed to place a single manned crew compartment, and on the site of the crew compartment it was necessary to locate an engine room with special equipment. In addition, it was proposed to install a set of various special equipment on the roof of the hull. 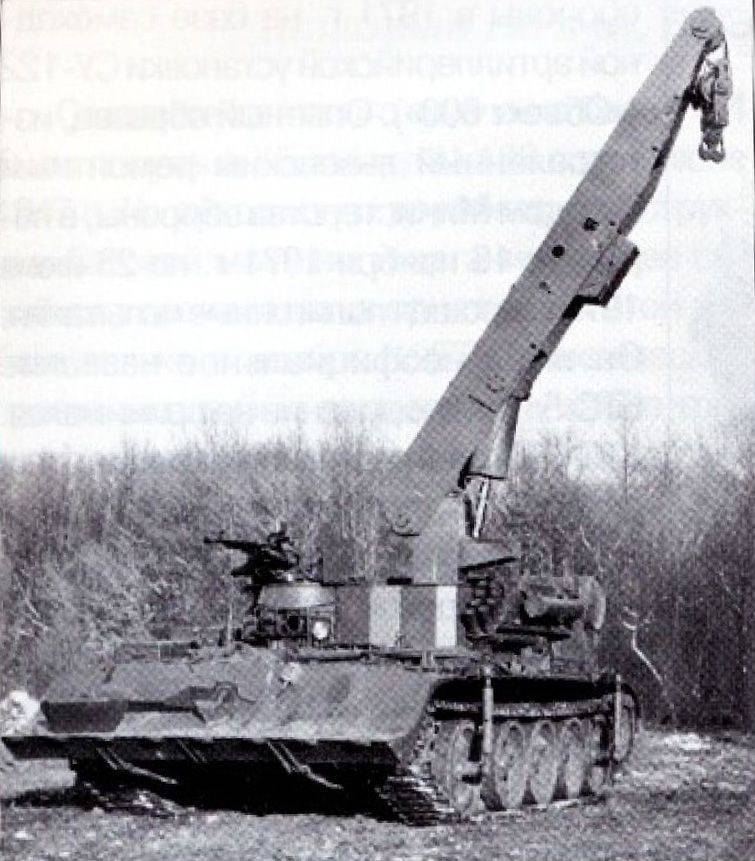 The first prototype is on trial. The boom of the crane is raised, locking mechanisms are installed on the undercarriage. Photo magazine "Equipment and weapons"

The BREM-3 hull was a significantly modified unit of the base tank T-54. In addition to the installation of special equipment on the roof mounted superstructure and some other details. After such changes, the body retained protection at the level of the base armored vehicle. Frontal projection withstand hits small weapons and small-caliber guns. Protection against modern tank guns with the appropriate ammunition was not provided.

For greater safety of the combat operation, the machine was equipped with anti-nuclear protection, thermal smoke equipment and smoke grenade launchers. Eight grenade launchers were placed on a common installation on the left side of the hull superstructure, under the base of the crane. In addition, the commander had an anti-aircraft machine gun DShKM.

As in the case of the BREM-1, the crew of the BREM-3 was to consist of three people: the driver, the commander and the rigging rider. Their jobs were located in the front of the hull in the general compartment. In this case, all the crew members had their own hatches with devices for observation. In addition, above the place of the commander there was a small turret.

A traction winch and some other equipment were placed in the engine room in the center of the hull. Feed, as before, was given under the engine compartment. For several reasons, the BREM-3 has received a modified powerplant, assembled on the basis of the aggregates of the T-54 tanks arr. 1949 of the Year and Later T-55. It consisted of a B-54 diesel engine with an 520 horsepower, onboard gearboxes of the T-55 tank and an input gearbox, borrowed from the BTS-2 tractor. Such a composition of the power plant provided a high degree of unification with the existing technology, and also allowed to achieve high performance. The chassis of the T-54 was used without any major changes.

Probably, the special equipment of the new repair and recovery vehicle was developed taking into account the previous project, which affected its composition. For this reason, BREM-3 received a coulter-bulldozer, a traction winch, a crane, a loading platform and a set of special tools. All this, as practice has shown, allowed us to perform the entire range of tasks. 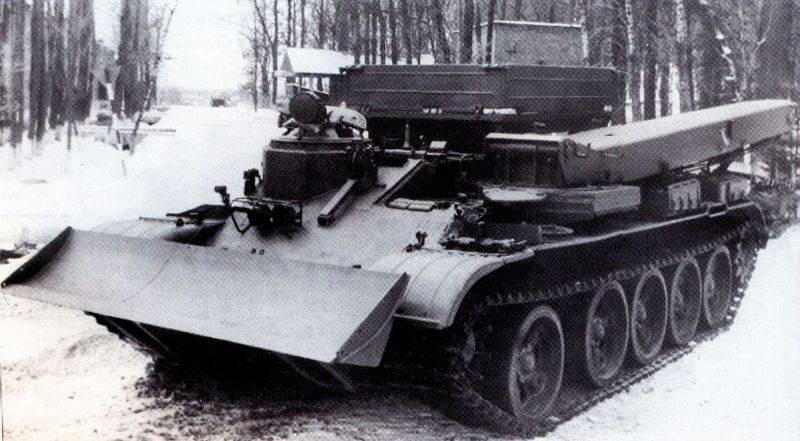 The second prototype, built on the updated project. Photo magazine "Equipment and weapons"

In front of the hull, it was proposed to mount a dozer opener with hydraulic drives. A coulter in the width of the entire armored vehicle allowed it to fasten in place when pulling out heavy equipment. Also allowed its use during excavation. A curious feature of the coulter was a mounting device on its front surface, with which it was possible to take in tow some relatively light objects.

In the engine room located traction winch, borrowed from the tractor BTS-4. This device was equipped with a metal cable length of 200 m and could develop traction up to 30 hardware. When using a chain hoist, the tractive force could increase to 100 mc. The traction winch was designed for pulling stuck vehicles, as well as for its towing over short distances. Its characteristics allowed to work with a number of armored vehicles with the appropriate combat mass.

On the roof of the base machine, on the site of the former combat compartment, a large superstructure was provided with fixtures for various special equipment. In the right front of this superstructure in contact with the commander's turret. To the left of the position of the commander was placed the turntable of the crane. It pivotally attached boom with a hydraulic drive. In the transport position, the boom was laid back in the direction of travel, and the two-hook hook was fixed in the corresponding loop at the rear of the car.

The crane allowed to lift cargo weighing up to 12 t and move it within a fairly wide sector. To expand the capabilities of the repair and recovery vehicle was completed with devices blocking the chassis. The road wheels of the front and rear pairs had elongated sleeves, and just above them, similar parts were located on the body. When mounted on the sleeves of the vertical stops, the suspension was locked, making it impossible to move the track rollers vertically. After that, BREM-3 could move on a flat platform, holding the load of a weight up to 10 t by crane.

In the stern of the hull provided for mounting for towing. This device made it possible to take damaged equipment in tow and take it to the place of repair.

On the roof of the superstructure was placed a cargo platform with folding sides. It was proposed to transport boxes of spare parts, tools, etc. on the platform. The total weight of the load on the platform could reach 1,5 tons. The transportable stock of equipment and tools allowed the crew of the BREM-3 to independently carry out some repair work. 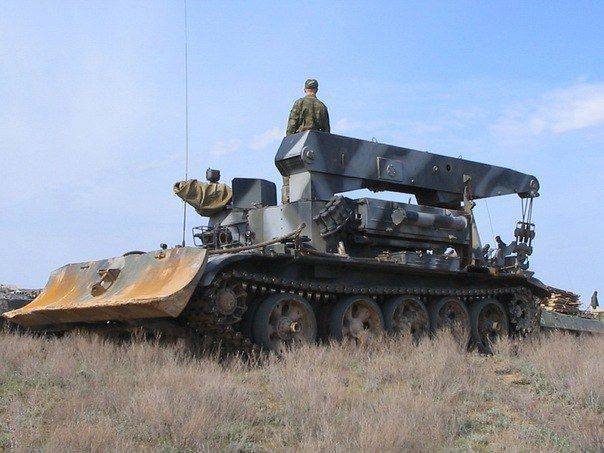 Dismantling the turret with weapons and installing new weapons did not lead to a significant change in the mass of the vehicle. Preserving the existing engine with a slight processing of the transmission allowed to leave the driving characteristics at the level of the base tank. So, on a dirt road BREM-3 could move at a speed of about 20 km / h. The power reserve reached 220 km. To increase the stock of fuel on the feed mounts, additional barrels could be installed. With a medium tank in tow (T-55 or similar), the recovery vehicle on a dirt road could reach speeds of up to 14-15 km / h.

Small water barriers could be overcome ford. To cross the deeper reservoirs, BREM-3 was proposed to be equipped with equipment for underwater driving. Its main element was a pipe-hole.

The design characteristics of an armored repair and recovery vehicle based on the T-54 tank made it possible to service the entire fleet of outdated armored vehicles, such as the T-54, T-55 and T-62. In addition, work with newer main tanks was not excluded. Special equipment BREM-3 allowed to pull out armored vehicles and tow it to the place of repair. There the crew could take part in the repair work.

The development of the BREM-3 project was completed in 1979 year. Soon the Lviv repair plant of the Ministry of Defense built the first prototype of this machine. He was sent to the tests, during which positive and negative features of the development were established. In general, the car turned out to be interesting and promising, but still did not fully meet the requirements of the customer. For this reason, the development organization was tasked with completing the project, and then submitting an improved sample for testing.

Over the next few months, the 482 Design Technology Center developed an updated version of the project. According to the test results, it was decided to use some new ideas, as well as significantly change the design of the main units. Thus, the power plant was reworked and built on the basis of aggregates of T-55 and T-62 tanks. Adjustments were also made to the hull structure: the upper frontal part was extended up and back, and the height of the commander's turret was reduced. In addition, the turret was separated from the superstructure of the hull. The setting itself, in turn, has changed its shape and size. In the habitable compartment there was an additional place for the repairman, who was supposed to take over some of the maintenance work on the damaged equipment.

The crane was moved from the front of the superstructure to a special reinforced section of the left fender. It can be assumed that the new crane was created on the basis of the corresponding BREM-1 aggregates or was borrowed from it unchanged. The new crane was different from the old one, envisaged by the original project, with a shorter length and a thinner boom profile. The main characteristics, however, remained the same. 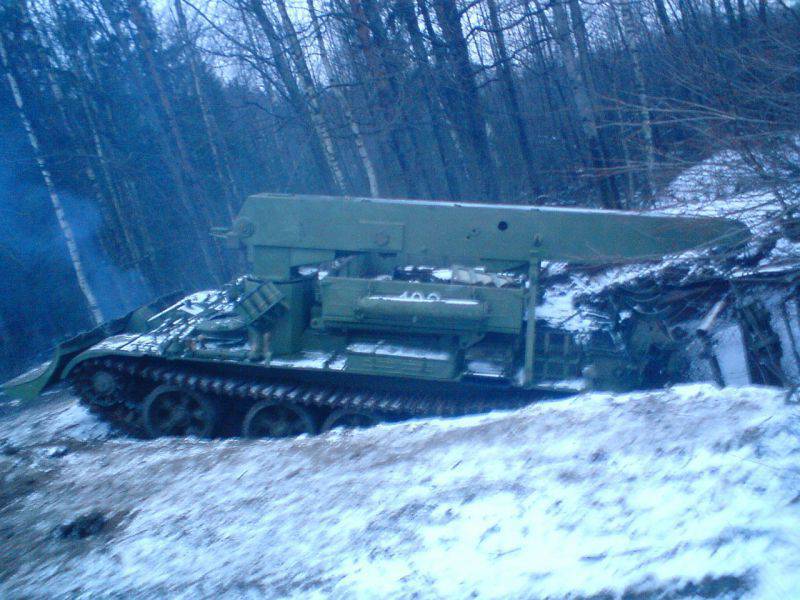 The updated BREM-3 has received an upgraded coulter-bulldozer of smaller height and reduced width with a smooth front surface, without fasteners. There were other changes. For example, there was no possibility of equipping the chassis with suspension lock mechanisms. Instead of a machine gun DShKM on the commander's turret installed a newer NSV of the same caliber. As a result of all the changes, the combat weight of the machine has grown to 38 t.

After all the improvements BREM-3 of the second version retained the basic characteristics of the base machine, and also met the requirements. A new version of the BREM tank T-54 / 55 was built in 1980, and soon came to the test. The second prototype showed itself well in tests, after which the BREM-3 machine was recommended for use. In the near future, the military department planned to launch a full-scale production of new equipment at repair facilities. It was assumed that the plants will receive outdated T-54 / 55 tanks, which, after repair and modernization, will be able to continue service in a new capacity.

For various reasons, mass production of BREM-3 has not begun. Moreover, there is reason to believe that the production of this technique was limited to two prototypes, although the construction of a small batch cannot be ruled out. There are several relatively new photos showing the first model BREM-3. Presumably, these photos were taken at the end of the last decade at the Kapustin Yar test site. It can be assumed that, as part of the tests, more than one prototype machine of the first version was assembled, but there is no exact information about this. The fate of the second prototype, built and tested in 1980, is unknown.


Based on:
http://russianarms.ru/
http://militaryarticle.ru/
http://vadimvswar.narod.ru/
Pavlov M. Pavlov I. Medium tank T-54 and vehicles based on it // Technique and armament, 2008. No.10