Are there traces in Chicago?

December 11 2015
27
This week, protests about the killing of a teenage negro by a policeman last year (with aggravating circumstances) resumed in Chicago. The townspeople did not like that the mayor of the city, Ram Emanuel, simply apologized for the slow investigation. According to the crowd on the streets, “too slow” work means that the police “cover their tracks.” And this despite the fact that the mayor had previously dismissed the head of the city police. 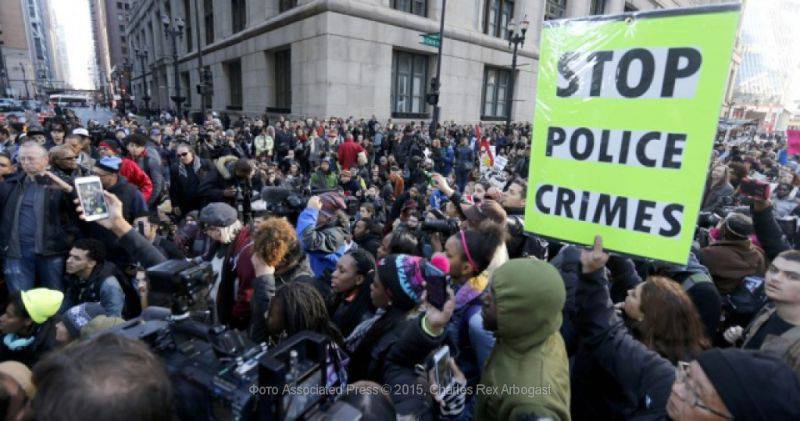 Recall the incident for which Mayor Emanuel had to apologize this week occurred in October 2014. Chicago policeman Jason Van Dyke killed seventeen-year-old African American Lacan Macdonald. The policeman claimed that he had to shoot, because the teenager allegedly threatened him with a knife.

The shot teenager was one of his school’s best students. According to journalists, its characteristics are extremely positive. The authorities of the city of Chicago had to pay five million dollars to the family of the deceased. This was done as part of the pre-trial agreement.

It is also known that US President Barack Obama expressed “deep emotion” after watching a video that depicts the killing of a black teenager.

RIA News" With reference to a CNN report, it reports a crowd that has gone to the streets of Chicago. Several hundred protesters chant: "Sixteen bullets and traces of traces!"

With a delay of a year, the city police distributed the video. The footage can be seen as a policeman shoots a seventeen-year-old teen Lacan Macdonald. RIA "News"Notes that the police have long resisted the publication of these frames. The record was made public only after the policeman who shot the police was charged with aggravated murder.

The mayor declared that he was responsible for what had happened. However, the march is not enough. "Ram, quit!" - cries the crowd cites the channel "Euronews".

As the correspondents reported from the USA TASS, protesters blocked one of the central streets of Chicago - Michigan Avenue. Mainly young people took part in the march, the agency reports citing CNN.

“Now many people are experiencing discontent,” one of the protest organizers told reporters. - In Chicago, it is very difficult for people with dark skin. We demand equality. ”

Another participant of the action stated that the reason for the speech was “accumulated anger and mistrust to the authorities”.

Locals do not believe in the sincerity of the words of the mayor and are afraid for their lives and the lives of relatives.

“Every time my 25-year-old grandson returns home from college, I think he can meet a racist cop on the way, and my heart goes to my heels,” he quotes. LifeNews retired Audrey Davis. - We should not live like that. The only thing I want to hear from the mayor is “I offer my resignation.”

On the course of the protests tells the Chicago press. Her reports fall into the top of the most quoted news "Google".

The site NBC Chicago published a video report from the scene.

Protesters believe that in Chicago there is a whole "culture of corruption", expressed in the "daily practice". In the corruption of the police involved and Chicago, and the city council and city hall.

The protests went until 17 hours on Wednesday evening; then marching began to disperse gradually. The number of demonstrators participating in the march, according to rough estimates, was more than 1800 people. About 200 of them gathered in front of the video cameras of the city council building and demanded to let them inside. Previously, protesters stood outside the city hall, demanding the resignation of Mayor Emanuel. According to them, his speech, the mayor will not be able to correct corruption in the police, taking shape for decades. Corruption, according to people, led to the death of 17-year-old MacDonald.

Bishop Tavis Grant, a representative of 38-year-old family of Philip Coleman, who died at the police station in Chicago (2012), believes that the current words of the mayor do not constitute a “real apology”. In addition, the mayor should have mentioned the tortured Philip. Grant said bluntly that protests could lead to unrest if the authorities did not demonstrate "constructive changes" that "lead to justice."

Newspaper "Chicago Tribune" writes about the “most severe crisis” in which Mayor Emanuel found himself.

Despite the mayor’s condemnation of the “code of silence” by the police, which encourages officers to cover each other, despite the proposal to increase “oversight of our policemen”, the protesters still want the mayor’s resignation. The protesters are convinced that the city authorities are involved in silencing the situation and hiding video frames from the general public.

“Nothing, nothing can justify what happened to Lacan Macdonald,” said Emanuel. - Our city has been on this road before. We saw footage of fatal police actions and other forms of abuse and corruption ... ”Then the mayor vaguely spoke about some“ corrective measures ”.

The agitated and upset mayor, notes the publication, “raised his voice” and even “pounded his fist on the pulpit”, speaking in the Chicago city council. In his opinion, the situation should "change." “No citizen in the city of Chicago is a second-class citizen!” Said the mayor.

Some direct listeners noted that Emanuel had never said anything like this before. And yet, even if these words are true, the mayor will still have to work hard to bring the city to change. Residents will be judged not by words but by deeds.

And here is another interesting fact.

Emanuel criticized the "code of silence" of the police, according to which employees cover the guilt of their colleagues. However, having condemned this practice, Emanuel noted that policemen often complain about witnesses: they refuse to testify. Citizens themselves must help the police: if the witnesses remain silent, the “code of silence” cannot be broken.

Many do not believe the mayor, consider his words chatter. The continuation of the protests until the evening is a sure sign that the discontent with the mayor has persisted. The protesters want the resignation of Emanuel.

By the way, we will add in conclusion, the protesters are also dissatisfied with the fact that the killer MacDonald a week and a half ago was released from custody on bail in 1,5 million. And the townspeople fear that this man will escape responsibility just as white police officer Darren Wilson, who shot and killed 2014-year-old black-skinned Michael Brown in Ferguson in 18, left her, left him.

Observed and commented on Oleg Chuvakin
- especially for topwar.ru
Ctrl Enter
Noticed oshЫbku Highlight text and press. Ctrl + Enter
We are
Situational analysis of the death of the MH17 flight (Malaysian Boeing 777), made on the basis of engineering analysis from 15.08.2014
Military Reviewin Yandex News
Military Reviewin Google News
27 comments
Information
Dear reader, to leave comments on the publication, you must sign in.