December 11 2015
45
German Chancellor Angela Merkel won in the nomination "Man of the Year" of the American Time magazine. Little did not reach the portrait on the cover of Abu Bakr al-Baghdadi, the leader of the militants of the Islamic State. Its ranking compilers placed in second place. Some experts call the inclusion of a terrorist in the rating of "immoral" act and "theater of the absurd." 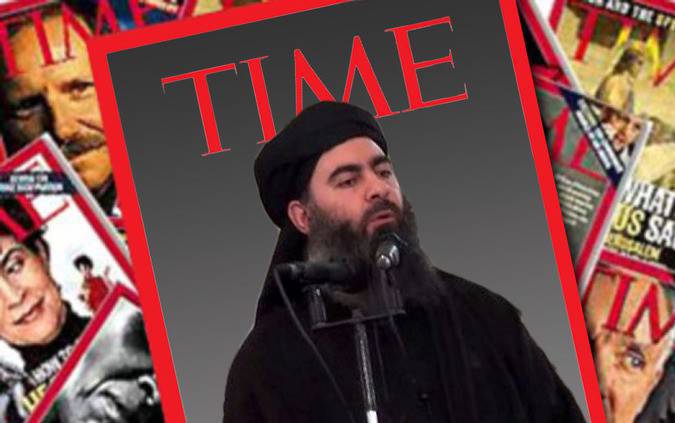 9 December, the editors of Time magazine called Angela Merkel "The Man of the Year." The selection criterion of the “Person of the Year” was defined in the twenties of the last century by Henry Luce, the first publisher of Time. "Person" is declared the person who most influenced the events of the year. And it does not matter what impact they have: positive or negative. Choosing a single winner - the prerogative of the editor.

Angela Merkel is probably associated in the USA with positive global influence. Experts note a number of its achievements: a decade as the German Chancellor; the first woman to head the German government; Finally, she comes from the GDR, and until now, people from this former socialist country have failed to rise so high in the general German state. The magazine also took into account that Angela Merkel was at the center of key geopolitical and economic events during 2015.

The policy of austerity in Europe, active participation in the “Norman Four”, dealing with the settlement of the situation in Ukraine, the policy of abandoning nuclear energy, attempts to resolve the migration crisis, while giving priority to “European values” - all these are different manifestations of the very same global influence which was also taken into account in the editorial "Time". In Germany itself, however, other achievements of Angela Merkel in resolving the migrant crisis are considered dubious; Moreover, other Germans, including colleagues in the party coalition, believe that Frau is the Chancellor herself and is to blame for the impasse in the refugee situation. However, not all Germans think this way.

According to public opinion polls dated mid-October 2015, notes TASS, A. Merkel's rating dropped to 45% compared to September. Some have lost popularity and the general block of the CDU / CSU. The next Bundestag election will be held in 2017.

More recent statistics refer to November 2015 of the year. To the question “Do you think that anyone could cope with current problems better than Angela Merkel?” 60% of respondents answered negatively. And only 20% of respondents believe that another politician would find the answer to the challenges of time more quickly.

Thus, it is impossible to say that the majority of Germans perceive the policies of Angela Merkel in connection with the migrant crisis negatively.

But what they write about the winner of the nomination in the original.

By the year of 2015, Merkel "has already taken place as an indispensable player able to cope with numerous debt crises in Europe," Nancy Gibbs writes in Time (cited "InoSMI"). - In addition, she played a leading role in the implementation of measures taken by the West in response to the gradual seizure of the territories of Ukraine by Vladimir Putin. Only recently, the very existence of the eurozone was threatened because of the possible bankruptcy of Greece. Because of the migration crisis, the principles of open borders have been questioned. And, finally, the bloody massacre in Paris caused a desire to retaliate - slam the doors, build walls and trust no one. ”

And here is the answer of the Angels: “Germany helped Greece - on its own harsh conditions. She received refugees as victims of the atrocities of radical Islamists, and not as agents of this Islamism. Germany also sent troops abroad to fight ISIS. For all the past 70 years, Germany has been trying in every way to find an "antidote" for its toxic, nationalistic, militaristic and genocidal past. Merkel offered a completely different scale of values ​​- humanity, generosity, tolerance - to show how the power of Germany can be directed not to destruction, but to salvation. It is not often that you meet a leader who is in the process of getting rid of a terrible national identity that has long been haunting the people. “If we start now to apologize for being friendly in an emergency,” she said, “then this is not my country.”

The decision of the editor-in-chief to “nominate” Angela Merkel as “Person of the Year” was irritated by some favorites of the US presidential race, who themselves would not mind showing off the cover of an authoritative publication.

Donald Trump in his "Twitter" wrote: “I told you that Time magazine will never choose me as the man of the year, even if I am a favorite. They chose a man who ruins Germany. ”

It is unlikely that the expressive billionaire Trump, who is about to become president of the United States, could tolerate such contempt for Time. Donald Trump in the world goes number one, then Donald Trump goes again, and Donald Trump once more, writes a German magazine with a little mockery Spiegel. And all these Trumps are the first. In any case, Donald cannot tolerate the choice of “Time”, who declared the Chancellor of Germany “Man of the Year” instead of him, Donald.

Time considers, according to Spiegel, that Merkel won a victory because they demanded more of their country than most politicians would have dared to demand. She opposes tyranny and she claims moral leadership in a world that demonstrates the complete absence of such leadership. The Chancellor is at the epicenter of the crisis, on whose resolution the fate of Europe depends. Thus, Angela is the "chancellor of the free world."

As for Trump himself, he was in the rating of "Time" only in third place. The editors replied about him rather unflattering. In particular, he was reminded that he could not apologize and did not apologize - even then, when he was completely wrong.

The German edition also reminds that the other day Trump called for a general ban on the entry of Muslims into the United States.

It is also interesting to know who got the second place in the lines of the Time.

This person turned out to be the leader of the Islamic State terrorist organization Abu Bakr al-Baghdadi. Refraining from assessments, Spiegel recalls that in 1938, Adolf Hitler was in the “people of the year”.

Russian experts, unlike Western ones, cannot refrain from evaluations. Still, Western tolerance is something very special, and in its full form in Russia, it will probably never take root.

"The recognition of Baghdadi is immoral," cite "Vesti" expert Vladimir Yevseyev. - It is not clear what the reason for this is, if this is simply not the theater of the absurd. The whole world is struggling with ISIS. ”

“Turkish ships, Turkish planes often transport fighters. I want to note that not so long ago, Turkish companies transported militants to Libya from Jordan, and it is there that Abu Bakr al-Baghdadi is now wounded in October, ”the expert added.

From the words of an expert, we add from ourselves, it becomes clear: by no means the whole world is struggling with IG. Some of the world even contributes to the movement of the leader of the grouping Abu Bakr al-Baghdadi, taking care of the integrity of his person. The other part of the world, in which Time magazine is just being published, apparently, the actions of the Turks and their collaborators secretly approve.

The Theater of the Absurd is that the United States would like Russia, and with it Iran, to be bogged down in a big war in the Middle East. Russia, which the West has fully managed to turn into a trade and raw materials appendage in a quarter of a century, is now rather weak, and the “new Afghanistan” that Washington’s strategists are thinking of will weaken even more. In this sense, the geopolitical role of the main world militant named Abu Bakr al-Baghdadi is really difficult to overestimate. In fact, he participates in the preservation of the current world order, in which the White House “rules the planet”. And it is he who is satisfied with the problems with migrants to Europe who do not give rest to the nationalists Viktor Orban and Marine Le Pen. He also arranges bloody acts of terrorism and floods the Internet with violent videos of cutting off heads. Each mention of “IG” or “DAISH” is not only food for the press that is greedy for cruelty of the press, but also, in essence, propaganda of the group.

Give the first place to the bloody leader "Time" simply did not dare. In 1938, Hitler could still be put on the cover of an American magazine, although at that time he was considered the real enemy of democracy, but in 1939-1940. The Fuhrer became a completely sinister person, despite his dislike of the Bolsheviks. In 2015, the equally sinister person is Mr. Al-Baghdadi, whose actions are rightly compared to fascism. Now even McCain will not call him a “moderate opposition”.

In order not to overdo it and not to run into international criticism, the editors of Tayma put Angela Merkel in the first place.

Well, Mr. Trump has everything ahead. To get on the cover, he just needs to become the president of the United States. Next year. "Time" loves to print portraits of presidents.

Observed and commented on Oleg Chuvakin
- especially for topwar.ru
Ctrl Enter
Noticed oshЫbku Highlight text and press. Ctrl + Enter
We are
Results of the week. “Bambarbiya! Kiergood! ”The fall of the Syrian airbase Abu ad-Duhor. The longest siege of the civil war is over
Military Reviewin Yandex News
Military Reviewin Google News
45 comments
Information
Dear reader, to leave comments on the publication, you must to register.