Army will get new capping for projectiles

December 11 2015
86
As part of the ongoing modernization of the armed forces, it is proposed to supply not only new equipment and equipment. weaponbut also various aids. Recently it became known that the Ministry of Defense plans to switch over to the use of a new container for ammunition over time. Instead of the usual wooden closures, it is proposed to use for storage and transportation new boxes of the original design.


Deputy Defense Minister General of the Army Dmitry Bulgakov told about the plans to switch to a new container for ammunition. According to the deputy minister, next year the military department plans to begin the full-scale use of new closures for ammunition. In the foreseeable future, only some types of projectiles, etc. will be delivered in new boxes. products. New closures have already been tested and can now be used in the army.

D. Bulgakov also spoke about some features of the new packaging. According to him, new closures are made of modern materials, which in their characteristics are superior to wood. The main advantage over existing wooden boxes is fire resistance. The Deputy Minister of Defense explained that thanks to the use of special materials, the new box is able to withstand a flame for up to 15 ° C for 500 minutes. This will allow the fire brigade to arrive in time to the site of the fire and prevent the negative consequences of fire. Also, the use of new containers will increase the storage time of ammunition. When placed in storage, a new closure will last for 50 years. 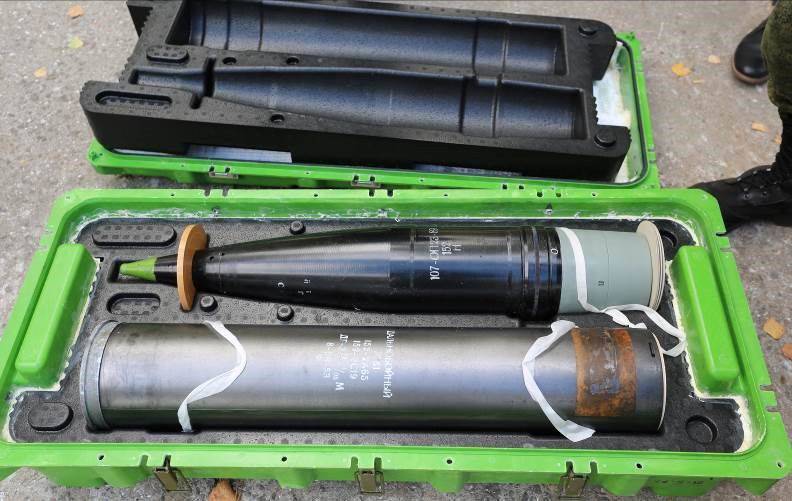 General view of a new capping with a projectile

By the present, according to D. Bulgakov, military tests of two types of new boxes have been carried out. The military checked tare for artillery shells of caliber 152 and 30 mm. The closures of the new type are recognized as meeting the requirements, which opens the way for the troops. According to the test results, it was decided to supply new 30 and 152 mm caliber shells in new closures.

Soon, photos of promising packaging for artillery shots of separate loading appeared in free access. As follows from these photos, when developing a new container, it was decided to create unified boxes with the possibility of relatively simple adaptation to a specific ammunition. To do this, the capping consists of several main parts: a unified box and lid, as well as inserts, lodgments, in which the "payload" is fixed.

The main elements of the perspective closure is a special plastic box of rectangular oblong shape. The dimensions of this product are designed so that it can fit various types of ammunition. Thus, the photographs show that 152-mm and 122-mm projectiles can be transported in boxes of the same size with different lodgments.

The main box and its lid are made of a special composite material, the type and composition of which has not yet been clarified. In discussions news There are various assumptions about closures, but they still have no acceptable evidence. Perhaps the new box is proposed to be made of fiberglass with special additives that increase strength and provide resistance to the flame. Thus, resistance to heat, including contact with open fire, is ensured, first of all, by the outer “shell” of the closure.

The outer box is made of two parts of similar shape, but of different sizes: the lid has a lower height compared to the main box. To increase the strength and rigidity of the structure, numerous protrusions are enveloped around the box and the lid. On the sides of the main box, notches are provided, which are proposed to be used as carrying handles. The box and the lid are joined to each other by means of a protrusion and a recess extending around the connection perimeter. In this case, the lid is equipped with a rubber seal, sealing the container. Between themselves, they are connected with a set of folding locks. On the long sides of the closure, three such devices are envisaged, on the short ones - two.

Inside the box and the lid are covered with a layer of fibrous material, which can be additional thermal insulation. Thus, the case of the box protects the contents from open fire, and the internal insulation prevents it from overheating. In addition, it is likely that thermal insulation plays the role of a compactor, which provides a more dense fit of the insert. 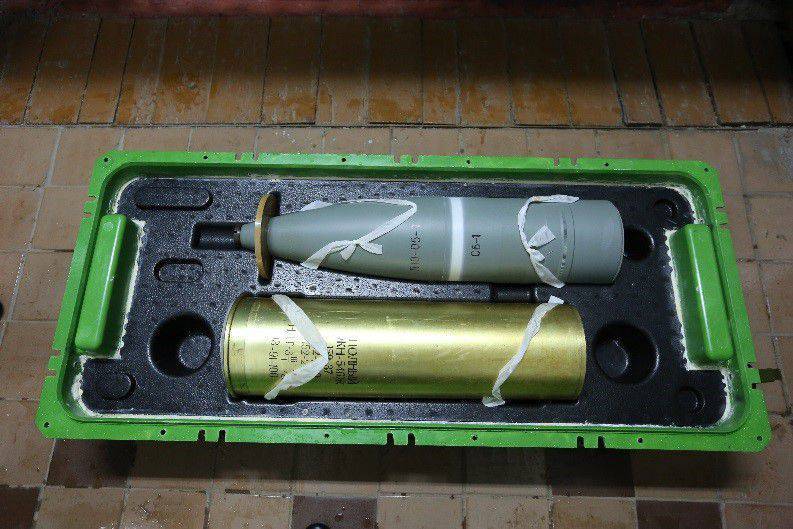 Another closure option for a smaller caliber projectile

For rigid fixation of the payload inside the new closure, it is proposed to use two plastic lodgments placed in the box and its lid. These products provide for excavations of appropriate shapes and sizes, in which the projectile and cartridge case or other products supplied to the troops should be placed. The closures shown in the existing photographs have a curious feature: on the “working” surface of their liners, next to the main grooves, additional grooves and protrusions are provided. With their help, the correct docking of the lodgements is ensured and their shift relative to each other is prevented.

Currently, there are versions of such products for several types of artillery shells, and in the future new modifications may appear with updated liners adapted to accommodate a different payload, up to small arms cartridges, hand grenades, etc.

The proposed closure design allows to successfully solve the main problems of transportation, storage and use of various types of ammunition. Durable plastic outer shell of the box provides protection from mechanical damage, as well as, unlike wood, does not burn and is able to withstand high temperatures for a long time. Sealing joints prevents moisture from entering the box and thus protects its contents from corrosion. Finally, there is an advantage in service life. Declared the possibility of using new closures for 50 years.

New plastic closures for ammunition should replace existing wooden products. For this reason, in numerous discussions of innovation, attempts are being made to compare old wooden and new plastic boxes. It turns out that in some cases new closures may indeed be better than old ones, but from the point of view of other features, they lose to them.

Perhaps the greatest interest is the abandonment of wood to meet the challenges of fire safety. Indeed, there are regular fires in ammunition depots, which result in the destruction of a large number of projectiles, as well as the destruction of buildings. In addition, many times during such events, people, both military and residents of nearby settlements, suffered. For this reason, the resilience of new boxes to the fire could be considered a very useful innovation, which, with certain reservations, may even justify the existing disadvantages.

However, the absence of any wooden elements in some situations can turn into a disadvantage. Devastated wooden capping for ammunition has traditionally been not only a multifunctional container, but also a source of wood. Wooden boxes can be used by troops to solve various tasks. With their help, you can build some objects, such as dugouts, trenches, etc., and the disassembled box becomes firewood. Plastic containers can be used for construction, but it will not be possible to warm up or cook food with it. 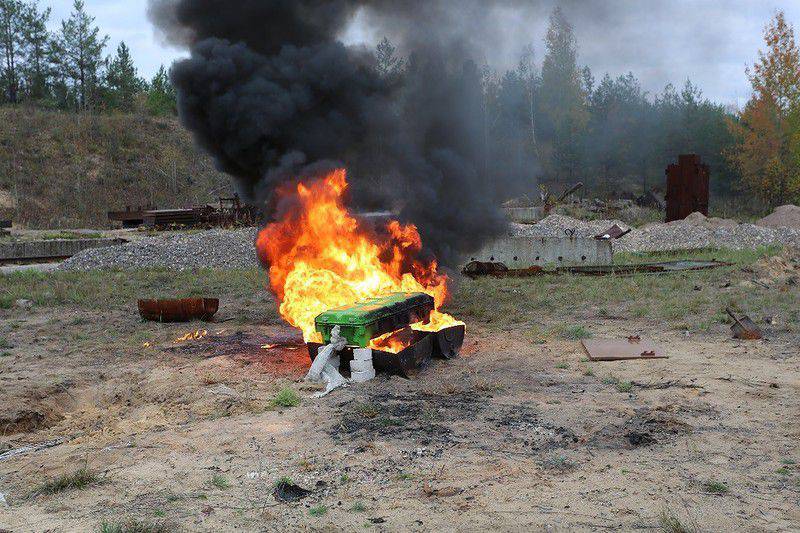 An important feature of the new closure is a lower weight. Due to the use of a relatively thin plastic casing and liners of similar materials, significant weight savings can be achieved in comparison with wooden packaging.

When evaluating new packaging for ammunition, it is necessary to consider not only the compliance with the requirements and some additional “consumer characteristics”, but also the cost. Unfortunately, at the moment information about the price of new boxes is missing. There is some information about orders for various packagings for the armed forces, but they cannot be directly tied to new boxes. Nevertheless, it is obvious that promising plastic containers should be noticeably more expensive than traditional wooden ones. How much is still unknown.

According to the statements of the Deputy Minister of Defense, this year, the troops checked two options for new closures. These products are designed for transporting 30 and 152 caliber shells. The tests were successful, resulting in the decision to use the new packaging in the future. Next year, the armed forces should receive the first batch of artillery shells packed in new boxes. In addition, there is information about the existence of capping for 122-mm projectiles, and the design of this product allows you to build boxes for other products. Thus, in the foreseeable future, new types of closures may appear.

According to the military, promising closures are fully compliant and will be available from next year. What will be the pace of deliveries of the new container and whether it will be able to completely replace the existing wooden boxes is not completely clear. Nevertheless, there is every reason to believe that promising closures can not only get into the troops, but also win back a noticeable place in warehouses from traditional containers.