Do I need to prepare for the fourth defense of the Crimea?

December 10 2015
69
Lenur Isleamov, already mentioned by me, the lackey of Medzhlis's figures of Chubarov and Dzhemilev, believes that it is necessary. That the struggle of the Crimean Tatar-Ukrainian people for the return of the Crimea to the bosom of Ukraine is just beginning.


"We have not retreated. We have entered a new phase", - says Islyamov.

“We were extremely surprised when French President Hollande threatened to lift sanctions on Russia due to the fact that we“ staged the border. ”Germany and even the United States of America expressed concern ... It turns out that our action in the world was perceived solely as violating universal human values ... "

Wow ... Militant baboon offended by the fact that everyone in his actions saw the actions of a monkey with a grenade. More precisely, with anti-tank mine. Even the United States (which is most disappointing) twisted his finger at his temple.

“Such a reaction of the world made it clear: our Western partners live in another, parallel world, where everything is normal, where the rule of law operates. We still live in another dimension. We just started to create our own country, our own power.”

The fact that in Ukraine the main galloping majority lives in another dimension, we all know for a long time. We know that "not everyone can look today in tomorrow. Or rather, not only everyone can watch. Few people can do it." I would say that we, normal, live in a perpendicular world. But god with them. What they will organize there in Ukraine is their business. But drooling towards the Crimea I care more.

"However, even if Rada gives the go-ahead to continue supplying electricity to the Crimea, the Demchishin-Aksenov-Putin contract remains for as many 15 days to go: it will expire on December 31. And we will be using all available methods to ensure that or it was concluded taking into account the conditions sounded by Dzhemilev and Chubarov: it must be concluded with the UKRAINIAN Peninsula. That is, with the Crimea as part of Ukraine. "

And just a year ago, it was completely sane person. Businessman. Truly, with whom you lead, so you need to. Apparently, sparks Dzhemilev brain can even peck out a rhinoceros. The perpendicular universe is present. With the Crimea as part of Ukraine ...

“We didn’t give up the plans of the naval blockade. Our headquarters are now actively engaged in the preparation of this operation. Still I can’t reveal the details - I’ll just say that it will be lightning-fast and extremely painful for those people who are now indulging themselves what is not suitable.

And here the world community does not bother us. We do not refuse the voiced plans - and gradually we will compress the ring. Here, shoulder to shoulder with us, are fighters from around the world. Are the patriots of Ukraine. There are more of us. So we'll see who wins! " 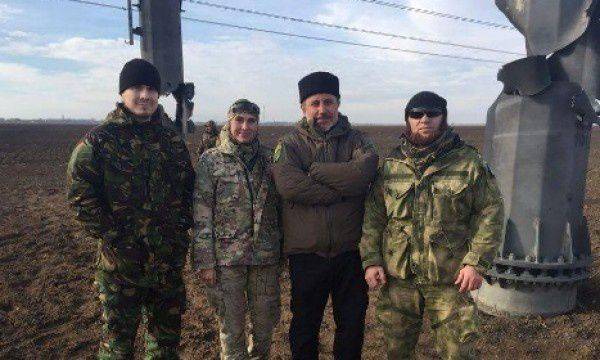 There is no point in commenting on the naval blockade, there is a clear mental disorder. Yes, and all the prospects of this "blockade" we have already discussed. But here on the "fighters from around the world" is worth focusing.

In confirmation of his words, he posted this photo. 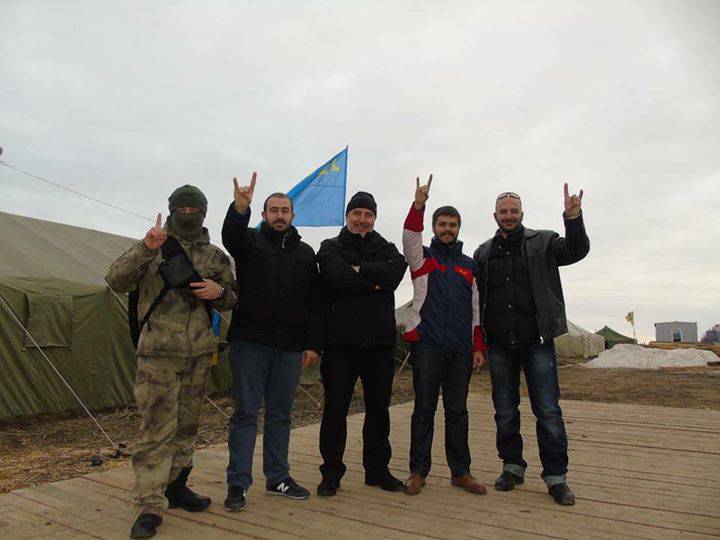 There are two versions here.

The first is that Islyamov took a picture of himself with the first non-illuminated characters and passed them off as representatives of the Gray Wolves. "Wolf face" put a lot of mind in front of the camera is not necessary. This only indicates that with the mental apparatus, Islyamov is getting worse day by day.

Probably, the arrest of his property in the Crimea had such an effect. That is how Aksenov and Poklonskaya reacted to his efforts to blockade the Crimea.

The second is the Gray Wolves. Then Islyam is just an idiot. Here I must say a few words about those whom he read to his allies.

“Gray wolves” (“Bozkurtlar”) appeared at the end of 1960 as the shock wing of the ultra-right “Nationalist Movement Party”, which proclaimed the goal of uniting all Turkic-speaking peoples in one state. It is clear that this state could only be Turkey.

The organizer of the "Volkov" - an open fan of Hitler and fascist ideas, Colonel Alparslan Turksh. On account of "Bozkurtlar" hundreds of crimes. They killed trade unionists, activists of the Kurdish movement, communists, objectionable journalists and officials. It is believed that more than a thousand civilians became victims of death squads organized by wolves in the Kurdish regions.

The Gray Wolves are active abroad. They staged an assassination attempt on Pope in 1981 year. Now they are cooperating with the terrorist underground in the Xinjiang Uygur Autonomous Region of China, considering it to be part of the “great Turan”. In August of this year, the "wolves" staged a terrorist attack in the capital of Thailand, which killed 19 people and injured 123. In Europe, "wolves" arrange mass rallies of the Turks, sometimes killing Kurds living in the Old World, desecrating monuments to Armenians and beating up Chinese tourists. Recently, the Gray Wolves have focused on recruiting people for the war in Syria on the side of ISIS.

The fact that now the former Crimean Tatar nationalists decided to cooperate with "Bozkurtlar" is not surprising. Moreover, against the background of the deterioration of Russian-Turkish relations. It is known that our pilot, who catapulted from the wrecked Su-24, was shot by the son of the leader of the Nationalist Renaissance Party and the Gray Wolves fighter Alparslan Celik.

But the most important thing is where the Wolves saw the Ukrainian Crimea in their plans. And will they risk their bodies for the sake of the idea of ​​the return of Crimea to Ukraine. The answer is one - they will not. The Crimea in Turkey is still called the “North Gate”. And even if they decide to test our Crimea for strength, it’s not for the interests of the Ukrainians. And the interests of the Tatars here are very doubtful.

Desperate step doomed? Quite possible. But it’s worth paying attention to this statement. The Bozkurtlar grouping has more than 50 years of experience in terrorist attacks and has always been supported by the Turkish authorities.

Therefore, whichever of the two options would take place, it would not be out of place to recall the words of a great man about vigilance.

Russia must be prepared for new actions against it. We are miraculously, thanks to the patience and solidarity of the Crimean people, and the selfless actions of the power engineers and the Emergencies Ministry employees have come out of a rather unpleasant stories with power drills.

Will there be more? Definitely will. And you have to be ready for anything.

And Islyamov should have been poisoned by the Turkish mandarin for a long time.

Ctrl Enter
Noticed oshЫbku Highlight text and press. Ctrl + Enter
We are
Energy blockade of the Crimea. Great damage to the economy and an attempt to genocide the populationSituational analysis of the death of the MH17 flight (Malaysian Boeing 777), made on the basis of engineering analysis from 15.08.2014
Military Reviewin Yandex News
Military Reviewin Google News
69 comments
Information
Dear reader, to leave comments on the publication, you must to register.