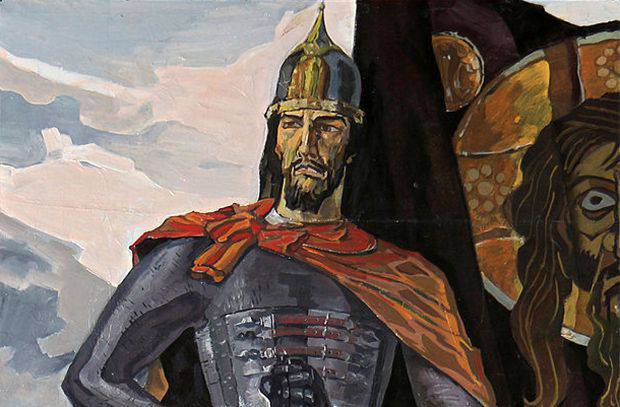 The Orthodox Church 6 December honors the memory of the holy Prince Alexander Nevsky. He entered history as the winner of the Swedes and the Germans and unsurpassed politician. Even in the Horde, where he was poisoned by his father, he conquered everyone - the eldest son of Batu himself adopted Christianity and became his named brother. All this did not prevent Alexander from dying to take monastic vows and leave the world in which he had accomplished so much.

The chronicle informs: before the battle on the Neva, where the Swedes had pulled together a large army, Prince Alexander had a vision. The prince doubted and asked for help from God - and suddenly he saw a boat on the water surface, and on it were the martyrs Boris and Gleb, dressed in purple clothes. The vision gave him confidence and strength. He launched an offensive decisively and utterly defeated the Swedes. After this battle, which took place on July 15 1240, the nickname Nevsky was fixed to him.

Two years later, the military genius of the prince will unfold in full force. Livonian Germans will approach Novgorod. Will seize Pskov, will plunder merchants. Alexander chases them to Lake Peipsi, and what happens next will be one of the most brilliant victories in Russian history. The prince will lure the German knights to the ice. Unable to withstand the severity of their armor, the ice will crack and the German army, armed with the latest, will go under water ...

He began to reign in Novgorod, when he was only nine years old. So decided the father, Prince Yaroslav Vsevolodovich. He left in the city of Alexander and his brother Theodore, who was only two years older. Yaroslav himself went to Pereyaslavl-Zalessky.

In 13 years, Alexander first tried his sword in battle. He went with his father on a campaign against the Livonians to fight near Dorpat together with his mother hardened in battles by the squad of Yaroslav.

At the time of victory in the Battle of the Neva Alexander - scary to think! - 19 years. A number of historians today express an opinion, they say, the significance of his victories is exaggerated. And the prince himself, according to them, was distinguished by a sharp temper: he was a little angry at Pskov and Novgorod, and cut off his tongues for offense and disobedience.

The “canonical” historians, Soloviev and Karamzin, categorically disagree with the first. Both, based on the annals, come to the conclusion: during the reign of Alexander in Novgorod, the raids from north to Russia stopped. Moreover, the Germans ceded even a part of their territories to the Russians (although they themselves had recently been stationed in Pskov) - we are talking about lands given under a peace treaty in Eastern Lithuania.

As for the second, here we must consider the behavior of Alexander in the context of historical events. In the south stood the Horde, in the north were the Germans, Lithuanians and Swedes. The specific Russian princes did not fetter themselves with morality: they sat down each other before the Khan, weaving conspiracies against each other. In these conditions, in order to maintain their positions, it was necessary to combine a diplomat, a warrior and a hard leader. All this, as history has shown, Alexander was able to do very well.

In 1247, Alexander, together with one of his brothers, Andrey, went to the Horde. They were going to decide which of them would reign. By that time, two important things had happened. First, a year earlier in the capital of the Mongolian empire, the city of Karakorum, Yaroslav, the father of Alexander, was poisoned. It was rumored that the wife of the new great khan did it: allegedly she gave Yaroslav a drink of water from her hands, and in the evening he fell dead and turned blue. Secondly, at the same time, Chernigov Prince Michael was executed in the Horde when he refused to worship the Mongol gods. 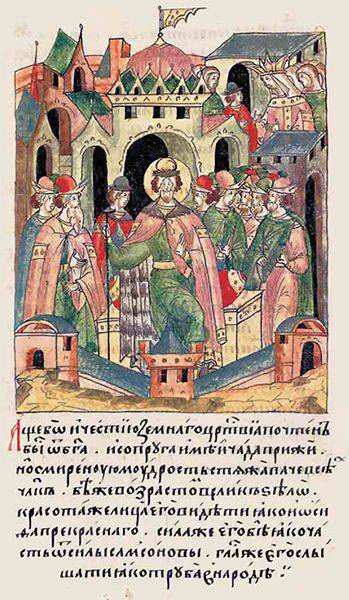 Image of Alexander Yaroslavich in the Facial Chronicle of Ivan the Terrible (Tsar-book). Photo: wikipedia.org
To put it another way, the trip to Alexander was tense: it was necessary to stay alive, get a princely label and not change your faith. The prince did all this with real art. Chroniclers later reported: Baty, who was sitting in the Horde, was conquered. “Everything that was said about him is true,” he told his nobles. “There is no more such prince.” From the Horde, Alexander went to Karakorum and eventually returned to Russia with a label on the Kiev principality (Andrei’s brother was determined to reign in Vladimir). In addition, in the Horde, he fraternized with his son Baty Sartak - according to legend, the prince converted him to Christianity.

However, some researchers believe that Sartak was already a Christian before the arrival of Alexander. It is believed that he professed Nestorianism: this trend was condemned at the Third Ecumenical Council in 431. Among other things, the Nestorians denied the term "Mother of God." Subsequently, Sartak will help Alexander: he will give an army to fight with his brother Andrew, with whom Alexander will have differences.

He will visit the Horde three more times. Every time it will be a journey on the verge of life and death. It will be necessary to go to the bow of the new khan (and, in fact, re-receive the right to reign, to win his confidence and try not to be poisoned), then to dissuade the Mongols from the new ruin (when in a number of Russian cities they kill Baskakov, tribute collectors). During these trips, Alexander, together with Metropolitan Cyril, his associate, founded the Diocese of the Orthodox Church in the Horde. And in between, they talked with the pope's legates - they planned to incline Alexander to the Catholic faith, and then stand against the Mongol-Tatars together.

The life of the prince answers: "We do not accept the teachings from you!".

In the 1263 year, during the last trip to the Horde, the prince fell ill. On the way back under Gorodets (historians have no consensus: was it Gorodets on the Volga or Gorodets in Ryazan) he died.

Life reports: before his death, the prince took monastic vows and received a new name - Alexy. At his funeral, says life, a miracle happened. When the metropolitan wanted to put a spiritual certificate in his hand, the prince allegedly rose from his grave and accepted the paper himself.

“Why did the victorious prince need monasticism at the end of life?” - this question was asked by many historians. Alexander's life answers this way: his whole life, starting with the victory on the Neva, was surrounded by the images of the saints and protected him - and only the princely portion did not allow him to become a monk before.

They began to honor Alexander Nevsky in the church immediately after death. But officially he was canonized only in 1547 year. This happened during the Council, convened under Ivan the Terrible.

Alexander Nevsky is honored as a patron of warriors. According to the chroniclers, his phenomena were observed during the Battle of Kulikovo and during the campaign of Ivan the Terrible against Kazan. Orthodox believers: the holy prince continues to look after Russia from heaven and protect her from enemies.