Khodorkovsky on an imaginary armored car ...

December 10 2015
96
Having received (through his father) a subpoena as accused of killing the mayor of Nefteyugansk Vladimir Petukhov (the mayor was killed on 26 on June 1998), Mikhail Khodorkovsky suddenly realized that he had missed "his move." If earlier the ex-prisoner, after pardoning the president, announced that he would never, never even think about political activities, was marked by publications about the “Kremlin regime” on an almost constant basis, then recently, as they say, he didn’t allow himself to snore, and missed the hook from the Investigative Committee of Russia.


The RF IC invites Mikhail Borisovich to visit a cup of tea for his supposedly entertaining story about why it so coincided that the mayor of Nefteyugansk was killed on the 35 anniversary of the “young and promising” MBH, and then the defendants pointed at the top YUKOS as a group of main customers for the murder of Vladimir Petuhov.

A scanned copy of the invitation was published by the ex-sideler himself. 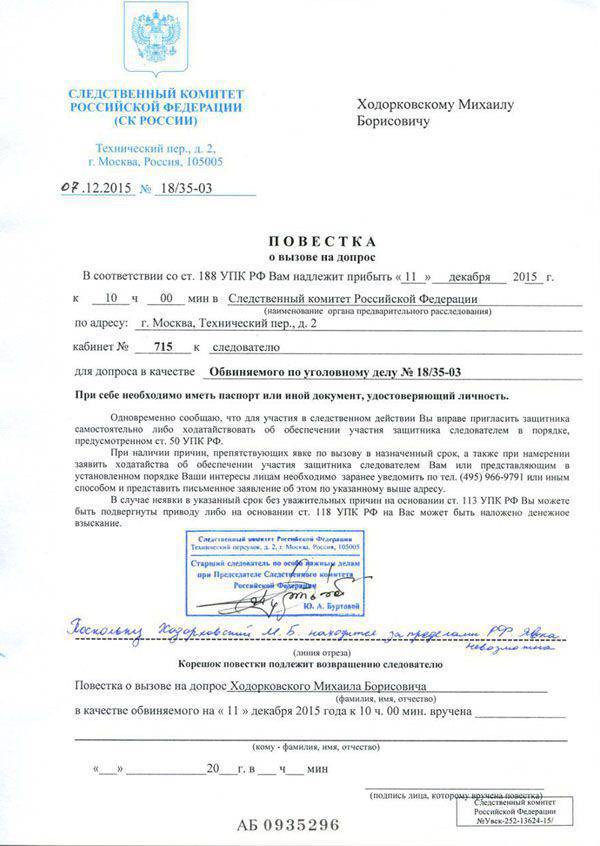 Posted with comment:
Father today dragged. As if my address is not known. I inform: Hanover sq. 16 A sad attempt to change the topic of discussion.

As you can see, the murder of a man for Mikhail Borisovich is the topic of "dull", and, therefore, an ordinary one ... They say it would be something to discuss ... Just think, murder ...

To answer the investigating authorities of Russia with his blow, if possible, “into the nine,” Mikhail Borisovich chose a favorite trick. The method is connected with the action of Khodorkovsky’s formula: you can’t justify yourself or at least give a clear answer to the accusations - call for non-compliance with the laws and for the revolution in Russia. Not ready to call - at least predict ... 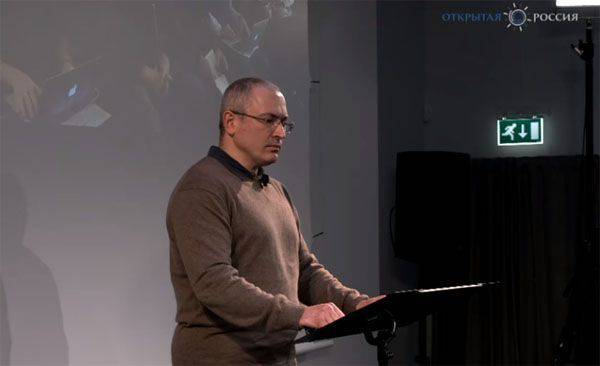 During his press conference, which MBH gathered precisely for the purpose of making a “missed move”, he said that, he says, for the third year in a row, Russia received “New Year presents” in the form of new charges, that neither personally, neither YUKOS has any relation whatsoever that the investigation itself is headed by Alexander Bastrykin himself, who was “recommended by Putin’s friends”. Having sent for all the details of those present at the “press conference” to Wikipedia, Khodorkovsky included his favorite record with the “compositions” in the modern arrangement.

From the speech by MBH (text taken from Khodorkovsky’s website) to grateful listeners outside Russia:
When I got out of prison and was sent abroad (this is news - it is sent, it turns out ... Well, if sent - come back, "dear friend" - approx. author), the situation favored them: huge reserves from ultrahigh prices for oil, friendly Ukrainian leadership, practically forgiven by the West war in Georgia, 30 rubles per dollar and, accordingly, no protests.

Only two years have passed, and what do we see now? Reserves end in 2017, and then only because the dollar was driven over 69 rubles. If such a devaluation had not occurred, the reserves would have run out earlier. The standard of living of the population fell by 20% and falls further. Habitual resting places have become unavailable.

Patience breaks through protests provoked by the pathological greed of Putin’s entourage. Truckers - this is only the first swallow.

With Ukraine is a military conflict. Thousands killed. And yet nothing is over.

With Turkey, the conflict between trade and normal war of value.

Western sanctions - they not only reduce reserves, but also freeze the technological backwardness of many industries. Young people, specialists choose to go abroad to continue their careers.

Then, clearly stung by that very agenda in the Main Directorate of the Investigative Committee of the Russian Federation, Michal Borisych gathered together everything he remembered: about the “remnants of the reserve”, about the “Chaek affair”, and about the struggle for the right to a peaceful picket, and about the “inner circle” Kadyrov ", and even, oh, horror! about the Russian mafia in Spain ... This is the scope: from Chechnya to the Pyrenean ranges. Well, isn't that a broad man, this Mr. Khodorkovsky? And then ...

The stormy speech of Michal Borisych led him to the conclusion that “the inevitability of the revolution in Russia”.

Understanding that after that they can invite him to a cup of tea in the RF IC not only in the case of the murder of the mayor of Nefteyugansk, but also on a new charge of calling for the overthrow of the constitutional system in the Russian Federation, the MBH, in its own way, was “reinsured” by announcing in advance that this, they say, now in Russia everything is completely unconstitutional, and he, he says, calls for a “peaceful and effective revolution” of a purely, of course, democratic sense. And what else? Was it Kiev Maidan was undemocratic? But whoever will say this, let him be the first to throw a stone at the MBH - MBH knows for sure: the stone will not reach its current place of residence ...

At the end of the speech, Khodorkovsky clearly needed at least a small armored car, for how can such words be uttered without an armored car:
Return to the legal field of such a situation is called a revolution. It is inevitable and necessary. Revolution is a good word. It can and should be peaceful. Making a revolution peaceful is our common task.

It seems that the phrase “revolution is a good word” launched a shoe into the screen (if, God forbid, the ex-sitter’s show was watching) baroness Irina Vladimirovna von Dreyer, the daughter of the Russian army general Vladimir von Dreyer, left Russia with her family 5 years and recently asked the President of Russia for Russian citizenship.

Irina von Dreyer (born 1915) in a letter:
I appeal to the justice and nobility of your Excellency in order to return me Russian citizenship for the anniversary, because I want to meet with the Creator not as a foreigner, but as a real citizen of Russia, Russian in heart and soul.

So, if Irina Vladimirovna, God forbid, heard that Khodorkovsky blurted out (otherwise you can’t say otherwise), who violated his own word and now declared about “returning to politics”, then I think I wouldn’t have regretted a strong wit to tell in colors to this subject, what revolution really means for Russia, and how much “peaceful” it is ...

Well, in the end of the MBH. One gets the impression that this is already a tradition: an individual who committed a crime, fouled up in his home country, and having a personal “candle factory” left over due to the absence of an article on the confiscation of property, at one fine moment suddenly wants to play with a stomach cramp, moreover, with the approval of the "friends of Russia" ...