How to beat Russian propaganda

December 10 2015
40
In February of this year, the media reported a great desire of Great Britain to overcome Russian propaganda. In particular, they talked about the TV channel Russia Today. At the end of November 2015, the content of electronic documents of British special services got into the network (authenticity is not confirmed). According to the files, the British almost two years ago developed an information war strategy against Russia. 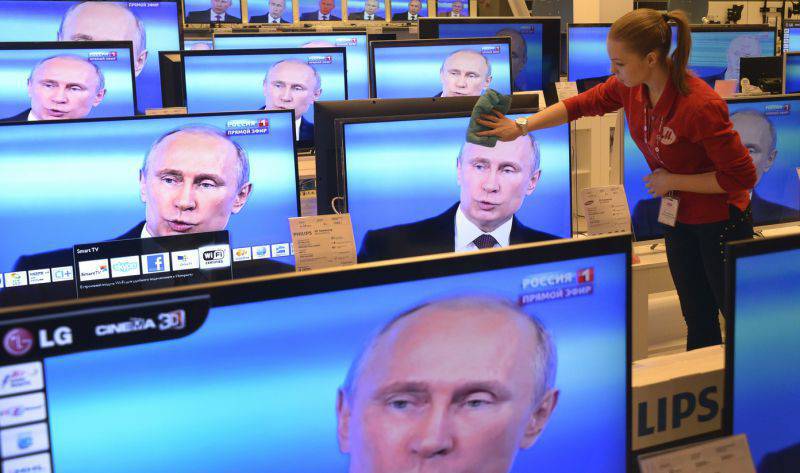 Recall in February 2015 of the year "Ukrinform" spoke about plans to fight "with anti-Ukrainian propaganda." Opposition should be directed to the Russia Today channel. At the forefront of the fight will be BBC World.

First-hand information, as they say: a correspondent from Ukrinform was told about this at the VIII Europe-Ukraine Forum in Lodz. And he announced the plans not to any outsider or anonymous, but a member of the British parliament, chairman of the committee on culture, media and sports, John Whittingdale.

“As chairman of the parliament’s media committee, I spoke with management News “BBC World”, so that they increase their efforts, possibly through broadcasts in Russian on the Internet, to create an alternative voice that will be true and will be a response to Russian propaganda. They assured me that this would be their priority, ”Ukrinform quoted Whittingdale as saying.

The British politician also noted that in the UK, the television channel “RT” has “significantly expanded” over the past six months.

“But what they show is pure propaganda,” said the Briton, “there is no impartial, objective and truthful information.”

And the Russians have achieved something: thanks to propaganda, many people in the UK now believe that eastern Ukraine is part of Russia. And the inhabitants of this territory should remain Russians.

Russian Federal Information and Analytical Agency Kremlin Press published material on the activities of the British intelligence services in the field of propaganda. It turns out that British intelligence agencies have long been forming and coordinating the work of anti-Russian media and the public. The goal is “an informational background about events in Ukraine and Donbass”.

About two years ago, a strategy of the information war against Russia was developed in London. British intelligence, according to the Kremlin Press, shared its electronic plans with Valentin Nalyvaychenko. From the flash drive, someone copied the data. And now they have “surfaced”, despite the “top secret” vulture.

The document entitled “Strategy for Russian-Ukrainian Relations on 2014-2017” set the following goal: to set Ukrainians to join the country in NATO and the EU, to preach the need for European reforms, and also to “reduce the impact of the Kremlin’s disinformation campaign”. The solution of the latter task was accompanied by a detailed methodology: it was necessary to highlight in the information space of Ukraine the themes of "Russia's military presence in Ukraine", the death of "Russian soldiers" in the "undeclared war", "the growth of international isolation of Russia", etc. Sterling. Program partners: EU, NATO, British Council, BBC, scholarship programs of the British government.

It is also reported that in December 2014 of the year, commissioned by the EECAD team (team of the Directorate for Eastern Europe and Central Asia at the British Foreign Office), William Robinson and Camilla Fening prepared a report entitled “Occupying the Russian-speaking world”. The document contains tips on waging information warfare on social networks and propaganda in the context of the Russian-Ukrainian conflict. In the introduction to the document, the main goals are presented: "reducing Russia's influence on Europe" and "preparing an alternative future for Russia."

“As employees, the developers recommend the British Embassy in Moscow and EECAD in London to allocate 20% of native English speakers (C4 knowledge level) in the field, as well as 10% of Kiev residents who know English at a conversational level (B3). The work will continue to boil, the authors of the report explain this by the fact that Russians live in nine time zones (by the way, this is one of the risks). ”

In addition, William and Camilla warned the Directorate of the Ministry of Foreign Affairs: during activities in the social networks "Vkontakte" and "Classmates" accounts can be attacked by a professional army of "trolls" guarding the information space of Russia under the auspices of the Kremlin.

It was planned to conduct informational struggle in three stages: 1) create accounts in social networks; 2) evaluate the response to neutral messages; 3) go to the immediate implementation of the plan. In the main phase, the goal is to “neutralize Russian propaganda”.

“It’s easy to see the fruits of the activities of British diplomats,” writes the author of the article on KP, Alexey Tumanov. - It is enough to use any search service, and for each thesis more than one hundred thousand related news can be found. Mostly Ukrainian media.

Blaming Russia for all the sins of propaganda, from the vigorous activity of “RT” abroad to the around-the-clock factory of the Kremlin trolls, the British politicians themselves launched a whole campaign of lies in Ukraine. The essays on the “military presence of Russia in Ukraine”, the death of “Russian soldiers” in the “undeclared war” and “the growth of international isolation of Russia” written for freely convertible currency by hired strokes are a good example of how enlightened London relates to Moscow. On the lines themselves and say nothing. Money does not smell!

Observed and commented on Oleg Chuvakin
- especially for topwar.ru
Ctrl Enter
Noticed oshЫbku Highlight text and press. Ctrl + Enter
We are
"Army-2015". "Military Review" on the forum. Announcement of reportsResults of the week. “And this gentleman is a member of the bazaar society, he sells souvenirs, you see, who will cheat”
Military Reviewin Yandex News
Military Reviewin Google News
40 comments
Information
Dear reader, to leave comments on the publication, you must to register.